No pool? No problem 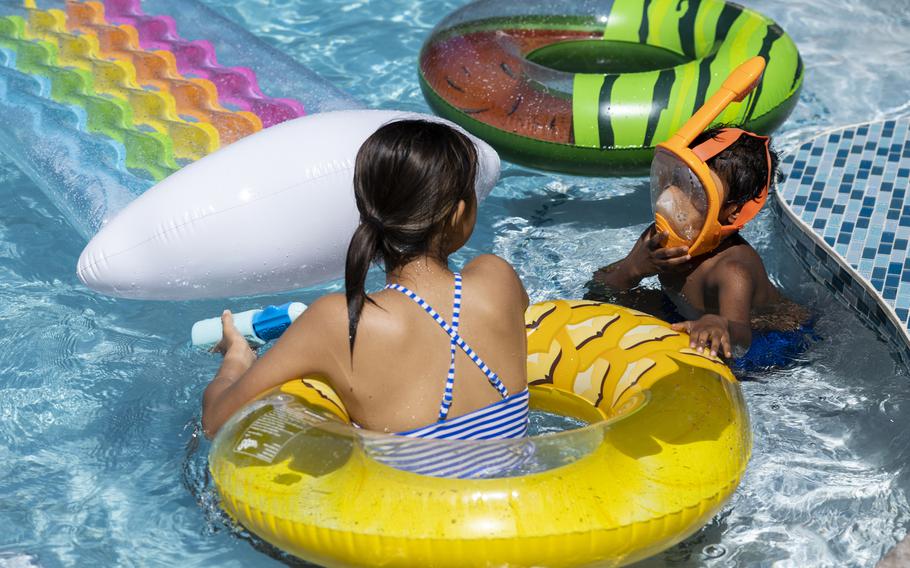 Mabel Qiu, 16, swims with Sudhan Varam, 5, in Karl Tradewell’s pool, which her family rented through Swimply in Paoli, Pa., in July. (Rachel Wisniewski/For the Washington Post)

On a cloudless summer morning, a begoggled Rong Wang paddles in the backyard with her husband and two children among a flotilla of floats. The speaker sparks tunes; watermelon chills in the cooler. Their friends, the Varams, arrive and plunge right in, eight swimmers splashing about in the 80-degree water.

“There’s nothing better than this,” says Wang, 49, an information technology director. “It kind of feels like our pool.”

It’s Karl Tradewell’s baby. Where others see 25,000 gallons of clear salt water shimmering in an azure kidney-shaped vessel, Tradewell sees opportunity. Also, revenue — $68 an hour or more on weekends depending on the number of guests. Last summer, the Paoli, Pa. resident began listing his pool on Swimply, the Airbnb of aquatic recreation: “Mainline Paoli Pool Party/Vacation for the day.” The two families split the $140 fee for a two-hour frolic.

Tradewell, 40, a biotech recruiter, has never again viewed his pool as his alone because humans cannot swim every moment of every day, no matter how great the desire. Indeed, for far, far too many hours, these shimmering blue idylls go tragically unused, so much still water, barely producing a splash.

“I’m very business minded,” Tradewell says, watering his immaculate yard while Wang and her family swims. “They don’t have the enjoyment in their own backyard. Why not share?”

This Sunday in early July, the pool is rented three times, from breakfast until after the sun sets. The day before, Tradewell hosted a birthday bash for 25, and banked $500. It was for 5-year-olds, not a college frat. Tradewell is not that generous — or foolish. He’s mindful of whom he rents to. Like 80% of Swimply hosts, his bathroom is available for guests — a smart thing with a throng of kindergartners. For $35 extra, folks can rent the grill. Instead of an innkeeper, Tradewell has become a pool keeper.

Observe the new $5,500 heater tucked behind the tasteful landscaping. Rentals paid for that. (It’s $15 an hour extra for heat.) He’s booked the pool 45 times this summer and August has yet to swelter. Wang and husband Jason Qiu have already rented three times, and booked again for next month. 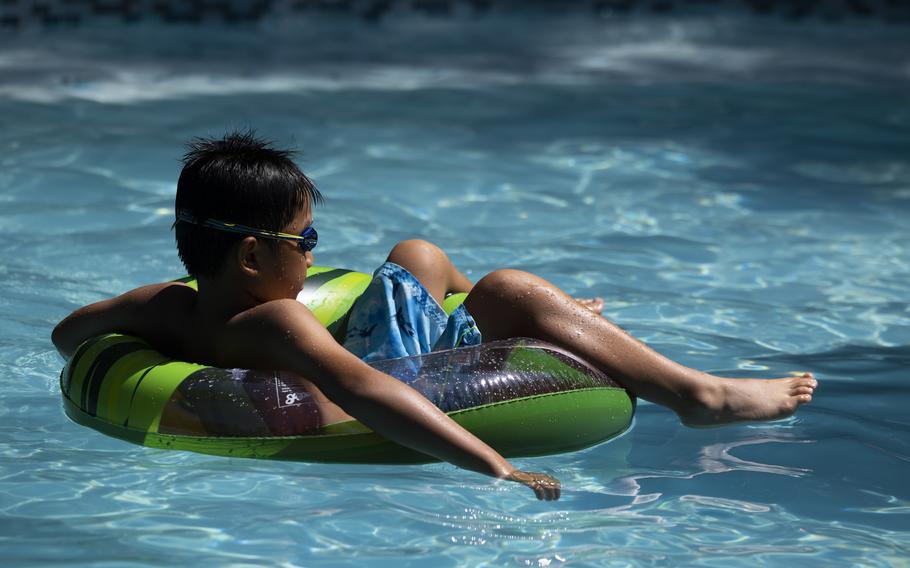 Taylor Qiu, 11, lounges on a pool float. The average price to rent a pool on Swimply is $45 an hour. Taylor’s family rented the pool for $140 for two hours, split with another family. (Rachel Wisniewski/For the Washington Post)

Does Qiu want his own pool? The 47-year-old software engineer gives a look as though he’s been doused with ice water. Never.

“I don’t want the responsibility,” he says. “This is a win-win for us.”

Summer separates those who melt from those who float, the sweat-drenched from the habitually chlorinated, the hot-and-bothered from the cool-and-collected, we poor schmoes afflicted with profound pool lust and those fortunate few flush with chlorinated water.

During this moment when everything is for rent, you, too, can borrow a pool and a dream, adopt a stranger’s lifestyle and co-opt his or her backyard, an hour or two at a time.

Cool, you may say. Literally.

It is a sad, sweltering, sobering truth that only 8.7 million fortunate American homes are graced with pools, and merely 5.4 million of them with an in-ground baby, the Shangri-Lap of backyard delight.

Now, we, too, can be positively poolish, fleeting lawn tourists and voyeurs in a stranger’s aquatic Eden.

“An absolutely genius move,” says Liz Jaff, 37, a Washington political consultant and freshly minted mother. On a Friday morning in June, she and a friend and the friend’s baby booked a pool within hours. The babies frolicked on the lawn; the mothers frolicked in the water. “It felt like a completely spontaneous vacation.”

Granted, Jaff notes, “it is weird to go into some random somebody’s backyard.”

Indeed, it is. Wang says exactly the same thing. What do renters know about the owner? What do owners know of their guests? In a time of diminishing trust, it’s weird — until it isn’t.

Consider the acres and acres of fences and hedges, often erected at considerable cost to transform a yard, and certainly a pool, into an owner’s sylvan duchy. The booming sharing-and-charging marketplace inverts the imperative for privacy, opening those personalized border walls to anyone willing to pay $45 an hour on average. (Prices range from $15 to $300.) 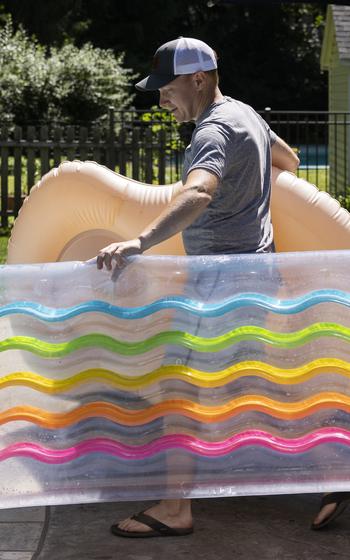 Karl Tradewell brings pool floats to the renters. He’s booked the pool 45 times this summer and August has yet to swelter. (Rachel Wisniewski/For the Washington Post)

Swimply is a modern variation on “Queen for a Day,” the 1950s and 1960s Cinderella game show that bestowed a night on the town and avocado-tinted appliances on a lucky woman. It’s “A Pool for Two Hours,” an evanescent dive into someone’s good life. Like travel or dining, Swimply presents another aspirational opportunity, a new lane in the eternal quest to place yourself in more splendid surroundings. Merely by being there, you feel like a better you, as though transported into a Slim Aarons’ poolside reverie.

The website offers an excess of choice — more than 25,000 pools in all 50 states, as well as Canada and Australia. Theoretically, as in John Cheever’s 1964 short story “The Swimmer,” renters might attempt to swim across a county, or side stroke through several states.

As with other rental sites, Swimply offers a wardrobe of opportunity. Like Tinder or Hinge, it is a chance to date a pool. Some of them, Jaff concedes, look a tad skeevy. “They seem to suggest a place where you can hook up,” she says. (Not that that’s ever happened.) There may be more above-ground listings than there are willing dippers.

“We’re democratizing luxury, something that was impossible to access for many people,” says Swimply CEO and co-founder Bunim Laskin, who’s all of 25. During the first two years of the coronavirus pandemic, with so many people stuck at home — home being pool-less for 96% of Americans — Swimply’s business doubled, according to Laskin, a former Yeshiva student and the eldest of 12. In 2018, he paid a neighbor to use her pool — and realized this could be a business. Then, he went on Google Earth and found other pools near his family’s Lakewood, N.J., home and asked if he could rent them out. Later this year, Swimply plans to move into rentals of other recreational spaces: basketball and tennis courts, industrial kitchens, recording studios.

With listings accommodating as many as 50 swimmers, what’s to stop a renter from staging a wet hot American summer rager in a stranger’s backyard? Swimply extends hosts a $1 million liability insurance policy and $10,000 in property-damage protection, but many of them, like Tradewell and Jim Battan, find the best insurance is to remain on the premises during rentals.

Battan happens to be — and this is his precise title — the Numero Uno Swimply Host, netting $170,000 since first listing Paradise in September 2020 and netting 386 five-star reviews. The place rents for $65 to $85 an hour, depending on the number of guests and time of week. It is, according to the listing, “LGBTQIA2S+, Orthodox Judaism, and nudity friendly.” He’s hosted a wedding in the pool.

That Battan, a 57-year-old IT consultant, lives outside consistently drenched Portland, Ore., comes as a revelation, but the pool is heated and folks are game. Also, Battan’s wife, Lisa, operates a large rescue-animal sanctuary, to the delight of guests.

In the past couple of years, Mary Horngren has been a regular at Paradise.

“My nirvana, an oasis,” says the 63-year-old retired medical hypnotherapist. “During COVID, where else was I going to go?”

“I was so grateful to share my pool with the community,” says the pool’s owner. The owner says she earned $25,000 in rentals last year. “It’s nice to get the money, but I love to share.”

The owner is speaking on condition that her name not be used because YIMBY has its limits, limits being the neighbors. Someone has repeatedly reported her to local authorities for renting a private pool. She ceased operations for a while but recently reactivated her Swimply listing. So far, no fine. She suspects the neighbor is more bothered than the county.

As the Numero Uno Swimply Host, Battan has often earned more from his pool than his job. With some of the proceeds, he built a $70,000 custom outdoor man cave.

“It’s the perfect little spot,” he says. It is not for rent. “The man cave is mine alone.”

Lending private space, it appears, has its limits.