Fending for dinner is snacking for our times 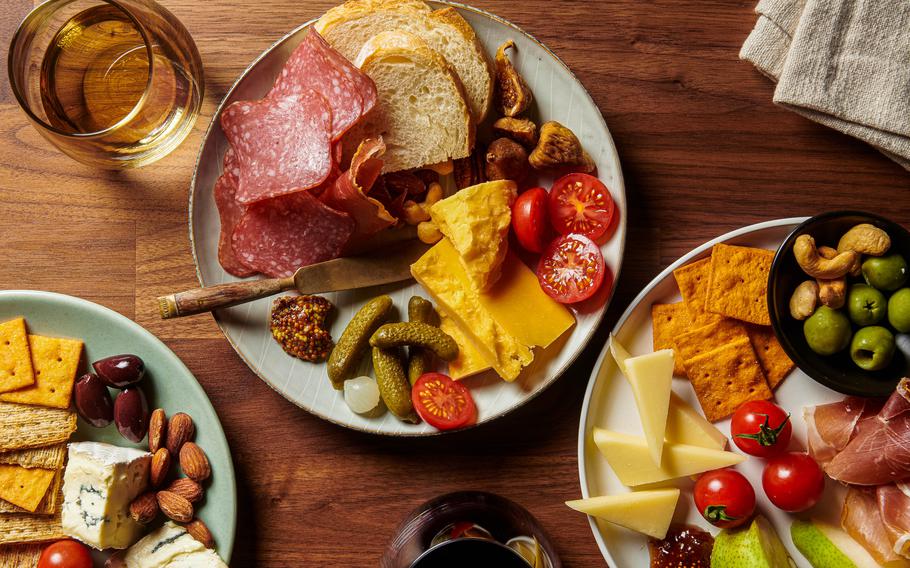 A plate of odds and ends can look pretty planned when it’s all said and done. (Rey Lopez/The Washington Post)

One evening in early April 2021, before much of the country had access to the coronavirus vaccine, New Yorker cartoonist Roz Chast and her husband looked at each other and said, "Shall we fend?"

They poked their heads into their pantry and refrigerator. They pulled out a handful of odds and ends, maybe: last night's Chinese fried rice and yesterday's chicken salad, lox, a brick of cream cheese, a box of Triscuits, leftover roasted cauliflower, a jar of pickles. "Fend it is," they said.

Essentially, Chast explained in a New Yorker cartoon and story, the idea of "fending" for dinner is to minimize dishes and waste, and to assemble a plate of proteins and carbohydrates, fiber and vegetables in an effort to form a full meal.

Maybe you fend, too? Or maybe you snack or have a loose charcuterie plate for dinner? Maybe you nosh or filch or graze or munch?

It's not uniquely a pandemic trend, but when millions of people started spending a lot more time in their homes, the habit became more popular. Chast, who has written more than a dozen books, got curious about what other people called this habit, so she posed the question to her Instagram followers. More than 1,700 people responded.

Some call them spa plates or have an eek, a getcheroni, a goblin meal, rags and bottles, engage in an anarchy kitchen or a blackout bingo, go feral, go Darwin, oogle moogle or serve a jungle dinner. "Two different people used the term 'ifits'," Chast wrote, "as in if it's in the refrigerator, it's fair game.'"

"I kind of like eating out of the refrigerator and not wasting food," Chast told me by phone from her home in Connecticut. "I think it's kind of gross to waste your money."

The chef of Nami Nori in New York City, Taka Sakaeda, agrees. For him, it's about the Japanese concept of mottainai, which is commonly used to express "a feeling of regret when something is put to waste without deriving its value."

For others, especially those generally responsible for getting a meal on the table every night, it's about relinquishing the responsibility of dinner.

Last year, recipes editor Ann Maloney wrote about her mother's Friday night meal plan, such a novel concept that her mother, Lee C. Maloney, wrote an article about it for Woman's Day magazine in 1976:

"Since Friday night has always been a raggedy time for our family, with me tired from a week's juggling of teaching and homemaking, I decided to label that night on the menu calendar EMFH, which means Every Man for Himself.

"At first the children and my husband were startled, and they felt a little abandoned and awed at the prospect of getting it all together. Gradually, after some spilled soup, a few eggs tumbling off the counter, several tough pizzas, they all began to take hold and develop a pattern of operation."

She elaborated on how her family adapted to the new schedule, learning to scrape together a dinner for themselves and sometimes each other with whatever was lying around.

Sarah Thomas, author of "Kalamata's Kitchen: Taste Buds in Harmony," and co-founder of the educational resource Kalamata's Kitchen, is a "heavy snacker" most days. "When I find myself foraging for dinner, I try to adopt a chaat mentality," Thomas says, noting that chaats are about having sweet, spicy and pungent flavors alongside saucy, crunchy and chewy textures in every bite. It's about balance. "Chaat-ifying my bowl of disparate ingredients is a nice loose framework for me to tentatively follow while I'm scrounging in my cupboards and trying to convince myself that, despite not buying groceries for a week, I really am an adult," she says.

But the concept can also be a new way to approach entertaining. Once, while traveling up the California coast, cookbook author Lukas Volger was invited to a friend's home for lunch. "I am the type of home cook who, when I have people over, I like to make sure I have everything prepared before they arrive. I have appetizers out, I have drinks premixed," Volger told me by phone. "But when I arrived at my friend's place, she seemingly hadn't done a thing to prepare for dinner. I was a little anxious at first, like 'Oh no, we're not going to eat for hours. . .'" But then Volger's friend started pulling things out of her fridge and setting the table. Minutes later, a feast of tapenades, bread, cheese, cured meats, olives and fruit filled the table. Wine was poured. Dinner - really, fewer than a dozen prepared snacks - was served.

That dinner inspired Volger's latest cookbook, a fun and elegant meditation on fending called "Snacks for Dinner." The concept is more Ina Garten than Martha Stewart. It's about relaxing in your own skin, about enjoying your own party, about not having so many dishes to do, about being a little bit lazy.

Laziness, too, is a hallmark of fending. In this, the third year of the pandemic, almost all of us have reached what some are calling goblin mode at least once. Characterized by an abundance of inertia, by an absence of motivation to accomplish even the most mundane tasks - Showering? Brushing one's teeth? Taking out the trash? These are not things a goblin would pay any mind. In goblin mode, one might have a goblin meal, which involves scavenging and cobbling together what can only barely pass for dinner.

It's as simple and base as "pouring the end of a bag of chips in your mouth" or "downing Eggo toaster oven waffles with hot sauce over the sink because you can't be bothered to put them on a plate," according to Kari Paul, who wrote about the concept this year for the Guardian.

As Chast found when doing research for her cartoon piece, fending can take on many forms. It can happen at any meal, though dinnertime fending seems to be especially popular.

For chefs, meals are almost always made up of the odds and ends that look like they're about to go bad. Chef Greg Baxtrom of Brooklyn's Olmsted, Maison Yaki and Patti Ann's restaurants frequently "forages" in his walk-in cooler and dry storage for meals for himself and his staff.

Baxtrom says he's looking for what's "extra" to be sure he doesn't let anything go to waste. Then, he posts these foraged meals on Instagram. Sometimes the meals take the form of an open-face sandwich, with all the bits and bobs layered on, one at a time. Other times they're a new spin on breakfast for dinner or a riff on a classic dish, such as cassoulet. They're admittedly much more cheffy than a goblin meal, but they fit into the category because of the last-minute, haphazard nature of their assembly. "Sometimes I don't even know what I'm going to make when I start cooking," Baxtrom notes.

Leaving the meal open to chance, as though it's an adventure, can be part of the point.

Chast tells me that she learned how to fend from her father, who simply seemed to love to eat that way. "He used to like to just take everything out of the refrigerator and kind of lay it out on the table. This was his favorite way of making a meal. He would have some borscht and some pickles and maybe a piece of muenster cheese. . . . It was about sort of picking out what he liked," Chast says, noting that both of her parents worked. "It wasn't like [my mother] woke up in the morning thinking, 'Now what kind of gourmet dinner shall I prepare today?'"

Chast doesn't fend while she works - "usually I have a cup of coffee," she says - but she fends frequently. Besides the New Yorker cartoons, "I usually have a few projects going on . . . I'm usually working on at least one book, often two. I have some craft thing going. I like a lot of stuff because I think I don't like to get bored. So if I'm getting tired of doing something, there's always something else to draw on," she says. "I guess you could say my whole life is fending," she says. "I like that."