The therapeutic power of scuba diving

Tracy Schmitt spent years trying to find a scuba instructor. She is a competitive sailor, skier and mountaineer, but each dive shop she approached refused to entertain the idea that she could be a capable student.

"I had all of these conversations trying to be persuasive," Schmitt says. "Not even to get accepted but just to - pardon the expression - get a foot in the door."

Schmitt was born a quadruple amputee. Her disability eclipsed her many achievements, such as captaining 110-foot ships in the eastern Atlantic, and the instructors assumed teaching her to dive would be impossible.

"They couldn't imagine: no legs and no left arm, and my right arm is unique with one finger - how would I do it?" Schmitt says. "Fast forward, today I'm an advanced scuba diver approaching my one-hundredth dive." She just got back from a trip to Egypt, where she dove in the Red Sea.

For people who are not living with a disability, learning to scuba dive is as simple as going to the right place with the right amount of money. The activity - or sport, hobby or lifestyle, depending on who you talk to - inspires divers to travel the world in pursuit of premiere dive sites.

But as Schmitt experienced, not every dive shop has the training, equipment or initiative to welcome every student. That's something advocates are working to change as more people discover scuba and its therapeutic benefits.

Cody Unser grew up in a family of scuba divers, but she got sick before she was old enough to join them in the water. At 12 years old, Unser developed transverse myelitis (TM), a rare autoimmune condition that left her paralyzed from the waist down.

As she was adjusting to her "new nightmare," Unser struggled with depression. "I didn't think anything was possible," Unser says. "I would stab my legs with pens. I would throw myself on the floor from the bed. All of us with disabilities have dark days."

Her brother Al was worried that his sister was withering away. He taught Unser to do wheelies in her chair - and incensed staff at her rehabilitation center by challenging his sister to wheelchair races. Eventually, he convinced her to try scuba diving.

Between putting on a wet suit, learning techniques and handling equipment, diving was a lot for Unser to take in. But unlike the other difficult skills she had to learn following her paralysis, the basics of diving were fun. And when she went underwater, it became more than fun.

"The whole world goes silent and your worries just drift away," she says. "It was the first time I felt like myself again."

The learning process of scuba is divided in three parts. There is the academic portion in which students take scuba diving 101 online or in a classroom. The second step takes place in a confined water setting where an instructor walks students through essential skill development. The third continues that training in an open body of water, such as an ocean, lake or quarry. 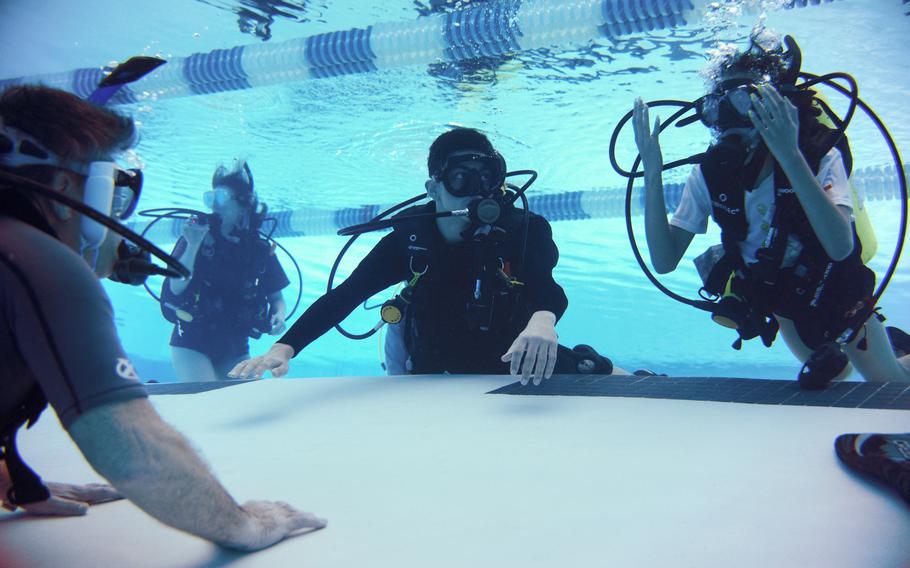 For scuba students with disabilities, there can be additional challenges to training. Fortunately, there is no exact way to dive, and the industry encourages adjusting techniques to make the sport more accessible. As long as students can demonstrate they can perform specific skills - such as entering the water safely or communicating underwater - they can scuba.

"How you achieve the performance objectives is not the point. The point is that you indeed achieve them," says Kristin Valette-Wirth, a spokesperson for the Professional Association of Diving Instructors (PADI) Worldwide.

In 2018, PADI launched an Adaptive Techniques Course that teaches how to modify equipment configurations and develop a diver's skills based on their needs.

For example, Unser and her instructor found ways to adapt part of the certification process - the fin pivot - by using webbed gloves in lieu of fins. Some divers adjust how they enter the water for a dive, using a modified roll instead of a default giant-stride.

Schmitt has worked with her longtime instructor, Hubert Chrétien, founder of Freedom at Depth Canada, to find adaptations that work for her. They have customized gear over the years, such as designing wet suits tailored for her body, finding a spatula device that helps her pinch her nose to equalize air pressure while diving, and strapping on shin fins to help her swim through stronger currents.

With the right adjustments, the end result is a better dive experience for Schmitt. "I'm eternally happy," she says. "I'm fully present and fully absorbed once I'm underwater and descended. It's magical."

Silence is part of what makes scuba such a powerful therapy for people with disabilities and those with post-traumatic stress disorder (PTSD).

"If someone is experiencing a lot of trauma, their brain is constantly hypervigilant," says Christine Norton, a certified clinical trauma professional and certified clinical adventure therapist. "So if you're underwater, you're able to calm some of that and focus."

Norton also says the demands of monitoring your equipment, communicating with your diving partners and exercising your technique keeps your brain engaged in a constructive way.

As a professor at Texas State University, Norton got involved with Operation SCUBA, an outdoor adventure pilot program that offered veterans the opportunity to learn adaptive diving. She studied the program's impact, and she concluded that Operation SCUBA and similar concepts have a therapeutic benefit "by enhancing coping skills, peer support, and a deeper connection to oneself, others and the natural world."

After getting certified, Unser felt empowered to learn how to drive a car. She quit home-schooling and went back to her high school. She and her mother started the Cody Unser First Step Foundation to raise awareness of TM, and "Cody's Great Scuba Adventures," a quality-of-life program to sponsor people with disabilities to get certified with a loved one at a tropical location such as Mexico, the Bahamas and Florida. (Diving in warm water is crucial for those with spinal cord injuries because cold water can lead to spasticity.)

Unser also pushed her doctors at Johns Hopkins Hospital and the Kennedy Krieger Institute to conduct a study on the neurological and psychological impact of diving.

When scuba diving, "I started feeling sensations at depth," she says. "My legs would tingle, I felt my bladder more . . . I knew there was something going on underwater and I would hear from other people diving with a disability that they were experiencing the same thing."

In 2011, the team of researchers and a group of veterans with spinal cord injuries traveled to the Cayman Islands for a four-day scuba-diving certification trip. According to the news release from Johns Hopkins, the participants had "significant improvement in muscle movement, increased sensitivity to light touch and pinprick on the legs, and large reductions in post-traumatic stress disorder (PTSD) symptoms."

While doctors recognized results of the small study were preliminary, they called the findings dramatic.

Unser hopes research documenting scuba's health benefits will help legitimize the activity beyond hobby status. That distinction is crucial for nonprofits such as hers that need help raising money for training, trips and equipment.

"Funding has been always a challenging issue," Unser says. "When we apply for grants, they don't recognize scuba diving is something that is therapeutic for somebody with a disability. They just chalk it up as a recreational sport."

At the George Washington Rec Center in Alexandria, Va., students and instructors gather to dive in an indoor pool. Beyond their interest in scuba, many share a military background - such as army veteran Chris Lee.

Lee first discovered diving in 1994 while stationed in Panama. He returned to it through Patriot Scuba in 2012, finding that it helped immensely with his physical and psychological wounds over his 22 years of service.

"If I'm just sitting here, my back is very achy. If I'm underwater, there's nothing," Lee says. "I have issues with my brain racing, things like that - a lot of people do. When I'm underwater, I'm just comfortable. I'm focused."

Most of the divers who gather at George Washington Rec Center have musculoskeletal injuries. "But many are emotional injuries," says Robert Taradash, an adaptive support diver and instructor and the executive director for Patriots for Disabled Divers (PFDD), a nonprofit that trains wounded military veterans and works with Patriot Scuba.

Taradash adds, "The PTSD, traumatic brain injury - probably over half of our divers that we put through our program have the emotional scars."

Following Taradash's 34 years in the Army, he went to Patriot Scuba to get his daughter certified as a high school graduation present. At the shop, he learned that as a disabled veteran, he qualified for instruction through Patriots for Disabled Divers. As he earned his certification, Taradash was amazed by the effect it had on him.

"All you can really hear is your own breathing, and if you've ever learned about PTSD and anxiety, a lot of it is concentrating and controlling your breathing, calming down," Taradash says. "All of those sensations are heightened underwater . . . it really focuses you."

Both he and Lee became certified PADI adaptive scuba instructors and Handicapped Scuba Association (HSA) instructors. They travel and scuba with divers with disabilities in places such as the Georgia aquarium, the Bahamas and the Galápagos Islands.

One particularly special trip was to California to get Army veteran Bryan Anderson certified. Taradash had been Anderson's battalion commander in Iraq, where the soldier became a triple amputee in 2005.

During the pandemic, Anderson started his online training at home in Chicago and then completed his confined dive training in Washington, D.C. Finally, he traveled to Catalina Island for the open-water portion of his certification with Taradash. The experience was beautiful, fun and therapeutic, Anderson says.

"You're in the water just like everybody else - all the fish and animals - even though I'm a triple amputee," he says. "Being in the water made me feel like I was a part of it, and not different in any way."

For those who want to try scuba, Unser says to look up their local PADI dive store and ask if there's someone on staff that has training in adaptive techniques. When there doesn't seem to be an appropriate instructor available, she encourages prospective divers to contact her foundation.

"I will not let somebody go without becoming certified or making it happen," she says. "There are other nonprofits out there that are doing what we do with the foundation."

Whether Unser can support a new diver personally or find another way to help doesn't change her overall mission: to make every dive shop accessible for people with disabilities. "We just have to encourage more instructors to become trained to teach someone with a disability," she says.

"Nobody should be told 'no,'" Unser says. "Diving told me 'yes.' That's what diving has given me, and that's what I want to give everybody on this planet who has a disability."