Paying to get some rest at Nap Pod 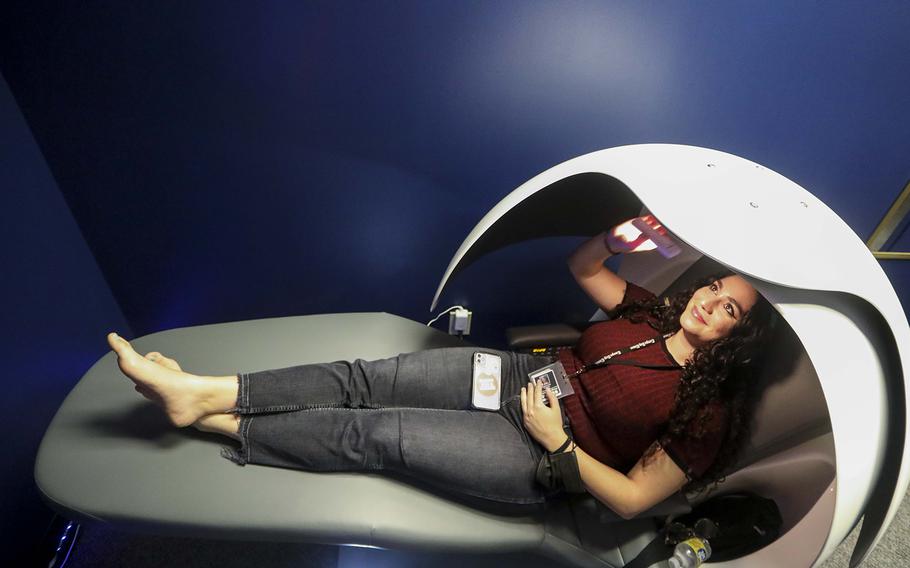 I’m tired. If you’re reading this, you probably are, too.

Pandemic living, societal shifts, inflation and global uncertainty will do that to a person. So when I saw a sign for Nap Pod, “a relaxation oasis for those tired of being tired,” I knew I had to visit.

Nap Pod, which opened in downtown Tampa, Fla., in September, is exactly what it sounds like: a cozy refuge where employees can sneak off during the workday and curl up for a little bit of shut-eye. A 20-minute session in a zero-gravity pod goes for $16; a full hour costs $48. Both are Health Savings Account and Flexible Spending Account eligible and come with complimentary water bottles, mints and lemon-scented face towels.

I picked a Monday, my sleepiest day of the week, and headed over for a siesta. Maybe this could help me unwind.

“The only people who aren’t stressed are babies,” Nap Pod founder and CEO Scott Chester, 42, told me shortly after I arrived. “That’s because they are always taking naps.” 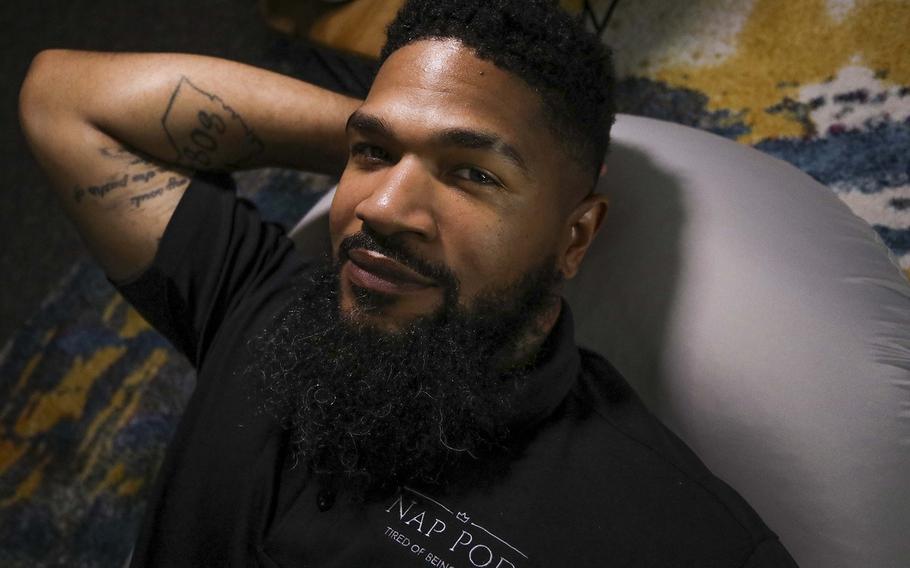 As a father of three kids, Chester knows stress. He found himself burned out after seven years of working long hours in IT at Raymond James. So Chester quit his job and cashed out his retirement plan to start Nap Pod: a place where anyone, from doctors and lawyers to fast-food workers and salon techs, could stop during the day and doze.

Chester’s research taught him that short naps can improve mood, inspire creativity and boost productivity. He dropped $30,000 to buy two MetroNaps EnergyPods from a New York-based company called Restworks. Billed as “the world’s first chair designed for napping at work,” these are the same glossy, spaceship-looking thrones where Google employees snooze on the job. The chairs have been a big hit at hospitals and airports around the world.

Local business got off to a slow start, however, as downtown Tampa hadn’t bounced back after the Delta coronavirus spike when it opened in September. Chester got a couple walk-ins a week and gained a handful of regulars who subscribe on a monthly basis for $240. Starting in April, one of the pods became available for local businesses to rent and bring to their office for employee use at $1,600 a month. The other pod remains at Nap Pod headquarters at 412 E Madison St.

Before visitors slip away into sweet dreams, Chester encourages them to spend some time in the relaxation lounge in the lobby. This nook is filled with air purifiers, houseplants, a foot massager and a Moon Pod (a fancy, zero-gravity beanbag chair). A projector casts a looping video of a Japanese river on the wall, and the gurgling sound of flowing water plays on a Bluetooth speaker. This is the lounge area at Nap Pod in Tampa, Fla. (Ivy Ceballo, Tampa Bay Times/TNS)

While I reclined in the beanbag chair, Chester told me about his own hectic schedule. He starts his remote work as a Department of Defense contractor around 7 each morning before coming into the Nap Pod space at 10. He welcomes clients until about 4 p.m., working on his primary job in the meantime. Even though Nap Pod is his passion project, he doesn’t use it himself.

“I don’t feel like I have enough time to do that right now,” he said. “I want to get to that point.”

I was exhausted just thinking about it, or maybe the foot massager was doing its job. Either way, I was ready to close my eyes. I stepped into a small, windowless room lined with a strip of glowing blue LED lights. A container of earplugs sat on a small table in the corner. A galactic display of cascading laser beams and swirling stars projected up onto the ceiling, while four diffusers oozed the scent of lavender and sandalwood. Chester explained that his fiancee’s daughter, who has autism, finds these scents helpful when she’s trying to rest.

Against the wall was the star of the show: the sleek white and gray nap pod, consisting of a large orb with a long footrest protruding. The chair is ergonomically designed to take pressure off the lower back as the seat tilts back.

Chester showed me headphones I could use and a light at the top of the pod, plus buttons to control the tilt, the volume of the music and the optional vibration that would help wake me up. I pulled the privacy visor across the front of the pod to cocoon myself, leaned the chair back slightly and tried to relax.

The laser lights were still a little distracting, so I got up and turned them off. Back to the chair, where I pressed the arrow button to lean back as far as I could. Wait — should I grab a pair of earplugs?

My zero-gravity chair was too far reclined for me to get out of it, and the darkness made it hard to see the buttons to raise me back up. I decided to reach from my seat and nearly fell out of the pod. Never mind.

I inhaled the lavender air and tried not to guess how many minutes of precious napping time I was wasting. I slid on the set of headphones and soaked in the tranquil soundtrack: chimes. The lilt of a gentle piano melody. The chatter of seagulls.

Any sense of peace I felt was interrupted by the music, which shifted into an almost menacing rhythm of gongs and bells. I fumbled in the dark until my fingers found a button to change audio tracks. A serene woman’s voice instructed me to enjoy my nap.

Close your eyes, she said through the headphones. Now relax. I would like to say that I instantly slipped into dreamland. I was definitely tired. But between a stressful drive across the Howard Frankland, a mad scramble to find parking downtown and the novelty of this futuristic seating arrangement, I couldn’t quite calm my mind enough to nap. So I gave up on my mission to slumber and focused on chilling out.

I listened to the voice guiding me into relaxation, breathing in and out deeply, and tried not to think about work, traffic on the drive home, or any of the other worries waiting for me. Instead of reaching for my phone to distract me, I paid attention to the sensations in my body.

My therapist would be so proud right now, I thought.

Then there was a shimmery sound, like a twinkle of bells. The back of my seat started to gently rumble. The woman’s voice through the headphones was replaced with a man’s, and he was telling me to stretch.

It’s time for you to wake up and rejoin the day, he said.

The pod automatically readjusted, propping me back up. As I pulled back the privacy shield, I heard chatter in the lobby and the rush of flowing water from the projector.

Was I less sleepy than before? Maybe.

Did I enjoy a break from the day? Absolutely.