What do you learn in Santa school? More than 'ho, ho, ho.'

by
By Steve Friess
• Special to The Washington Post • December 9, 2021 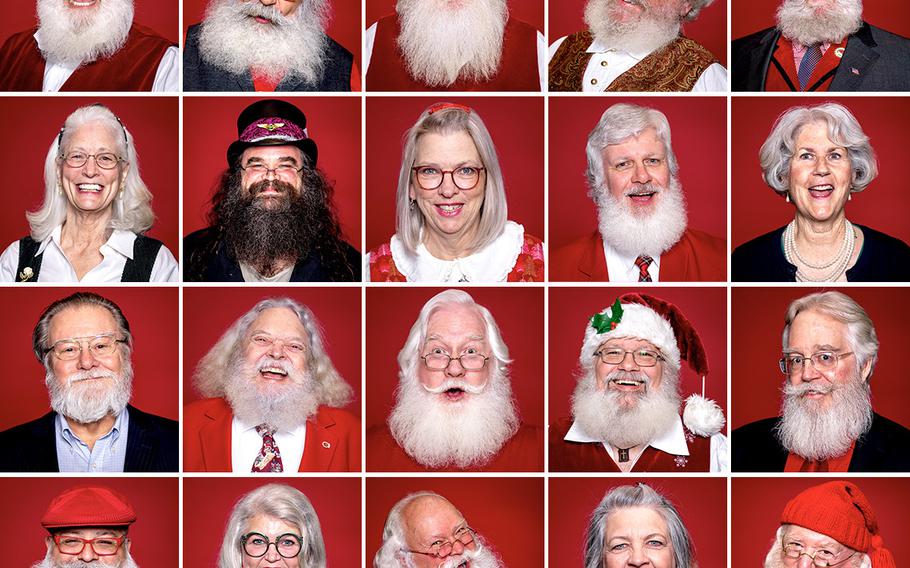 A sampling of this year’s 200 participants who learned to be Santa Claus and Mrs. Claus at the Charles W. Howard Santa Claus School in Midland, Mich., in October. (Nic Antaya/For The Washington Post)

Back in 1931, millions of Americans were introduced to the modern image of Santa Claus through Coca-Cola ads featuring a bearded, rosy-cheeked fellow clad in a red suit with white trim. Santa Clauses soon began popping up across the land, often at department stores to draw parents and children and promote sales. Random employees were frequently thrown into service.

By 1937, a Rochester, N.Y., department store Santa and full-time dairy farmer named Charles W. Howard had surveyed the Christmas landscape and decided someone needed to improve the Santa stock. Thus began another seasonal tradition: an annual school where aspirants could learn the fine art of personifying Christmas. Average Santas lacked quality costumes, had no training on interacting with squirmy or fearful children, and didn't know about such topics as the proper care of reindeer (kids often ask about Rudolph).

Howard, who spent 18 years as the world's most visible Santa on the climactic float of the Macy's Thanksgiving Day Parade, taught such things. He turned his school over to a colleague from central Michigan before his death in 1966 - which is how it came to be that the 84th annual session of the Charles W. Howard Santa Claus School kicked off over three days in October in Midland, Mich., about 125 miles northwest of Detroit.

"We're here to build the Santa spirit in your hearts," promised Tom Valent, the cleanshaven and relatively trim 71-year-old school director who has been appearing as Santa locally for 47 years. He was talking to the 200 Santas and Mrs. Clauses from across the nation in a community center auditorium that (coincidentally, Valent insists) boasts bright green seats and ruby red carpeting. 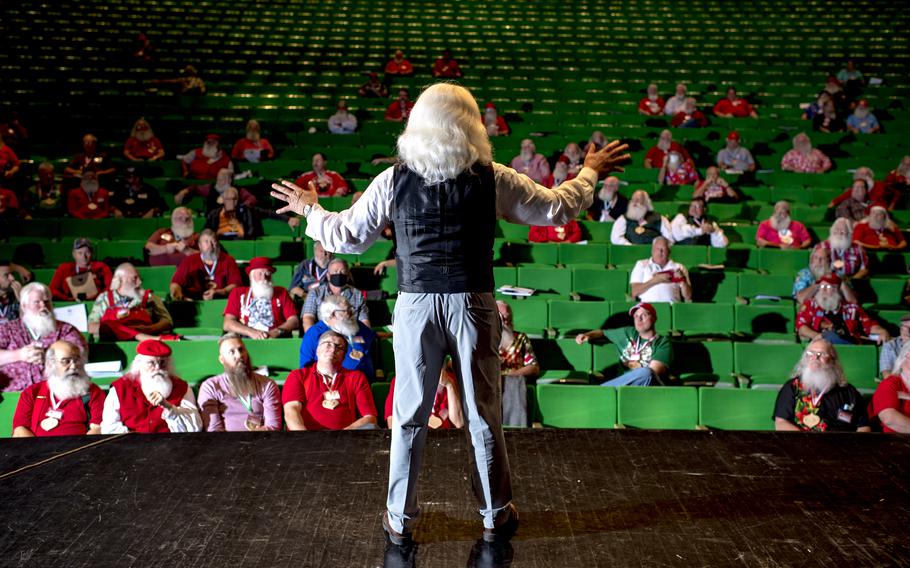 Tom Valent, dean of the Santa Claus School. “We’re here to build the Santa spirit in your hearts,” he tells the 200 Santas and Mrs. Clauses in the class. (Nic Antaya/For The Washington Post)

Valent and his wife, Holly - yes, Holly - took over the school from its second operator in 1987. "It's always worked, and I have all the confidence in the world that it's gonna keep working," he said. "I'm not going to tell you I'm the greatest Santa. I'm not. I just love being Santa." 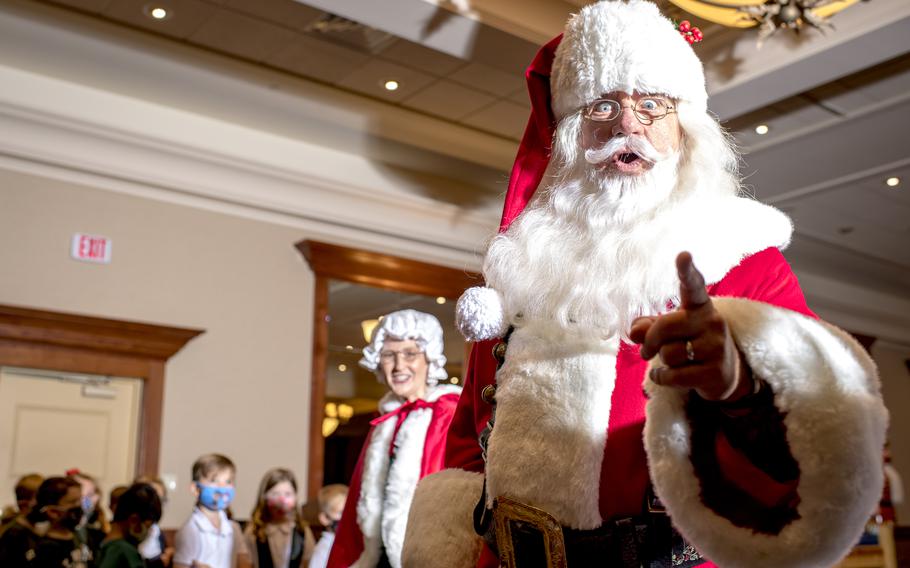 Tom Valent took over the school from its second operator in 1987. “It’s always worked, and I have all the confidence in the world that it’s gonna keep working,” he says. “I’m not going to tell you I’m the greatest Santa. I’m not. I just love being Santa.” (Nic Antaya/For The Washington Post)

To folks not in the Santa biz, the "craft" itself would seem simple: Don ye now the Santa apparel (plus a fat suit if necessary) and barrel into a room with a sack of toys over your shoulder or sit on a throne bellowing "ho, ho, ho" and asking kids if they've been good all year. Yet the attendees - who paid $500 in tuition per person - soak up a litany of fun facts about the St. Nicholas legend as well as pro tips on marketing, physical conditioning, costuming and tactics for answering tricky questions hurled at them by inquisitive youngsters and troublemaking adults.

The key is answering inquiries with plausible fibs that don't ruin the Santa myth. "I'm a professional liar," Michael Beurer, who was set to appear as Santa in the Dec. 4 Christmas parade in Pontiac, Mich., said with a chuckle. "Sometimes a kid will test me by asking if I know his address to deliver his gifts, and what I do is I start rattling off coordinates - 25 degrees north, 44 degrees west, whatever - and they say, 'No, I live at this address,' and I say, 'But I'm giving you the coordinates from the air.' "

The sheer breadth of the curriculum, taught by volunteer staff including the Valents, is impressive. (Tuition, Tom Valent says, pays for facilities, catering and transportation for field trips throughout the weekend.) A voice teacher explained how to retain a properly husky voice with cayenne-spiked hot tea as the peak season progresses. A pair of nurses stopped by to talk about staying healthy with exercise ("What do you call a Santa that doesn't move? Santa Pause!") and nutrition. A marketing guru seemed to draw the most interest with a suggestion that Santas persuade stores to set up thrones for photo opportunities in the parking lot since pandemic-cautious families don't pile into malls like they used to.

There's no such concern, obviously, with virtual Santa visits, which are now so popular that speakers mentioned websites like Hire Santa, Santa's Club, JingleRing and Talk to Santa. Beurer, who co-presented a session on that business model, said he did 350 home visits via Zoom last year. Often, he chats with the parents beforehand to learn details about the children, then can wow them in ways he couldn't at a public appearance.

"In one case, the big sister was starting not to believe in Santa," Beurer said, "so the parents gave me information on her and I said, 'Olivia, how did you like the cosmetic stuff I brought you last year for Christmas?' And she looked so surprised, like, Wait a minute, this guy might be the real thing."

Most Santas and Mrs. Clauses say they aren't in it for the money, but a few school attendees are smitten not only by the holiday spirit but also by rumors - unconfirmed - that some classmates bank six-figure sums each season. Michael Godfrey of Pahoa, Hawaii, at 38 the youngest participant, said his mother often told him that he looks like Santa (he's stocky but neither silver-haired nor particularly full-bearded) and that he should give it a try. "I've done all sorts of things: computer engineering, delivery driver, taxi driver, always low jobs that just never really went anywhere," Godfrey told me. "There's a lot of potential in being a professional Santa. A starting Santa can make $25 to $75 an hour depending on where they work." (Valent says he doesn't know anyone getting rich off being Santa.)

As with any meetup of like-minded hobbyists, the camaraderie is as important as what's on the official agenda. Local Santas can often be unfriendly to one another, said Robert Auer of Pelham, Ala., "because you're taking their business away or they're taking business away from you." At Santa school in Midland, everybody - teachers and students alike - seemed willing to share tips. "I'm telling you," he said, "there wasn't a bad Santa in the bunch."

Auer admitted he was nervous about chatting up fellow Santa students, many of whom attend the program every year and knew one another. Then Holly Valent, resplendent in a red crushed velvet gown trimmed with cottony white cuffs and a matching shawl, strode onstage as Mrs. Claus and asked to be serenaded. Some 200 people stood obediently and erupted in unison into a rendition of "Jingle Bells" so gleeful and on-key that it seemed like a recording. But, no, as with most of the chest-length beards and bellies like bowlfuls of jelly, it was real. "I looked around this room and I didn't see anybody not singing," Auer said. "And it was really pure joy." In other words, the true spirit of Christmas.