Support for the smallest 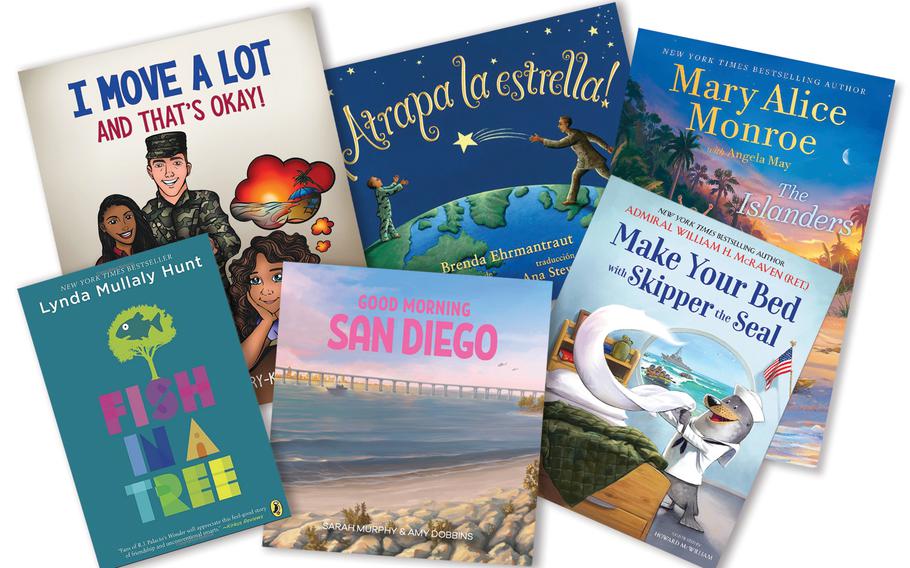 This season is a bountiful one for new books for and about military kids, with picture books and chapter books for children to read independently or enjoy with parents and siblings. Books about military kids often focus — understandably — on deployment or moving, both important topics. But it’s refreshing to find stories about military kids that depict their experiences with more nuance, recognizing their lives are deep and wide as others their age. The lives of military kids — new friends, new schools, getting through deployment, and other adventures — are well represented in this list.

“Make Your Bed with Skipper the Seal” by William H. McRaven, illustrations by Howard McWilliam. This title, which hits bookshelves Nov. 16, is based on a familiar phrase from the author, a retired four-star admiral whose “make your bed” advice in a commencement speech went viral in 2014. In this picture-book version, Skipper the Seal embarks on Navy SEAL training, where he and his fellow recruits learn perseverance, dealing with failure, and of course, to make their beds. McRaven, a former SEAL and commander of the United States Special Operations Command, said he intended this book to encourage young readers to become their best selves.

“I Move a Lot and That’s Okay” by Shermaine Perry-Knights. Drawing on memories of her military childhood, Perry-Knights tells her story to reassure military kids who might not describe moving a lot as “okay.” The book is about a young girl experiencing a new environment, language, and culture when her family moves to Naples, Italy. The author said she wanted to share a message of resilience to help military children overcome the obstacles of moving and readjustment.

“The Islanders” by Mary Alice Monroe and Angela May. This is a chapter book for middle-grade readers interested in nature, conservation, and adventure. The main character, Jake, is a regular kid who happens to be from a dual-military family — Army dad, Air Force mom. After his dad is injured in Afghanistan, Jake goes to spend the summer with his eccentric grandmother, where he meets a group of kids very different from him and learns about caring for nature and the nature of friendship. “The Islanders” came out this summer. It is the first in a series about Jake and friends, with the second installment, “The Islanders: Search for Treasure” expected in 2022.

“¡Atrapa la estrella!” by Brenda Ehrmantraut, translated by Ana Stevenson, and illustrated by Vicki Wehrman. This Spanish picture book, which debuted in October, is a contextual translation of Ehrmantraut’s “Night Catch,” a favorite for kids going through deployment since its first publication in 2005. Ehrmantraut wrote the book for her Army brother’s family during a year-long deployment, to help them connect while they were apart. In the story, a soldier and his son play an imaginary game of catch with the North Star. “Not ball as usual in the park, but something special after dark,” becomes, in Stevenson’s lyrical translation, “No será el mismo juego que solíamos hacer, sino algo muy especial cada atardecer.”

“Good Morning San Diego” (Good Morning Military Books series) by Sarah Murphy and Amy Dobbins. Other titles in the series: “Good Morning Guam,” “Good Morning Okinawa,” and “Good Morning Yokosuka.” Plenty of new ideas were hatched during the pandemic lockdown, and this new series is one of them. Murphy and Dobbins, both military spouses, created the books to introduce kids to various military duty stations. The authors say the Yokosuka book is about the Navy base there, but their other titles are appropriate for kids in any military branch about to move to one of these locations. The books also provide a way for military kids living in those places to start conversations with extended family and faraway friends about where they live. The authors plan to add more books to the series.

“Fish in a Tree” by Lynda Mulally Hunt. This middle-grade story came out in 2015 but is worth reading because it includes something that is often overlooked—how successive school changes affect learning for military kids. Fifth-grader Ally has a secret: She can’t read. Because of frequent military moves and her clever use of classroom disruptions, Ally has been able to keep her secret from one school to the next. Until a new teacher, Mr. Daniels, discovers Ally is not a troublemaker but a bright girl who happens to have dyslexia. Mr. Daniels helps Ally find effective ways to learn and make friends. She realizes other kids in her class need help and friendship too, and she doesn’t need to keep her secret anymore.

Terri Barnes is a book editor and the author of “Spouse Calls: Messages from a Military Life,” based on her long-running column in Stars and Stripes. A collector and lover of children’s literature, she has been known to give picture books to everyone on her Christmas gift list. Contact her online at terribarnesauthor.com.