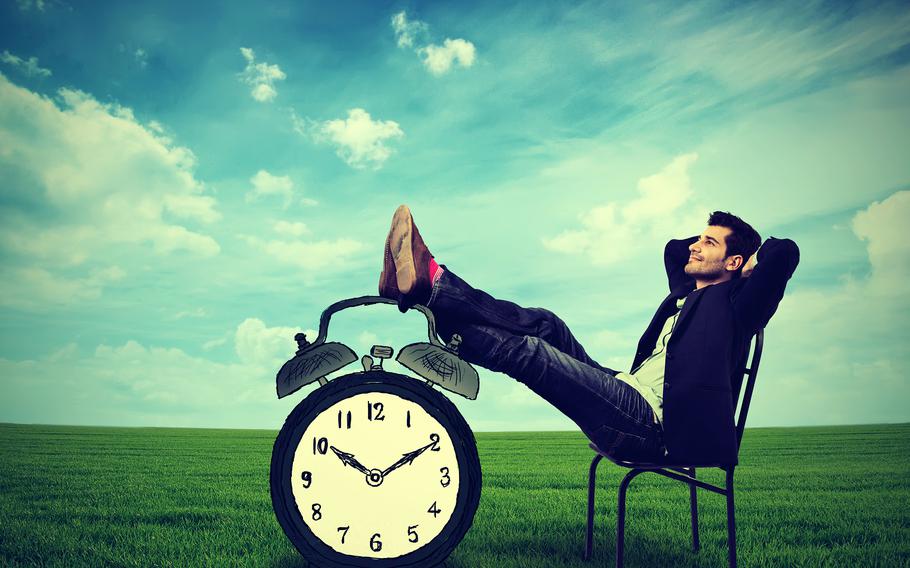 It turns out an overabundance of free time is just as detrimental to our health as having no time to spare. (iStock)

Have you ever had one of those days - that turned into weeks - when you had approximately 645 things to do and not a single minute for leisure time?

Like many of us, Cassie Mogilner Holmes sometimes feels like she lives in that state. She also - and this will probably sound familiar - has entertained the idea of trading all those obligations for a desert island.

Instead, Holmes, a professor of marketing and behavioral decision-making at UCLA’s Anderson School of Management, decided to research whether extra free time would actually make her happier. It turns out that reclining alone on a beach all day might not be as ideal as it sounds. “To that initial question, shall we quit everything and go live on a desert island, the answer is no,” Holmes says. “We would not be any happier.”

According to study results published earlier this month in the Journal of Personality and Social Psychology, an individual’s well-being increases in correlation with their free time - but only to a certain point. While having too little free time isn’t healthy, having too much also diminishes well-being.

“What we found is that a moderate amount of free time or discretionary time is kind of the sweet spot that people are happiest with,” says lead author Marissa Sharif, an assistant professor of marketing at the Wharton School at the University of Pennsylvania who collaborated on the new study with Holmes and Hal E. Hershfield.

The researchers did not assign exact numbers to the optimal amount of free time per day. In general, though, it hovered around two to five hours, Sharif says. Those who had less than two hours of discretionary time per day experienced stress around their tight schedules. But once someone’s daily free time exceeded five hours, their well-being began to decline.

There were, however, some exceptions: When people with large amounts of free time spent that time with others or felt like they were passing the hours in a meaningful way, they didn’t experience that same drop in well-being.

The new research is based on several data sets, including from the Bureau of Labor Statistics’ American Time Use Survey and the Society for Human Resource Management’s National Study of the Changing Workforce. The researchers also conducted experiments in which they asked more than 6,000 Americans to imagine having a certain amount of free time every day for at least six months, and to estimate how much they would enjoy that time.

Selin Malkoc, an associate professor of marketing at Ohio State University, noted that the findings might vary in other countries “where leisure is valued differently.” Americans tend to be more obsessed with work than people in other nations, she says.

But she was intrigued that the researchers compared having too little and too much discretionary time in the same study. “There’s really been no study to date that put everything together and examined this curvilinear relationship.”

Charlotte Fritz, an associate professor in industrial and organizational psychology at Portland State University, also appreciated that the researchers “not only said, too much or too little time is bad for your life satisfaction - but that they said, well, let’s look at how this time is being used and experienced.”

Based on the results of the study, here are a few tips from experts on how to optimize your free time to increase your sense of well-being.

If you feel like you have too much leisure time:

According to the new study, people who spent their free time in “productive” ways, such as developing new hobbies, lifting weights, bowling or biking, experienced optimal well-being. So, if you’re newly retired or unemployed, and unsure what to do with your suddenly empty days, consider hitting the trails or, say, mastering a new language.

Fritz emphasizes that, in this context, “productive” means worthwhile or fulfilling, rather than contributing to the greater good. “For some people, it might be sitting on the beach watching the waves, and for others, it’s volunteering or renovating the house.”

Seek out other people

You’re more likely to be happy if you spend some of your free time engaged in social activities, the new research suggests. Some of the activities that participants enjoyed sharing with others included sports or playing billiards. When people spend their free time together socially, the study authors wrote, “more [free time] is better.” As Sharif put it: “If you’re lucky enough to have the opportunity to spend that time with other people, that’s a great way to not experience the drop off” in happiness that typically accompanies copious amounts of leisure time.

Recent research co-authored by Malkoc found that viewing leisure time as wasteful undermines how much you enjoy it. These people who believed that free time was fundamentally a waste were also more likely to be stressed and anxious, she says. To shake that attitude, she suggests focusing on the higher end-goal of enjoying discretionary time: It will improve your life. That might mean telling yourself, “It will actually make me a better person, a better parent, a better friend,” she says. “Remind yourself that everything serves a purpose, including putting your feet up and reading a book or doing nothing.”

If you feel like you have too little leisure time:

Most of us could benefit from pruning our schedules - but cramming them full is often a reflex. Building in leisure time requires establishing good boundaries and a strong sense of priorities, experts say. Make a list of everything that demands your time on the average day and note which tasks could be outsourced or scrapped. Malkoc suggests asking yourself: “What is the busy work that we can eliminate and replace with better things?”

Malkoc’s biggest piece of advice is to be mindful and introspective about how you use your time. “We need to know what makes us happy and take a moment to take stock of our activities, what we choose to do and what really does contribute to happiness in our lives.”

Put your calendar away

Scheduling takes the fun out of free time, says Gabriela Tonietto, an assistant professor of marketing at Rutgers Business School. According to her previous research, penciling in a date and time for leisure can make it feel like a chore. It also decreases anticipation of that free time. “Scheduled leisure is less enjoyable than more spontaneous or impromptu leisure,” Tonietto says. “It makes it feel more like work once it’s on your calendar. People start saying, ‘Well, this is an obligation,’ as opposed to something that you want to do.” While some scheduling is inevitable, “rough scheduling” is often best: Make loose plans to meet someone for lunch or for a jog on a Friday, for example, but don’t assign a time until shortly beforehand. That’s one way to leave room for spontaneity.

We know: It can feel impossible to steal even five minutes a day for yourself. But two hours a day, the minimum amount of time the study found that people needed to feel less stressed for time, “is actually quite feasible” for some people, Holmes says. And it doesn’t all have to come at the same time - coffee breaks, short walks and reading or watching TV count toward your discretionary time. “You don’t have to quit everything,” she says. “The important thing is that you carve out a couple hours in your day, and that you’re spending it in ways you want - not on obligations.”