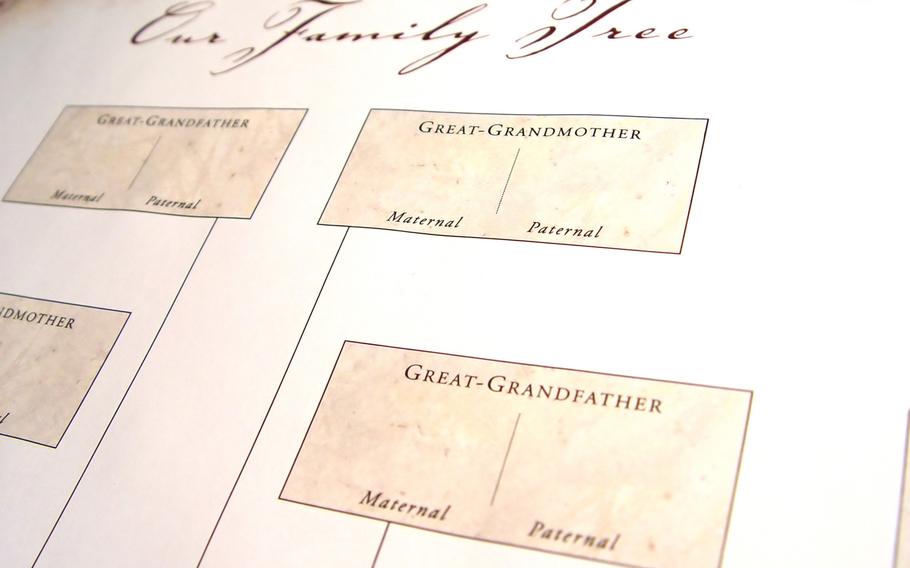 Looking to the elders in the family, even those not in your direct lineage, can prove useful when trying to trace your family tree. (Dreamstime/TNS)

Jessica Trotter went from working on a heritage Girl Scouts badge in elementary school to tracing back her lineage three centuries.

Now, Trotter, 44, of Lansing, Michigan, is helping others do the same by exploring genealogy, the study of family and family history. Trotter authors a blog, www.genieroadtrip.com, packed with advice. She often is tapped by places such as the Michigan History Center in Lansing to lead talks.

"I just really like finding out about, I guess, the lives that lead to mine," Trotter said.

Trotter and other genealogy experts shared their tips for unearthing your roots, from the use of archives to DNA tests and by tapping storytellers in the family:

'Start with what we know'

Blogger Judy Russell, famously known as "The Legal Genealogist," recommended to "start with what we know."

In an email to the Free Press, Russell said to "document our own lives. Then our parents. Then our grandparents. And so on. We move from the known to the unknown — and document every single fact so we're sure we're getting it right."

Looking to the elders in the family, even those not in your direct lineage can prove useful.

"Get as much of that info down, and then start trying to find records to support, or sometimes, refute the family stories," Trotter said.

Ancestry.com is a paid database with billions of online records. A free trial is available.

Family Search is another free resource. Alongside record databases, the website has a user-friendly format where researchers can enter what they know about their families and the website pulls everything it finds. The website also has kid-friendly activities relating to the study of family history.

Michiganology is the online branch of the Archives of Michigan at the Michigan History Center in Lansing. Another free resource, Michiganology's records include state censuses, Civil War information, maps, photographs, and films.

Libraries and genealogical groups host how-to seminars on tracing lineage throughout the year. These, Trotter said, can be a good place to learn how to use some resources.

There are also genealogy-interest Facebook groups, which provide a community of support in journeys of research.

Trotter also runs a personal genealogy blog, www.genieroadtrip.com, where she keeps track of her findings through the decades. Trotter has even stumbled upon a lost family connection in the comments section of her posts. Keeping up with her blog has been a way for Trotter to see if anyone out there is "working on the same family."

Ancestry.com has a DNA component. Users submit a saliva sample, and using an autosomal DNA test, which tests for both paternal and maternal lines, shows whose DNA matches with the user from their database, according to Ancestry's website.

The test also tells users about what areas of the world their ancestors came from. Geographical markers can help direct genealogists to where to look for historical documents.

"I think that's an important companion. You're always going to have to wind your way back to the records though," Harvey said.

Other DNA test providers for genealogy are 23andMe , MyHeritage and LivingDNA .

Some people have a harder time researching their family tree because not all records were created equally.

"My mother's family is easy to trace because they're very white, so I've actually traced her family back quite a ways, which you can do," Trotter said. "Dad's family, I have traced them pre-1870, which people always think is a brick wall for African American research."

Paper trails for African-Americans dwindled before abolition in 1865, as enslaved people had few records. They were given English names, forcibly taken from homelands, and were banned from marriage.

"This entire population isn't even recorded on the U.S. Census until 1850, and then only as tick marks on the slave schedules under the names of the enslavers. The task of their descendants is much harder than it is for other populations who were free, create records in their own names and more," Russell said.

While it was harder, Trotter said it was still possible.

For her father's line, Trotter said that she had to keep in mind the mindset of that time. Since enslaved people were treated as property, Trotter said she looked in records involving goods exchanges.

However, Trotter said to still look in records you normally would.

"Don't throw out those resources assuming they didn't have enough money to ever show up in those records," Trotter said.

She also encouraged researchers to look into records for people the ancestors associated with, in case they were mentioned in wills, probate records or land patents.

"You don't just research only the people in your direct line. You always want to research the community, the people that they associated with," Trotter said.