To shake hands or not? 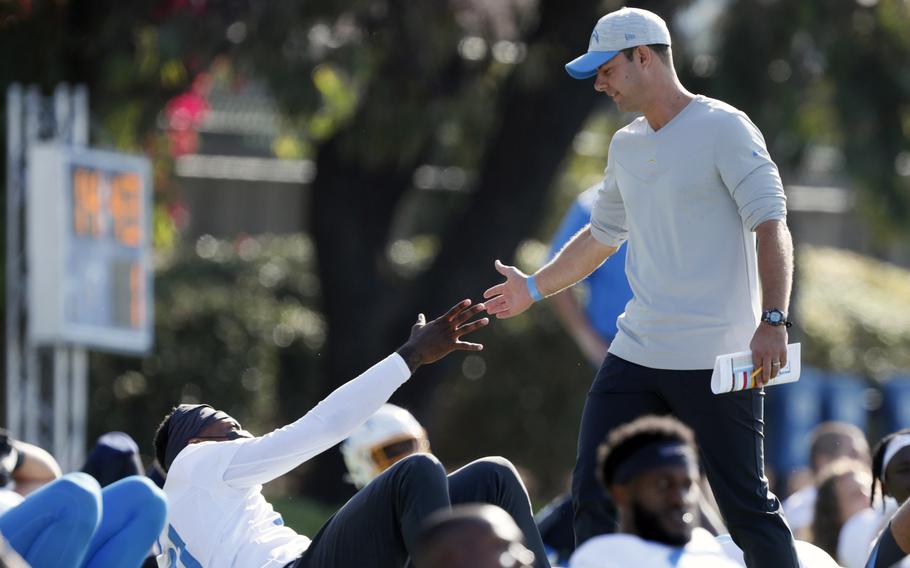 “We didn’t want the sticker to say, ‘We Don’t Shake Hands’ because that is kind of off-putting,” said John DeLeon, vice president of operations and sales at MTI Events, adding that the idea was that anti-shakers could simply choose not to wear one of the stickers. “But if someone had the sticker on in that group, then that was the indication that it was OK.”

Now, as workers return to the office, friends reunite and more church services shift from Zoom to in person, this exact question is befuddling growing numbers of people: to shake or not to shake?

The handshake has been around for centuries. A widely held belief is that it originated to prove to someone that a person was offering peace and not holding a hidden weapon. But hands can be germy — coated with fecal matter and E. coli.

Dr. Anthony Fauci, the nation’s leading infectious disease expert, cautioned last year, “I don’t think we should ever shake hands ever again, to be honest with you.”

On the other side is Dr. Amesh Adalja, an infectious disease specialist at Johns Hopkins University. He thinks the whole shaking controversy is overblown. The solution, he says, is simple: “If you are worried about COVID, the best way to make handshakes safe is to be fully vaccinated. And for any other things that might be on people’s hands, just wash your hands before you touch your face. That is what hand sanitizer is for.”

The greeting is almost instinctual and hard to deny. But remote workers who have been holed up in makeshift kitchen and bedroom offices have been denied it for months. Meetings, birthdays, retirement parties and even funerals have been shifted onto Zoom. The loss of connections has been heartbreaking, and the resurgence of the delta variant is raising fresh questions about the return to something resembling normal.

DeLeon isn't sure the handshake is ever coming back. The stickers his company sold were never hot sellers. Other companies hawked signs and stickers that more firmly discouraged handshaking — including one featuring a skeleton hand and another covered with COVID-19 germs.

“I played golf with a guy the other day, who I had never met and we got along really well. And on the 18th green it is traditional that you stick your hand out and you take your hat off and you shake hands with who you played with,” he said. “And we just kind of stared at each other and fist-bumped and walked off.” 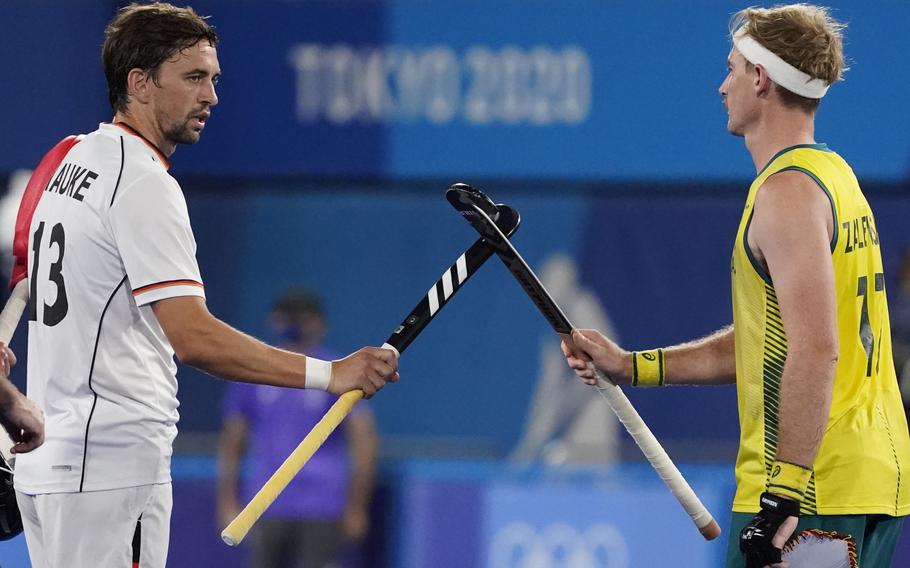 Haas driver Mick Schumacher of Germany, left, and Red Bull driver Sergio Perez of Mexico greet each other with a fist bump as they attend a media conference at the Silverstone circuit July 15 Silverstone, England. (Mark Sutton/AP) 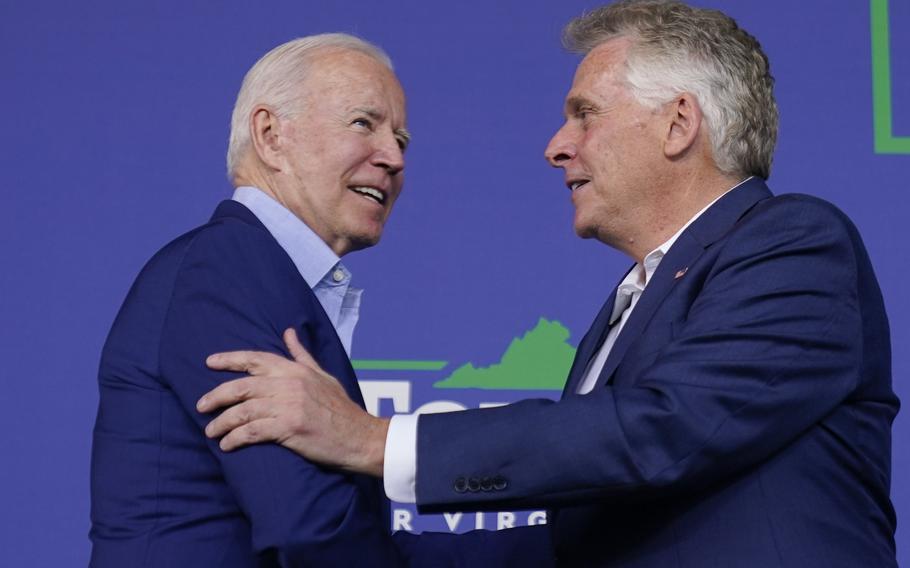 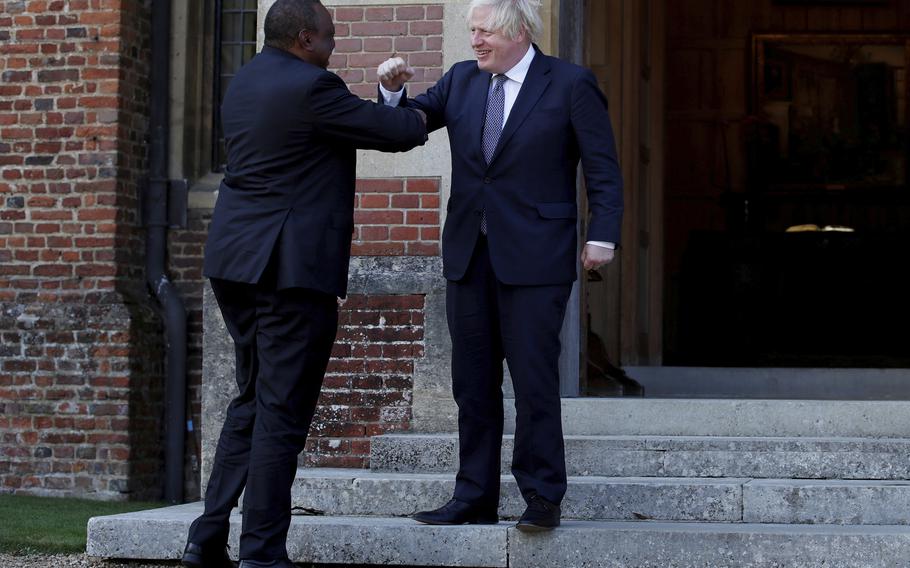 Not so fast, say etiquette experts and businesspeople like Dave McClain, 52, of Overland Park, Kansas. McClain recalls coming across one of the “I Shake Hands” stickers at a networking event and slapping it onto his shirt.

“You can make phone calls all you want and you can meet with people online via Zoom call but it is just not the same as being able to reach out your hand and shake their hand, look them in the eye and really establish that rapport,” he said.

Diane Gottsman, a national etiquette expert and author of “Modern Etiquette for a Better Life,” also doesn't think the handshake will be a casualty of the pandemic but said to take it slowly.

“Don’t be the first to extend your hand, even if you are comfortable,” instructed Gottsman, who lives in San Antonio, Texas. “Watch the other person and allow them to extend their greeting of choice.”

Former President Donald Trump, a self-described germaphobe who has said publicly that he dislikes the custom and even described it as “barbaric,” faced criticism in the early days of the pandemic when he continued shaking hands.

The administration of President Joe Biden initially took a much more socially distanced approach to the pandemic. But following the relaxation of federal guidance on masks and more widespread availability of vaccines, handshakes and even hugs have returned.

Lizzie Post, the great-great-granddaughter of the late etiquette maven Emily Post, said the country is entering an awkward time similar to the start of the pandemic, when people were trying to evaluate how much others were socially distancing before getting close to them.

Now the question is whether family, friends and business associates are vaccinated. Her approach is to announce up front that she is, then ask bluntly whether a hug or handshake is desired.

She doesn't think the handshake is going away.

“It is a really hard greeting to deny because it has been so ingrained since we were kids or young adults,” said Post, who lives in Burlington, Vermont. “And I see that being more powerful than the past year of not practicing it because for many people that past year also was spent just so not in contact with anyone they would shake a hand. It is not like you and your roommate shake hands every time you walk in the door.”

But she said that also is getting questions about how to ditch the shake on the podcast she produces with her cousin, Daniel Post Senning, called “Awesome Etiquette.”

Business Law Southwest, which advises businesses in New Mexico, Arizona and Texas, offered at the beginning of the pandemic to help create new workplace guidelines — such as a no-handshake policy. But there wasn't interest, said Kristy Donahue, a company spokeswoman.

“At the end of the day, people crave human interaction and human touch, and you know that psychology experiment where they have the monkeys and there were some monkeys they never petted and some that they did. And the monkeys that weren't being handled kind of withered away,” she said. “We haven’t evolved that much from there.”