Food-shaped pool floats are getting ridiculous 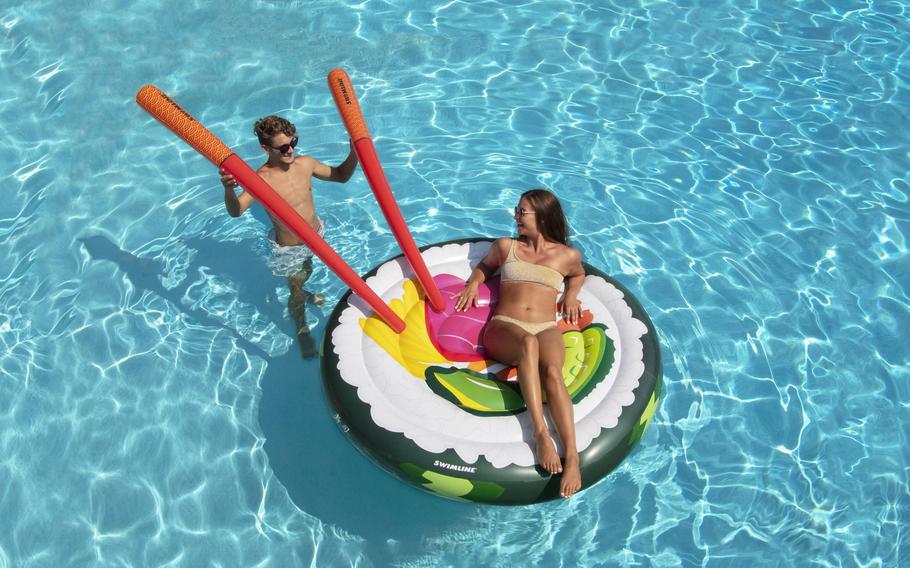 Consumers are looking for evermore niche-y float shapes, all the better to distinguish themselves poolside — or more importantly, on social media. (Swimline Corp./The Washington Post)

This is the way a trend peaks. Not with a bang, but with an inflatable, megasized plastic Crunchwrap Supreme.

A pool float in the shape of the popular Taco Bell concoction — yes, it's a real thing that you can purchase — might just be the sign that summer of 2021 is the high water mark for novelty food-related pool accessories. And if the Crunchwrap Supreme did not deliver this message forcefully enough, perhaps we should examine the additional evidence: the six-foot-long blowup version of In-N-Out Burger's iconic french fry container for sale on the fast-food chain's online merchandise store (it's currently sold out). Or Panera's new pool float crafted to resemble the bread bowls in which the sandwich company serves piping-hot soup (because who doesn't want to think about molten broccoli and cheddar in the midst of a heat wave?).

Or the giant avocado with a "pit" that pops out and doubles as a beach ball. Or the set of four waffle segments that you and your lounging friends can arrange to resemble a just-out-of-the-iron breakfast spread. Breakfast, you say? Why, you can bob along on turquoise waters atop sunny-side up eggs, bacon and pancakes (one model of the latter includes a headrest in the shape of a pat of butter. Or on a veritable orchard of fruits. Or a block of ramen noodles.

"Until two or three years ago, you could make just about anything, and the consumer would gobble it up, no pun intended," says Kieran Glackin, vice president for sales of Swimline, a New Jersey-based company that makes pool accessories. "Now people are really looking for the unique float."

Glackin ticks off the food-themed classics of the genre. You've got your pretzels, your ice cream cones, your pizzas. About those slices? He helped invent them, he says. He was brainstorming ideas with a buyer, the hipster chain Urban Outfitters, and the group asked themselves a question to prompt ideas: What would be the funniest thing to see floating in your pool the morning after a raging party?

And thus the oft-imitated pizza float was born. He even designed a variation where multiple slices could tie up together to form a pie, with a hole in the center allowing swimmers to plunge through. He has spotted his design on TV commercials for cars, online investing — and for Domino's.

This year, to meet the increasing demand for novelty, he debuted a floating island that looks a sushi roll, complete with a set of inflatable chopsticks that serve as pool noodles.

Lisa White, the creative director and director of lifestyle and interiors at international trend-tracking firm WGSN, says pool floats have been on her radar for years. She says this summer food floats are hitting a little differently. They're a celebration of fun foods after a pandemic year in which eating was often a source of anxiety. "We've just gotten through the pandemic, where food was the baseline — if you could put food on your table, you were OK," she says. "Now we can be more playful with it."

And she agrees that consumers are looking for evermore niche-y float shapes, all the better to distinguish themselves poolside — or more importantly, on social media. White notes that doughnuts have long been a staple float — for good reason, since their shape lends itself to the format. But basic isn't good enough these days. "Now, instead of that pink frosted one that you've seen everywhere, you might have a maple-bacon one," she says.

We've come a long way since 2015, when Taylor Swift posted an Instagram photo of herself and then-boyfriend Calvin Harris atop a giant swan, an image that simultaneously confirmed the couple's nascent romance and officially launched the mania for photogenic pool toys that were once the domain of the kiddie pool.

Swift-inspired swans reigned the market at first, followed by flocks of other creatures. Unicorns, flamingos and butterflies became staples of Instagram feeds.

Now, irony and individuality abounds. Which helps explain the In-N-Out float. The red-and-white "fry boat" essentially turns its contents (the person lying on the lounger) into a pile of crispy potatoes — a fun visual trick that looks great on the 'gram, which is generally the point.

Adam Khalil, the food and beverage director at the Ace Hotel & Swim Club in Palm Springs, Calif., has seen his share of floaties. But a recent bachelorette party with a taco theme, replete with a two-person folding floating taco, was a first even for this veteran. He figures it's a social media play. "These floats are fun and funny for people to use in general, and then when they post to Instagram they can use the corresponding food emojis to take it all over the top," Khalil says.

You might want to enjoy the food party while it lasts. White says eventually, the trend of colorful plastic gear that might not survive a rowdy girls' weekend, let alone a summer, is likely to fade as consumers become more environmentally conscious. "I see the trend probably peaking within the next year or two," she says. "But right now, all we need is optimism — you don't have to feel guilty about a pool float."

And Glackin says that after six years of resting their heads on pizza crusts and butter pats, his customers increasingly just want to be really comfortable, and many are seeking out (gasp!) function over form. "People really do want to relax and lounge," he says.

For now, though, this hot vax summer will find plenty of people flexing atop plastic dill pickles and hot dogs, simply because they can, and because food is one of the biggest topics of conversations. "It's just a fun, floating expression of the zeitgeist," Khalil says.