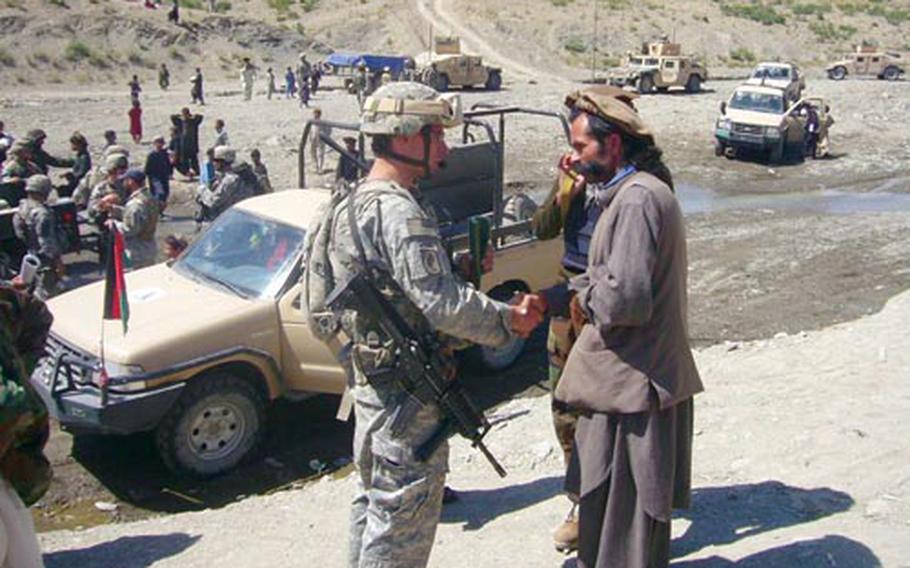 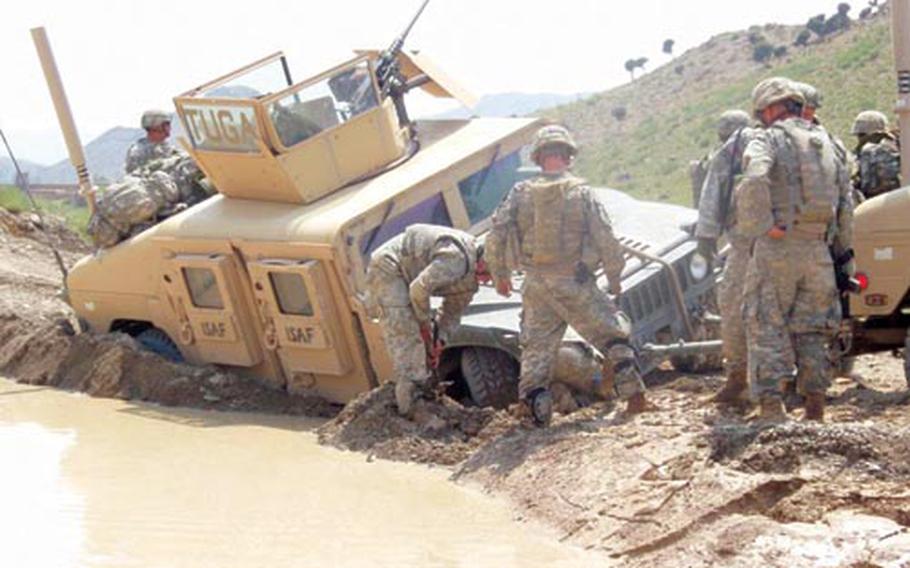 Soldiers from 1st Battalion, 503rd Infantry Regiment had to deal with a variety of weather conditions during their 14-month tour in Afghanistan. Here, soldiers from Company A have to get their Humvee out of the mud where it got stuck during a mission. (U.S. Army) 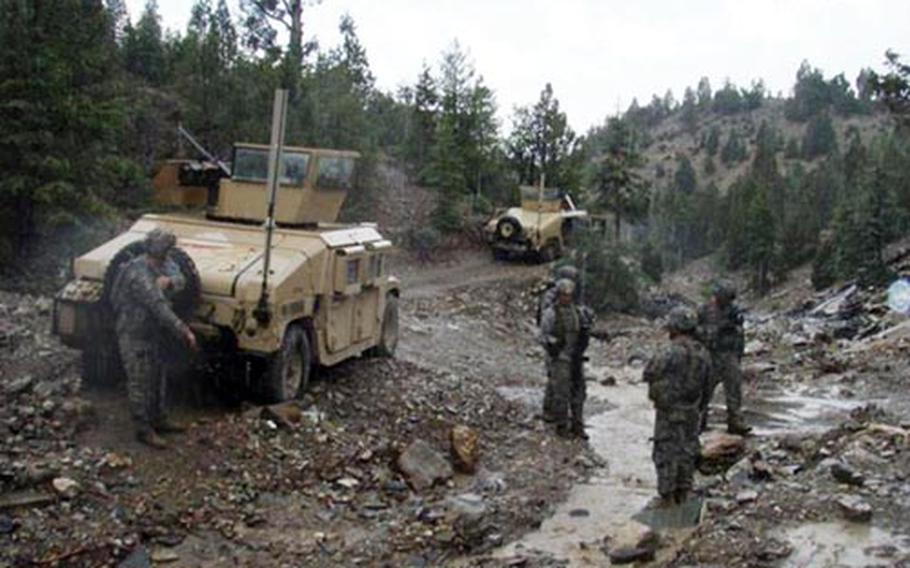 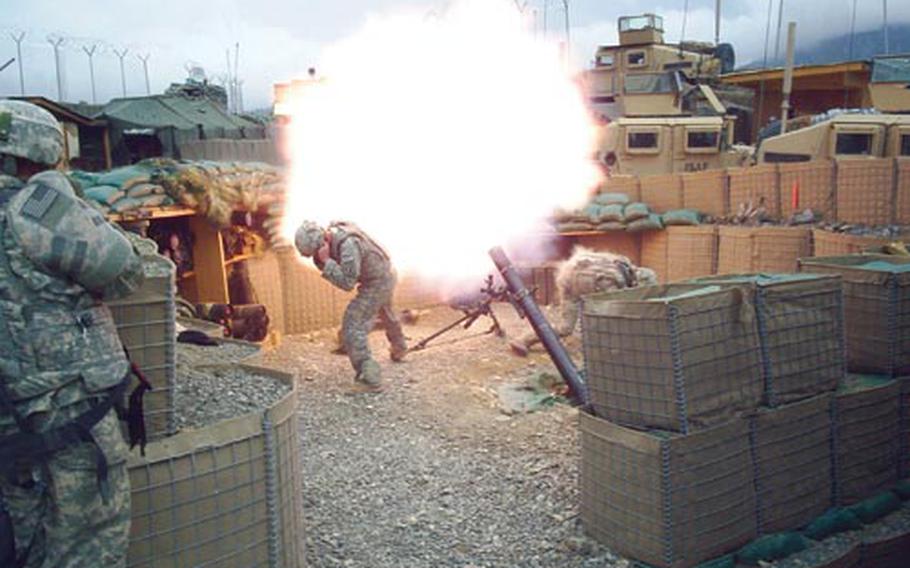 Mortarmen fire off a round at Malekshay Combat Outpost in Bermel District. Soldiers manning the mortars were kept busy during the deployment, firing off thousands of rounds. (U.S. Army)

he numbers speak for themselves.

Nearly 21,000 artillery or mortar rounds fired. About 350 instances that soldiers from the 1st Battalion, 503rd Infantry Regiment were fired upon by enemy forces. Twelve American soldiers killed in action. Fifty-nine others seriously wounded.

But Lt. Col. Mike Fenzel, commander of the Vicenza, Italy-based battalion that has served in Paktika province since May 2007, would like to go beyond statistics.

He waved his hand across a map in his office during a June interview at battalion headquarters at Forward Operating Base Orgun-E. He pointed to the half-dozen combat outposts near the Pakistan border that the battalion has either built from scratch or refurbished during its rotation.

The plan is to turn over the posts to members of the Afghan National Army or Afghan Border Police as soon as they&#8217;re ready to defend them, Fenzel said. His battalion spent 25 of the past 40 months in the province and were definitely ready to go home at the end of their tour.

And not just on the battlefield.

"We&#8217;re fighting on the border, so all the economic development can happen in the interior," he said.

Afghanistan, one of the poorer countries on the planet, stands to benefit from even simple projects. Fenzel said that when the battalion first came to Paktika in 2005 there wasn&#8217;t a single kilometer of what someone from the States or Europe would consider a road. There are now 400 kilometers of navigable stretches.

The battalion surveyed the population and estimates that only about 3 percent of residents are literate in any language.

So it partnered with the University of Nebraska and Columbia University to set up education centers in the towns of Orgun-E and Sharona. Teachers will be trained there, and in turn, train others.

Floods devastated the area during the battalion&#8217;s first rotation in 2005-2006. So Fenzel spent $240,000 on a water study conducted by the Army Corps of Engineers to survey the area and identify potential projects. About $69 million in projects &#8212; including three spots for major dams &#8212; were identified. Projects would not only help control floods, but bring water to isolated villages and allow for more cultivation of fields.

Fenzel said the study is essentially a menu that either future rotations or other organizations &#8212; such as the World Bank &#8212; can pick from, funding projects that will improve the lives of people in Paktika province.

Unemployment is high. Most of the educated leave for Kabul to lead better lives. That leaves behind mostly poorer, uneducated farmers or shepherds.

"We&#8217;re in an agrarian area," Fenzel said. "We want to make them better farmers than they were before."

So with the help of the State and Agriculture departments, farmers were given seeds. Trees were planted and experts gave them advice on how to better manage their crops.

For all those activities to flourish, though, there has to be relative peace in the area. And that hasn&#8217;t happened yet.

Fenzel said that his soldiers fought enemy forces since the day they arrived. Paktika, roughly the size of Delaware, shares a 400-kilometer border with Pakistan. After determining there were two main routes that insurgents were using to enter and exit the country, the battalion moved to seal them off.

Elements from Company A manned a combat outpost in Spera in the northeast.

"The movement of the enemy after that in that area has dropped to about zero," he said. The base faced numerous attacks from those who would like it to go away.

To the south in Bermel, troops countered enemy activities from FOB Curry, an outpost renamed after 1st Sgt. Michael Curry, killed by a roadside bomb July 23 with four other soldiers. The base is in the central part of the sprawling Gamal district, with the border several hours away. Fenzel said that future rotations would have to push out further if they want to seal the border.

Curry was one of 10 soldiers to die from injuries from roadside bombs. Eight were assigned to the battalion and two to the 1st Squadron, 91st Cavalry Regiment. Two others died as the result of direct fire. Pfc. Brian Gorham was killed Dec. 31, and no other American soldier died or was seriously wounded for the next six months.

But Fenzel bristled at the suggestion that his battalion has been in a bunker mentality.

"We are getting after it," he said. "We&#8217;ve killed probably 300 fighters in that span. We have not slowed down one bit and, if anything, have increased our ops tempo."

Much of the major fighting was done early on in the rotation, though.

Capt. Chris Hammonds, the current Headquarters and Headquarters Company commander, led Company A on Sept. 11, 2007, during one of the longest firefights of the rotation. He was leading a convoy to Sra Kunda that chanced upon enemy combatants.

"I think they were just trying to get back into Pakistan without us seeing them," he said. "We put everything we had on them."

That included the convoy&#8217;s firepower, artillery support from nearby outposts as well as air support. The three-hour confrontation left about 30 enemy fighters dead, Fenzel said.

He said one reason the battalion hasn&#8217;t had extended battles this spring is because of the fighting they did last summer and fall.