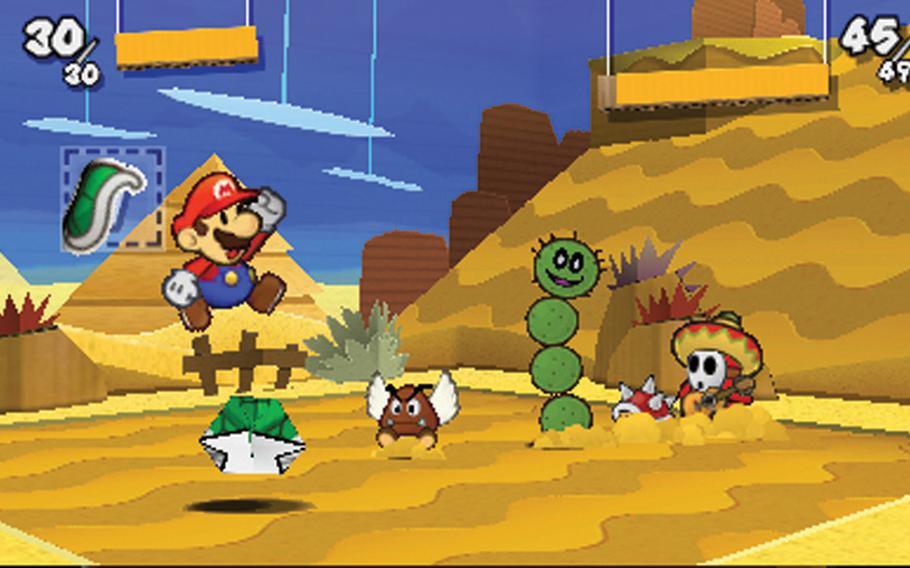 Battles in "Paper Mario: Sticker Star" can become very tedious as they deplete your sticker inventory and offer very little reward in return. (Courtesy of Nintendo)

Battles in "Paper Mario: Sticker Star" can become very tedious as they deplete your sticker inventory and offer very little reward in return. (Courtesy of Nintendo) 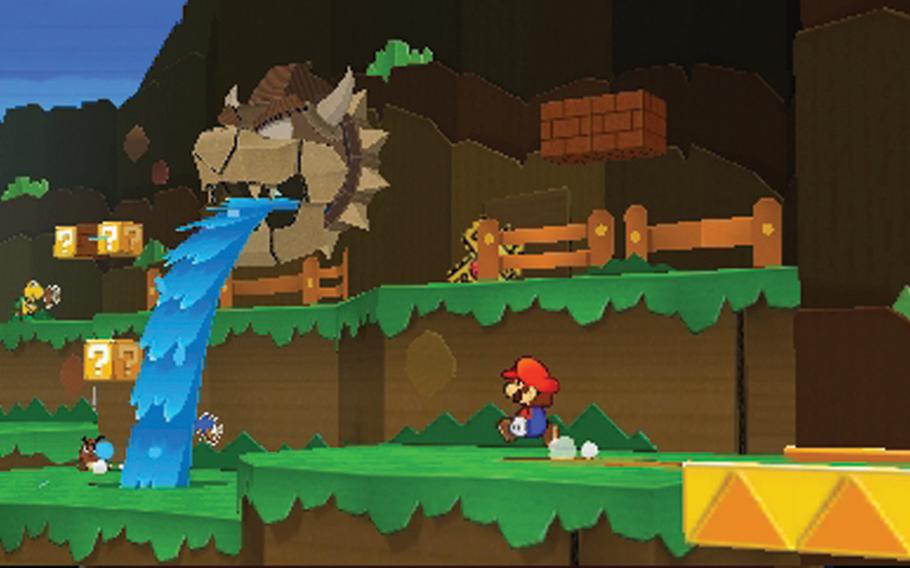 The world in "Paper Mario: Sticker Star" features a bevy of secret doors that can only be opened using stickers from your battle inventory. (Courtesy of Nintendo) 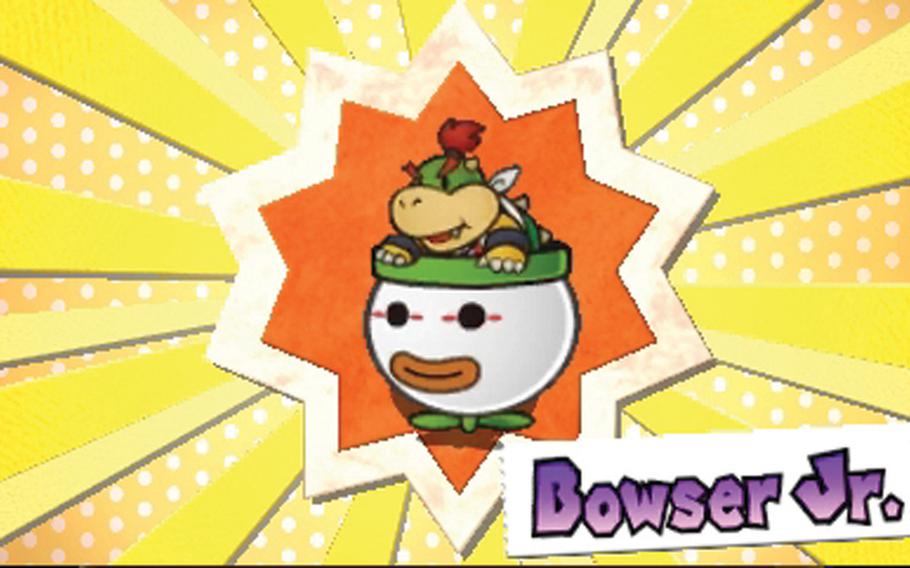 In most RPGs, battles result in rewards. Experience points or special loot — it’s a bit like getting a gold star after a hard exam. Battles in “Paper Mario: Sticker Star,” a holiday release on Nintendo’s portable 3DS, take a different approach. Not only do they deprive you of the star, they snap your pencil in half and tell you to get ready for the essay portion.

Despite coming from a proud, long lineage of Mario RPGs, “Sticker Star” eschews the well-written, clever plots of past games and a traditional battle/reward system and replaces them with a bizarre item management nightmare more akin to survival horror games.

“Sticker Star” is yet another offshoot for our jumping plumber. In the Paper Mario series, now on its fourth game, Mario and Co. are characters flattened to paper-like proportions. Their world is still three-dimensional, however, so when Mario, a koopa or Peach turn sideways, they nearly disappear, much like, well, a piece of paper.

It’s a neat visual play on the idea of Mario as a 2-D character, and most of the games in the series serve up a funny, earnest plot and traditional role-playing game mechanics to back up the visual style. “Sticker Star” keeps the cool visuals, but drops everything else.

Bowser has crashed a sticker celebration, sending thousands of valuable stickers across the land. Mario must find the stickers, and fight in “RPG” mode along the way — a battle where your character and the opposition take turns pulling out your best attacks or spells to shave off your opponent’s hit points.

The adventure is split across a world map, more akin to what you find in “Super Mario World” than a normal RPG, where the levels blend into each other to create a sense of continuity. There’s also curiously little time spent on dialogue or plot as you piece together why these stickers are so important — leaving you without a sense of purpose for your mission. In place of these things are more settings for exploration. Hidden doors and secret passages can be found in every level, and moderately difficult platforming puzzles abound.

Plastered throughout the game’s levels are various types of stickers, which, when they’re not being used to solve some strange puzzle, are doubling as a basic “fight” currency.

The sticker system serves to limit how many times you can perform certain actions. Whereas most games will let you do basic things as many times as you want, like “jump” or “swipe” to attack, “Sticker Star” makes you spend a sticker from your limited inventory to do any damage, no matter how slight. Imagine if you could only jump in Super Mario Bros. eight times. To get more jumps, you had to go back to the main menu, buy eight more, and then try again. Through this very simple change, “Sticker Star” actively discourages you from battles.

It quickly gets old to slog through each level, not doing much more than plastering stickers in random places to see where the secrets are. And as painful as it is to get drawn into a fight, it’s equally — if not more — boring to carry it out.

There are stickers for jumping, and others for jumping with a larger shoe. Some stickers hit with a hammer; others hit with a different color hammer. Still others turn shiny, and Mario can pick up 3-D objects from the world and turn them into big stickers that do “special” attacks. This, too, turns fighting into another set of banal choices. Will you use the rotating house fan? Maybe it’s time to pull out the water spigot!

After you beat a baddie, it might drop one replacement attack and a few coins, but generally, your inventory gets depleted as you make your way across a level to an area boss. Mario can generally only hit one enemy with one attack with most stickers, making group battles very tedious. Boss battles tend to revolve around creative sticker inventory management. If you’re lucky, you might be able to guess which special sticker each particular boss is weak against, allowing you to hit for extra damage.

But it’s better to be smart than lucky. There are better RPGs, even Mario ones, to spend your time and money on.

Bottom line: “Sticker Star” is a study in what happens if you strip everything from a game except the mundane.