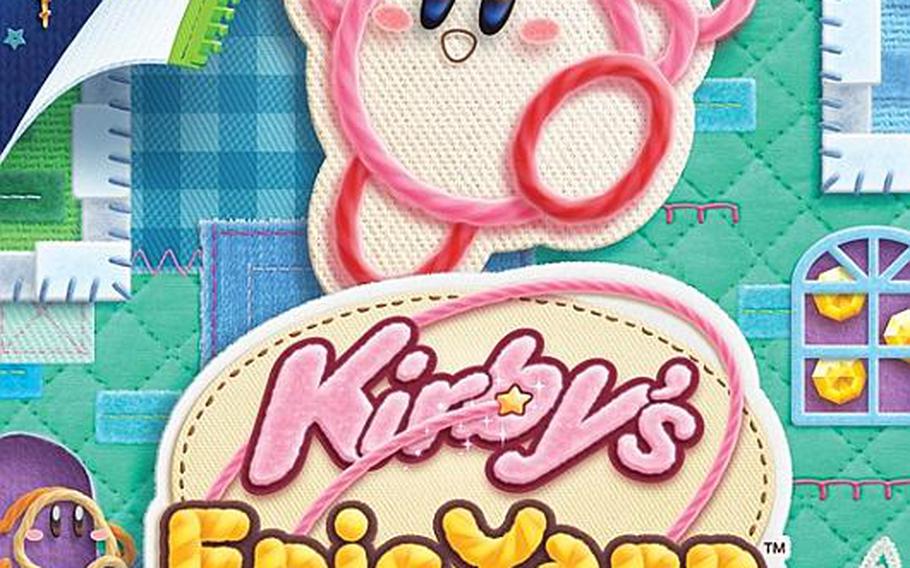 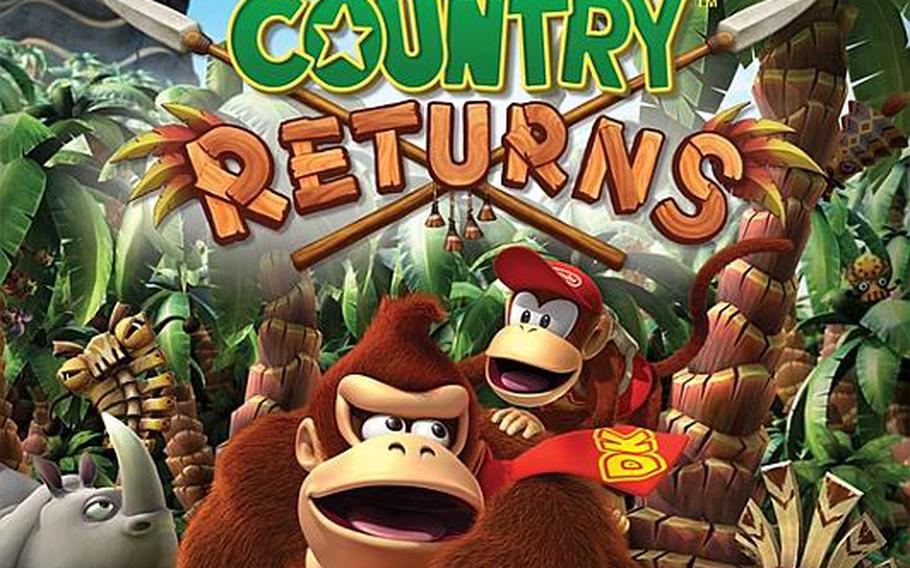 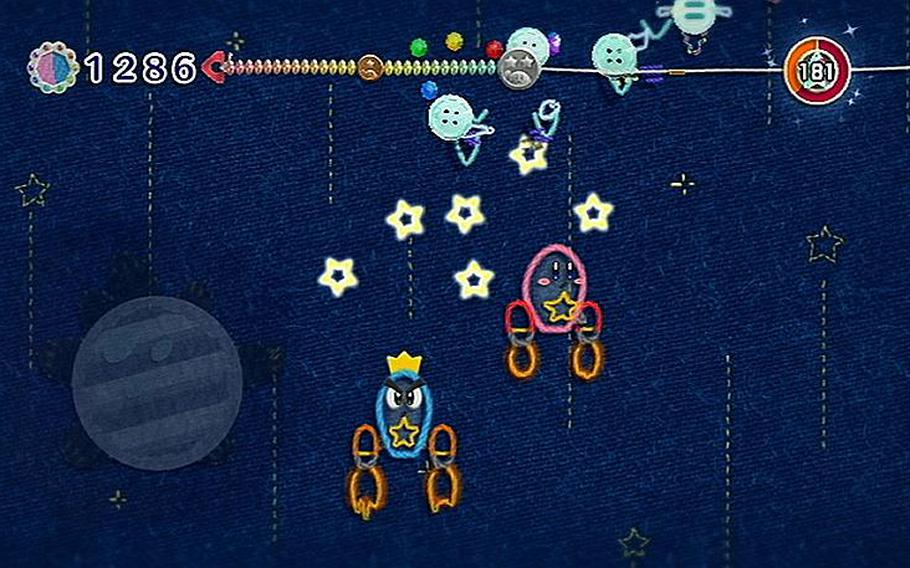 In 'Kirby’s Epic Yarn,' a storybook tale sends pink fluff ball Kirby into a world of fabric and texture. (Nintendo) 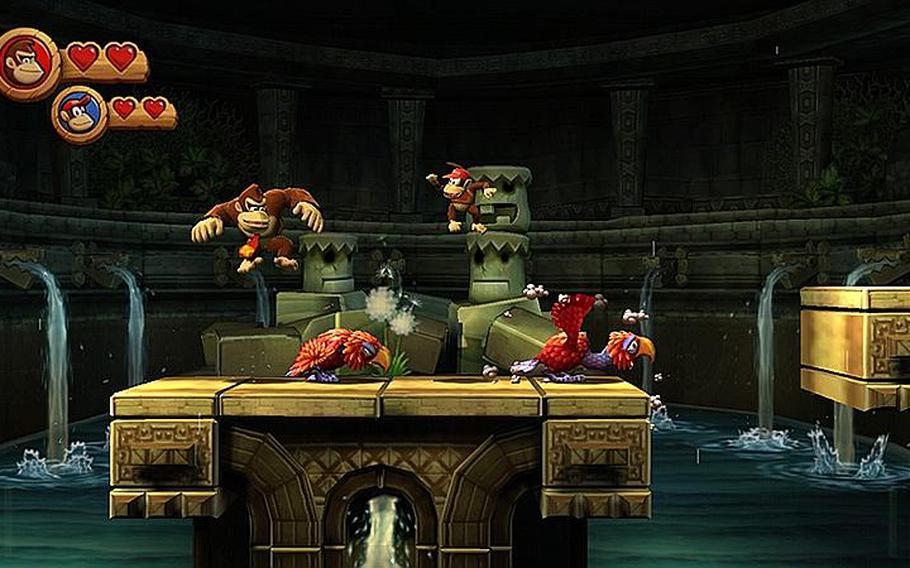 In 'Donkey Kong Country Returns,' Donkey Kong and pal Diddy team up again to round up the millions of bananas stolen by a possessed band of plantain-loving fiends. (Nintendo)

In the last 35 years, the avoidance of death has been the primary motivator in the vast majority of games, regardless of genre — be it “Halo,” “Tetris” or Mario. But what happens when you take that away? Or what happens when you make a game so difficult that you’d practically need a helium factory for all of the extra-life balloons you’ll need?

Just in the time for the holidays, Nintendo released a co-op platformer on each end of this scale. In “Kirby’s Epic Yarn,” a storybook tale that sends pink fluff ball Kirby into a world of fabric and texture, there is no death. In “Donkey Kong Country Returns,” Donkey Kong and pal Diddy team up again to round up the millions of bananas stolen by a possessed band of plantain-loving fiends. Because these games’ styles are so similar, and they were released just a month apart, we’ll compare them just in case you don’t have the money for both a banana republic and yarn factory.

Kirby and Donkey Kong are old Nintendo mainstays that have been given new life with these updates. Both are co-op platfomers similar in style to last year’s “New Super Mario Bros.”

But where “NSMB” built on a tried-and-true formula with a long history of established run, jump, shoot-a-fireball gameplay, these games put a unique spin on what it means to be a co-op platformer. “DK” is now a fast-paced, precision game with lots of long action sequences and time-based challenges. “Kirby” is a laid-back collection game; the music is bright and cheerful, it’s impossible to actually die, and your main character is more likely to high-five somebody than shoot them with a peanut gun (here’s looking at you, Diddy).

Despite child-friendly approach of “Kirby,” its style is the more original of the two.

From the opening movie, where Kirby is whisked into a land of fantastical fabric (“It feels like … pants!” he says during the intro), the game’s story and visual style are expertly woven together. Levels are filled with a patchwork of moving … well.. patches. Each level is littered with beads that players can collect, sort of like coins in a Mario game.

While Kirby doesn’t take damage, he will drop all of the beads collected after just one hit.

Meanwhile, raindrops are blue strings, yarn bridges bend slightly to Kirby’s weight, and enemies become unraveled as he interacts with them. The whole experience is seamless (I promise the puns will stop soon), and very visually pleasing.

Not to say “Donkey Kong” doesn’t hold its own. Where “Kirby” takes a textured and perhaps duller-palleted approach, “DK” sees the Kongs return to an island littered with bright, saturated colors, lighting effects, and a forest teeming with little details.

The original “Donkey Kong Country,” released on the Super Nintendo, was renowned for its pre-rendered backgrounds, an effect that allowed the game to have better-than-expected graphics for its time. The new edition doesn’t need to rely on such tricks, and finally brings the series a visual flair you would expect from any modern game.

Hectic sequences will see parts of the stage crumble beneath your feet, ships fire cannons nonstop from the background into the foreground, and bugs can slowly eat up and fill your screen as you try to escape.

In other words, whereas “Kirby” is a game of slow, pressure-free exploration, “DK” is a game of action. Kirby’s visual style is minute and detail-driven. “Donkey Kong” won’t leave you a second to catch your breath before another timing-specific event comes along that promises to take away another life balloon.

Which brings us to the controls. As you might expect, Kirby and co-op pal Prince Fluff are rather slow-moving guys. Controlled by just the Wiimote held sideways, they waddle along, turning into cars with a double tap of a direction, little submarines in the water, or parachutes when jumping high above the ground.

While you can’t die, you can lose beads when you get hit. Kirby and Prince Fluff can easily throw one another around with their grab attack, which can lead chaotic accidental exchanges in more tense moments. But they can also help each other out by giving a helpful throw or use each other as spring boards. Anyone who falls off the level is lifted to the survivor by a helping fairy, similar to “New Super Mario Bros.”-style bubbles.

“Donkey Kong” is a little more challenging in co-op. In single player, one person controls Donkey Kong while Diddy Kong rides on his back, enabling one person to use Diddy’s helpful jump hovering jet-pack. In co-op mode, Diddy still gets to hover but Donkey Kong doesn’t, which can lead to some really frustrating catch-up-if-you-can moments.

New to this game is the ability to grab hanging grass, which can lead to some very cool, challenging events where the ground and ceiling alternately give way, leaving DK to quickly grab up top or leap to the next patch of stable ground.

While the game doesn’t use “New Super Mario Bros.”’s “bubble” system to save players in co-op, it does allow any player to use a life and come back into the action at any time, which helps a lot in the harder stages.

Also, just like in the original, a lot of secrets are found by “roll jumping,” or rolling off a cliff and then hopping in mid-air. Definitely something hard to perfect in the original, it’s even harder in this game. Rolls are one of three actions controlled by shaking the Wiimote. Depending on which direction you’re pressing the controls, DK will either pound the ground with his hands, blow in the air, or roll when you shake the Wiimote. This is definitely the strangest and most frustrating decision made by developer Retro Studios. On dozens of occasions, DK would run off a cliff without rolling because I wasn’t at full speed. Alternately, coming to a full stop on a platform the size of a tadpole, then holding down on the joystick and shaking the Wiimote to blow out a fire is no easy trick either. Retro should have split up these duties — rolling, pounding, blowing — to different buttons, but sadly, they didn’t.

“Epic Yarn” rarely uses any motion controls. Players do use the pointer control when they decorate Kirby’s pad in an “Animal Crossing” or “The Sims”-style side project. And in the few in-game transformations where “Kirby” does switch to pointer or motion controls, it does so well — be it spinning on a surf board, directing a train, or turning into a yarn mega tank of destruction. Again, there’s no way to die, so it’s all in the name of taking your time and collecting beads.

There are certainly times in “DK” where you’re not running, jumping and climbing for your life, and in those moments the beauty and atmosphere really come out. The soundtrack packed with a lot of familiar throwback songs, and some levels, especially the unlockable ones, give some real variety to the gameplay, something “Kirby” lacks.

And whether you’ve got all that Wiimote shaking down or not, the end result is losing a few more lives in a game that’s already pretty difficult. (Luckily, the game provides so many opportunities to stock up on extra-life balloon you could make a birthday clown envious.)

So are you ready for a serious banana hunting, or do you want to relax and spend some time surfing on a yard-board over fabric waves with the kids? As long as you know what you’re getting into, you really can’t go wrong with either game.

“Kirby’s Epic Yarn” is a game spun out of what happens when you slow a game down, take away the majority of the threats, and just have fun with what you’re seeing and doing. “Donkey Kong Country Returns” is a rhino-riding, barrel-blasting, mine-cart banana scavenging hunt, that’s one of the hardest games on the system. Either way, expect to pull out two Wiimotes and buddy up this holiday.