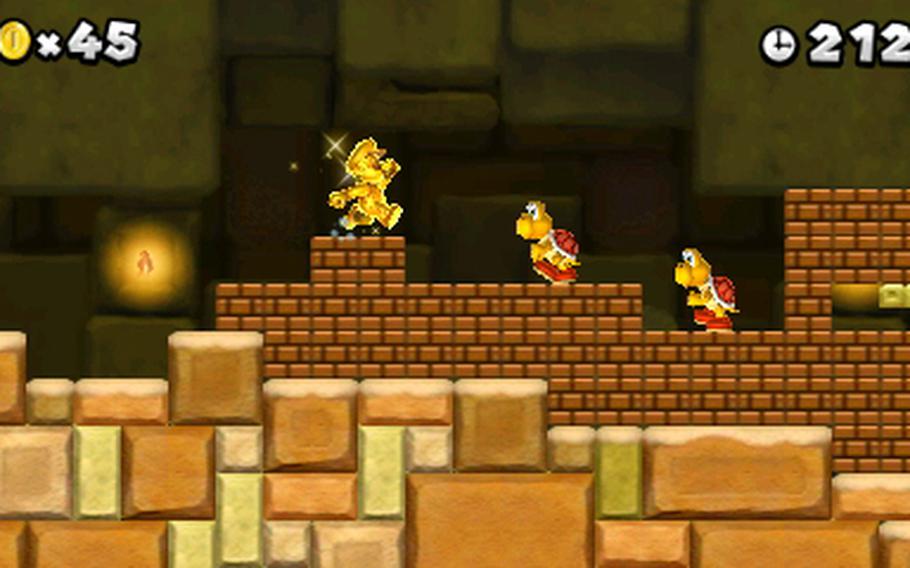 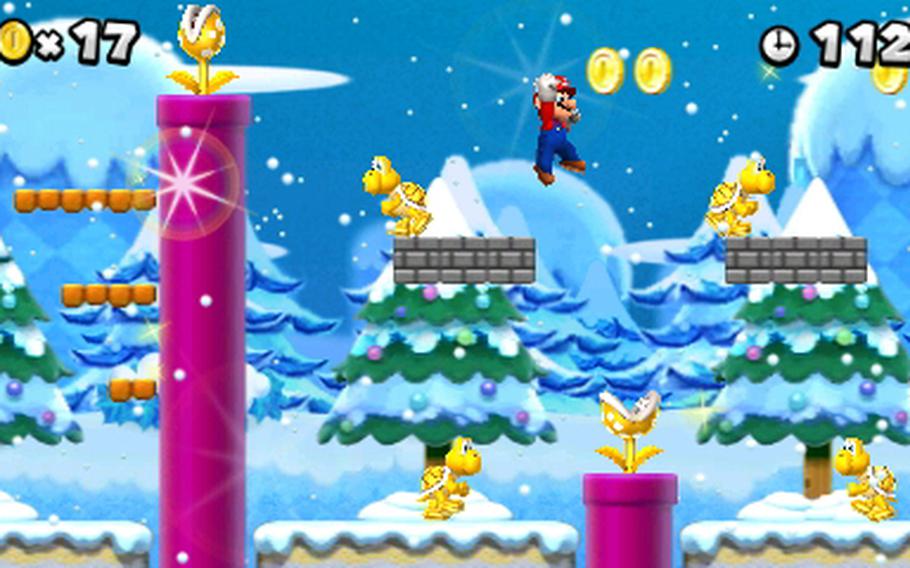 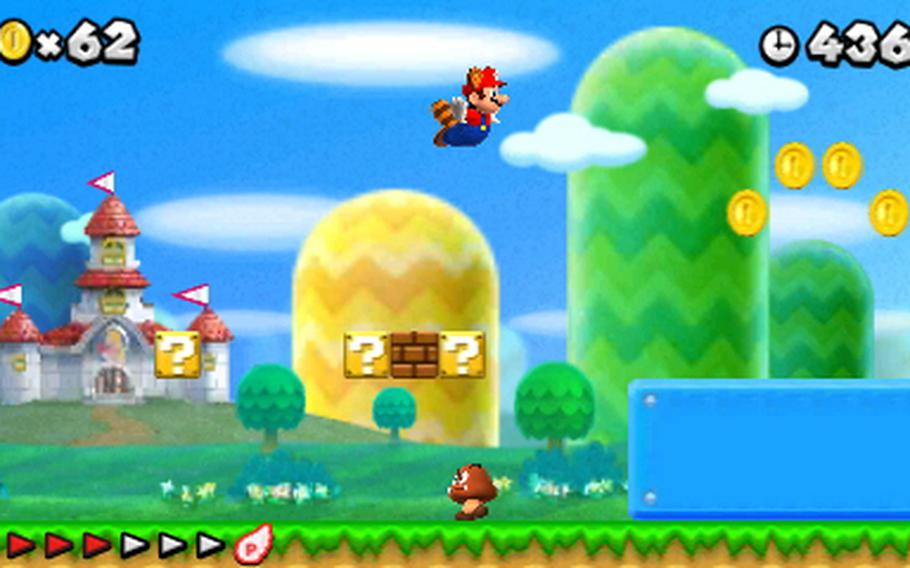 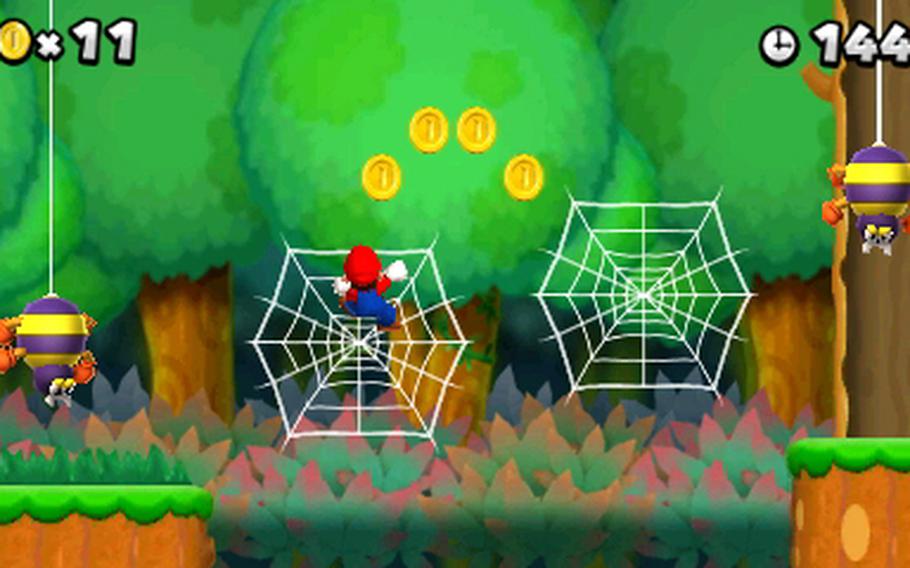 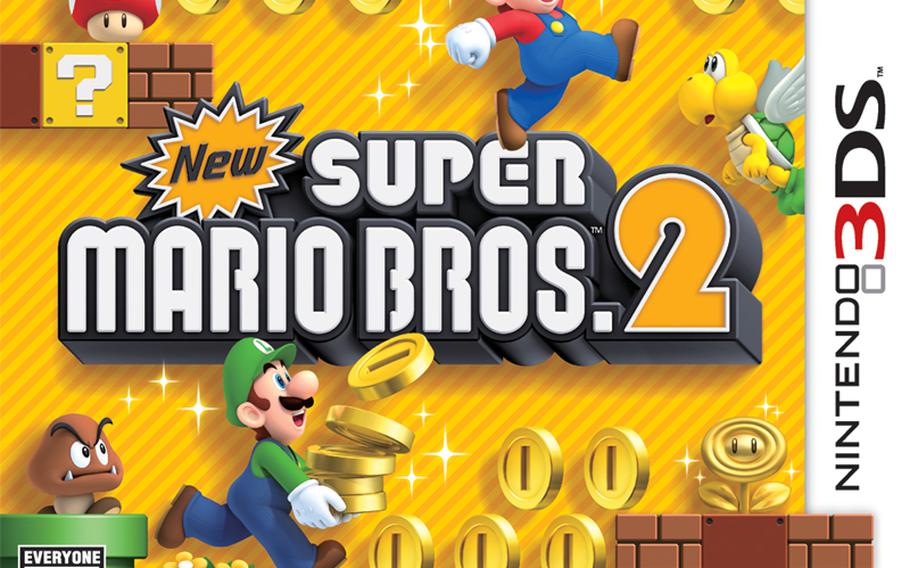 A  year ago, Nintendo sullied Mario’s good name with a plodding, bland swipe at originality in “Super Mario 3D Land.” With a laid-back, bare-bones approach to level design and a newbie-friendly difficulty, it fell flat to anyone expecting anything nearing the familiar romps through the Mushroom Kingdom. It’s never a good sign when you can beat the first half of the game without losing a single life.

Standing in high contrast and not a full year later, we have “New Super Mario Bros. 2,” the first fully downloadable new Mario title for the Nintendo 3DS, and it’s a huge relief that it’s possibly the greatest, most refined, and challenging 2-D Mario game of the last decade.

The first thing you notice about this title is Mario is seriously blinging it up. Coins are everywhere: falling from the sky, flowing through warp pipes, even falling off Mario himself. On the surface, it may seem as if Mario has a serious cash-for-gold deal on the side, but instead of relying on coins for extra lives, “New Super Mario Bros. 2” does what Mario games should have done a long time ago — it creates a high-score system.

Every level in this game saves the tally of many coins you’ve collected, and each run is important. In the new “coin rush” mode, players can pick from the “Mushroom,” “Flower” or “Star” tours and play three levels consecutively, picked at random by the game. If you can complete all three levels within a small window of time without dying once, you can save your coin score. Those scores are saved and shared with others when you StreetPass in the real world. This simple act adds a much-needed incentive to replay levels and score higher coin rushes — something many previous Mario titles have lacked.

Returning superpowers include the raccoon suit, which allows Mario to briefly fly, as well the mini-Mario mushroom, which shrinks Mario to pipsqueak size and allows him to jump higher, walk on water and enter special areas. The giant Mario mushroom also makes a brief appearance.

New superpowers in “New Super Mario Bros. 2” include a fireball and raccoon suit gold mode. The Golden fireball mode is especially rewarding, allowing you to reduce piles of bricks to piles of coins with a single button press.

The golden raccoon suit allows you to infinitely fly and become invulnerable, appearing as an optional power-up if you’ve died too many times.

And you may find yourself needing it. Not only does Nintendo throw in a few old challenges — such as timing jumps correctly while dodging Hammer Bros., Koopas, etc. — a lot of new mechanics and ideas are blended in, especially in the boss stage areas. One stage early on, for example, takes away your ability to change your speed and has Mario running full-on, leaving the player to time jumps correctly. It sounds simple in theory, but I died more times on this single level than at any point in my entire play-through of “Super Mario 3D Land.”

Features such as alternate paths and secret areas also make a comeback in a big way with “New Super Mario Bros. 2,” which will delight any fans of “Super Mario World.”

On the visual side, the Mario look, while still sufficient, could probably use a make over. Later levels show off some beautiful hand-drawn background sprites, reminiscent of something out of “Rayman Origins,” and “New Super Mario Bros. 2” would do well to include more of that throughout the game.

The biggest deviation from the norm is a slight background blur effect when adjusting the 3-D slider. But by this point, you’re probably playing with the 3-D effect turned off anyway.

The only other sour point I found was in the multiplayer mode. It requires two systems, and being that the 3DS just hasn’t sold as much as the regular DS, I couldn’t find anyone to play it with. With a few more titles as good as this, all that will change.

Bottom line: After a disappointing romp through 3D Land, “New Super Mario Bros. 2” is a golden return to form.