Kevin Purtee/ Allen Crist ‘Not again. Not if we could help it’ 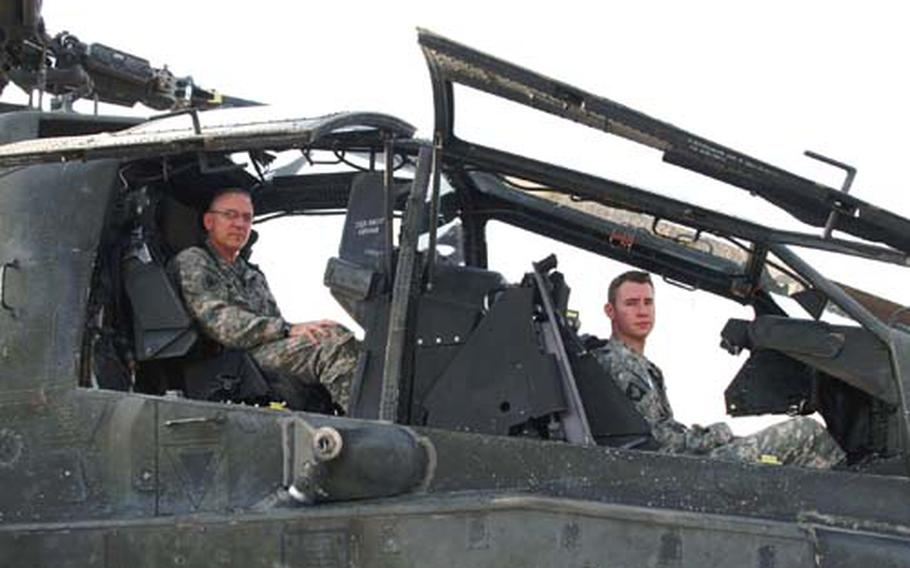 Crist gave up his seat to a soldier who had been shot in the face.

No big deal. Until you consider that the Apache only seats two, and Crist had to strap himself to the outside of the aircraft for the trip.

They had heard stories of guys dying on the battlefield for want of a medevac.

The two were flying their last combat mission in Iraq when they heard a soldier had been wounded in Ramadi and U.S. forces couldn&#8217;t get a medevac.

Purtee suggested dropping off Crist at the scene to pick up the wounded soldier, but needing to go back and find him was a risk of its own.

Crist said he felt it would just be easier if he went with Purtee and the wounded soldier and took care of him after they landed until the medics arrived.

While his training had included briefs on how to strap himself to the outside of the aircraft if necessary, he had never actually done it.

When they landed at the scene, Crist and two soldiers helped the wounded man into the helicopter.

For Purtee, the scariest moment happened when the wounded soldier kicked the control stick while getting into the aircraft.

&#8220;That causes the rotor blades to go down in the front, and they went very low and they could have knocked my night vision system off.

&#8220;And so I had visions of knocking that off and being stranded out there or tearing the helicopter up having it doing God knows how much damage and having to have someone come recover it,&#8221; Purtee said.

Crist strapped the wounded soldier in as best he could and then he hooked himself to the outside of the aircraft, sat down on the left wing, slapped the canopy glass and they took off.

Fortunately, it was a calm night, allowing Crist to enjoy an unimpeded view of the night sky from outside the aircraft.

Meanwhile, Purtee was hoping Crist was strapped on tight.

Both men were awarded by the Distinguished Flying Cross for their actions.

While some may view what they did as extraordinary, the two look at it as part of their job to help troops on the ground, Crist said.

&#8220;The people who are the real deal in Iraq and Afghanistan are those guys on the ground who go outside the wire, kicking in doors and riding in Humvees and knowing that when you roll out the gate, you may get shot in the face tonight. You don&#8217;t know. It&#8217;s a possibility.