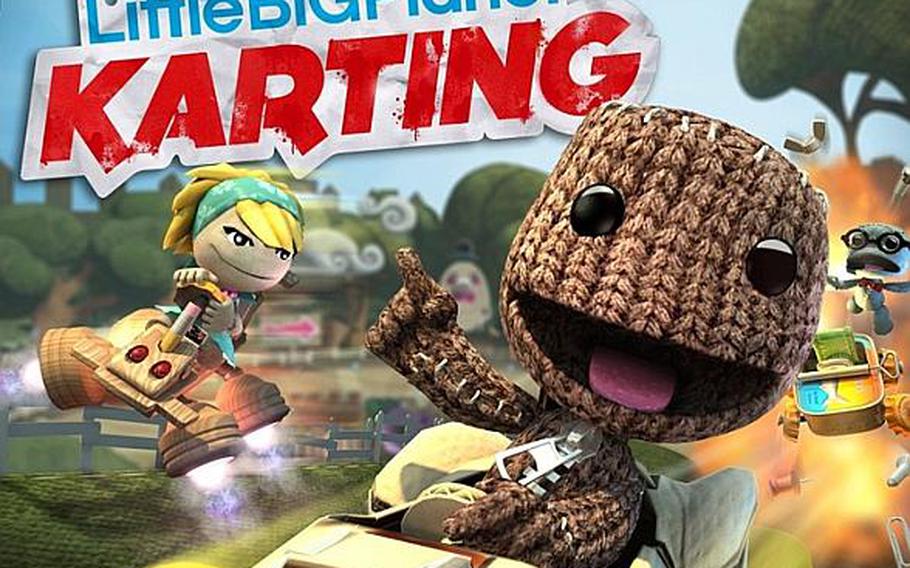 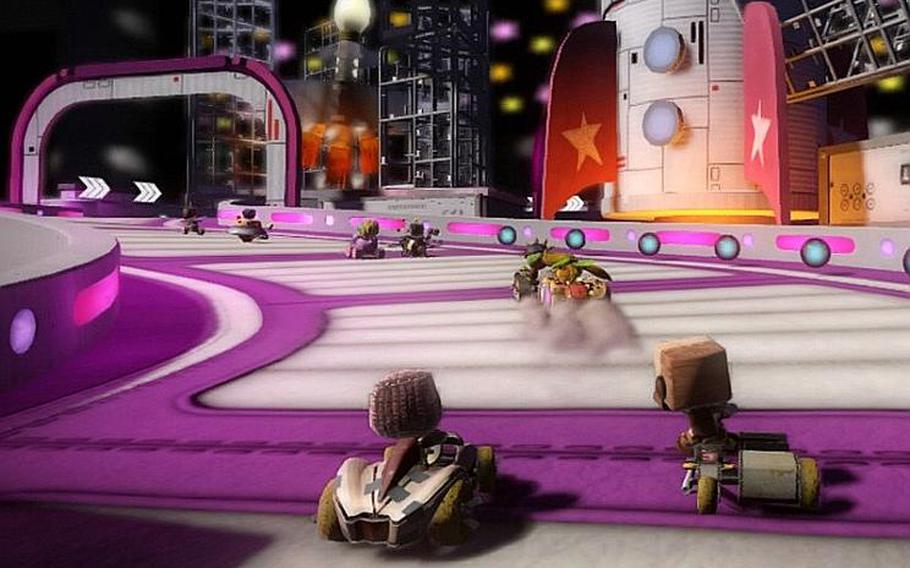 “LittleBigPlanet Karting” lets you create a Sackboy character and a kart and zip through a variety of colorful settings. (Courtesy of Sony)

“LittleBigPlanet Karting” is a well-crafted game, as I’ve come to expect from the franchise.

Fans of “LBP 1” and “2” will be able to sit down and begin playing after just a few minutes of getting used to the karting controls. “Karting” is set up identically to the worlds of its predecessors, which offered plenty of fun platforming levels to explore and allowed players to create their own levels as well as Sackboys and Sackgirls to enjoy them.

In “Karting,” races take place on various worlds that are split into different levels. You have a series of main storyline races that can be played online with other drivers as well as numerous offline challenge races.

As you complete levels, you collect items that allow you to customize your Sackboy driver and your vehicle. Each world has its own comically presented story arc with the overall storyline woven in.

At its core, “LittleBigPlanet Karting” is still “LittleBigPlanet,” but with a demolition-derby overtone. As you race, you pick up weaponizers that include mines, missiles that seek the leading racer and electric fields that reach out and pop people surrounding you. One of my favorites is the fast-forward weaponizer, which allows you to zoom up to the kart currently in third place no matter where you are in the rankings.

Karting brings enough to the table to attract a wide audience without forgetting its roots. That balance keeps you coming back for more.

By nature of it being an arcade racing game, "Karting" has action squarely in its crosshairs. It falls a little short only because it’s repetitive. As soon as you finish the first world, you already know how the rest of the game will pan out.

So, the crux of this category involves those frequent occasions where you and another racer are vying for position in those last few precious feet of track. The defensive applications of the weaponizers are important here. As attacks come your way, there’s a very brief window where you can use your weaponizer to intercept your opponent’s assault.

This game's uniqueness is the strongest quality of any in the “LittleBigPlanet” world. The sheer number of customization options for your Sackboy driver is mind-boggling. In comparison, the amount of kart customization might feel a little on the short side, but I can spend just as much time choosing which horn is right for my hovering Mayan head kart as I can spend dressing my Sackboy in his proper gentleman’s attire.

And yes, player-built tracks are an option. So if you fancy yourself a creative type or just want to see if you can make that mountain race track you’ve always wanted to see come to life, “LittleBigPlanet Karting” has the tools for you.

Bottom line: This game comes down to inspiration. The game’s player-created tracks are fueled by it, and the development team was definitely filled to the brim with it. This is a solid addition to the franchise and a decent racing game to boot.