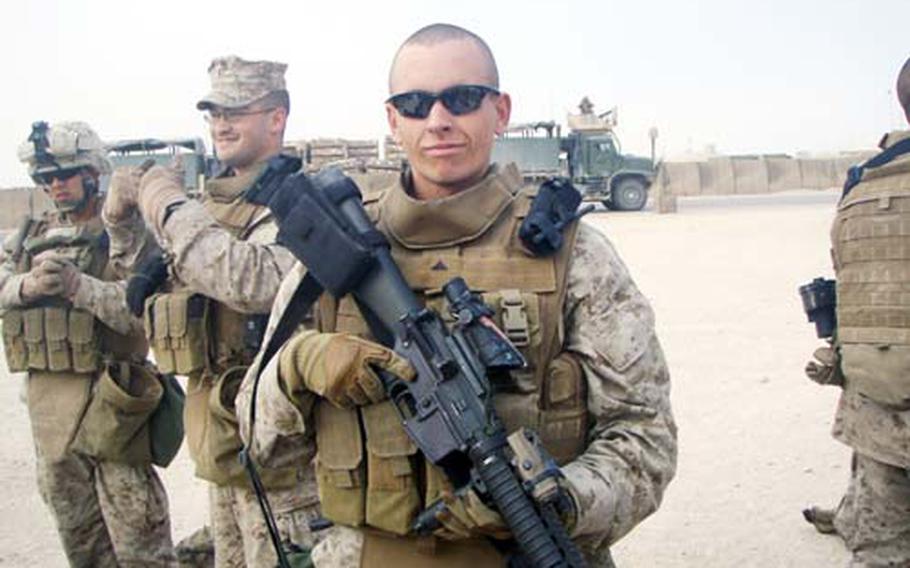 Lance Cpl. Jordan Haerter, along with Cpl. Jonathan Yale, was posthumously awarded the Navy Cross for his efforts on April 22, 2008, in Ramadi, Iraq. (Photos courtesy of the U.S. Marine Corps)

Lance Cpl. Jordan Haerter, along with Cpl. Jonathan Yale, was posthumously awarded the Navy Cross for his efforts on April 22, 2008, in Ramadi, Iraq. (Photos courtesy of the U.S. Marine Corps) 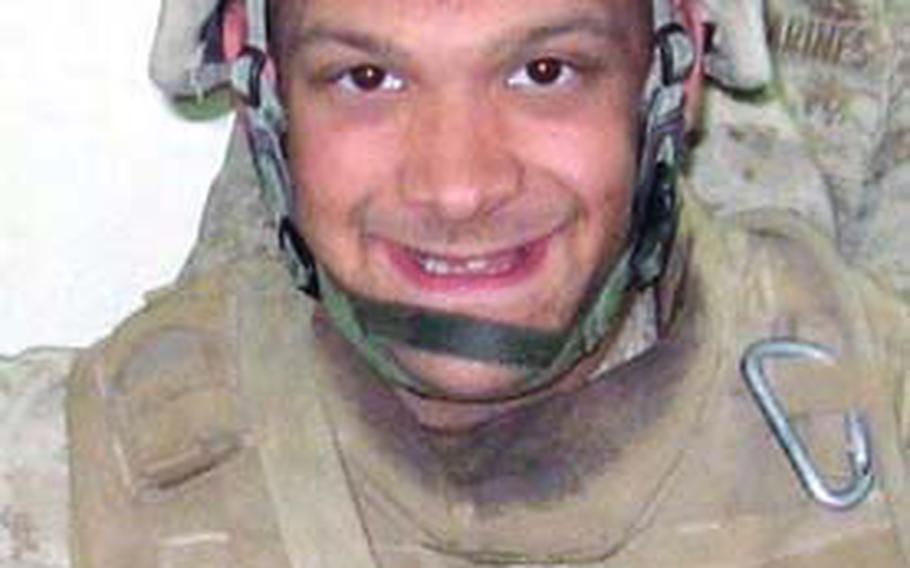 They could have run.

The Iraqi police officer did. You can see it in the video. He lived.

You can&#8217;t see Cpl. Jonathan Yale and Lance Cpl. Jordan Haerter. But you can just make out what they did that made them heroes, and gone. You can see faint puffs of smoke.

The smoke came from Haerter&#8217;s M-16 and Yale&#8217;s machine gun, fired steadily at the suicide truck bomber speeding their way. They fired, the truck slowed and stopped. And then, loaded with 2,000 pounds of explosives, it blew up.

Haerter and Yale, on guard duty that morning, were killed. But 50 others &#8212; U.S. Marines and Iraqis sharing Joint Security Station Nasser in Ramadi &#8212; who would have died had the truck traveled farther, were saved.

Lance Cpl. Mario Garcia said the blast tossed all 200 pounds of him from his cot and blew shards of glass and choking dust everywhere. He also said the pair saved his life.

"They didn&#8217;t run out. They stood their ground," Garcia said. "We&#8217;ve talked about it. Everyone has an option. They took the option to stand their ground."

For their heroism, the two were posthumously awarded the Navy Cross, the second-highest award for valor in the military services.

Which is all well and good, but not really the point, other Marines said.

That seems certain. There were stories in the newspapers about the two brave Marines and spots on television. There was the award ceremony at the National Museum of the Marine Corps in Quantico, Va., on Feb. 20.

A week later, President Barack Obama discussed them during his Iraq war speech at Camp Lejeune: "These two Marines stood their ground. These two Marines opened fire. And these two Marines stopped that truck," Obama said. "When the thousands of pounds of explosives detonated, they had saved 50 Marines and Iraqi police who would have been in the truck&#8217;s path."

There were parades, processions and, on Long Island, N.Y., a bridge renamed for Haerter. There is the Web site Haerter&#8217;s parents created, and the cover of the May edition of Soldier of Fortune magazine, with a big photo of Haerter in body armor and the headline: Marines Thwart Mad Suicide Bomber.

Their story can now be told almost by heart.

Yale was showing Haerter the ropes.

They&#8217;d just met and had little in common, other than choosing to become a Marine in 2006, when their country was at war and Iraq violence was at its height.

Yale, 21, had a hardscrabble upbringing in rural Virginia, born when his mother was only 17, and joined the Marines in part to help support his family. He was married but getting divorced, and in news reports about his death, a minister he was close to spoke about his gratitude for what good things had come his way. His mother said he was charismatic, sentimental and a cut-up.

To Lance Cpl. Brandon Creeley, Yale had an endearing "goofiness."

"He was just easy to get along with," he said.

Haerter, 19, grew up comfortably on Long Island, had a private pilot&#8217;s license before he was 18, was detail-oriented and studious from childhood, and had a girlfriend he routinely drove 1,000 miles to see.

"He was a pretty calm, cool, collected guy," Teague said.

"He was a great kid, always eager to learn, though he didn&#8217;t need much help or guidance or anything," said Staff Sgt. Kenneth Grooms, Haerter&#8217;s section leader. "I think what made him shine above other Marines &#8212; he was always volunteering. He&#8217;d volunteer to be the designated driver. ... He never drank. I think a lot of guys respected him for that."

Haerter and Yale had six seconds to react after the blue truck appeared in front of their gate, the video shows.

"None of us knows what they said to each other," said 1st Lt. Daniel Runzheimer, Haerter&#8217;s platoon commander. "They took in the facts, processed it. The training prepared them for it."

Three Marines, eight Iraqi officers and 24 civilians &#8212; all more than 100 yards from the blast &#8212; were injured. But only Haerter and Yale, still firing their weapons when the truck exploded, were killed.

Afterward, thoughts about the two were never far from their friends&#8217; minds, and it affected both units. Yale&#8217;s unit left the post that day, ahead of schedule.

Haerter&#8217;s unit was there to stay. "It was like a sucker punch. It was hard to deal with it," Teague said. "We did our intel and concentrated our efforts on finding the guys responsible."

Haerter and Yale were undoubtedly heroes, their fellow Marines say, yet they were also just doing what they had to do. They were Marines. They couldn&#8217;t have run.

"They were doing their job," said Maj. Mike Wilonsky, Haerter&#8217;s battalion commander. "The fact they did their jobs saved the lives of over 50 Iraqis and Marines."

"High expectations, yes, but that&#8217;s what we put them there to do," said Capt. Matthew Martin, Yale&#8217;s company commander. "They were ready to face the challenge they faced that day. And under the worst possible circumstances, they did the unimaginable. They did everything we could have hoped they would have done."