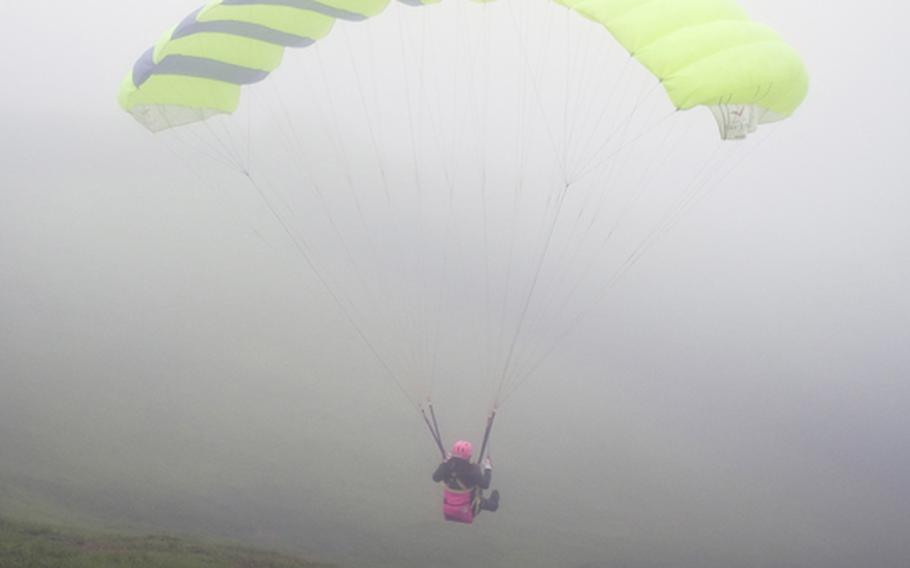 Buy Photo
My friend Kanako Kobayashi first flight is a success as she glides down on her first paragliding experience in Izu this past August. (Grant Okubo/Stars and Stripes)

Buy Photo
My friend Kanako Kobayashi first flight is a success as she glides down on her first paragliding experience in Izu this past August. (Grant Okubo/Stars and Stripes) 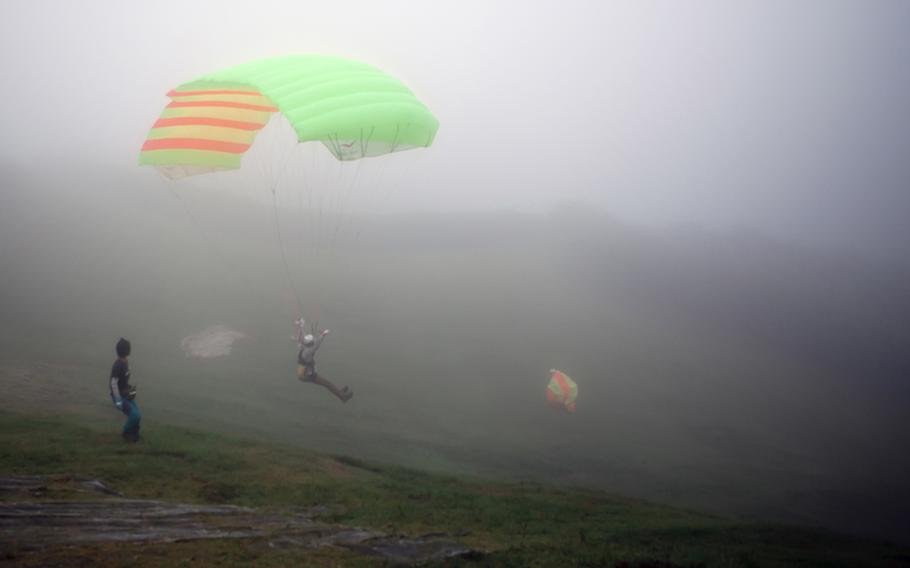 Buy Photo
Fog-filled skies were just some of the minor obstacles faced during a recent paragliding trip to Izu this past August. (Grant Okubo/Stars and Stripes) 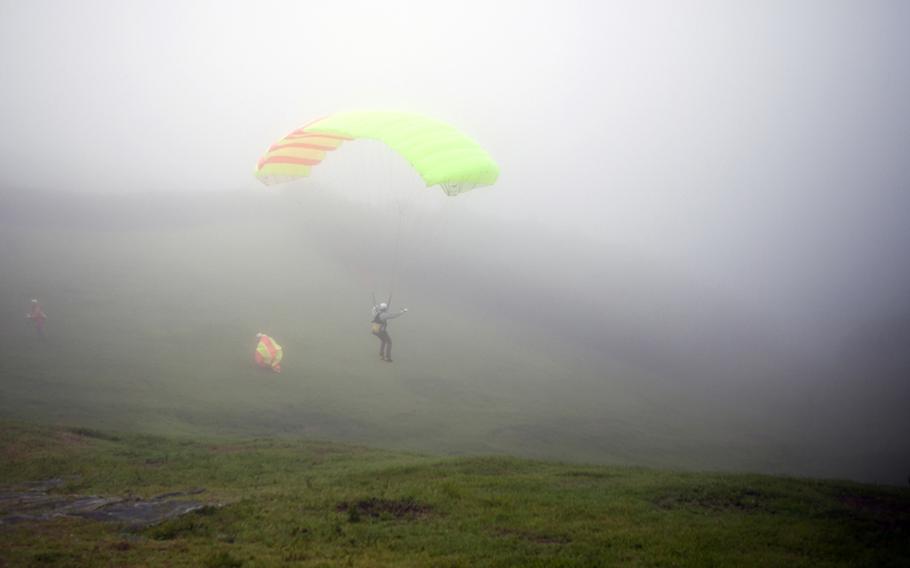 Buy Photo
Fog-filled skies were just some of the minor obstacles faced during a recent paragliding trip to Izu this past August. (Grant Okubo/Stars and Stripes)

Whenever I seek a new adventure here in Japan, I normally just go in the direction the wind takes me.

Recently the winds swept me to Atami in the eastern Izu Peninsula for my first paragliding experience.

I wasn&rsquo;t sure what to expect. I&rsquo;d gone skydiving before and foolishly thought that might be helpful. To my surprise, it wasn&rsquo;t. Paragliding is a completely different experience. And it didn&rsquo;t help that my instructor only spoke Japanese. Having not yet mastered the language, I was fortunate to have with me a friend who was a native speaker to help translate.

During the pre-flight instruction, I was taught basic positions I would need to know. I knew a few of the Japanese terms, but I needed to quickly memorize others so I could understand the orders the instructor would bark out when I was taking flight. Once the instruction was over, our small class picked up our paragliding wings, harness and helmet and walked towards the paragliding course.

Our instructor repeated the demonstration of how to set up our gear, also shown to us earlier in video.

It was fairly misty morning with a fair amount of gust. The hill we were to glide down was sloped at about a 45-degree angle and was a little more than 100-meters long. It was a relatively small and basic course.

I was confident that I would get the best of that hill.

After watching my friends go first so I could take photos of them, I was ready to take the big leap. My first flight was truly epic &mdash; epochally bad that is. It sort of played out like a scene from a Warner Bros. &ldquo;Looney Tunes&rdquo; cartoon where the old Wiley Coyote runs off the cliff only to realize he&rsquo;s standing on air and laws of physics immediately follow.

Because of my relatively poor Japanese language skills, I misunderstood one of the of the directions delivered by the instructor with a megaphone at the bottom of the hill.

As each person readied to glide down the hill, the instructor rattled off step-by-step instructions, each command helping keep you on track during the flight. It&rsquo;s pretty simple, unless you can&rsquo;t speak the language. While I did memorize the terms, it didn&rsquo;t occur to me on that first jump how difficult it would be to focus on the physical activity and translate the meaning of the commands at the same time. I was quickly confused and panicked. Awkwardly I took flight, for about two seconds. Before I knew it, I was tumbling helplessly down the hill.

That&rsquo;s what you get for not following directions.

Although the only thing I bruised was my ego, I really didn&rsquo;t want to give it another shot. But once everyone made their way up the hill again, the instructor lined up my wings for a second attempt. After taking time to think about what I was doing and talking with my friend about each step I needed to take, I decided to give it another try. The downhill instructor even used some English words to help me out.

With my confidence built back up, I started running. I had lift off and felt like I could soar with the birds. I even understood what the instructor was telling me. It was a wonderful feeling as I flew effortlessly down the hill.

I guess you could say I was a natural.

As I landed lightly on my feet, I turned back to gaze at what I had just conquered. And then it hit me: I had to lug all the paragliding gear back up the unpaved hill. It was quite the workout.

Even though I was tuckered out, I managed to take four more amazing flights before the session was cut a bit short due to worsening weather.

While a bit bumpy at first, paragliding was an adventure. Since the bad weather cut short our lessons, my friends and I were invited back to try paragliding again for half a day to finish up our initial lesson, so this November we&rsquo;ll be taking to the skies once again. Hopefully I&rsquo;ll remember everything I learned from my first experience. If not then I&rsquo;m sure I&rsquo;ll have plenty of material for a follow-up story.