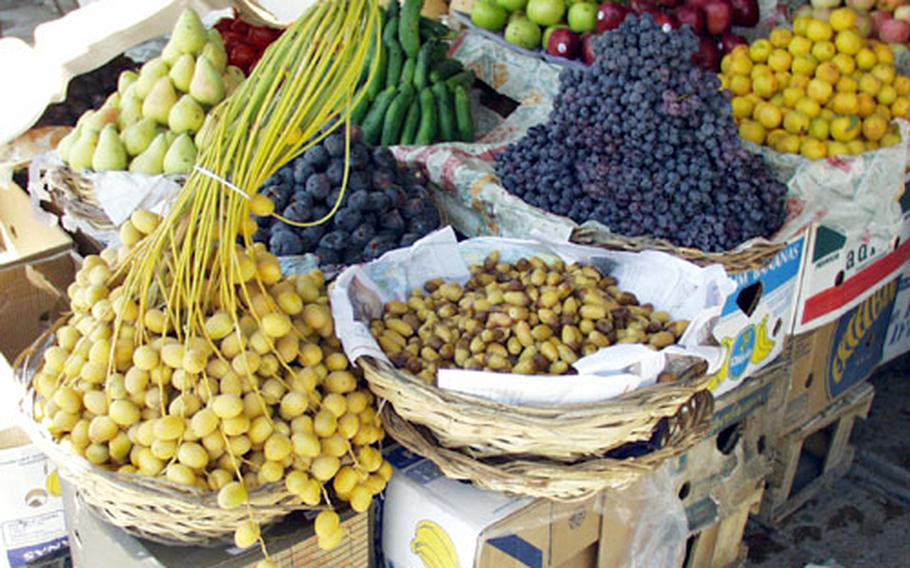 Dates, shown in Jassim Al-Shammery’s stand, in the Christian sector of southeast Baghdad, are one of Iraq’s most famous food products. Iraqis eat dates in two ways: austa umram, or half ripe and half over-ripe (some people might even say rotten); or barhi, which is simply ripe. (Lisa Burgess / S&S)

Dates, shown in Jassim Al-Shammery’s stand, in the Christian sector of southeast Baghdad, are one of Iraq’s most famous food products. Iraqis eat dates in two ways: austa umram, or half ripe and half over-ripe (some people might even say rotten); or barhi, which is simply ripe. (Lisa Burgess / S&S) 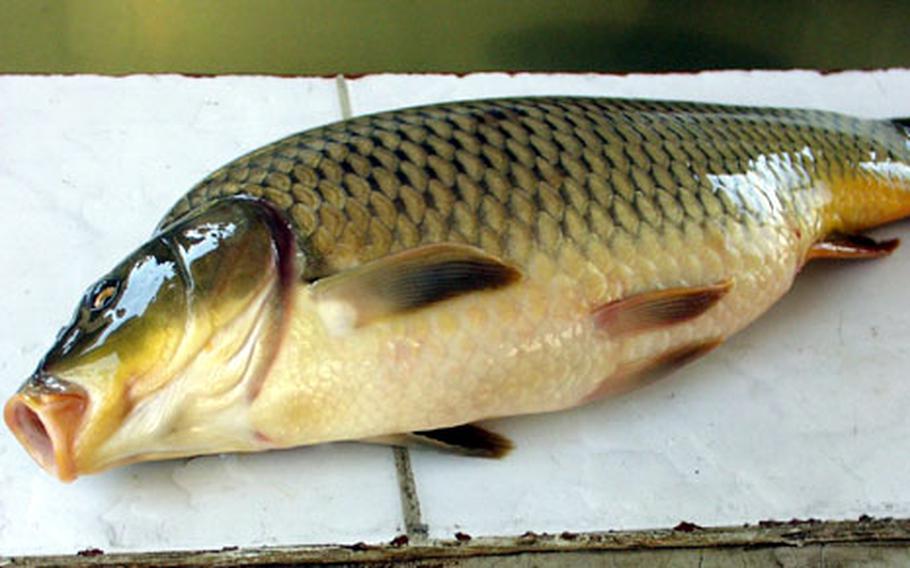 Iraq’s most well-known national dish is massgouf, a fish that is caught in the Tigris River, split, gutted, salted and roasted for nearly an hour near a charcoal fire. (Lisa Burgess / S&S)

Times are still rocky in Iraq, but to Baghdad residents, the sweet, smoky smell of barbecued fish that began to linger along the Tigris in mid-August is one small sign that life is beginning to return to normal.

The scent is massgouf, a fish that is Iraq&#8217;s national dish. Dark, plump and unlovely in life, its flesh is sweet, tender and memorably delicious when roasted by a charcoal fire.

The Tigris River is loaded with massgouf, which range in size from about two pounds to up to seven pounds. Customers choose their own live fish from a tank; the cost is calculated by weight.

Once you choose a fish, the vendor splits it down the middle, removes the guts, adds some spices, then opens the fish like a book and impales it on a stick.

Traditions vary on how to spice the massgouf before roasting it. Other regions use curries, dried peppers, garlic and other herbs and spices to add flavor to the fish. But in Baghdad, nothing but salt is used.

Meanwhile, upon a flat concrete or stone platform, fragrant wood has been piled into a small mound, and set alight.

The staked fish is placed near the flame, with the flesh exposed to the hottest part of the fire &#8212; but not so close that the fire can reach the fish.

The roasting takes nearly an hour, depending on the size of the fish. Customers either take the cooked fish home to their families, or eat it at the restaurant, with a little salad served on the side.

Massgouf has a dense, white flesh. When barbecued, it is on the dry side, flaky, and has a lovely smoky flavor from the roasting.

When summer comes in Iraq, vendors on street corners begin roasting massgouf for the noon meal, which is the largest meal of the day for most Iraqis.

In Baghdad, the Tigris River is also lined with restaurants that sell nothing but massgouf, which many Iraqis consider the perfect food to top off a long night of partying. Nighttime is, of course, the coolest part of the day, and in Iraq, when temperatures reach almost 140 degrees, many Iraqis think nothing of nibbling their massgouf and drinking until 2 a.m. or later.

For months after the war, the massgouf vendors and restaurants in Baghdad were closed.

Rumors were rampant that the Tigris River was contaminated and the fish would make Iraqis ill, and most patrons were afraid to venture out after dark, anyway.

Finally in mid-August, the citizens of Baghdad began to venture back into the streets during the early evening.

And so, too, did the massgouf makers, to ply their trade.

Now, from one end of the city to the other, the fragrance of charcoal fires permeates the air.

The large fish swim in lazy circles in their stone or concrete tanks near every food market. Leaning against the tank are nets, and a chopping block, slick with chum and blood, sits at the ready, so the vendor can gut your choice on the spot.

And on the Tigris River, as the sun goes down the owners&#8217; massgouf restaurants on Abu Nawass street, they are once again using hoses to rinse the concrete patios of their outdoor eating areas. They check the bright strings of lights that illuminate the diners, and wipe clean the white plastic tables and chairs.

Massgouf isn&#8217;t the only summer delicacy in Iraq.

Dates are also one of Iraq&#8217;s most famous food products, and August is the season that the fruits begin to ripen. The season runs through November.

Throughout the world, but especially in the Middle East, dates have a special meaning to Muslims, because the fruit is mentioned in the Quran.

&#8220;The Holy Prophet Mohammed, blessed be his name, said his favorite food was dates and yogurt,&#8221; according to Faris Mohammed, an Iraqi who works as a translator in Baghdad.

&#8220;In Saddam&#8217;s time, when an official came to one of his palaces, he would be met at the entrance with a very large tray of dates and a glass of lassi,&#8221; a yogurt drink that Iraqis believe to be very cooling and healthy, Mohammed said.

Religious significance aside, Iraqis believe that eating dates is good for their health, because the fruit is &#8220;a complete food &#8212; they have glucose for energy, vitamins, everything,&#8221; Mohammed said.

Middle Easterners also regard dates as an aphrodisiac.

Most Americans have never seen a fresh date, much less eaten one. Dates do not ship well, so they are typically dried before export.

Americans are missing quite a treat.

There are at least 540 different varieties of dates produced throughout the Middle East, said Jassim Al-Shammery, a grocer in the Christian sector of southeast Baghdad. His shop offers several varieties of dates.

Fresh dates are yellow in color and range from slightly crunchy when the season first begins to soft, like a peach. Most dates are about the size of a small kumquat or a grape tomato, but some varieties of dates are so large that they are longer than a man&#8217;s thumb, with five or six pieces making up a single kilo, Al-Shammery said.

The flavor also varies, from almost mangolike to so sweet &#8220;you can barely stand to eat two or three of them,&#8221; Mohammed said.

Iraqis eat dates in two ways: barhi, which is Arabic for ripe; or austa umram, or half ripe/half overripe (some people might even say rotten, but it&#8217;s more like very sticky or semi-dried).

And while most of the fruits may taste the same to laymen, connoisseurs say they can tell the difference between dates not only from different orchards, but even from two different trees right next to one another.

A kilo of fresh dates bought in a Baghdad marketplace costs anywhere from about 50 cents to $1, for very rare and special varieties.

Iraqis do eat dried dates when the fresh varieties are out of season, but they can be costly. The most expensive dried dates in Iraq are from Abbu Sayyaf Sweets, Baghdad&#8217;s best known and most exclusive pastry shop. There, a kilo currently costs $14.