Indonesia: Visit the Monkey Forest at your own risk 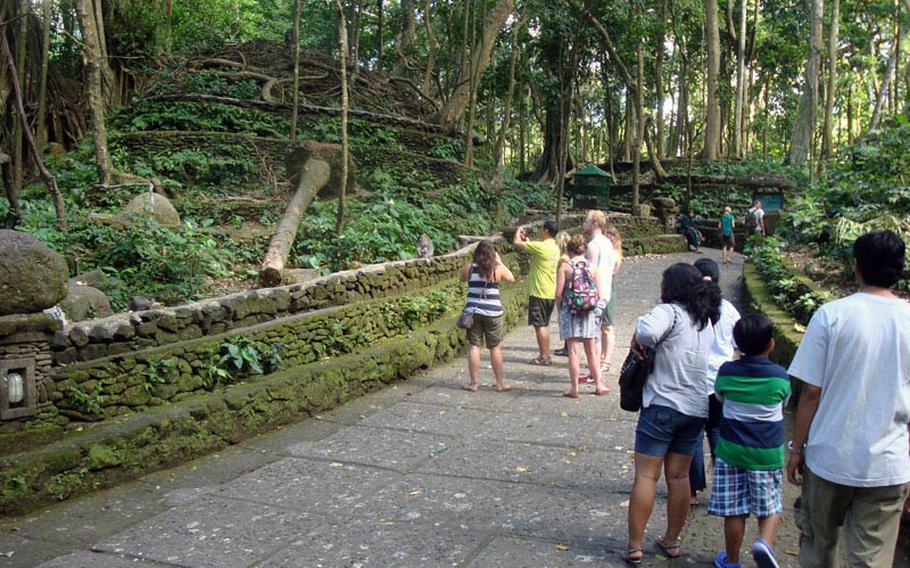 Buy Photo
Visitors stroll through the Monkey Forest in Ubud, a town on the Indonesian island of Bali, where monkeys roam free and interact with tourists - sometimes in hostile ways. (Ashley Rowland/Stars and Stripes)

Buy Photo
Visitors stroll through the Monkey Forest in Ubud, a town on the Indonesian island of Bali, where monkeys roam free and interact with tourists - sometimes in hostile ways. (Ashley Rowland/Stars and Stripes) 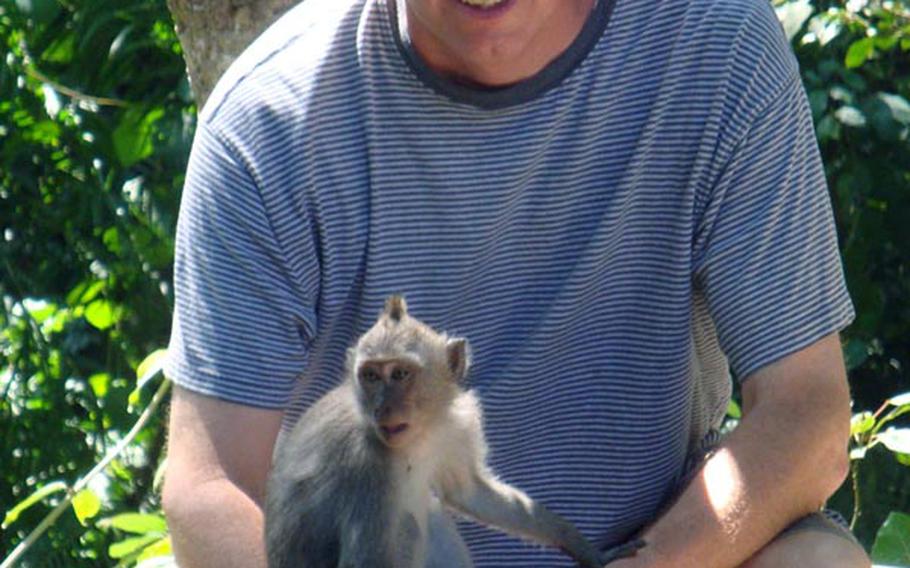 Buy Photo
A monkey rests on the arms of Stars and Stripes reporter Jon Rabiroff during his July visit to the Monkey Forest in Ubud, a town on the Indonesian island of Bali. The brief interaction went well, but Rabiroff was not as lucky during a later encounter with another monkey. (Ashley Rowland/Stars and Stripes) 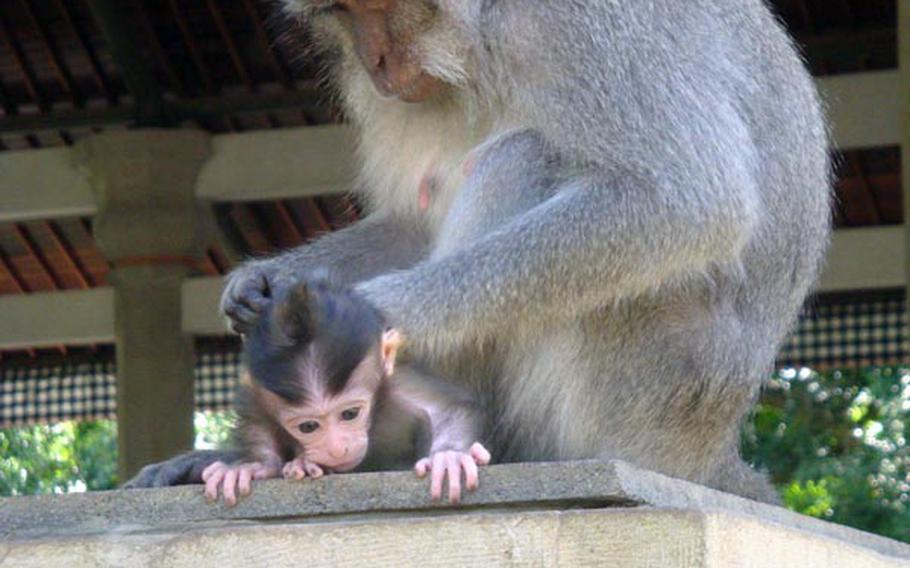 Buy Photo
An adult monkey tends to a baby at the Monkey Forest in Ubud, on the Indonesian island of Bali. Stars and Stripes reporter Jon Rabiroff believes it was this monkey who later bit him as Rabiroff made friends with a few baby monkeys. (Ashley Rowland/Stars and Stripes) 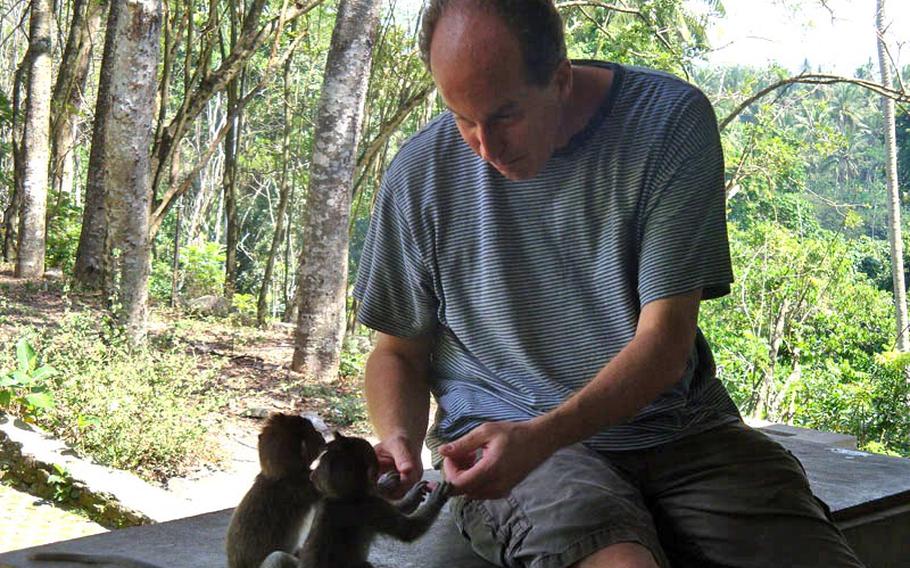 Buy Photo
Two young monkeys grab the fingers of Stars and Stripes reporter Jon Rabiroff during his July visit to the Monkey Forest in Ubud, a town on the Indonesian island of Bali. Seconds after this photo was taken, an adult monkey - presumably upset about the interaction - bolted at and bit the Rabiroff&#39;s arm, drawing blood. (Ashley Rowland/Stars and Stripes) 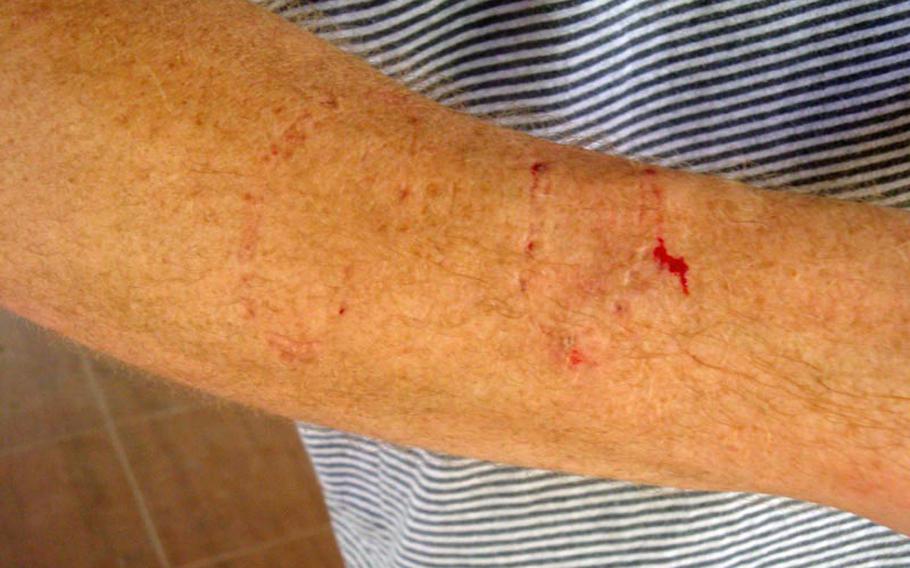 Buy Photo
Blood and two sets of teeth marks are visible on the arm of Stars and Stripes reporter Jon Rabiroff after his encounter with an angry monkey in the Monkey Forest in Ubud on the Indonesian island of Bali. (Ashley Rowland/Stars and Stripes) 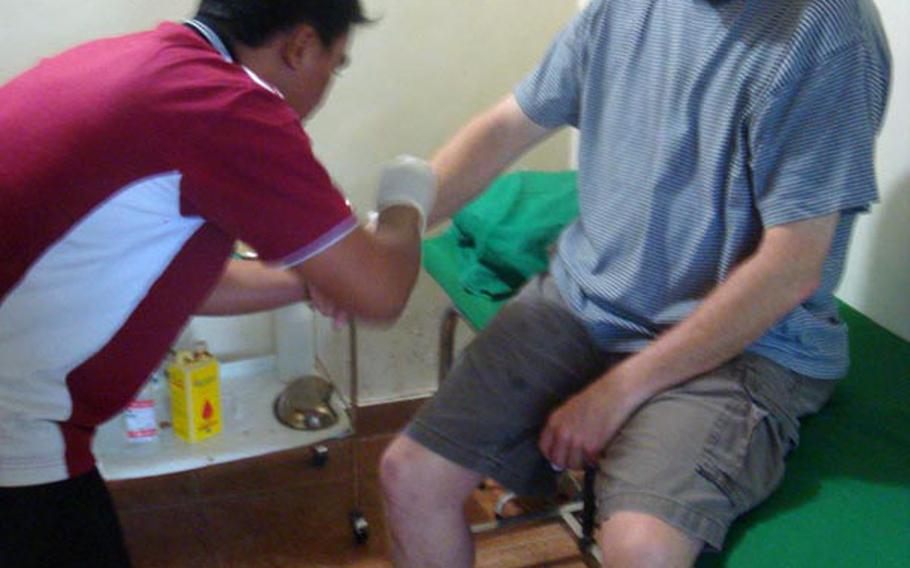 Buy Photo
Stars and Stripes reporter Jon Rabiroff is treated at the first aid station at the Monkey Forest in Ubud on the Indonesian Island of Bali after being bitten by a monkey there in July. Rabiroff thought the incident was amusing until he started getting information about the potential monkeys have for passing on rabies. (Ashley Rowland/Stars and Stripes) 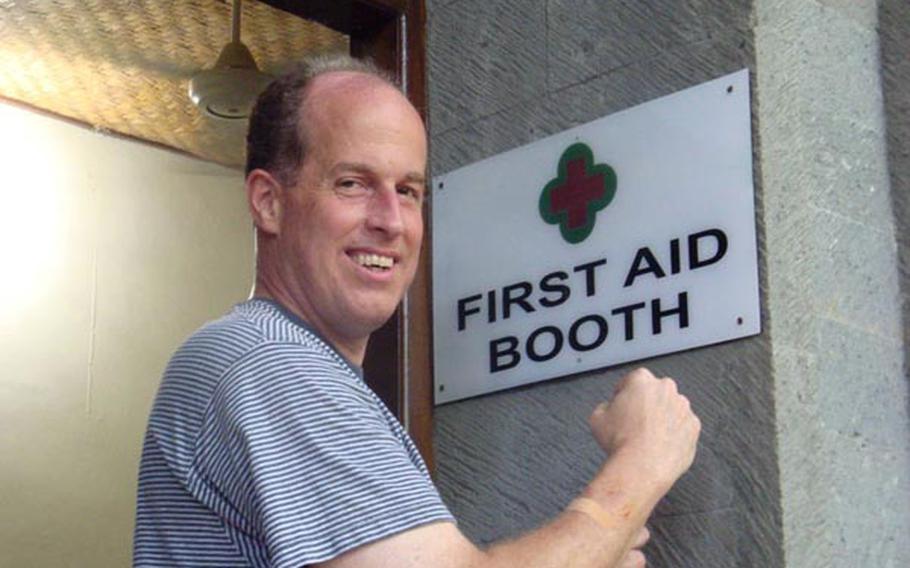 Buy Photo
Stars and Stripes reporter Jon Rabiroff shows off his arm after it was cleaned and bandaged after he was attacked and bitten by an angry monkey at the Monkey Forest in Ubud on the Indonesian island of Bali in July. Despite assurances from an official at the park that the monkeys there were rabies-free, Rabiroff spent days worrying whether he should have sought more advanced treatment for his injury. (Ashley Rowland/Stars and Stripes) 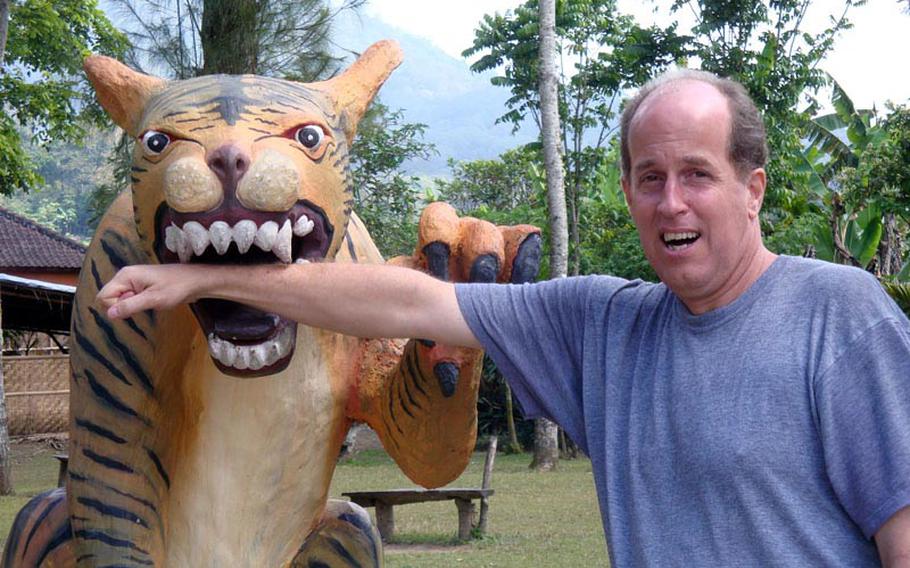 Buy Photo
Stars and Stripes reporter Jon Rabiroff pretends to brace for the bite from a tiger statue during a July vacation on the Indonesian island of Bali. He did so in making light of an earlier attack from a monkey, who bit Rabiroff in the arm and prompted him to go back and forth about whether to seek extensive treatment in connection with the incident, or shrug it off as just another vacation mishap. (Ashley Rowland/Stars and Stripes)

Call it a great vacation with an asterisk.

The place was interesting, the people were nice and the food was good.

But, I may have contracted a deadly disease that could take up to two years to show itself, so a return trip to Bali may not be in the cards.

That&rsquo;s what I get for messing &mdash; or should I say monkeying &mdash; around while on holiday.

The experience I am about to relate gave me great insight not only into my feelings about death, but on where to draw the line between common sense and caution.

It also gave me &mdash; excuse the expression &mdash; a killer vacation story, far more interesting than the usual stuff you come home with about fascinating museums, customs or hole-in-the-wall restaurants.

Looking back, there were plenty of warning signs that our recent visit to the Monkey Forest in Ubud was going to be more memorable than your standard vacation outing.

The popular tourist destination is no zoo. Instead, visitors stroll around a park as dozens &mdash; perhaps hundreds &mdash; of monkeys mingle with them, tending to their daily monkey business. There isn&rsquo;t even anything keeping the monkeys in the park other than the daily feedings. They roam the street in front of the park&rsquo;s entrance, and can be seen frolicking on the roofs of nearby buildings.

At first, our visit was a highlight-in-the-making. The monkeys let people walk right up to them and snap photos. One wandered up and sat in my lap like a devoted puppy. Everyone seemed to be having a good time &mdash; people and monkeys alike.

Then things started to change.

It reminded me of a scene in the 1997 movie &ldquo;The Lost World: Jurassic Park,&rdquo; in which Jeff Goldblum&rsquo;s character mocks tourists admiring the dinosaurs by saying, &ldquo;Oh, yeah. &lsquo;Oooh.Ahhh.&rsquo; That&rsquo;s how it always starts. Then later, there&rsquo;s running and screaming.&rdquo;

No, the monkeys did not all of a sudden turn on their visitors, like the birds in, well, &ldquo;The Birds.&rdquo; But, I gradually started to notice that this was a tourist attraction badly in need of additional staffing.

To the right, a monkey jumped on a woman&rsquo;s back and ripped off the shiny ponytail-holder she was wearing. To the left, another monkey knocked the camera out of a guy&rsquo;s hands and then ran off with a battery that popped out. And, straight ahead, a third evil-looking monkey was playing happily with the broken remains of a pair of sunglasses he had forcibly removed from the face of an unsuspecting guest.

In part because of all the commotion, my girlfriend and I wandered to another part of the park to take some photos and relax for a bit. I sat down and before long three young monkeys wandered up and tentatively tried to make friends with me.

It was a touching moment, as they grabbed my fingers and looked up at me with their big eyes expressing surprise, trust and friendship.

Apparently, not everyone thought our interaction was so heartwarming.

Suddenly, out of the corner of my eye, I saw what I assumed was a mama monkey bolting toward me. I raised my arm to defend myself and the monkey grabbed it and bit down hard &mdash; twice &mdash; at one point looking aggressively into my eyes before I managed to shake myself free, and my attacker wandered off.

At first, the encounter seemed funny. After all, vacation injuries have become the norm since I moved to South Korea two years ago to work as a reporter for Stars and Stripes, and started traveling around the Pacific on vacations with my girlfriend.

She sprained her ankle walking on The Great Wall of China. I did something nasty to my shoulder swinging Tarzan-like on a rope from a tree and dropping into a waterfall in Laos. So, being bitten by a monkey was no big deal, even though blood was trickling from a couple of the teeth marks on my arm.

Or so I thought.

At my girlfriend&rsquo;s insistence, I stopped at the attraction&rsquo;s clean but somewhat rudimentary first-aid station on the way out. There, I had my arm cleaned and bandaged by a unconcerned staffer who assured us that the Monkey Forest had &ldquo;a certificate&rdquo; saying the animals there were rabies-free.

A peek through the clinic&rsquo;s logbook appeared to suggest that several visitors a day were the victims of monkey attacks of one form or another.

I have always been one of those rub-some-dirt-on-it, get-up-nothing&rsquo;s-broken kind of guys, but that did not keep me from bumping around the Web later that day to see if I should be more concerned about my monkey bite experience.

Turns out, there were numerous news stories, medical sites and message-board posts devoted to Monkey Forest encounters gone bad, and a wide range of opinions about the risks involved and the proper course of action to take after the fact.

On one hand, my research found, rabies has been an ongoing concern related to the many stray dogs that roam free around Bali. And, monkeys can get easily get rabies if they end up on the wrong end of a fight with such a dog. The kicker &mdash; if you get rabies, you are almost certain to die a very painful death.

For that reason, there was account after account about the extraordinary steps some people took &mdash; some after only getting scratched by Monkey Forest monkeys &mdash; to get immediate treatment, followed by a series of shots to fend off the potential onset of rabies. Some canceled the rest of their vacations and flew immediately to other countries in search of what they believed to be more-reliable treatment.

Still other sites, sources and message-board posters suggested there was no reason to panic. Yes, getting the shots was probably a good idea out of an overabundance of caution, but health officials had not put out any monkey-related rabies warnings in Bali, and the odds of contracting the disease were relatively remote.

Then there was another expert &mdash; OK, it was actually a taxi driver &mdash; we asked whether the monkeys there had rabies, who not-so-reassuringly said, &ldquo;Not all of them.&rdquo;

I went through a couple of days of flip-flopping from being overly concerned that I was soon going to die if I didn&rsquo;t seek immediate treatment, to scoffing at the very idea of going through the time, expense, pain and inconvenience that would be required to cover myself in the event of such an unlikelihood.

In the end, I decided to roll the dice and hope my simian assailant was disease-free. According to my research, rabies symptoms usually show themselves in two to 12 weeks. At this writing, I am halfway home, and the only time I foam at the mouth is after drinking that first sip of draft beer.

Of course, experts say rabies can take as long as two years to emerge, so my friends and family are on the lookout for any special interest I start to take in eating bananas, climbing trees or singing songs like &ldquo;Last Train to Clarksville&rdquo; or &ldquo;Daydream Believer.&rdquo;