In Japan, it pays to explore your car-care options 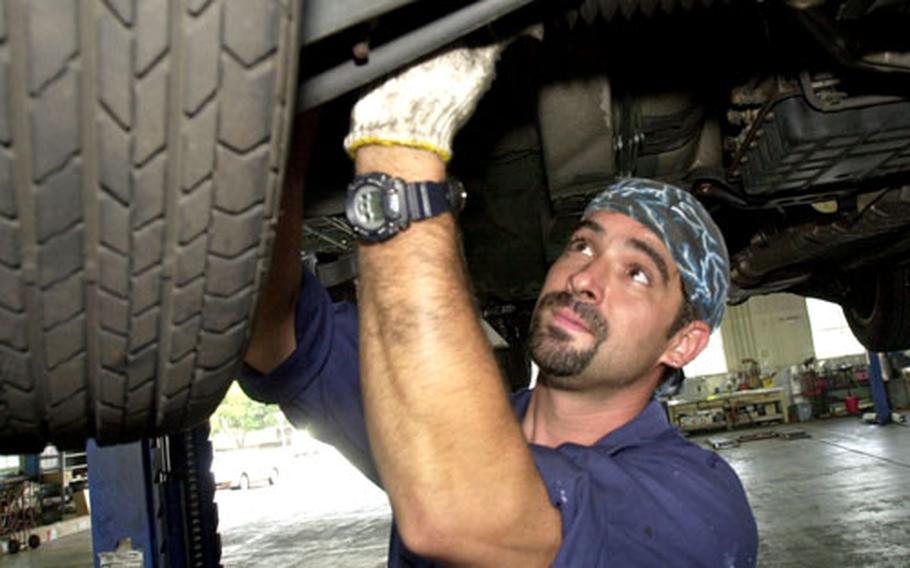 Servicemembers, Defense Department civilians and dependents living in Japan and Okinawa have a wide range of options when it comes to vehicle care &#8212; and staying on base isn&#8217;t necessarily the cheapest choice.

However, while Air Force skills centers feature mechanics employed by the Services division who can charge for vehicle work, the Navy and Army don&#8217;t allow the practice. Instead, they offer bay and tool rentals for do-it-yourselfers.

&#8220;You can go off base, and just like in the States when you want a special part, you can go to an auto parts store and get a good deal,&#8221; said Maj. Eric Hilliard, a 5th Air Force spokesman. &#8220;Then you can go to the auto hobby shop and install the part yourself or have one of the specialists work on your car for you. &#8230; Depending on your need, sometimes off-base car care is more affordable.&#8221;

AAFES centers on Yokota, Kadena and Misawa air bases are convenient, he said, but people can occasionally get a better deal by going outside the gates.

Zama&#8217;s Auto Crafts Shop functions on a self-help basis. Spaces may be rented, and professionals there can provide tools and dispense advice.

At Yokosuka Naval Base, &#8220;we have a full-service NEX Autoport, and an MWR Auto Hobby Shop equipped with a wide variety of tools and several service bays for do-it-yourselfers,&#8221; said Mike Chase, a spokesman for Commander, Fleet Activities Yokosuka. &#8220;There are also quite reasonable off-base dealerships and service stations, but they are generally not patronized by large numbers of base personnel due to the good prices available on base and the language barrier.&#8221;

Marine Corps Community Services&#8217; Typhoon Motors Automotive Services centers handle the majority of car care at Iwakuni and III Marine Expeditionary Force bases on Okinawa. Qualified mechanics specialize in major and minor repairs on all makes of vehicles, and the facilities also provide places for patrons to work on their own cars in a separate section.

Ashleigh Pipes, an Iwakuni MCCS spokeswoman, says the benefits of Typhoon Motors services are lower prices and accessibility to familiar products from the United States. The on- premises auto skills center offers labor cost-savings, space to wash vehicles and overnight parking for people working on their own rides.

Military customers may find direct parts availability at off-base shops, she added, but prices are generally higher and most dealers don&#8217;t speak English very well. Iwakuni&#8217;s Marine Corps Exchange Service, the branch&#8217;s only overseas location, is part of MCCS and doesn&#8217;t have a separate car-care alternative.

Capt. Danny Chung, III Marine Expeditionary Force spokesman, said servicemembers can use garages outside the gates but said there was no way to compare price differences between on and off-base establishments.

&#8220;The advantages to using MCCS automotive services are the variety of services offered, the knowledgeable staff and our cooperative dealings with off-base companies to provide servicemembers with complete auto care,&#8221; he said.

You can complain about the price of gas all day long, but if you need your car fixed, you&#8217;d be hard-pressed to object to the prices at the car craft shop on Yongsan Garrison in South Korea.

The craft shop charges $20 an hour, plus the costs of parts, to diagnose and fix problems with American- and foreign-made cars. Or, customers can work on the cars themselves, and the staff at Yongsan&#8217;s shop will assist and teach, for free, says Arthur Savannah, the shop&#8217;s manager.

&#8220;We can assist or do it for you,&#8221; said Savannah, who took over as manager early this year. Before that, he was the manager of the AAFES car care center on Camp Kim in Seoul.

At the AAFES facilities, the staff can do simple work: oil changes, tire rotation, inspections. But at the do-it-yourself craft shops, customers have access to diagnostic testing for nearly every car make and problem, excluding transmissions, Savannah said. They can even do detailing and body work, he said.

The craft shops &#8212; there are ones at Camp Walker, Osan Air Base and Camp Humpreys &#8212; also charge a $2-an-hour fee if you occupy one of the bays. At Yongsan, there are four bays. The staff will help clean up after you.

If your car needs a part for a Korean-made car, the shop can help you find a dealer. For American, European or Japanese cars, customers typically order themselves, then bring in the part for replacement, he said.

When a car is in serious trouble &#8212; like needing a new transmission or rebuilt engine&#8212; Savannah has a list of Korean car centers he can recommend. Those mechanics work on all makes of cars, he said.