How to enjoy the Shanghai World Expo 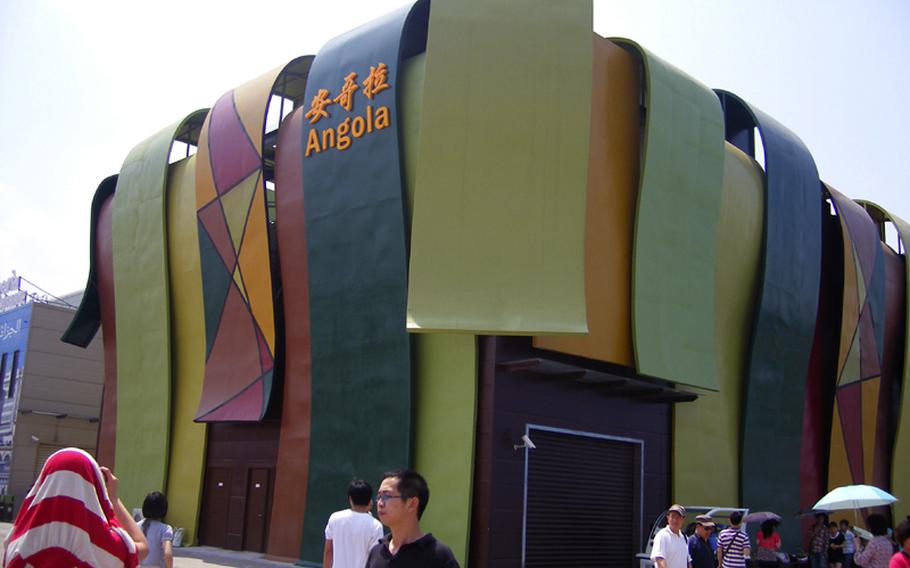 Buy Photo
The Angola pavilion at the Shanghai Expo. (Karen Willenbrecht/Stars and Stripes)

Buy Photo
The Angola pavilion at the Shanghai Expo. (Karen Willenbrecht/Stars and Stripes) 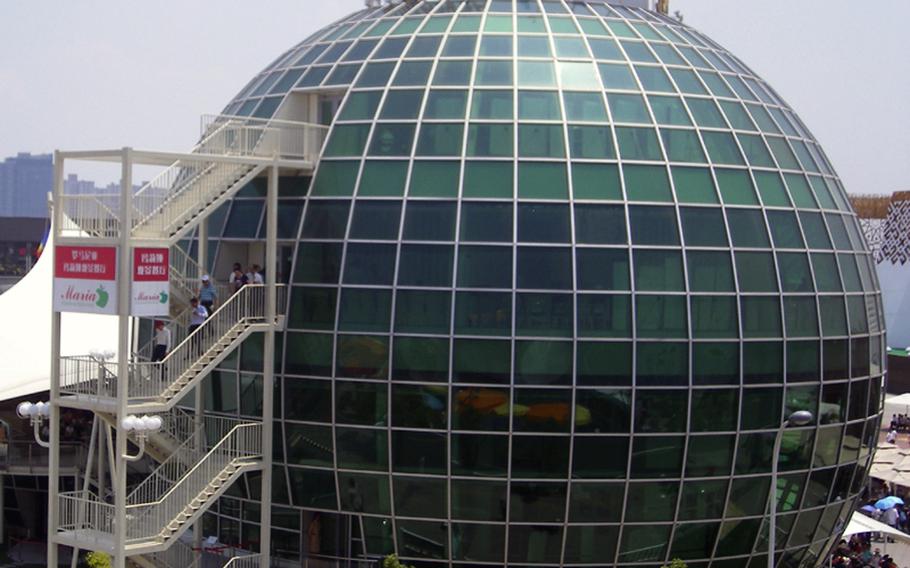 Buy Photo
The Romania pavilion at the Shanghai Expo. (Karen Willenbrecht/Stars and Stripes) Buy Photo
The author found her unexpected moment of Zen on this ride, in a tiny amusement park tucked into People's Square. (Karen Willenbrecht/Stars and Stripes) Buy Photo
Communist Cuba had the most blatantly capitalist pavilion at the Shanghai Expo. The short entry line made it a nice place to escape the heat and enjoy a rum drink. (Karen Willenbrecht/Stars and Stripes) Buy Photo
Denmark brought the Little Mermaid statue, which normally sits on a rock in Copenhagen harbor, to its pavilion at the Shanghai Expo. (Karen Willenbrecht/Stars and Stripes) 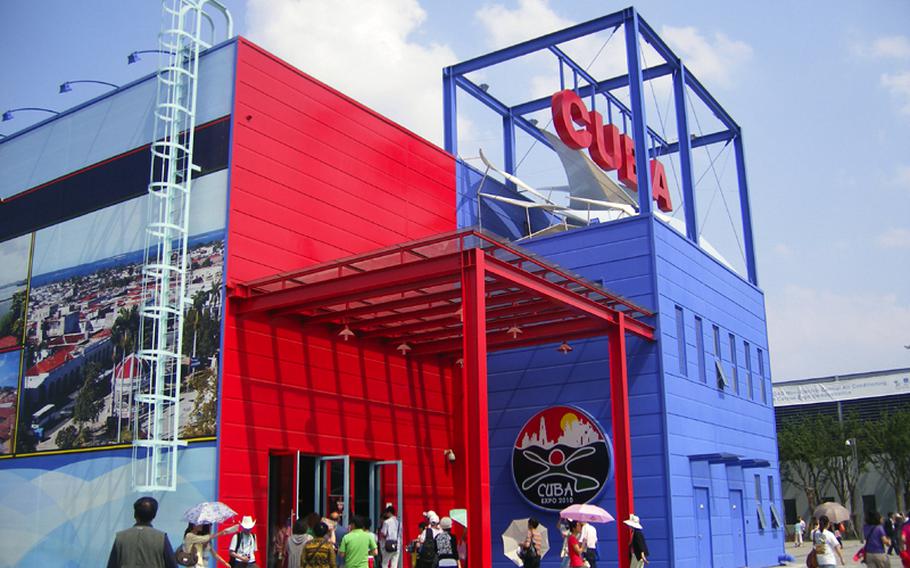 Buy Photo
The Cuba pavilion at the Shanghai Expo. (Karen Willenbrecht/Stars and Stripes) Buy Photo
The Denmark pavilion, where you can walk or ride a bike up the spiral ramp. (Karen Willenbrecht/Stars and Stripes) 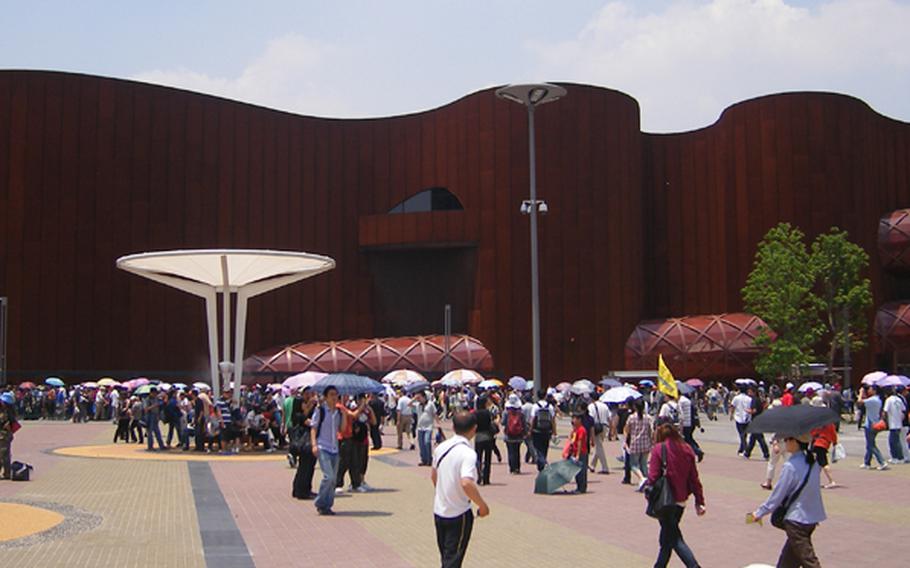 Buy Photo
The Australia pavilion at the Shanghai Expo. (Karen Willenbrecht/Stars and Stripes) Buy Photo
The Thailand pavilion at the Shanghai Expo. (Karen Willenbrecht/Stars and Stripes) When it comes to travel planning, I&rsquo;m of two minds. I plan the logistics &mdash; plane tickets, hotel room, transportation from the airport &mdash; down to the last detail. But once I&rsquo;ve checked into the hotel, my favorite plan is no plan at all. My best travel memories don&rsquo;t involve guided tours or guidebook itineraries; they&rsquo;re all about unexpected delights, like stumbling on a great little cafe.

I discovered the downside of poorly planned travel when I went to Expo 2010, the world&rsquo;s fair being held through Oct. 31 in Shanghai. After seeing an ad for the expo, I skimmed one article about it, coughed up a $30 rush fee to hastily secure a visa, booked a hotel that was near the subway and headed for China.

My slapdash spontaneity was no match for the expo, a sprawling, massive undertaking that requires the precision of a military campaign to conquer. I had no plan and no idea what to expect. I vaguely pictured a larger version of the &ldquo;Taste of&rdquo; festivals every city holds. What I found was more like a larger version of a fourth-grade geography fair, where each student is told to make a booth with facts about their assigned country and its environmental efforts. Some kids (Sweden) spend weeks on elaborate displays that rigidly hew to the theme; others (Holland) print out a list of facts from the tourism board the night before; and some just write the country name in glitter glue on poster board. (Cuba&rsquo;s pavilion consists entirely of a bar selling Havana Club rum drinks.)

Because I was so clueless about how the expo would actually look, I made a lot of mistakes in preparing for my trip. But, hey, I make mistakes so that you don&rsquo;t have to. Here are my lessons learned:

Buy your tickets in advance. Ticket lines at the expo gates are long and a long walk from the entrances. Authorized ticket sellers can be found here: http://en.expo2010.cn/a/20090327/000001.htm

Research the pavilions. I assumed that along with my admission ticket, I&rsquo;d be given a glossy, multilingual brochure with a description of what each pavilion had to offer. What I got instead was a pictorial map in Chinese. Unless you&rsquo;re planning on spending the rest of the summer at the expo, you&rsquo;ll want to decide in advance which ones are worth your time. The expo&rsquo;s website has a page listing the highlights of each pavilion: http://en.expo2010.cn/pavilions/hqzg.htm

Make a plan. Deprived of my imaginary brochure, I opted instead to just wander around for a while and see what looked interesting. While I enjoyed seeing the huge variety of pavilion architectural styles and decor, I quickly realized this approach was time-consuming and exhausting. The expo site covers more than five square kilometers, so you&rsquo;ll need a strategy. My advice: rank the pavilions in tiers of &ldquo;must see&rdquo; and &ldquo;would be nice to see,&rdquo; then map out a route. Allot at least 90 minutes per pavilion, and group them by zones &mdash; the site is so huge that it&rsquo;s not feasible to hopscotch around.

Protect your skin. My everyday sunscreen was about as effective as the Washington Generals&rsquo; defense. I thought I&rsquo;d spend the majority of my time in air-conditioned pavilions, but the reality is, the wait time for most pavilions is at least an hour, and only a small portion of each line is covered by canopies. With limited shade and with temperatures hovering near 100 degrees, it&rsquo;s easy to get dehydrated or sick. Use a high-SPF waterproof sunblock, and take a parasol or umbrella to block the blazing overhead sun. Also, you can&rsquo;t bring in bottled water, so budget for and buy a few bottles a day at the expo.

Be aware that Chinese and Americans have different rules for standing in line. The Chinese regard fellow line-standers the way Danica Patrick regards the other drivers on the racetrack &mdash; as obstacles to maneuver around, by whatever means necessary. Queue-jumping is commonplace; people will simply step in front of you. Don&rsquo;t confront them. Instead, stand close to the people in front of you; physically block potential cutters (an elbow works well); and accept that it&rsquo;s going to happen sometimes.

Don&rsquo;t bring small children. Have I mentioned the long lines? The heat? The fact that most pavilions are multilevel and involve stairs? Toddlers and parents alike would probably be happier with a trip to the park. And speaking of that &hellip;

Don&rsquo;t get too caught up in expo hype. I waited nearly two hours to see the Sweden pavilion because I&rsquo;d heard it was a lot of fun &mdash; there&rsquo;s a big slide! And swings! Then I got inside, and saw the slide was about 15 feet long (and is open only three hours a day). You know where else I can find a slide and 10 swings? The park five minutes from my house. There are once-in-a-lifetime experiences to be had here, but riding a bike (Denmark) at the expo is no different from riding one at home. Seek out novelties; otherwise, you&rsquo;re going to be disappointed.

Don&rsquo;t expect to broaden your culinary horizons. I thought I&rsquo;d flit from booth to booth buying samples of each country&rsquo;s best cuisine. Reality: They&rsquo;re feeding half a million people per day. The dining pavilions feature fast food; some of the national pavilions are a step up, but they&rsquo;re forced to focus on quantity over quality, and most can&rsquo;t be accessed without going through the pavilion entry line.

Consider going at night. After 4 p.m., the entrance fee drops by half, and the sun drops to a spot where it&rsquo;s warming you, not frying you. Plus, a lot of the crowd has already been and gone. One caveat: By this point, some of the lines have reached unmanageable lengths, with wait times at popular pavilions (Japan, China, U.S.) exceeding four hours.

Don&rsquo;t be afraid to cut your losses. Six hours into my first day at the expo, I realized &hellip; the highlight of my day had been taking a nap on the fake grass at Holland. I was exhausted, sunburned, and I dreaded returning the next day.

So I went back to what works for me. I randomly got off the subway at People&rsquo;s Square, found a hop-on hop-off bus tour, and spent Day 2 exploring Shanghai. And as evening approached, I spotted a tiny amusement park, with just seven rides. I bought a ticket for a ride that spun in circles as it swung higher and higher over the square. The next three minutes were pure, spontaneous bliss: the wind blowing through my hair, the thrill of the rapid drops, the camaraderie of screaming along with the Chinese girls riding next to me &mdash; another unexpected delight for my list of best travel memories.