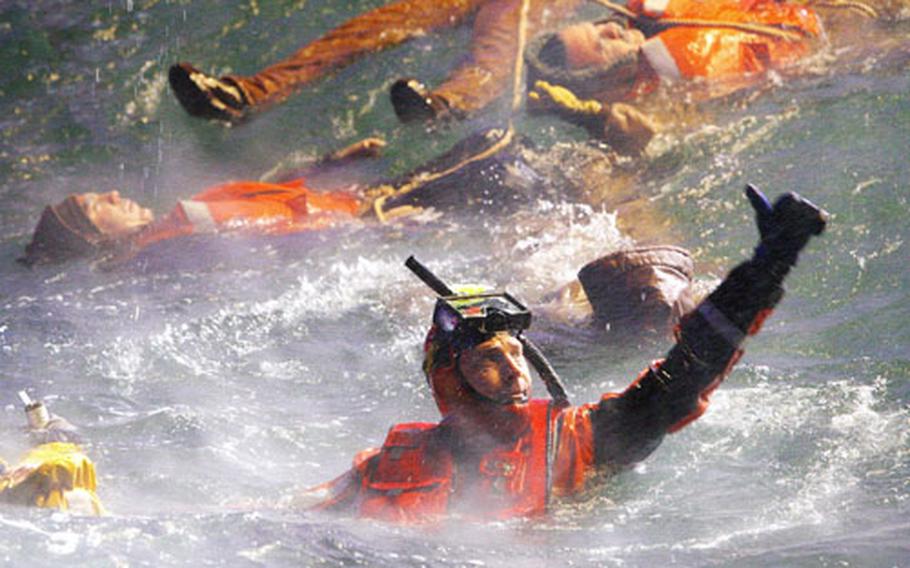 Kevin Costner, in a scene from “The Guardian.” (Touchstone Pictures photo)

The Coasties are ready for their close-up.

Coast Guard rescue crews were featured in a subplot of the 2000 blockbuster &#8220;The Perfect Storm,&#8221; but this film puts the service in the starring role. The plot follows a fictional class of the services&#8217; top swimmers through training and graduation, then out into the ocean.

Guard officials offered filmmakers technical assistance and plenty of access to their facilities to add to the realism of the movie. In addition, director Andrew Davis hired 23 active Coast Guard members to appear in the movie, to make scenes feel more authentic.

Butch Flythe, a retired instructor of the Coast Guard&#8217;s rescue swimmer school and one of Kutcher&#8217;s instructors in the movie, said the crew often checked on equipment, drill protocol, military phrases and hundreds of other little details.

The result, Allen said, is a good look inside the world of the Coast Guard.

Much of the filming took place in Louisiana, and was delayed for several months after crews had to relocate from New Orleans following Hurricane Katrina. At the same time, the real-life Coast Guard rescued and evacuated more than 33,000 people in the city.

Davis and the producers of the film said seeing the heroic work of the Guard during that disaster only re-emphasized the need to accurately capture the service&#8217;s work. Writers even inserted new dialogue into the movie recognizing those efforts, listing it among the many inspirational successes the fictional recruits learn about.

Allen said he hopes the film can help with recruitment &#8212; &#8220;we&#8217;re not having problems, but we hope it would get more people interested in us&#8221; &#8212; but the real benefit of the extra attention will be the morale boost the servicemembers get when they see their story up on the big screen.