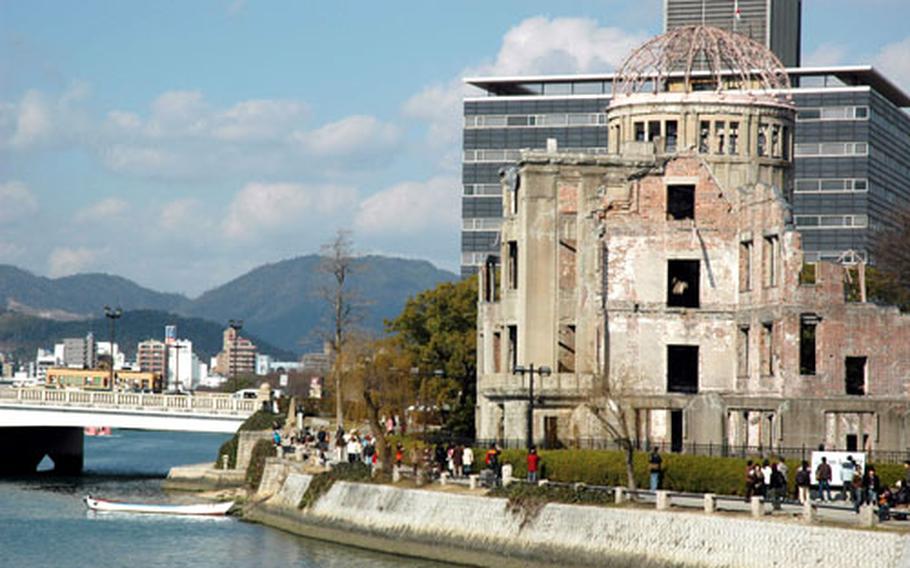 The city&#39;s former Industrial Promotion Hall, now called the A-Bomb Dome, is a relic of the aftermath of the Aug. 6, 1945, nuclear bomb. The building&#39;s skeleton serves to remind visitors of the destruction, but it also gives a glimpse into Hiroshima&#39;s recovery. (Teri Weaver / S&S)

The city&#39;s former Industrial Promotion Hall, now called the A-Bomb Dome, is a relic of the aftermath of the Aug. 6, 1945, nuclear bomb. The building&#39;s skeleton serves to remind visitors of the destruction, but it also gives a glimpse into Hiroshima&#39;s recovery. (Teri Weaver / S&S) The Statue of the A-Bomb Children is a monument to the children who died on the day of the attack, as well as those who died afterward of diseases. The crane, a symbol of happiness and longevity, also is a reminder of a young girl who died a decade after the blast from leukimia. Before she died, she folded more than 1,000 paper cranes in the hopes of a cure. (Teri Weaver / S&S) 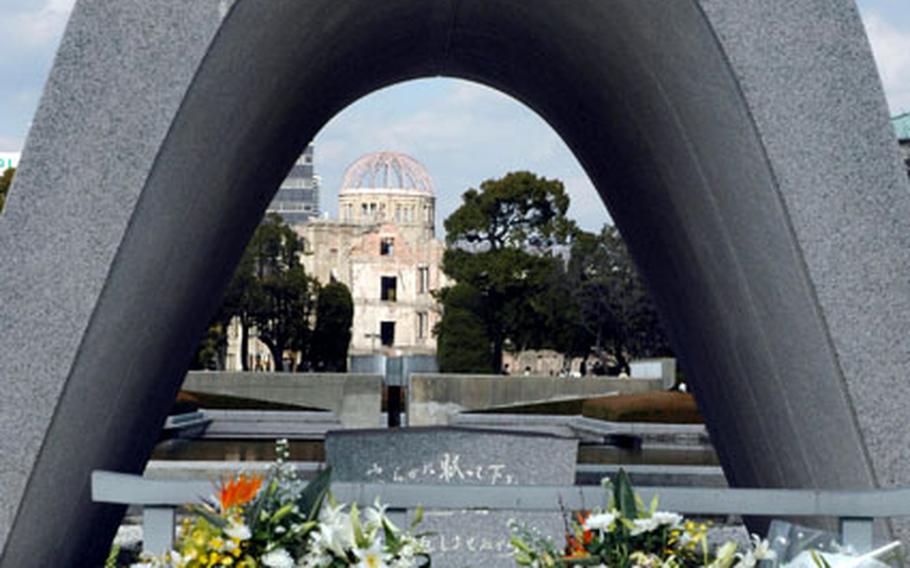 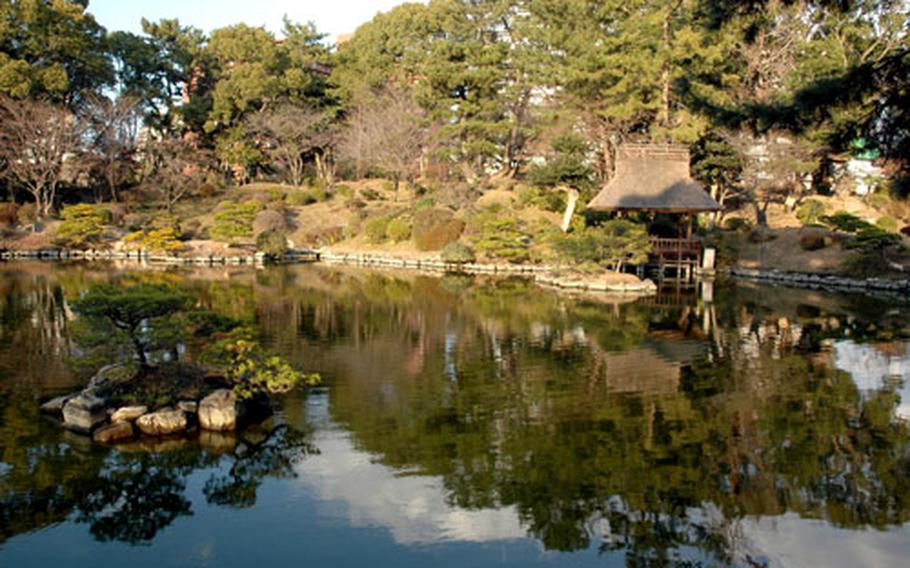 Shukkei-en Garden is a small but carefully planned garden originally built in the late 15th century. Replanted and tended after the atomic bomb explosion, it serves as a respite from Hiroshima&#39;s busy streets. (Teri Weaver / S&S) The cooks at Okonomi Yaki near the city&#39;s Hondori shopping district are assembly line workers dedicated to frying, stuffing and flipping a towering pancake. A seat at the bar allows for a perfect view of the precision at the griddle. (Teri Weaver / S&S)

If you&rsquo;re thinking about spending a day in Hiroshima, my first advice is this: One day won&rsquo;t be enough.

There&rsquo;s so much to absorb in this port city on the western edge of Honshu Island that several day trips, or a weekend stay, is needed.

My Sunday in February proved much too short. I missed Hiroshima Castle, a reconstruction of a late 16th century tower that includes a museum explaining the military and social duties of various Japanese castles.

The Hiroshima Museum of Art holds an impressive collection of French romantic painters, from Monet to Matisse. The city&rsquo;s Museum of Contemporary Art features a lesson in Japanese pop art. I ran out of time for both.

Still, in my one-day wanderings around Hiroshima, I managed to experience the three things I went looking for: a serving of comfort, a measure of sorrow and a little bit of peace.

Off the train just before noon, I went first in search of comfort in the form of a pancake, a good start on any Sunday morning and this one in particular.

Like most visitors to Hiroshima, I wanted to visit the city&rsquo;s park and museum dedicated to the victims of the atomic bomb dropped there on Aug. 6, 1945, by U.S. forces. The memorial area is nearly at the hypocenter, the ground zero for the atomic bomb. I needed sustenance before paying my respects.

And if there&rsquo;s such a thing as Japanese soul food, okonomiyaki might be it.

Calling okonomiyaki a pancake is a stretch because the cake part &mdash; a thin crepe layer that makes this stuffed marvel&rsquo;s foundation &mdash; goes almost unnoticed underneath piles of bacon, cabbage, seafood, noodles, egg and a showering of green onion. The dish originated in Osaka, but Hiroshima claims to have adapted it with a topping of Hiroshima&rsquo;s famous oysters as an added flourish.

The cooks at the aptly named Okonomi Yaki restaurant just off the city&rsquo;s main shopping district work an assembly line at an open griddle, frying, piling and amazingly flipping the stuffed pie until it works its way into a sizzling cast iron skillet that would make Denny&rsquo;s jealous.

I sat at the bar just opposite the griddle, mesmerized as each okonomiyaki became thinner down the line, despite being plied with more ingredients. A seat at the bar means you get to eat your food right off the griddle, and I did my best to polish off all but a slice. A framed signature from professional wrestler Stone Cold Steve Austin hanging on a nearby wall cheered me on.

With some comfort in my belly, I now had to cheer myself onward to the Peace Memorial Park and the A-Bomb Dome.

Hiroshima&rsquo;s central district is relatively compact, and the museums, the peace park, and the main shopping area are within about a mile and a half of each other. So after stuffing myself, I walked a few blocks west toward the park.

The peace park is filled with memorials and statues dedicated to the 140,000 victims of the atomic bomb explosion. The artwork, plaques and monuments all have one message: The people here never want another place on earth to suffer a similar fate.

On the day of the bombing, families and homes simply disappeared. The bomb absolutely leveled the city in about a 2-mile radius. Those who survived the initial blast died later, buried under debris, burned in citywide fires or after dehydration and infection set in. Months and years later, more died from cancer.

The park&rsquo;s Peace Memorial Museum slowly walks visitors through this painful journey, from Hiroshima&rsquo;s former home to Japan&rsquo;s 5th Army Division to its destruction and its recovery. The museum displays include the science behind nuclear power and the scientists&rsquo; role in creating, then protesting, the use of nuclear weapons.

The city&rsquo;s suffering and its political message are equally clear. One wall in the museum shows copies of decades&rsquo; worth of letters from the mayors of Hiroshima to leaders throughout the world as they tested nuclear weapons. The last two are addressed to George W. Bush and Kim Jong Il.

Outside, it proved easier to find signs of hope and healing. Paper cranes &mdash; a symbol of happiness and longevity &mdash; money, water and fresh flowers adorned many of the memorials throughout the park. Most of the visitors were Japanese, smiling and posing for pictures taken with cell phones.

Perhaps the most hopeful site lies at the northern end of the park. The Industrial Promotion Hall was one of a handful of buildings that survived the atomic blast and the fires that followed. Instead of razing it, city officials decided to preserve it as a reminder of the destruction.

Now, through its skeleton, one can see glimpses of today&rsquo;s Hiroshima &mdash; the lights from a baseball stadium, sky-scraping apartment towers, rebuilt department stores. This was my last stop in the park as I made my way back into the modern city. Along the way, people jogged and walked their dogs, kids ran ahead of parents without worry. The living, breathing Hiroshima is perhaps the best memorial of all.

I wanted a few more moments of peace before heading to the train station, so I wandered a few blocks north to the Shukkei-en Garden. This small but immaculately groomed garden originally was created in the early 15th century but was destroyed by the atomic blast.

Yet, like most everything else in Hiroshima, it was hard to imagine its absence. After the bomb hit Hiroshima, experts said it would be 75 years before plants would grow. Still, within a year, people found canna lilies flowering.

And on an early Sunday in February, 61 years later, the plum trees were blooming.

From Marine Corps Air Station Iwakuni, take the Sanyo JR train to Hiroshima Station, 740 yen (about $6) one way. Stop in the station&rsquo;s tourist office to pick up a map and a Seto Sea Island Welcome Card, which provides discounts for some tourist destinations. Also ask advice about walking around the city or taking the street car. I opted for walking and probably covered about three miles before the day was done.

The first atomic bomb used in warfare was dropped over Hiroshima by U.S. forces at 8:15 a.m. Aug. 6, 1945. It exploded about 1,900 feet above what is now Peace Memorial Park. The bomb leveled nearly every building for three square kilometers and the entire city broke out in fires. The weapon killed an estimated 140,000 people, both directly after the blast and subsequently from radiation diseases. The park includes an eternal flame, various memorials for victims, and a Centograph for Korean Victims. About 10 percent of the people killed were Korean forced laborers.

The museum gives an in-depth look at the history of Hiroshima as a trade, educational and military city, as well as the destruction of the bomb and its aftermath. It includes several graphic displays and stories about individuals who died during the bombing. It also talks about the science and politics involved in the nuclear age and makes an open call for the end of nuclear proliferation. Open daily, 8:30 a.m. to 6 p.m. March through November, closes an hour earlier the rest of the year; closed Dec. 29 to Jan. 1. Admission costs 50 yen (about 40 cents) for adults. Audio guide costs another 300 yen (about $2.50). www.pcf.city.hiroshima.jp

Statue of the A-Bomb Children (inside the park)

This statue and area are dedicated to the children who died in the bombing and afterwards as radiation took its toll. A crane, a symbol of happiness and longevity, sits atop the child to remember Sadako Sasaki, who was exposed to the bomb when she was 2 and died 10 years later from leukemia. Before she died, she set out to fold 1,000 paper cranes with the hopes of a cure. Her story and her art survived and has been copied by thousands.

A-Bomb Dome (inside the park)

Hiroshima&rsquo;s Industrial Promotion Hall was one of a handful of buildings that survived the atomic blast and the fires that followed. Instead of razing it, city officials decided to preserve the skeleton as a reminder of the destruction.

This shopping district is bordered by Chuo Avenue and Rijo Avenue and includes a covered shopping plaza and department stores full of goods, florist shops and restaurants. It&rsquo;s a good place to look for an inexpensive lunch &mdash; I found Okonomi Yaki here and stuffed myself for 1,250 yen (about $10). You also might consider picking out a bouquet of flowers before heading over to the memorial park.

This small but immaculately groomed garden was originally created in the early 15th century and was destroyed by the atomic blast. But like most everything else in Hiroshima, it has been rebuilt and it is hard to imagine its plum trees and peonies were gone for a time. Open daily from 9 a.m. to 6 p.m. April through September; closes one hour earlier the rest of the year. Admission costs 250 yen (about $2) for adults and 180 yen (about $150) for children.