Hikes through history provide education as well as exercise 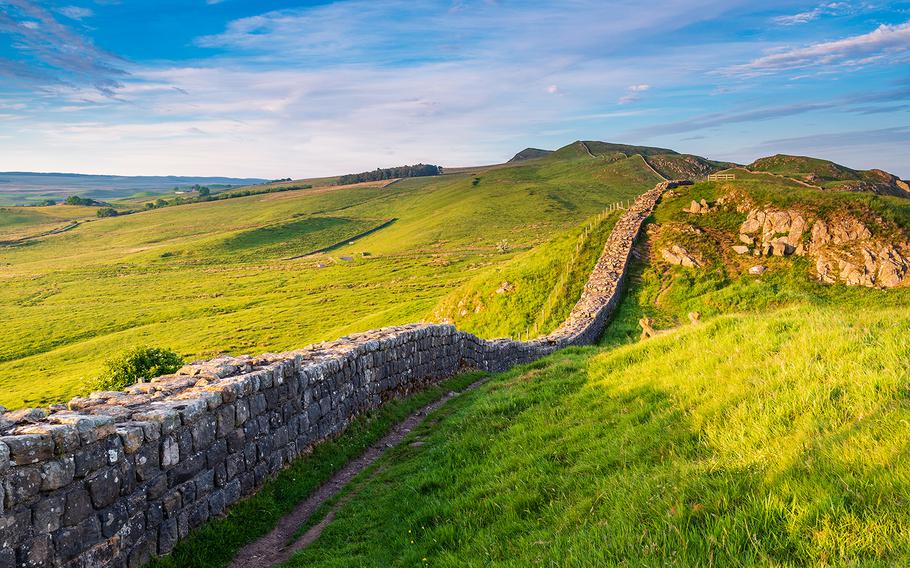 A World Heritage Site since 1987, Hadrian’s Wall is an astounding feat of engineering. It’s the best known and the best preserved frontier of the Roman Empire. (iStock)

Despite the pithy wisdom, all roads don’t lead to Rome. While the origins of the expression may speak to the popularity of pilgrimages back in the Middle Ages, Europe is crisscrossed by a number of trails that have nothing to do with journeys undertaken for spiritual reasons. Borders, battles and the caprices of nature are the groundwork upon which these themed trails were conceived.

Hadrian’s Wall Path, EnglandAround 122 A.D., the Roman emperor Hadrian ordered the construction of a defensive fortification marking the northwest boundary of the Roman Empire, a massive construction project that historians believe must have taken an army of some 15,000 men at least six years to complete. Most of the wall is constructed of stone, with other sections fabricated from turf. A small fort marked every Roman mile, and two observation turrets stood in between. Larger forts and a ditch flanked by parallel mounds provided the structure with additional security.

The Hadrian’s Wall Path stretches alongside its partially intact remains, a distance of 84 miles, across northern England. The National Trail runs between Wallsend, Newcastle upon Tyne on the east coast to Bowness-on-Solway in Cumbria on the west coast. Reasonably fit walkers generally complete the trek between the two points within six or seven days. The route passes through field and mountainous terrain, with the 23-mile section between Chollerford and Birdoswald considered the most difficult. Highlights along the route include a pair of Roman forts, the Vindolanda archeological site, and the Roman Army Museum. Hostels and bunkhouses provide inexpensive accommodation along the way. Country pubs and “glamping” facilities are more upscale options. From April through October, the AD122 Hadrian’s Wall Country Bus provides transportation along the route. Online: hadrianswallcountry.co.uk

Cammino nelle Terre Mutate, ItalyOn April 6, 2009, a 6.3-magnitude earthquake rocked the Abruzzo region of central Italy, causing huge damage to the city of L’Aquila, some 50 miles northeast of Rome, and surrounding communities. Over the following three months, thousands of aftershocks rippled through central Italy. More than 300 people were killed and some 60,000 left homeless.

The Cammino nelle Terre Mutate, or “walk in changed lands” is a 160-mile, 14-stage trek along the fault line of the tragic event. Running between Fabriano and L’Aquila and traversing the Marche, Umbria, Lazio and Abruzzo regions, as well as two vast national parks, the trail poses a challenge even for seasoned hikers. Termed a “solidarity trail,” the route shines light on the people and projects fostering rebirth and regeneration in the economically devastated region and brings with it much needed jobs within the area of sustainable tourism. Hikers can overnight in “agriturismo” farmhouses serving home-cooked meals, bed-and-breakfasts, bare-bones accommodation or even a handful of monasteries. Online: camminoterremutate.org

Harzer Grenzweg, GermanyFrom 1949 to 1990, the German Democratic Republic (East Germany) and the Federal Republic of Germany (West Germany) were separated by the Innerdeutsche Grenze, or Inner German border. The heavily fortified 870-mile divide ran from the Baltic Sea to the town of Hof in Bavaria. The cleared strip so tragic for families caught on opposing sides proved a boon for nature, and since reunification, the “Green Belt” unites an array of biotopes providing a home for trees, birds, insects and animals.

In 2006, the Harzer Grenzweg, or Harz Border Path, was created upon the dead zone where mines and automated shooting systems once stood. It passes by remains of walls, warning signs and metal fences and over the concrete slabs that once formed the “Kolonnenweg” for the transport of men and materials, as well as moors, mixed forests and trickling streams. The route also incorporates the Harz’s highest mountain, the Brocken, an off-limits zone during the time of East Germany. The 56-mile path begins at a border watchtower in Rhoden and finishes in Bad Sachsa, where the Grenzlandmuseum adds a poignant touch to this walk. Online: en.harzinfo.de/pure-nature/the-green-belt-in-the-harz

Remembrance hikes in LuxembourgLest younger generations forget the horrors of World War II, the Grand Duchy has organized five themed routes through field and forest, over hills and past manmade structures. None of the way-marked routes are too long or strenuous, and due to the country’s diminutive size, none are too far away from one another.

The “Passeurs” path in Troisvierges offers both an eight and a six-mile route along the once-secret pathways winding through the Ardennes forest and into Belgium. The paths were used to facilitate the escape of members of the resistance and young people seeking to evade forced conscription. The 7.4-mile Clervaux-Troisvierges path passes by the Cinquefontaines convent, confiscated by the Nazis and used as a holding and transit camp for Jews destined for eastern European ghettos and death camps, as well as the site of the downing of plane carrying four Royal Air Force crew members and three Belgian secret agents in March of 1945 and the “Family of Man” photography exhibition. The two-mile Schumann’s Eck path near Doncols winds past foxholes used by German and American forces fighting in the Battle of the Bulge in 1944-1945 and takes in the National Liberation Memorial. The 1.6 mile “Spurensuche World War II” trail is an easy urban hike winding past 12 of the capital’s most emblematic WWII historic sites and memorials. Online: tinyurl.com/54yd7x3r