The roughly thousand steps of Koko Crater Trail lead to the 1,200-foot summit of the volcanic tuff in southeast Oahu. (Wyatt Olson/Stars and Stripes)

The roughly thousand steps of Koko Crater Trail lead to the 1,200-foot summit of the volcanic tuff in southeast Oahu. (Wyatt Olson/Stars and Stripes) 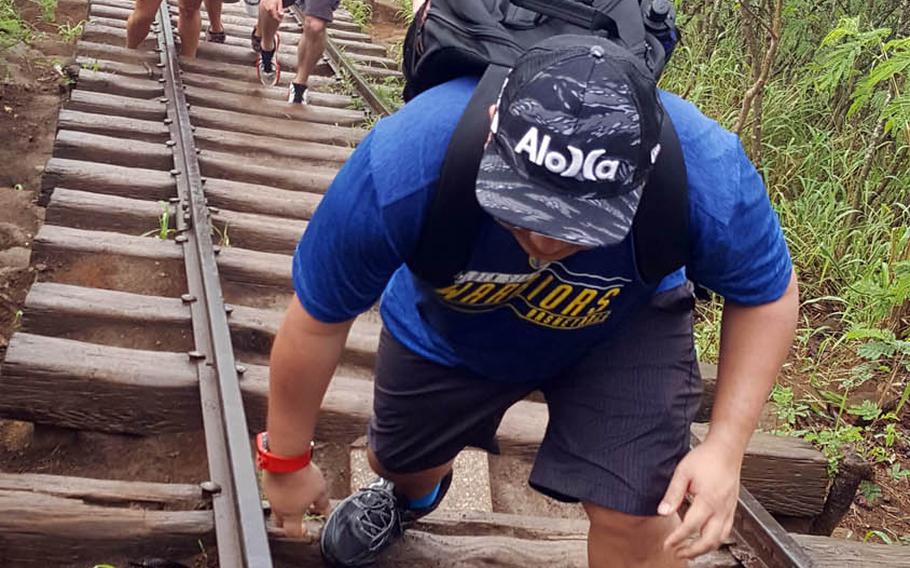 The final portion of the Koko Crater Trail in Hawaii is a doozy. (Wyatt Olson/Stars and Stripes) 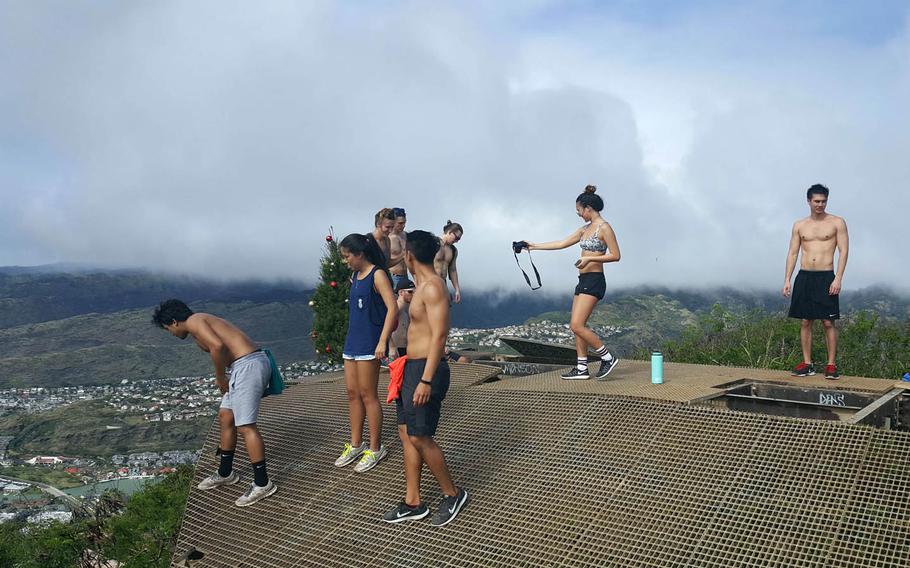 Hikers check out the view from atop the collapsed steel-grated roof that once covered the military tramway terminal on top of Koko Crater in Hawaii. (Wyatt Olson/Stars and Stripes) 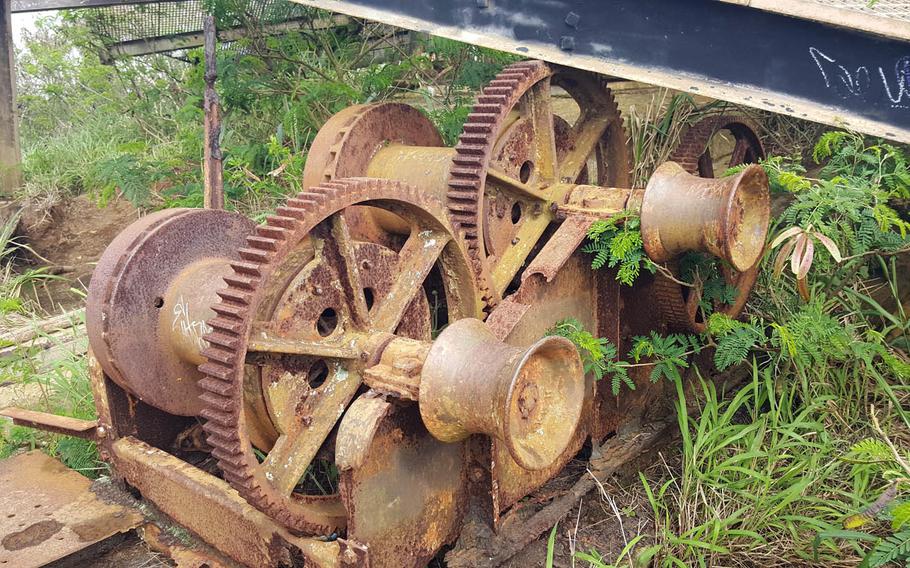 The World War II-era winch gears still sit on top of Koko Crater in Hawaii. They were used during the war to haul men and materiel to the defense complex built at the summit. (Wyatt Olson/Stars and Stripes) A climber gingerly descends the steps of Koko Crater Trail with an infant strapped to her chest. Rain has made the rail ties slippery. (Wyatt Olson/Stars and Stripes)

Some have dubbed it the “Stairmaster from Hell,” others the “Stairs of Doom.”

For the occasional hiker, however, it can be a daunting trek straight up more than 1,000 steps on the side of the volcanic tuff cone of Koko Crater on the southeast corner of Oahu.

The trail is the largely intact remnants of a cable car track that was laid during World War II for transporting men and materiel to a defense complex on the summit.

Most any other trail to the top of a 1,200-foot peak would use switchbacks to wind the way up the mountainside. But Koko Crater Trail is just high step after high step.

Yes, “high” step — the rail ties were not laid in a sequence that makes stepping handy, even if you’re tall. There are other difficulties: the steep incline near the peak can get clogged with hikers going up and down on the same narrow set of steps, and you will not be able to choose your own pace. Rain clouds frequently push themselves over the trail from the windward side of the island and douse the steps with a slippery sheen.

On a recent hike, I was about three-quarters of the way up and standing just off the steps for a rest as a misty rain fell. Suddenly a young woman nearby slipped on a downward step and toppled in a summersault a half dozen steps. Amazingly, she righted herself, rubbed her elbow and continued on.

All that said, you’ll see every age and body type making this hike — and making it to the top. I’ve seen numerous women with babies strapped to their torsos making the climb. I recently saw a woman carrying a girl who looked about 4 years old in an aluminum rack strapped to her back.

Even President Barack Obama has taken a stab at it. During his holiday vacation in Hawaii last year, he, his family and friends — and Secret Service agents, of course — made the climb amid selfie-crazed hikers.

A wealthy estate gifted the acreage that holds Koko Crater to the city of Honolulu in 1928. With the outbreak of the war in 1941, the military built the tramway, whose cars were winched to the top with a gasoline engine. The rusty gears of the winch are still perched at the summit, as well as the outcroppings of pillboxes connected by tunnels.

There’s no easy access to those tunnels, but climbers make the easy leap atop the now-collapsed steel-grated roof of the tram’s terminal.

There’s no sign of the base camp below that once quartered the soldiers who built and manned the summit defenses.

The entire property was turned back to the city in 1966.

The first half of the stairs are at a relatively easy grade, but then give way to the notorious “bridge” section of track. There’s nothing between each rail tie except a view of the dark undergrowth 10 to 30 feet below.

For some climbers, this is the most unnerving section. Wary climbers have worn a detour path through the brush beside the track, opting to keep their feet on solid ground.

Some hikers crawl on all fours to pass over the roughly 40-foot span. Others bound across like it’s their front lawn.

The last section before reaching the top — roughly a fifth of the trail — is as steep as stairs into an attic. You’ve come too far to give up, but it takes longer than you’d expect to climb that portion.

It’s usually on this part that fellow climbers, standing beside the track for a breather, spin tales about the “regulars” who bound up the tracks at amazing speed. I’ve heard claims that it’s been done in under 10 minutes.

I’m an average walker, and it takes me about an hour to get to the top. We mortals like to spend at least a half-hour resting at the top, gazing at the magnificent view of the southern part of Oahu, including all of Hanauma Bay.

The walk down is quicker, of course, even with rubbery-feeling legs.

7604 Koko Head Park Road, Honolulu. From Waikiki Beach, take Interstate H-1 east, which turns into Kalanianaole Highway for about 10 miles. Turn left on Koko Head Park Road and after a couple hundred yards turn left onto Anapalau Street, along which are parking lots for Koko Head District Park. Signs point toward the trail head, which is about 100 yards away.

No set hours. Let dawn to dusk be your guideline.

This is a strenuous hike with no shade. Bring sunscreen. Best to start early in the morning while the sun is low in the east. Rain clouds frequently float on and off Koko Head, so some light rain gear comes in handy. The stairs become slippery during rain. Bring enough water and snacks to last roughly two to four hours of rigorous climbing and descent.