Hiji waterfall: Trekking through Okinawan national park takes effort, but it’s worth it 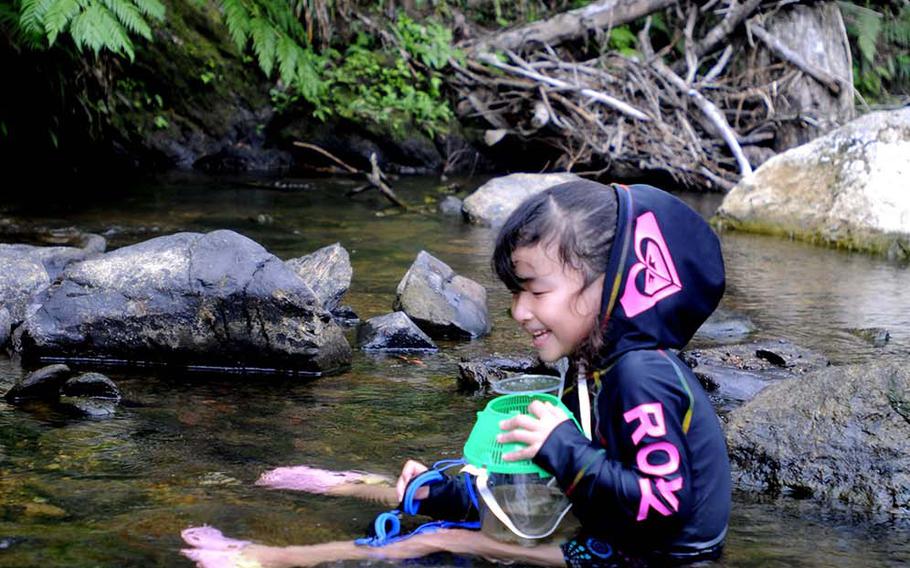 Visitors to Hiji Falls National Park, Okinawa, Japan, are discouraged from entering the water, but many locals enjoy the river for both its cool waters and the opportunity to catch a small fish or two. (Lisa Tourtelot/Stars and Stripes)

Visitors to Hiji Falls National Park, Okinawa, Japan, are discouraged from entering the water, but many locals enjoy the river for both its cool waters and the opportunity to catch a small fish or two. (Lisa Tourtelot/Stars and Stripes) 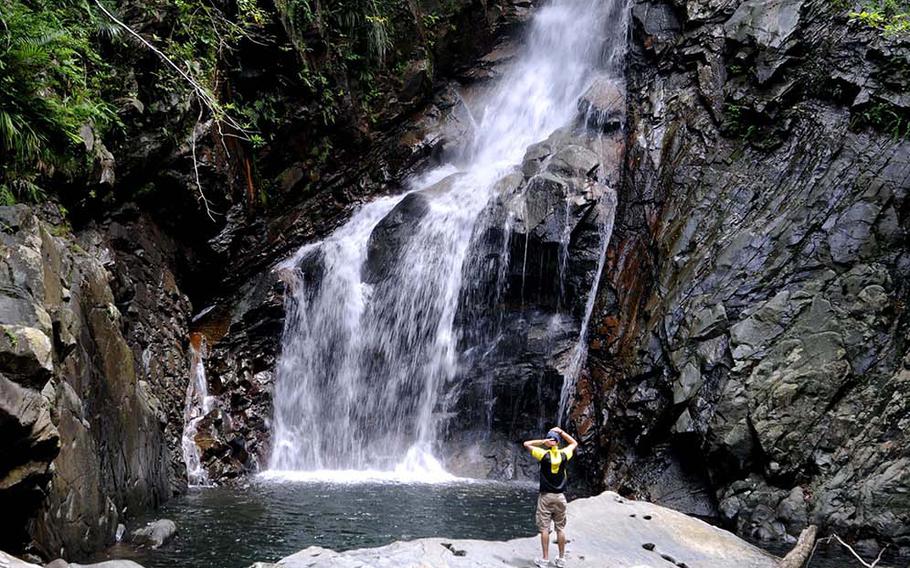 Although off-limits, many tourists can't resist climbing as close as possible to the Hiji waterfall at Hiji Falls National Park, Okinawa, Japan. (Lisa Tourtelot/Stars and Stripes) At 85 feet, the Hiji waterfall is the highest waterfall in Okinawa, Japan. (Lisa Tourtelot/Stars and Stripes) 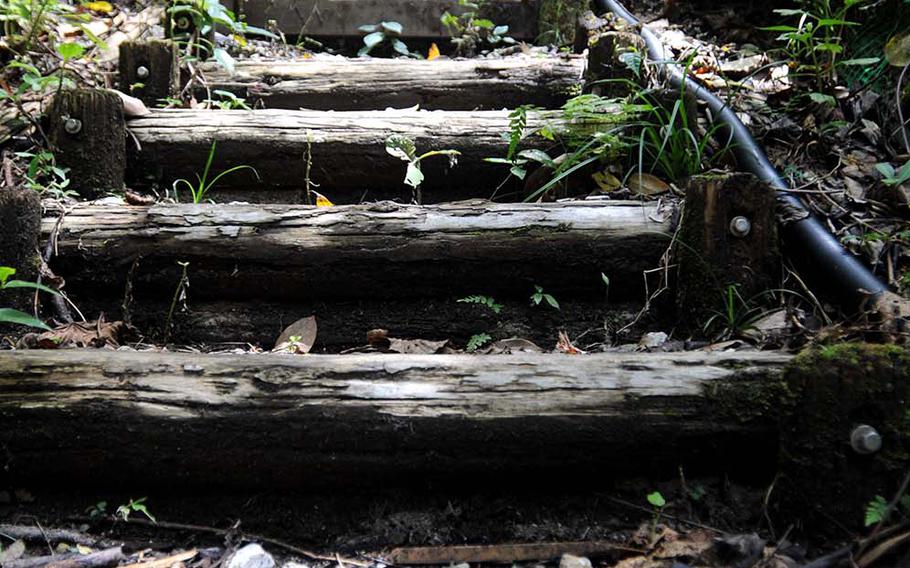 Approximately 3,000 steps line the trail to the Hiji waterfall at Hiji Falls National Park, Okinawa. Don't climb these, though, they are off limits. (Lisa Tourtelot/Stars and Stripes) 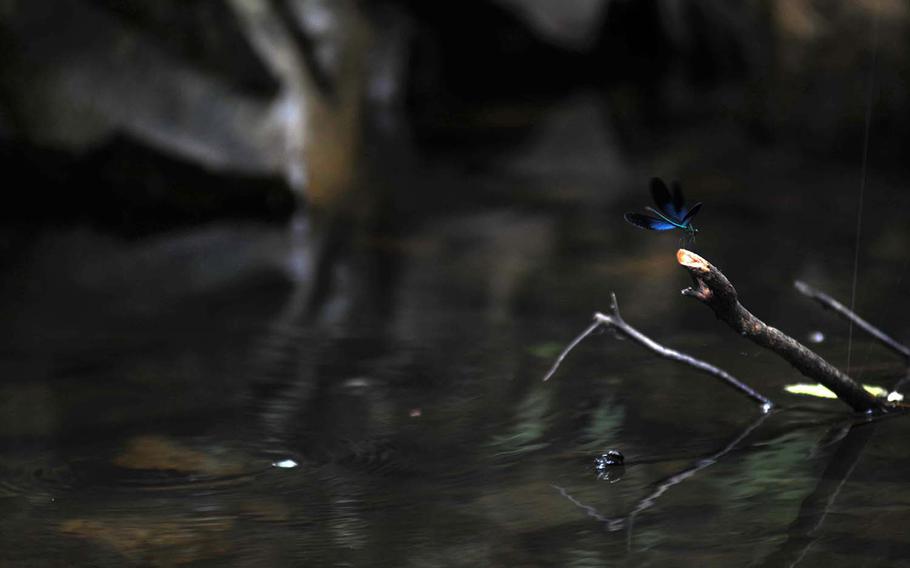 Damselflies are among the brightly colored sights on the trail to Hiji Falls, at Hiji Falls National Park, Okinawa. (Lisa Tourtelot/Stars and Stripes) 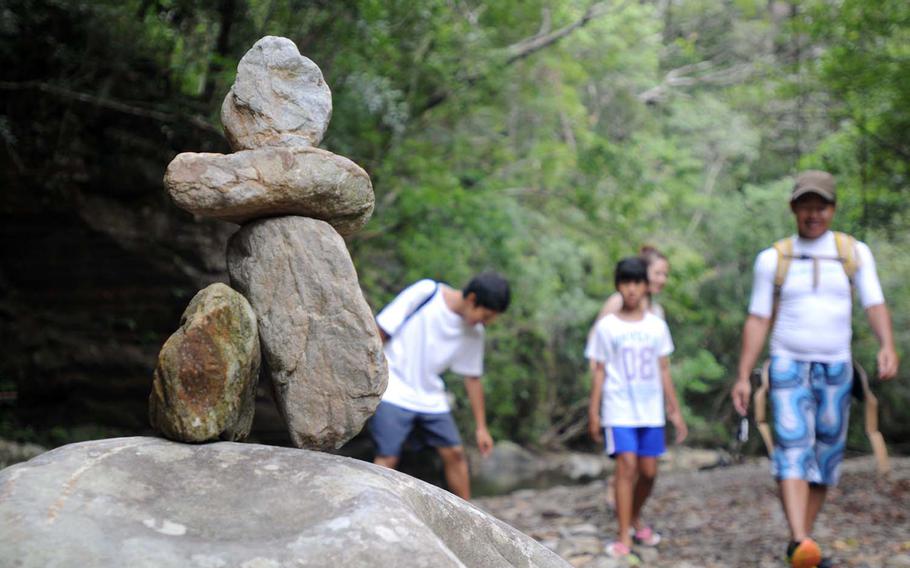 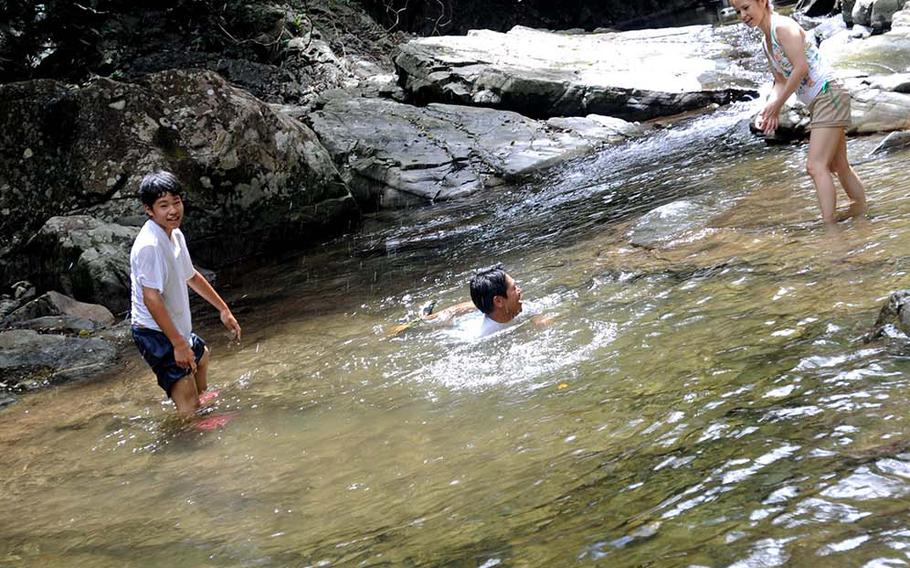 Few sensations match being surrounded by falling water — a river splashing around rocks, a waterfall in the distance and small streams trickling down mountainsides.

That is the essence of the one-mile hike up to the Hiji waterfall on the northern side of Okinawa, Japan.

Hiji is part of a national park and it takes stamina to walk the river valley trail. “We weren’t expecting all the stairs,” said Athena Bruce, a Marine Corps wife who recently toured the park. But visitors are rewarded with abundant wildlife and natural wonders.

While trekking up and down Hiji trail’s nearly 3,000 stairs, you may see friendly Ryukyu robins, gem-colored butterflies, dragonflies and damselflies flit through the air. With a little more luck, the Okinawa rail, a critically endangered flightless bird species that is unique to Okinawa, might make an appearance.

Mudskippers, small fish known for their ability to walk on land, as well as long-limbed crawfish, various fish, turtles and crabs live along the freshwater river leading up to the falls.

If you are feeling more adventurous — or just want to avoid some stairs — take the riverside trail where it splits from the main path. This trail is less crowded and closer to the river, though it also features some not-so-sturdy looking bridges.

In the sweltering jungle heat, dipping your toes in the clear, cool river water is very tempting. But military personnel and dependents are not allowed in the water as years of algae growth have made the rocks dangerously slick.

Even when keeping clear of the water, the riverside trail might be safer and more comfortable with a good pair of water shoes or dive boots. Also, the summer heat along the Hiji trail can be intense, so clothing that can withstand sweat — or an accidental fall into the water — will be the most comfortable. Hikers would be wise to pack extra water, bug spray and sunscreen.

The apex of the national park’s river trail is the Hiji waterfall, the highest in Okinawa at 85 feet. The falls draws thousands of tourists a year for a reason — it’s spectacular.

Hikers can gather on a platform at the end of the trail for gorgeous views as the water pours into a deep blue pool surrounded by boulders and vegetation.

Getting any closer to the falls is off limits. Despite the seeming depth of the pool, the dark water hides shallow rocks and other potential hazards.

Reaching the top of the falls is a fitting and beautiful end to the strenuous trip up. For this hike, the juice is definitely worth the squeeze.

Directions The park is located in Okinawa Honto, down the road from Okuma beach, approximately two hours north of Camp Foster. Take Highway 58 north to the Okuma turn. Instead of turning left to get to the beach, turn right and follow the road for approximately one mile. Marine Corps Community Services hosts regular tours to the park and Okuma beach.

Times Hiji Falls National Park is open from 9 a.m. to 6 p.m. during the summer months, and 9 a.m. to 5:30 p.m. from November to March. The park closes during extreme weather.

Visit www.japan-guide.com/e/e7120.html for detailed information, as well as maps, bus guides and other local tour options.