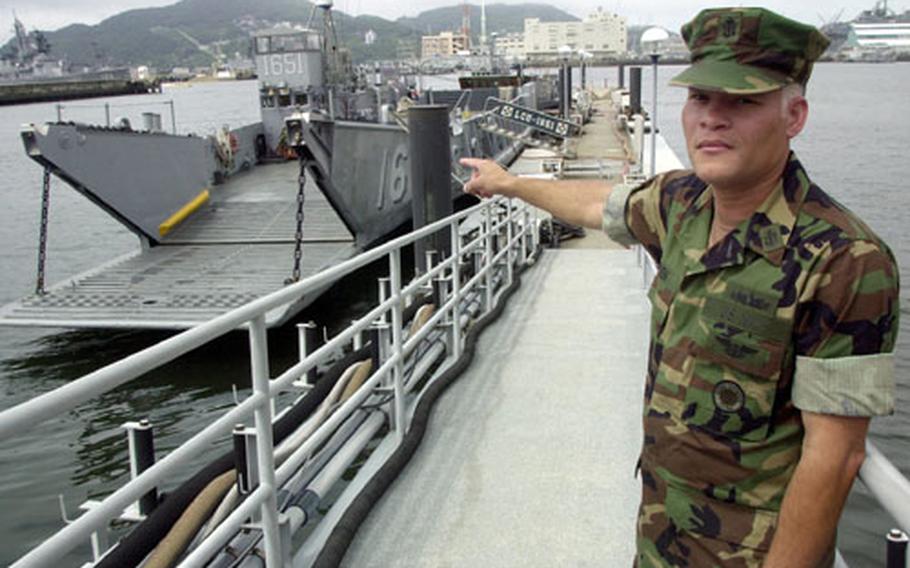 Chief Petty Officer Howard Bowen, officer in charge of Assault Craft Unit One, detachment Sasebo, points out Landing Craft Utilities, such as LCU 1651 berthed in the Juliet Basin. The berthing, heads, galley, engine room and other spaces are located below the water line. (Greg Tyler / S&S)

The 14-member crews on each of the Landing Craft Utilities, or LCUs, pamper the small boats, performing almost the same tasks carried out on much larger ships.

Below the sparse utilitarian deck of an LCU is a surprisingly spacious berthing and bathroom area, with compact accoutrements such as offices, galley, air conditioning room, engine spaces and storage areas.

&#8220;Unless they&#8217;ve been on an LCU before, most people have no idea that all of this space is here because it&#8217;s all located under the deck, and below the water line,&#8221; Chief Petty Officer Howard Bowen said. Bowen is in charge of San Diego&#8217;s Assault Craft Unit One, Sasebo Detachment.

ACU-1 sailors operate and maintain four LCUs from their facility along the Juliet Basin.

Sailors assigned to LCUs are some of the first to &#8220;stick their necks out&#8221; during a real world amphibious invasion, and because they carry essential equipment to a beach &#8212; trucks, tanks, ammunition and supplies, and at times as many as 175 troops &#8212; they&#8217;re also valuable targets.

&#8220;The average survival time for sailors on LCUs in combat situations is less than three minutes,&#8221; Bowen said. All the guys in his 56-man unit know this statistic. In recent years, ACU-1 was used for humanitarian relief in East Timor, as well as Thailand and the Philippines.

Despite the dangers, ACU-1 sailors said they like being assigned to the small vessels.

Bowen arrived for duty in Sasebo in 1998; his previous assignments were large ships. He said it takes a certain individual to thrive in an LCU environment.

&#8220;The unit is small, and the crews have an average of 14 personnel, so they know each other very well, and spend a lot of time together. It&#8217;s much different than serving on a large ship where you might only know the people who work in your immediate area,&#8221; Bowen said.

He added that those who thrive in an LCU assignment prefer team-oriented assignments and being part of a close-knit group. Those who are loners, or don&#8217;t like to work closely with others, &#8220;would have a hard time in this billet.&#8221;

One year ago, Bowen recalled, an ACU-1 landing craft utility was used to transport a helicopter and an F-14 &#8212; at the same time &#8212; from Iwakuni Marine Corps Air Station to one of the ships in Sasebo.

The LCUs are limited in that they can&#8217;t drive onshore, and they need to land on a gradually inclining beach; the back end of the LCU must remain in plenty of water.

&#8220;Each LCU has a craft master, who is in charge of that boat. Next to the craft master is the chief engineer, and there&#8217;s a navigator, engineers and deck department personnel; it&#8217;s very similar to the large ships, just a smaller scale.&#8221;

Until just recently, a housing shortage forced sailors attached to ACU-1 to actually reside on their LCUs in port. A new eight-floor, 400-unit Bachelor Enlisted Housing tower, located about 200 yards from the ACU-1 headquarters, opened for occupancy several months ago.

Last month, Petty Officer 3rd Class Neil Dyer, a boatswain&#8217;s mate, was aboard LCU-1651 in the berthing compartment snagging a power nap in his rack.

Bowen said LCUs are capable of remaining at sea for 10 days, and carry enough diesel fuel to travel about 1,200 nautical miles, or about 1,381 miles.