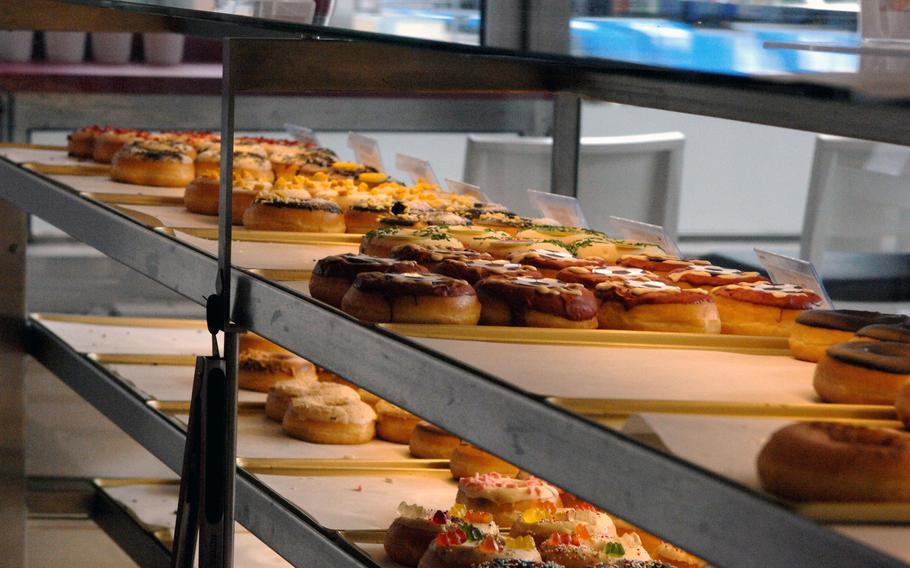 A variety of doughnuts is displayed at Happy Donazz in Kaiserslautern, Germany. The newly opened breakfast spot offers dozens of choices, along with muffins, bagels, coffee and other morning staples. (Gregory Broome/Stars and Stripes)

A variety of doughnuts is displayed at Happy Donazz in Kaiserslautern, Germany. The newly opened breakfast spot offers dozens of choices, along with muffins, bagels, coffee and other morning staples. (Gregory Broome/Stars and Stripes) 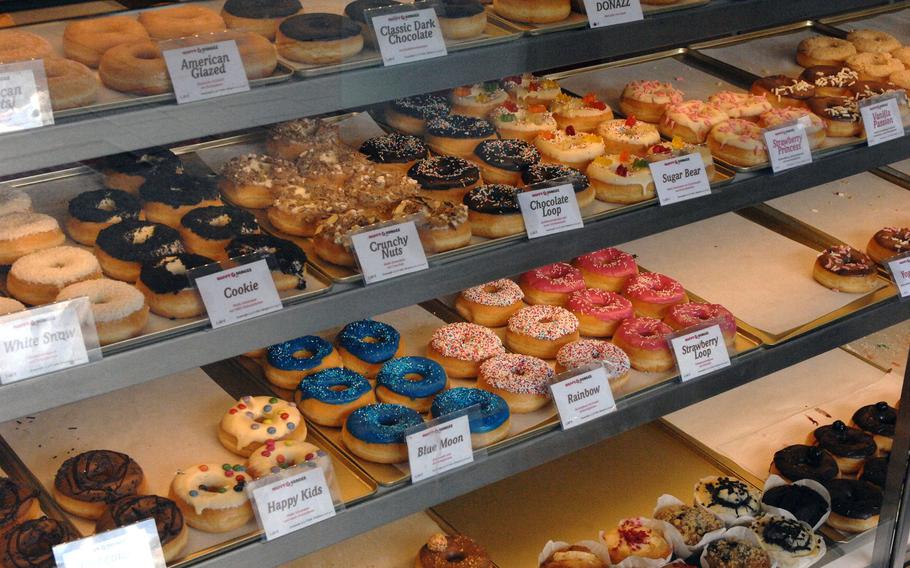 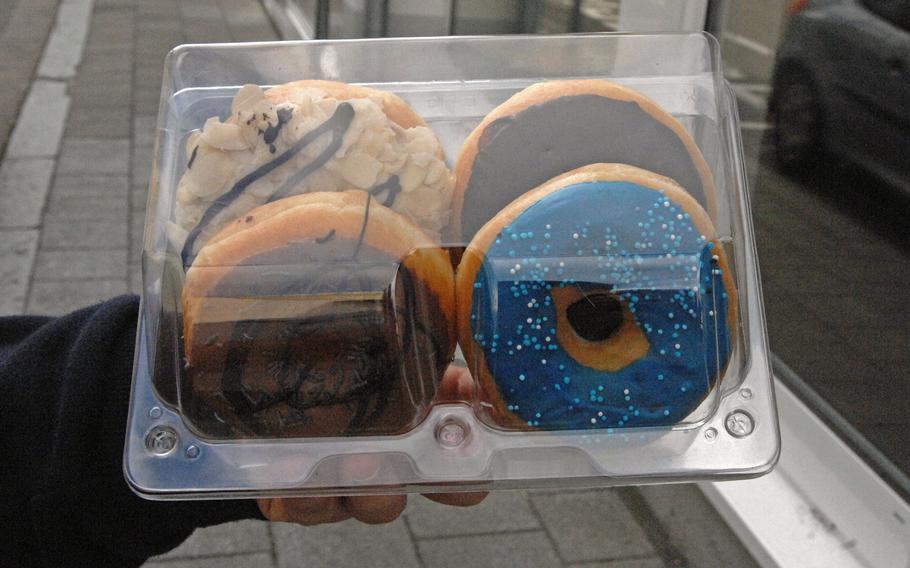 A customer holds a container of doughnuts outside of Happy Donazz, a newly opened breakfast spot in Kaiserslautern, Germany. The pack of four unfilled donuts costs just under 6 euros, the smallest of a line of to-go boxes that includes a 24-doughnut option for nearly 29 euros. (Gregory Broome/Stars and Stripes) 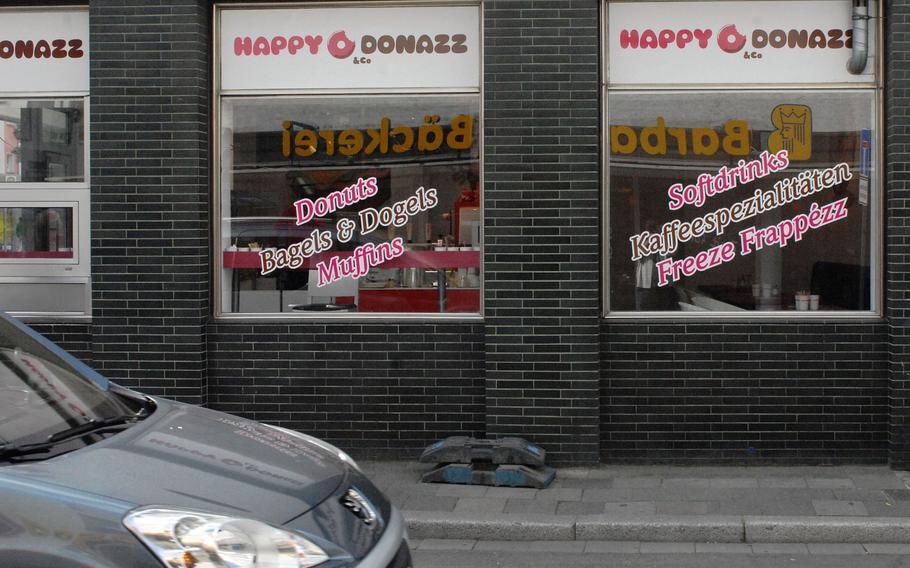 The sign for neighboring eatery Barbarossa Baeckerei is reflected in the windows of Happy Donazz, a newly opened breakfast spot in Kaiserslautern, Germany. The proximity of the two competitors might create a rivalry for sugary breakfast foods in the area. (Gregory Broome/Stars and Stripes)

Breakfast in Germany can be a bit problematic for non-native diners. There’s sometimes fish involved, which is a nonstarter for many Americans. One can find eggs, but rather than scrambled and paired with bacon, they’re generally hard-boiled. It’s hard to argue with cold cuts, cheese and bread, especially in Germany, but such a meal is known as lunch to many Americans.

The way around this predicament, unfortunately, is sugar.

Germany certainly knows how to make a good pastry and places it in front of potential customers in nearly irresistible ways. Walk down a pedestrian zone in any good-size German town and you’ll pass a number of bakeries with doors flung wide open to reveal heaping mounds of hazelnut, chocolate and fruit-based delicacies.

In downtown Kaiserslautern, two such establishments face off on a single intersection. In one corner is an established outpost of Barbarossa Bäckerei, the ubiquitous chain that offers a solid, predictable array of breads and baked goods. Opposite it is Happy Donazz, a brand-new location of a growing chain specializing in doughnuts.

Being very familiar with what Barbarossa has to offer — try the Nussplunder and the Apfeltasche, but please leave a couple for me — my wife and I ventured into Happy Donazz on a recent weekday morning. The shop is colorful and inviting. The walls of the dining room are adorned with graffiti-style images of doughnuts, including a depiction of Homer Simpson’s famous pink-icing favorite.

At the front of the store is an overwhelming display case, split evenly between doughnuts with and without filling, featuring treats with English-language names like Happy Kids, Strawberry Princess, Vanilla Passion and Sugar Bear. Friendly, English-speaking staff awaits your order. The only challenges are arriving at a decision and announcing your chosen flavors with a straight face, a task that evokes the awkwardness of grown adults ordering “Moons Over My Hammy” at a stateside Denny’s.

But it’s worth the potential embarrassment. It’s hard to do a doughnut wrong, but these are very good — light but satisfying, topped with a subtle glaze and a decidedly unsubtle icing on top. I tried a bite of four flavors; I’d call Classic Dark Chocolate my favorite, partly because I was less self-conscious ordering it than a Nougat Temptation, but I had no complaints about any of them.

Though doughnuts are obviously the attraction here, Happy Donazz offers a cursory selection of bagel sandwiches and muffins, along with an impressive line of fruit drinks and hot and cold coffee concoctions.

It’s hard to say if one humble Kaiserslautern intersection can support both sides of a developing bittersweet rivalry between Barbarossa and Happy Donazz. But in lieu of other breakfast options, I’ll be doing my part to keep both in business.

Know a restaurant or entertainment spot you’d like to see reviewed in After Hours? Email eurodesk2@stripes.com.