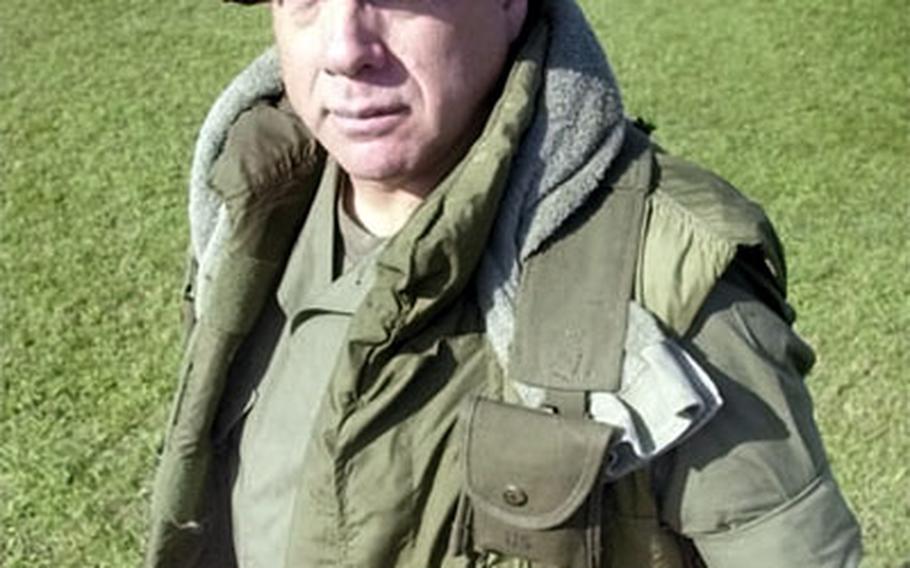 The yellow-and-red ribbon was reissued recently for service for the war on terror. But as many veterans of the Persian Gulf War added their first star to their ribbons, Cammack fastened on his second &#8212; joining a few aging generals and senior noncommissioned officers.

The first time he saw the ribbon, the Marine at Camp Foster, Okinawa, was like many of today&#8217;s fresh-faced privates first-class in the Marine Corps.

He joined as there was talk of war in a distant land. Only it was 1967. The war wouldn&#8217;t be waged in the desert but the jungles of Vietnam.

Cammack is a 55-year-old Marine reservist, activated for the war on terror. He&#8217;s taking his chance at one last tour to finish his 36-year career the way it began: On active duty, helping Marines prepare for combat.

Cammack recalls that line over and over, for Marines at base communication on Okinawa and in units across the island. His ripsaw voice and fading scars betray the new computer-pixilated Marine camouflage uniform. He&#8217;s a slice of the old breed serving in the 21st century Marine Corps, a bridge, an opportunity for today&#8217;s Marines to see up-close those who helped forge their fighting force&#8217;s legacy.

Cammack arrived in Vietnam in January 1967 with just a sea bag on his back and something today&#8217;s Marines never use: a service number.

He had no weapon, no gear and only a faint idea of what lay ahead.

The learning curve, though, was steep. His first night in Vietnam was on Hill 41, staying in the corpsmen&#8217;s tent. A patrol went out soon after he arrived. Within hours, that patrol would bring him face to face with war&#8217;s horror.

The next morning the patrol returned, carrying the fallen Marine. Cammack still recalls the limp legs dangling from the poncho they used to carry the body.

It was laid in the tent where Cammack just had spent the night; he and another Marine were ordered to go through the Marine&#8217;s pockets to collect personal effects. They were afraid to uncover the face; the Marine had been shot in the head. They left him covered until another Marine yanked the poncho back to speed the process.

The next day proved no better. Cammack arrived at his unit, 2nd Battalion, 4th Marines on Hill 22. He finally got the weapon and field gear he would carry into battle.

But soon, life became routine. Cammack carried mortar rounds for his squad. For the next few months, not much happened. Patrols were long and along the same patch of road.

Cammack also began to wonder what combat might really be like. His answer came almost as soon as he voiced the question.

His unit, ordered to secure a downed helicopter, had stopped near a river within sight of a pagoda. He and another soldier were sent to refill canteens. When they returned, the unit paused for a bite of C-rations.

As they ate, he asked one of the short-timers, who&#8217;d never been hit, what the shooting would be like.

&#8220;You could see rounds hitting the ground, hitting the trees, bark flying off some of the trees that were close by.&#8221;

Cammack&#8217;s vision of combat changed in an instant. No offhand John Wayne shots. Marines hugged the ground, fumbling with the new M-16 that jammed constantly. Then he saw the assistant machine gunner get hit.

The time felt like an eternity, Cammack said. But it was only about 15 minutes. He said he hardly thinks about the moment anymore. Still, decades later, he fought tears as he recounted the firefight that earned him a Navy Commendation Medal with a Combat &#8220;V&#8221; for valor.

The encounter steeled him, though. He paid little attention to the jungle rot that still plagues his feet or the exploding land mine that later peppered his arm and shoulder with shrapnel. It took a snake bite to get him evacuated.

He recovered to return to his unit. But the wounds to his shoulder still ached. He was carrying a radio by then and had to do it half-bent over to cope with the pain. He was shipped to the Naval Hospital at Yokosuka, Japan, after tests at local military hospitals couldn&#8217;t find the problem. There, doctors found a deep bacterial infection and ordered Cammack evacuated to recover in the States.

He served out his enlistment at HMX-1, the squadron of Marines guarding the president. In 1971, for the sake of his marriage, he left the Corps. The parting, he said, was half-hearted.

After the marriage ended in divorce in 1980, Cammack considered returning to the Corps &#8212; but gave up the idea after being told he couldn&#8217;t keep his former rank.

Then a girlfriend convinced him to go to a Vietnam veteran&#8217;s parade in Chicago in 1986. Cammack said he found Marines he knew there, who couldn&#8217;t believe he was out of uniform. They told him about joining the reserves. It had been 18 years since he&#8217;d worn the uniform but soon he again was standing tall in his hometown reserve center.

Cammack&#8217;s unit was called up for the Gulf War. Soon Marines started asking him the same question he&#8217;d once asked: What will it be like?

Cammack also made them a promise: He would ensure everyone was brought home &#8212; dead or alive. His unit returned in May of 1991; to his relief, Cammack saw no repeat of Vietnam.

The Sept. 11 attacks rekindled the question in yet another generation of Marines. Cammack retold his stories, recounted his fears and reassured the Marines that they were ready to serve.

But his own tenure was coming into question. With 18 years of service under his belt, Cammack was dropped into the Individual Ready Reserve. Drill time would be on his own; retirement as a Marine wasn&#8217;t a sure thing.

Last February, though, the aging warrior got a reprieve. He was recalled to service here on Okinawa. He left behind a small service business. His wife, Nancy, has been running it &#8212; and dealing with her cancer surgery &#8212; on her own.

He also credits her support with pushing himself long after many are enjoying their grandchildren. He&#8217;s trying to stay on for one last year until he can retire his uniform. It&#8217;s a burden physically, financially and emotionally, he said, but one he&#8217;s determined to bear.

Giving back for Cammack means passing on his combat lessons, even the simple ones. One other Marine in his section also was in the Gulf War. He reminds his Marines to keep plastic bags on hand for waterproofing gear. He keeps their wills updated and reminds them to explain deployments to families.

Passing along the knowledge is a burden he feels strongly.

He mentions the Vietnam Memorial, names of &#8220;a little over 58,000 men and women on a granite wall in Washington, D.C. If I touch one or two of these Marines during my time on active duty, if I remind them about what it was like and hopefully &#8230; maybe we will not ever have to build another memorial for our sons and daughters.&#8221;

It&#8217;s also a personal mission. Cammack said he wants to repay the debt of honor he feels for Marines with whom he served.

Reports from the Vietnam war

From the archives: Links to some stories and photos filed by Stars and Stripes reporters and photographers during the Vietnam war.An assignment near the Cambodian border in July, 1966 became a matter of survival for a Stripes reporter when the 12-man squad he was with came under attack.Story and photosFrom August, 1969, two S&S staff reports on fighting in the rugged Hiep Duc valley.Stories and photosFrom March, 1966, Operation Utah &#8212; a joint U.S.-Vietnamese Marine effort near Quang Ngai.Story and photos

Veterans Day 2002: Marking the 20th anniversary of the Vietnam Veterans Memorial in Washington, D.C.Story and photos