The fortress wall surrounding the old town of Gradisca d'Isonzo, Italy, stands 60-feet tall at some points and dates to the 15th century. (Jason Duhr/Stars and Stripes)

The fortress wall surrounding the old town of Gradisca d'Isonzo, Italy, stands 60-feet tall at some points and dates to the 15th century. (Jason Duhr/Stars and Stripes) 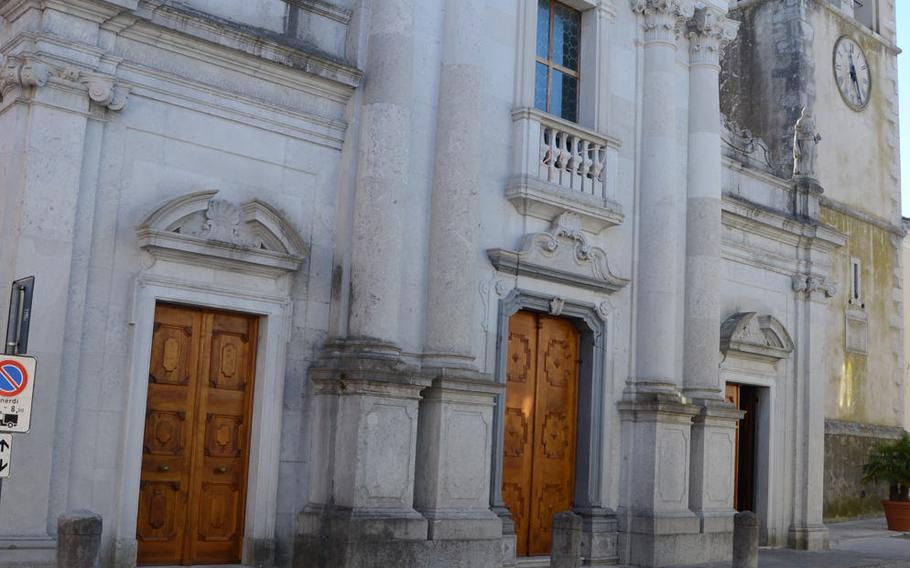 The Cathedral of Saints Peter and Paul in the city of Gradisca d'Isonzo in northeastern Italy, built in the late 18th century. The existence of a church at this site has been documented as early as 1342, before the Venetians founded the city. (Jason Duhr/Stars and Stripes) 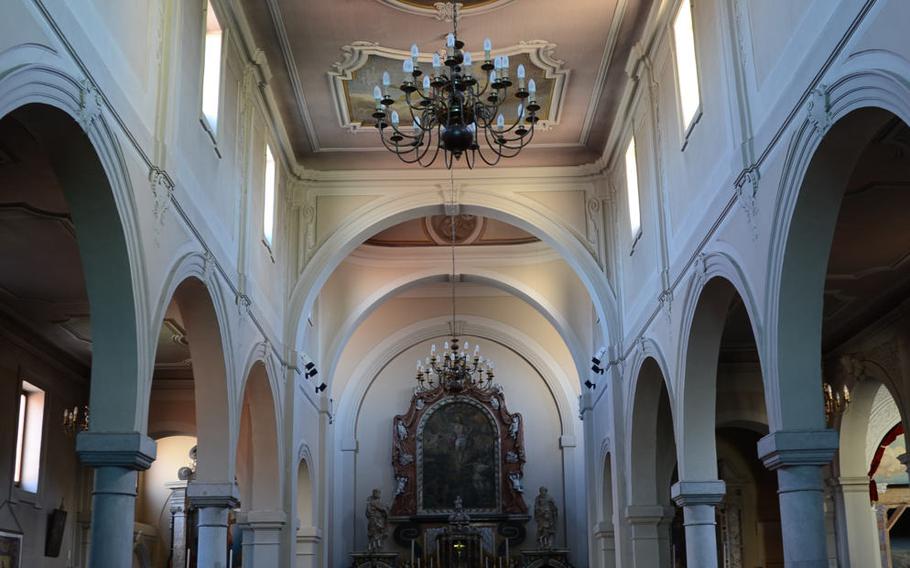 The Cathedral of Saints Peter and Paul, located in the old town of Gradisca d'Isonzo, Italy, boast paintings and beautifully crafted alters within its walls. (Jason Duhr/Stars and Stripes) The sun rises over one of the walking streets located in the old town of Gradisca d'Isonzo, Italy, where shops, restaurants and wines of the region can be found. (Jason Duhr/Stars and Stripes) 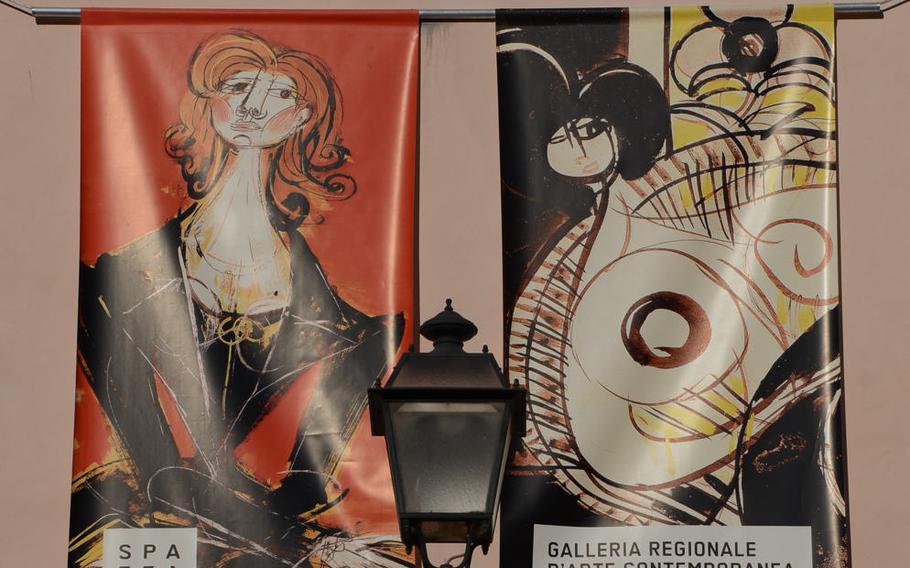 The Regional Gallery of Contemporary Art 'Luigi Spazzapan' offers a look at some of the works of Spazzapan, who was born in 1889 in Gradisca d'Isonzo, Italy, where the gallery is located. (Jason Duhr/Stars and Stripes) In mid-December Christmas decorations fill the streets and shop windows in the small city of Gradisca d'Isonzo, Italy, which is a little over an hour's drive from Aviano Air Base. (Jason Duhr/Stars and Stripes) 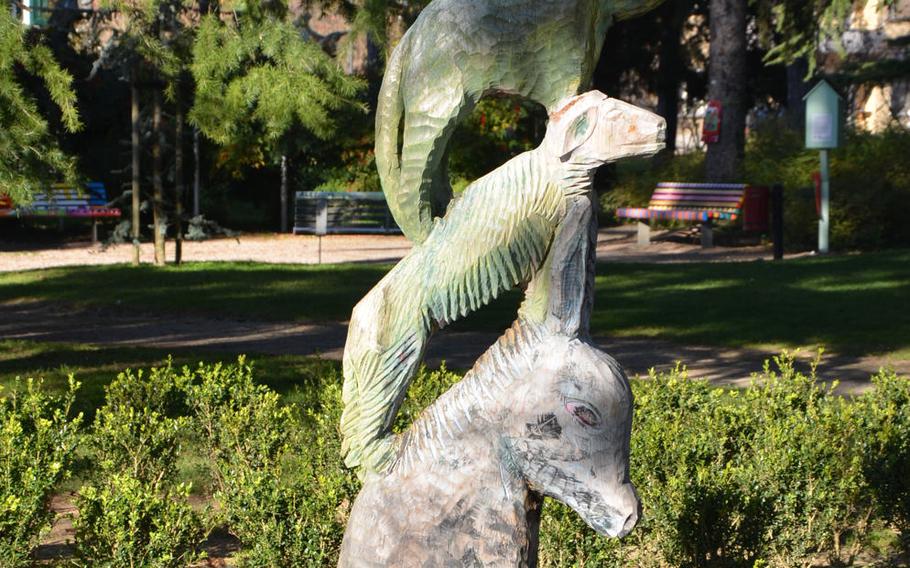 Pieces of art, such as this animal statue, line the parks and walking district in downtown Gradisca d'Isonzo, Italy. (Jason Duhr/Stars and Stripes)

Gradisca d’Isonzo, Italy, a small town not too far from Slovenia, midway between Gorizia and the Adriatic Sea, has a history that exceeds those boundaries.

The geographic location, intertwined with the neighboring cities and countries, defines the city’s name and offers insight into its history.

It was founded by Venetians in 1479, incorporating the word “grad” in its name, which in Slovene means town, while Gradisca comes from “gradisce” — a fortified place.

The downtown area best represents where the city’s name originated and what it stands for. It boasts a 60-foot-high wall, which towers over a nearby moat. A walk around the outer walls guides you to an unoccupied and degraded military structure known as Gradisca Castle, otherwise known as the Fortress of Gradisca d’Isonzo.

Before World War I, Gradisca was a major garrison town on the border between Italy and Austria-Hungary, and after WWII it was a significant Italian army base during a long-running border dispute with neighboring Yugoslavia.

While the locked iron gates keep you from entering the fortress overlooking the once walled city, the view is still astonishing.

The town has since expanded beyond the walls that once protected it and housed a large military presence, but it’s these inner streets that seem to have the most life.

Clothing stores, shoe shops, bars and restaurants fill the walking district in an area that was once occupied by soldiers.

While the area offers cultural highlights from the region, it also offers a colorful landscape of art.

A nearby park is dotted with sculptures and works of art, while buildings in the walking district display signs advertising a regional art gallery dedicated to a contemporary artist, Luigi Spazzapan, who was born in Gradisca in 1889. The gallery offers an exhibition dedicated to Spazzapan, as well as works from artists still creating contemporary art.

On a street parallel to the art gallery is the city’s history museum. Enjoy an exhibition dedicated to the construction and changes the fort underwent since being built in the 15th century.

While history, art, shopping and food stay connected in the walking district of Gradisca, the best stop for some might be Enoteca Rigionale La Serenissima, where one can sample some of the best full-bodied wines of the region.

A small sampling to wash down everything you’ve taken in or a few bottles to take home might leave you wanting to return to Gradisca d’Isonzo for another visit.

DIRECTIONS Gradisca d’ Isonzo is more than an hour’s drive east of Aviano Air Base. Follow A28 and A4E70 to the Villesse exit toward Slovenia. Take the exit toward Gradisca d’Isonzo.

Parking can be found around the city’s central park across from the old town and within areas of the city’s old town, which aren’t deemed pedestrian only.

FOOD Many eateries are around and within the old town.