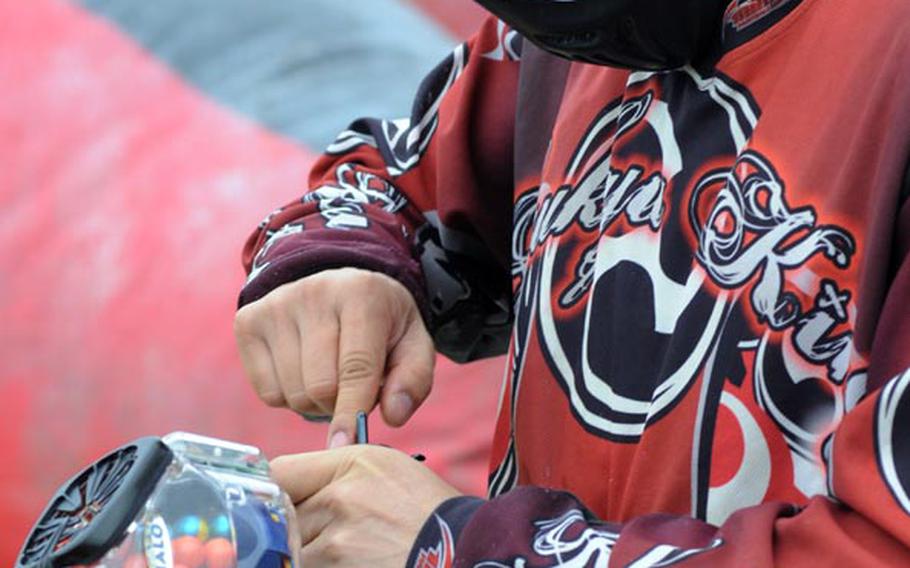 Buy Photo
A Ryukyu Kings player performs some quick maintenance on his paintball gun before heading into the paintball field on Kadena Air Base. The Ryukyu Kings were playing fast games, called speedball paintball, which last about two minutes, during the Feb. 25, 2012, session. (Matt Orr/Stars and Stripes)

Buy Photo
A Ryukyu Kings player performs some quick maintenance on his paintball gun before heading into the paintball field on Kadena Air Base. The Ryukyu Kings were playing fast games, called speedball paintball, which last about two minutes, during the Feb. 25, 2012, session. (Matt Orr/Stars and Stripes) 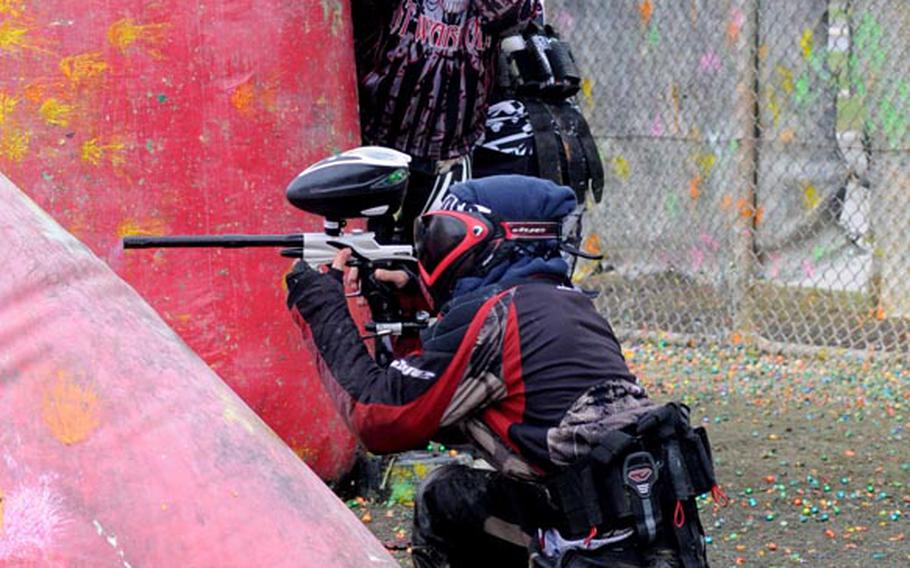 Buy Photo
Ryukyu Kings players use inflatable pylons to protect themselves during a game of paintball at the Kadena Air Base paintball field on Feb. 25, 2012. (Matt Orr/Stars and Stripes) 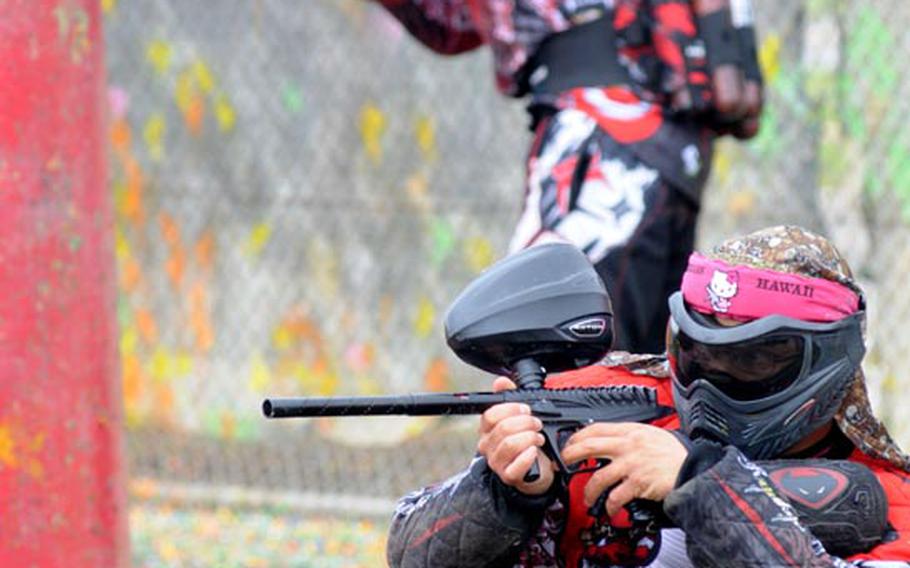 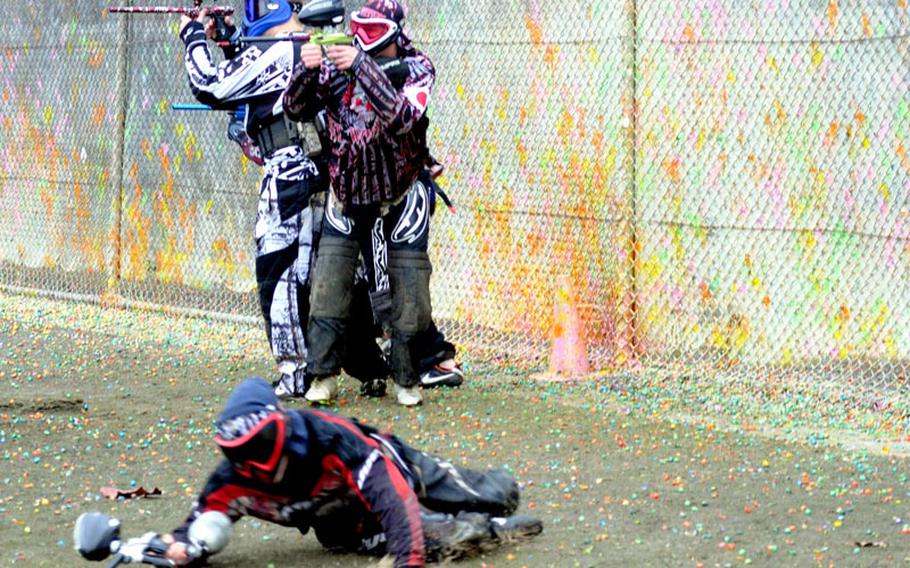 Buy Photo
Moments after the referee signals the beginning of a game of speedball paintball, a player races to some protective cover by sliding and staying close to the ground. His teammates provide cover by firing paintballs at the opposition. The Feb. 25, 2012, match at Kadena Air Base, Okinawa, was part of a training session for the Ryukyu Kings team. (Matt Orr/Stars and Stripes) 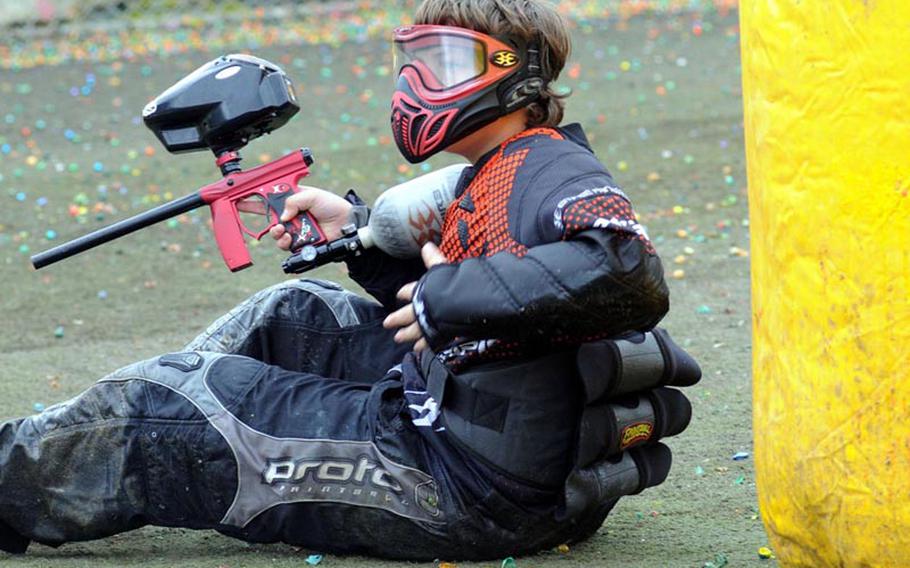 Buy Photo
A player checks himself over after being struck in the chest with a paintball round during a game Feb. 25, 2012, at Kadena Air Base, Okinawa. (Matt Orr/Stars and Stripes) 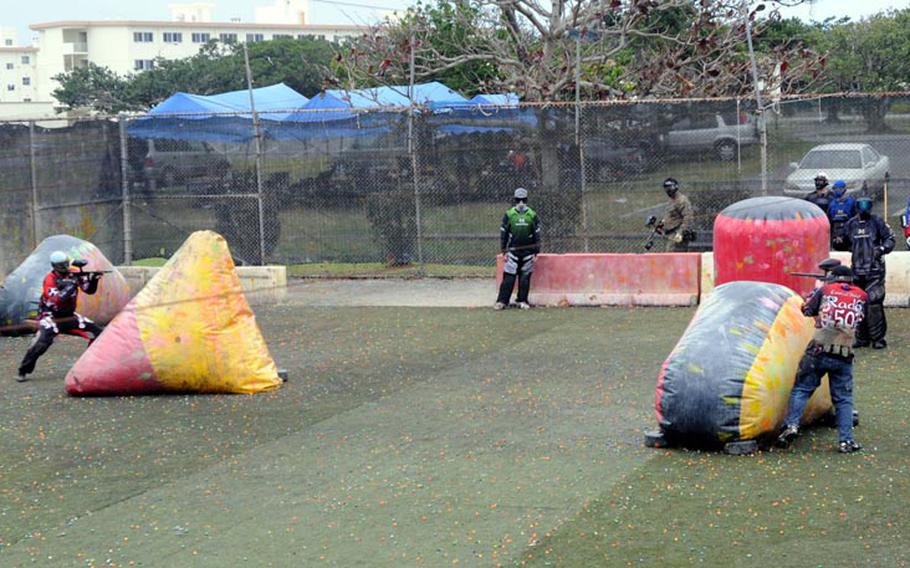 Buy Photo
The last two players in a game of speedball paintball battle it out behind inflatable pylons at the Kadena Air Base paintball field. The field gets a lot of use over the weekends, and the sport has grown in popularity over the past few years. (Matt Orr/Stars and Stripes) 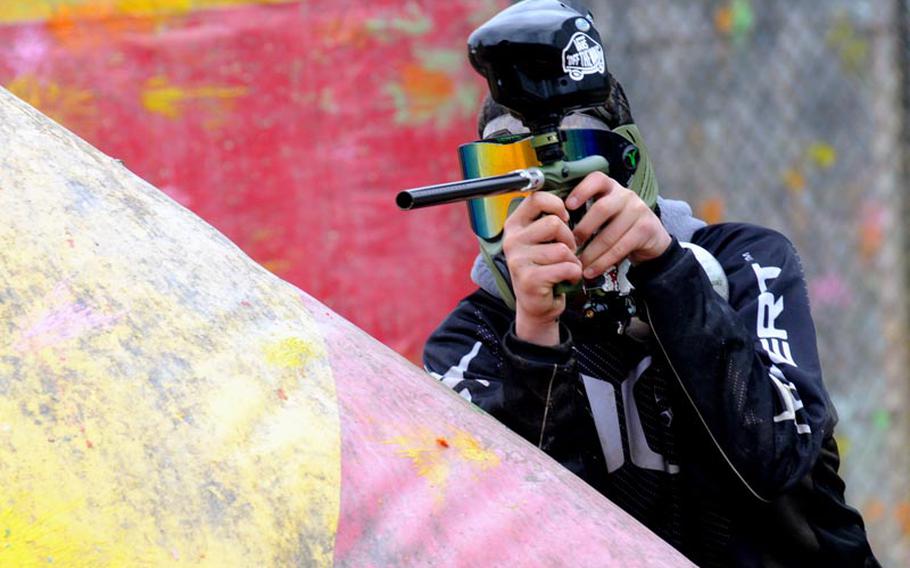 Buy Photo
A player takes aim at the opposing team during a Feb. 25, 2012, paintball match at Kadena Air Base, Okinawa. The Ryukyu Kings paintball team was training for a tournament in Thailand. (Matt Orr/Stars and Stripes) 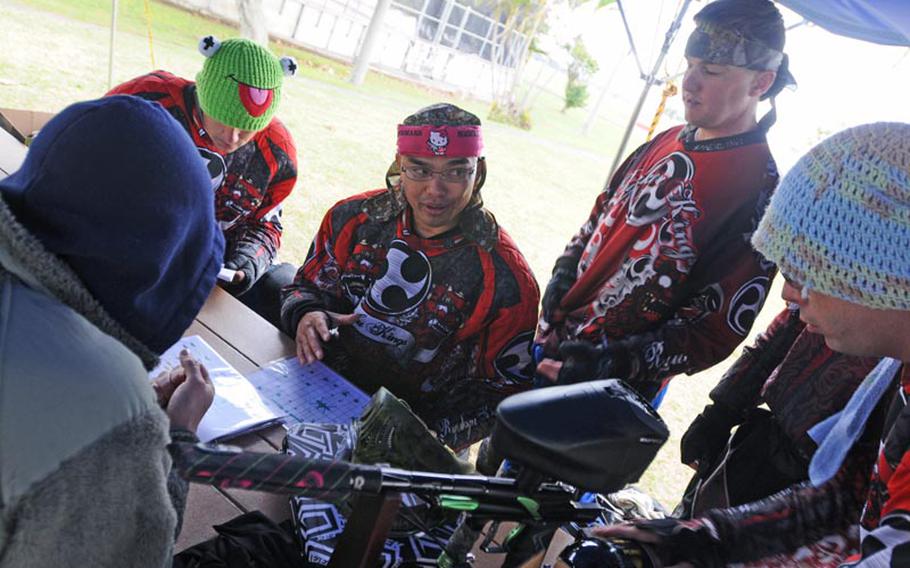 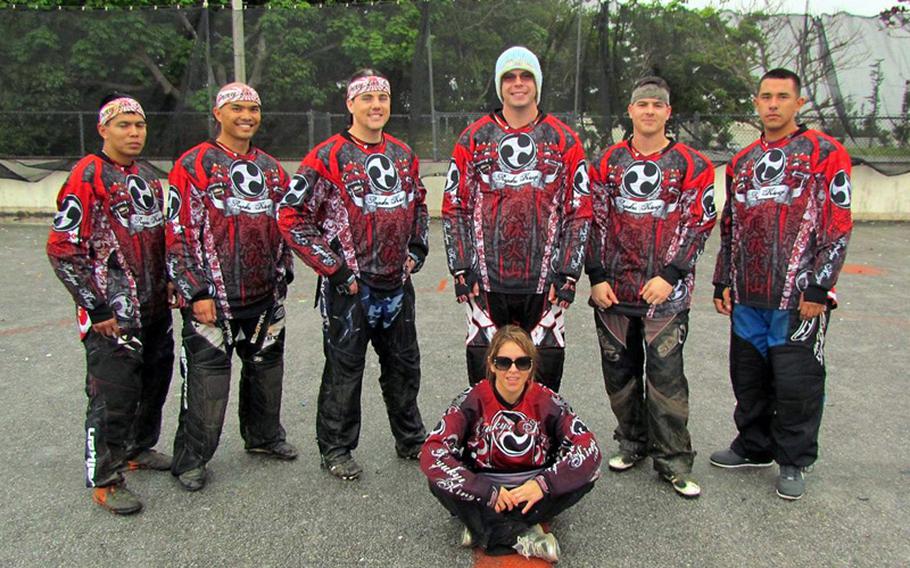 The Okinawa-based members of the Ryukyu Kings, from left: Eric Contreras, Conrad Bidal, Will Sides, Chris Gruber, Joe Freeman, Hector Lizama, Diana Cieslu. The team was joined by three players from mainland Japan for the Paintball Asia League Series March 2 to 4. They just missed making the semifinal round. (Courtesy of Ryukyu Kings )

At the referee&rsquo;s signal, players rush behind inflatable pylons while frantically squeezing off rounds from their guns, filling the air with brightly colored balls and a &ldquo;pop, pop, pop&rdquo; sound.

Teammates shout information to each other about where their opponents are hiding. A player races toward a concealed position, then leaps and slides into cover as he fires off rounds.

&ldquo;I&rsquo;m hit, I&rsquo;m hit,&rdquo; players announce, one by one, until there are only players from one side left standing.

The match has taken no more than two minutes, and in that time hundreds of small paintball rounds have been shot.

Every weekend, about 40 to 50 players converge on the paintball field on Kadena Air Base on Okinawa.

&ldquo;The sport is growing in leaps and bounds here on Okinawa,&rdquo; said Marine Corps Gunnery Sgt. Conrad Bidal, who has been playing since 1987. Bidal, captain of the Ryukyu Kings paintball team, said that when he got to Okinawa, maybe six to 10 people were playing.

This was the Kings&rsquo; last day of training before they competed in the Division 2 Paintball Asia League Series, held March 2-4 in Thailand.

Last year, the Ryukyu Kings took top honors in the tournament; this year, they made it to the quarterfinals but were just edged out of the semis.

The team has seven players from the Marine Corps, Army and Air Force who are based on Okinawa, and three Japanese citizens from the mainland. They come together two or three times a year to practice and meet up at tournaments.

Bidal, who has been on Okinawa for seven years, plays paintball as much as possible and has been actively furthering the popularity of the sport on the island.

&ldquo;I&rsquo;ve been playing since I was 14 years old,&rdquo; he said. &ldquo;I played one time and was hooked. My mom didn&rsquo;t want me playing, so I printed off some safety statistics to prove how safe the game is.&rdquo;

He loves the sport so much that he made sure there was a paintball field on Okinawa before he agreed to be stationed there.

The Kings took a weekend off after the Thailand tournament, but now they&rsquo;re back on the paintball field again to prepare for the Malaysia Open at Putra Jaya in May.

Kadena&rsquo;s Outdoor Recreation Center has paintball gear for hire, and they host speedball matches most Sundays. Call DSN 959-2811 or head over to Building 614, across from Risner Gym.