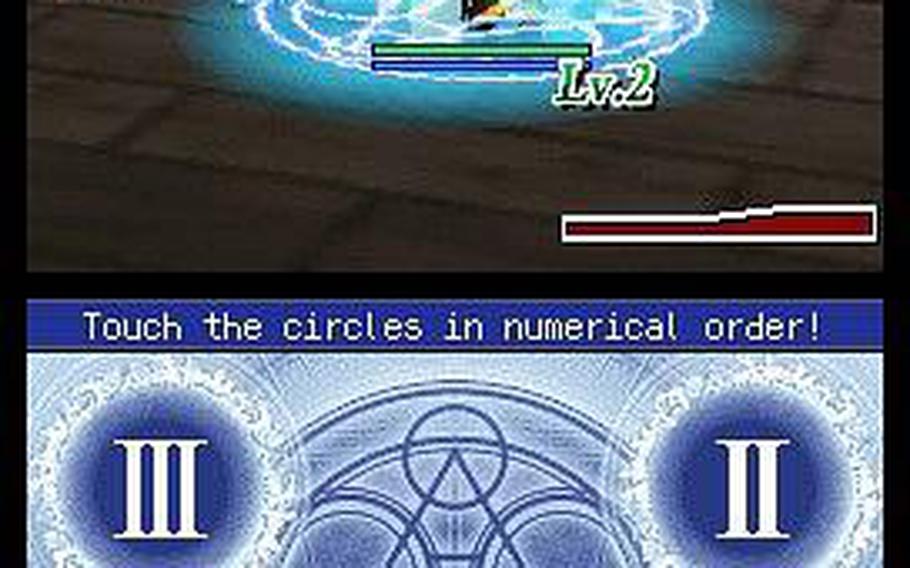 “Glory of Heracles” is a very average role-playing game for the Nintendo DS. (Games Press)

For most gamers, the combination of Greek mythology with a story-intense role playing game would seem like a slam dunk.

Unfortunately, “Glory of Heracles” does not capitalize on the vast library of epic Greek tales to enhance the story telling or game play.

Developed by Paon for the Nintendo DS, this E-rated game begins on the island of Crete with a hero who awakens only to discover that he’s lost his memory. The hero turns out to be Heracles. You might know him as Hercules. Heracles begins the game stricken with amnesia. After playing, most gamers are likely to wish for their own case of amnesia after throwing away hours playing this game.

Heracles meets other immortals who also have suffered memory loss. Facing a common predicament, these immortals travel to Mount Olympus to seek out answers as to why they have amnesia.

The game deals very little with actual Greek mythology, other than the names of some of the characters and some of the details relating to the characters’ history. This is one of the game’s major flaws. With plenty of great Greek dramas to choose from, it is perplexing that the game makers didn’t draw more on these stories. Instead, the tale they came up with is confusing and hard to follow at times.

Also the linear nature of the story line really limited a lot of the choices and opportunities to explore the world of the game. What the player is left with is a rather bland adventure.

Broken down, the game basically consists of moving Heracles and friends from point A to point B with a number of random battle encounters in dungeons, towns and forests. The random battle system is quite standard to this type of game. However, the frequency and repetitiveness can become very tiresome.

The controls of the game are pretty straightforward and easy to figure out. The game also offers a tutorial if needed. The use of a stylus is optional in the game, but at times seems really unnecessary to use with the standard control buttons. Sometimes it seems like games try to integrate the stylus just for the sake of having one, which is the case with “Heracles.”

The graphics bore mixed results. At times, the 3-D rendering of the towns and some of the animated scenes looked great. However, many of the characters seemed blotchy and showed little to no detail.

The game does offer some interesting new options. Players can enhance Hercules’ weapons and armor by visiting a blacksmith. The blacksmiths can re-forge weapons and armor with items players have collected to make them more powerful. They can also polish up rusty items found during your adventure. This adds a unique method to customizing the players in the game.

The game starts off well enough as the opening scenes get you excited. However, once you actually sit down and play for an extended period of time, you learn that this game really brings nothing new to the table. It isn’t a horrible game, but it isn’t very good either. With so many games out there, it seems hardly worth the time to put any effort into this one.