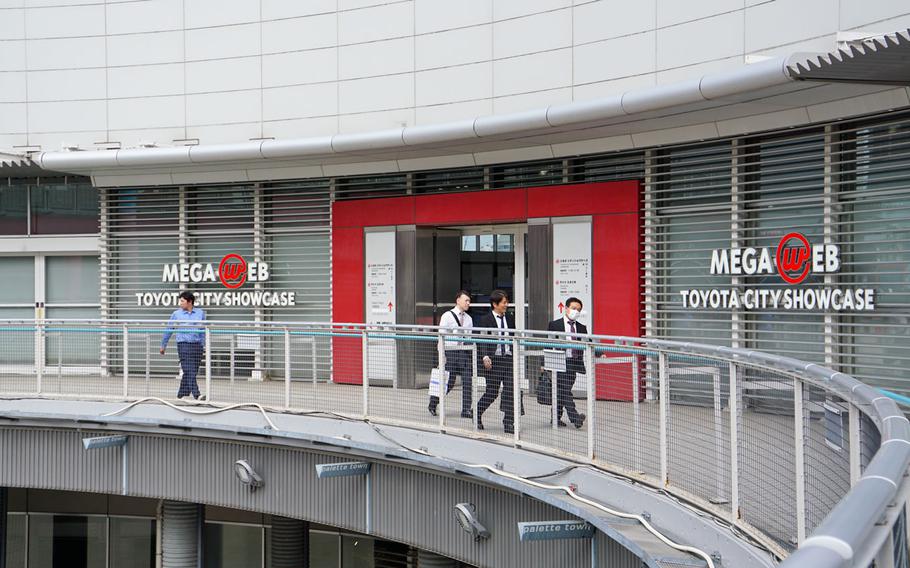 People stroll past the entrance to Mega Web, a Toyota theme park in the Odaiba district of Tokyo. (Leon Cook/Stars and Stripes)

People stroll past the entrance to Mega Web, a Toyota theme park in the Odaiba district of Tokyo. (Leon Cook/Stars and Stripes) 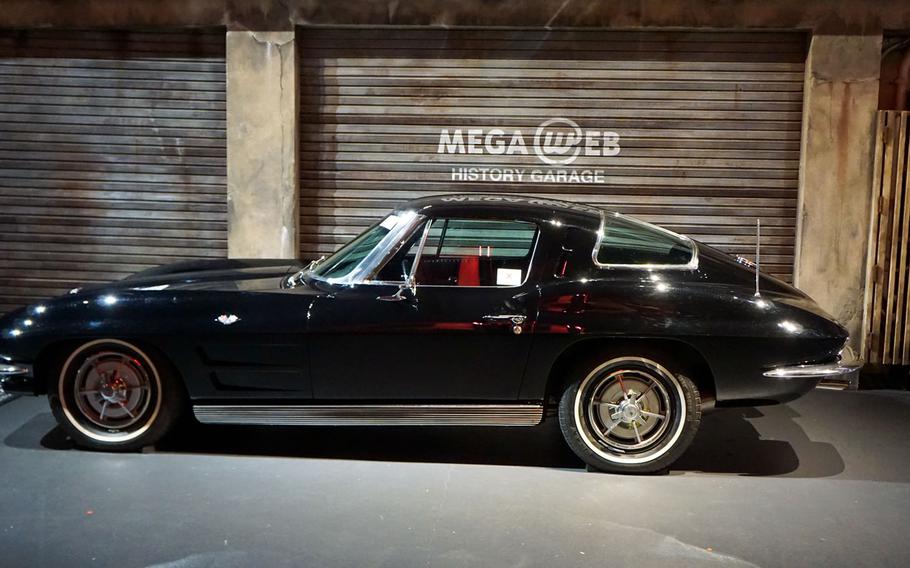 A 1963 Chevrolet Corvette Stingray, also known as the "plastic fantastic," is on display at the History Garage in Toyota's Mega Web theme park in Tokyo. (Leon Cook/Stars and Stripes) 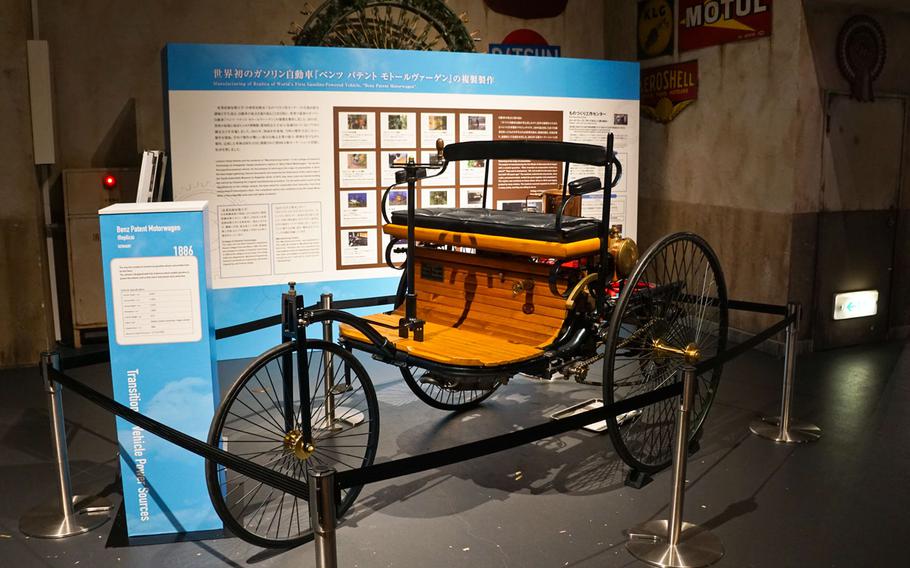 A functioning replica of a Benz Patent Motorwagen, which was invented in 1886 and is widely considered the first automobile, is on display at the History Garage in Toyota's Mega Web theme park in Tokyo. (Leon Cook/Stars and Stripes) 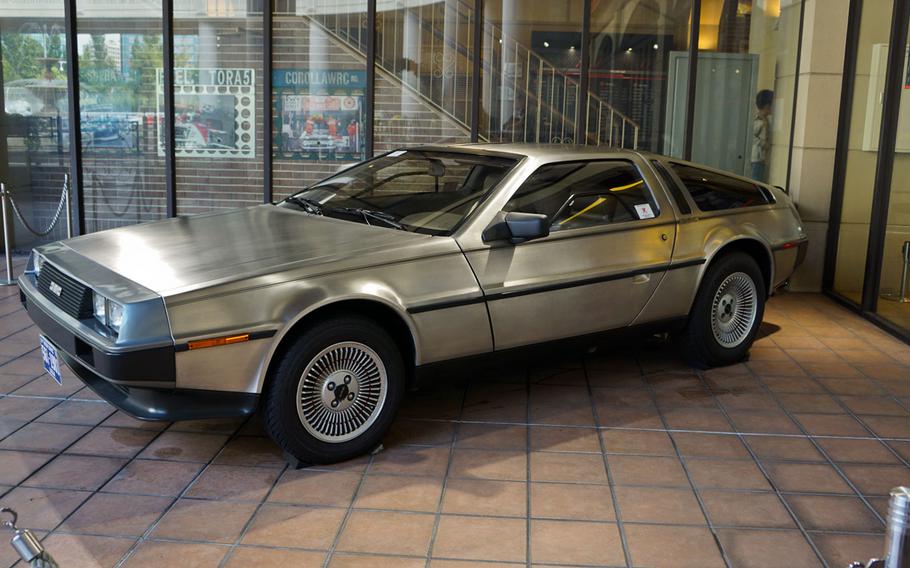 A Delorean DMC-12, best known for its use as a time machine in the "Back to the Future" movies, is on display at the History Garage in Toyota's Mega Web theme park in Tokyo. (Leon Cook/Stars and Stripes) 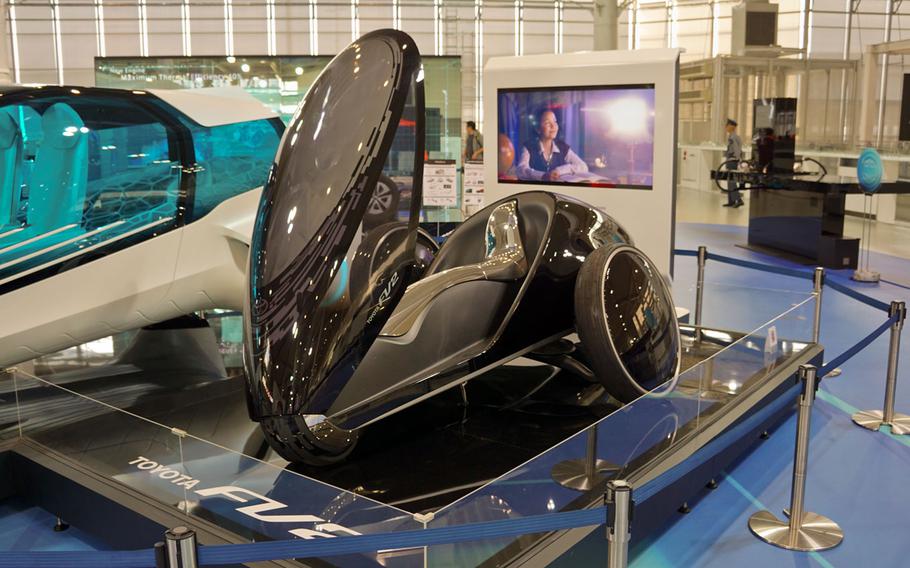 The egg-shaped, three-wheeled Toyota FV2 concept car, which has no steering wheel and is designed to steer by reacting to the driver's movements, is on display at the Toyota City Showcase at Toyota's Mega Web theme park in Tokyo. (Leon Cook/Stars and Stripes)

The park includes three facilities spread around the VenusFort mall: the Toyota City Showcase, the History Garage and the Ride Studio.

The first floor of the City Showcase is dominated by the showroom of newly released cars. It’s a hands-on area, so you can climb in and test the leg room if you want.

It includes the Mega Web Theater, a “motion simulator” theater that puts you in the driver’s seat of Toyota’s racing cars on courses across the world.

The second floor of the City Showcase is devoted to the Global Discovery Zone, which focuses on the future of driving. You can virtually test new automatic safety features, learn how to use a hydrogen fuel pump or just play “Gran Turismo 6.”

The main attractions for me were the concept cars. Some probably could be on the road tomorrow, while others were outlandish. One looked like an egg and had no visible means of steering.

Electronic information displays are multilingual, but they switched too quickly for me to read all at once, which was annoying.

The History Garage was my favorite part of Mega Web. It isn’t restricted to Toyota models and features historic cars from around the world. There’s a replica of the Benz Patent Motorwagen, widely considered the first car ever made, in 1886. If you’re lucky, you might even be able to see it in operation.

Other early cars include a Locomobile steam-powered car from 1899, a 1903 Cadillac Model A, and a 1913 Ford Model T Touring.

You can also see oddities such as a 1937 Buick converted to run on charcoal.

Another section of the garage displays classic cars from the 1950s and 1960s, including a 1959 Cadillac, a 1959 Chevrolet Impala and a 1963 Corvette Stingray, known as the “plastic fantastic.”

Not every car on display was a success. Several three-wheeled cars from the post-World War II era can be found in the courtyard. A DeLorean DMC-12 rounds out what I call the courtyard of failure.

The third part of Mega Web, the Ride Studio, advertises itself as a place where “everyone from children to a wide range of ages can experience the fun of driving and learn traffic rules.”

It’s an indoor and outdoor driving course with miniature cars for children to drive as well as a go-kart course. Some Japanese language skill is recommended.

Adults can also pay 300 yen to test drive a variety of Toyota cars. This is technically a part of the City Showcase and, as such, is designed to sell you a Toyota.

I’d never heard of paying for a test drive, but the lines I saw indicate people will do it in Japan.

Toyota’s Mega Web is located in and around VenusFort mall on Odaiba, next to Aomi Station on the Yurikamome Line. By car, take the Rainbow Bridge toll road and get off at Odaiba.

The Grease Cafe and Bar can be found inside the History Garage. The adjacent VenusFort mall offers abundant dining options.