Get in motion with Move, Kinect 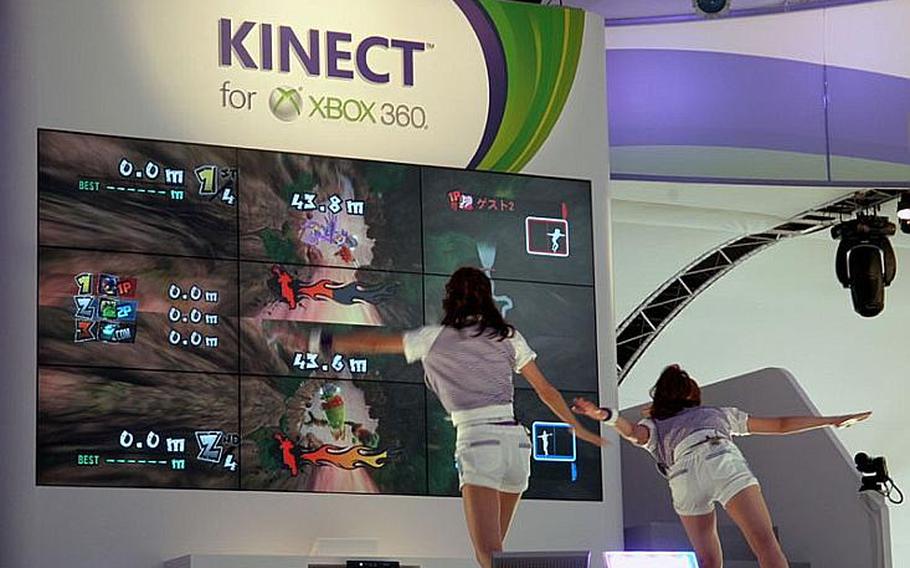 Buy Photo
Models demonstrate Microsoft's Kinect during the Tokyo Game Show held at Makuhari Messe. To be released in November, Kinect is a peripheral for Xbox 360 console that uses no controller but detects motion and spoken commands. (Hana Kusumoto/Stars and Stripes)

Buy Photo
Models demonstrate Microsoft's Kinect during the Tokyo Game Show held at Makuhari Messe. To be released in November, Kinect is a peripheral for Xbox 360 console that uses no controller but detects motion and spoken commands. (Hana Kusumoto/Stars and Stripes) 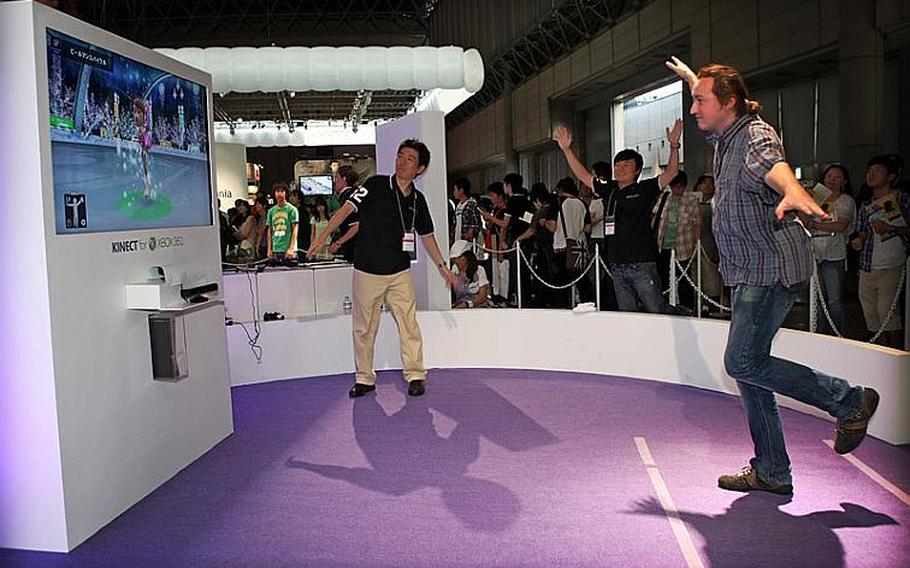 Buy Photo
A gamer tries his hand at figure skating with the X-Box 360 Kinect controller Saturday at the Tokyo Game Show 2010. (Grant Okubo/Stars and Stripes)

Stars and Stripes reporter Grant Okubo and checked out the two motion-based controllers coming out later this year. Here&rsquo;s his take:

Price: $49.99 for the basic Move controller, but also requires PlayStation Eye, which costs $40

The new Move is PlayStation&rsquo;s entry into the motion-based controller race. It uses a combination of a wand similar to Nintendo&rsquo;s Wii remote. The Move works by using the PlayStation Eye camera, which tracks the wand&rsquo;s position.

Naturally, the first thing I did was compare it to the Wii Remote. The overall feel of holding the controller is not that different. Ergonomically the Move&rsquo;s wand is a little more comfortable to hold. As I was playing a first-person shooter with the Move, I found firing a simulated rifle to be somewhat disorienting at first. Since I&rsquo;m used to taking aim with a regular controller, it took a little while to get used to aiming with the Move. Once I adjusted to it, I found that the new controller is very responsive and doesn&rsquo;t lag at all. The sensors tracking your movements are very accurate. It seems superior to Wii remote in every way. In addition, the game looks to be a huge step up for fans of motion control, who have only had graphically challenged Wii games to play. It&rsquo;s hands down the most accurate motion controller out there, and it doesn&rsquo;t hurt that it&rsquo;s $100 less than its nearest competitor. Sony may have just taken the lead in the motion controller wars.

Microsoft tosses its hat into the motion-control race by doing away with the controller all together. This controller-free technology is based on a web cam accessory for the Xbox 360, which allows users to interact with the game console without a controller. The Kinect uses cameras to read movements and gestures and a microphone to receive the player&rsquo;s spoken commands.

Standing in line for a good three hours to get a chance to try out the Kinect, I watched countless video of the upcoming titles for the Kinect. The overall idea behind the Kinect is amazing.

Standing in line I also watched those if front of me try out Kinect. I observed a few glitches. Whether it was the game or the new controller, I noticed the screen freeze up or players get stuck a few times. I also noticed those running the exhibit had to occasionally fiddle with white blank paper taped to the Kinect camera so players could be properly detected. So I had to wonder, is the white paper and tape included? When I finally got to play, I tried out the upcoming &ldquo;Sonic Free Riders.&rdquo; Like many of the Kinect games, it will have you out of breath and sweating, which for many of us isn&rsquo;t a bad thing.

It did take a lot more work to adjust to the sensitivity, or seemingly lack thereof, especially in menus.

On the bright side, taking away the controller really opens a huge window of possibilities of what can be done. With that said, there seems to be a lot of bugs that still need to be worked out until this new controller reaches the potential that many of us hope for.