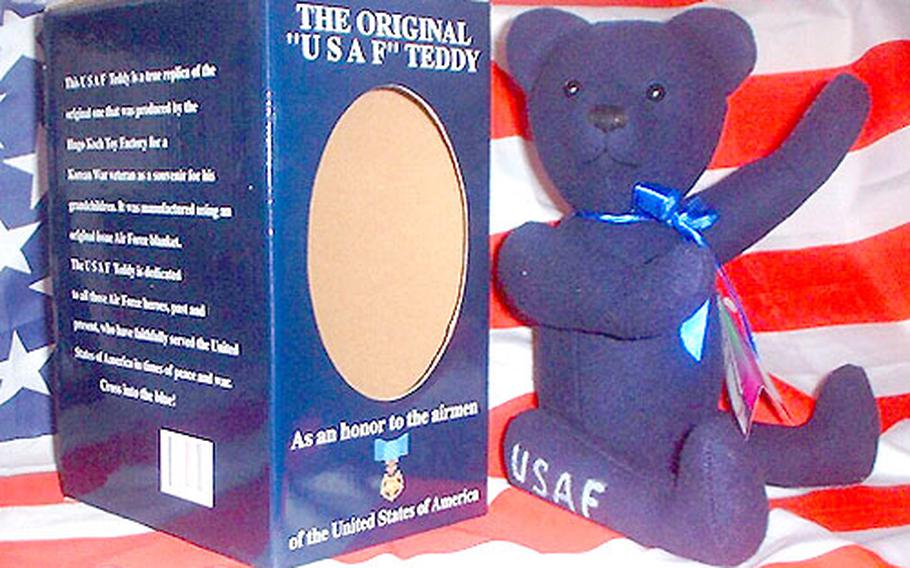 This U.S. Air Force bear should be available for purchase next month. (John Lewis / Special to S&S)

This U.S. Air Force bear should be available for purchase next month. (John Lewis / Special to S&S) 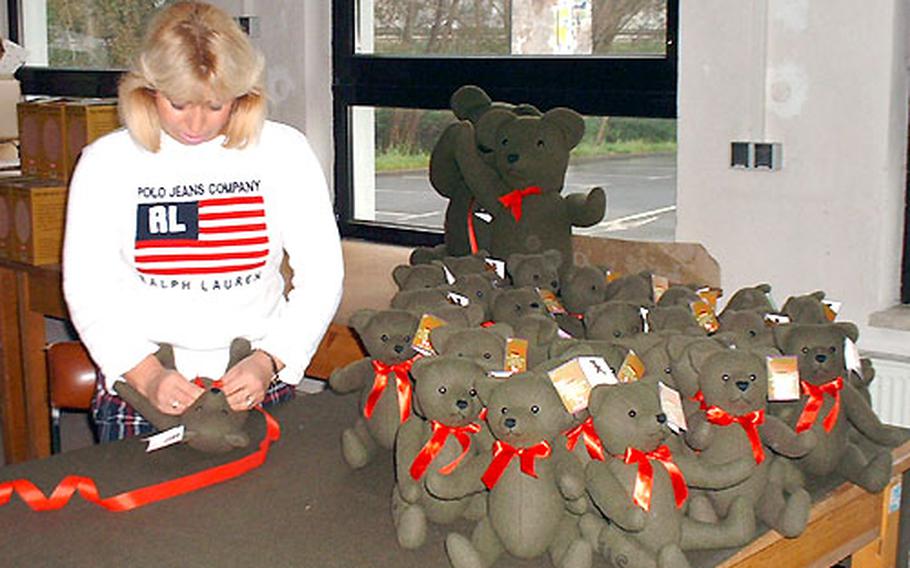 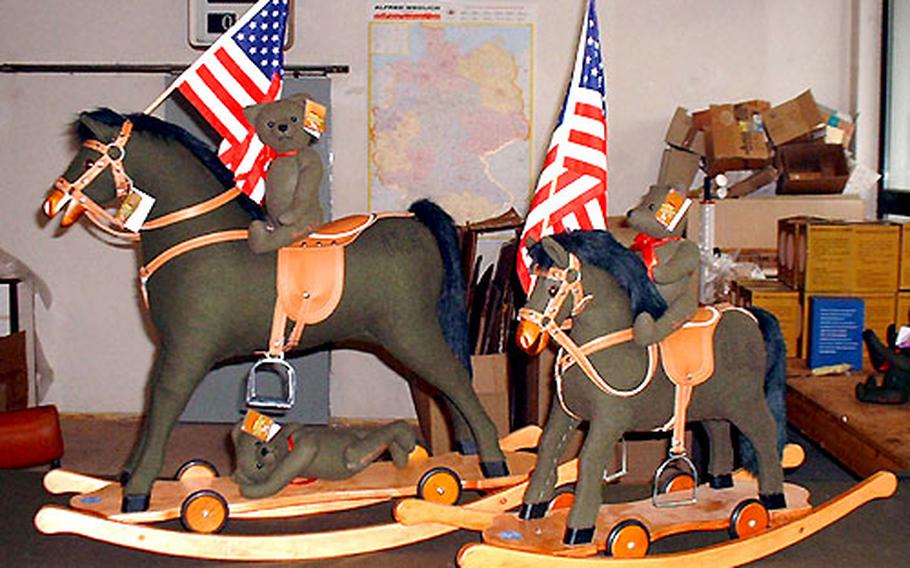 These rocking horses sold at the factory store are made from the same material as the G.I. Teddies. (John Lewis / Special to S&S) 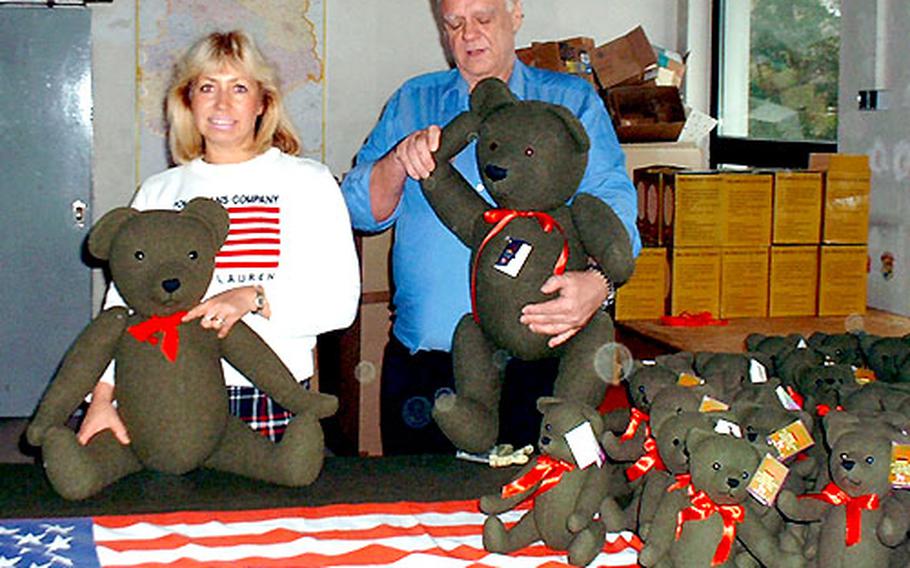 Evelyn (Koch) Geisbauer, the great-granddaughter of the company’s founder Marcus Koch and current owner of Hugo Koch Spielwarenfabrik, and her husband, Wolfgang, show off their limited-edition large G.I. Teddies. Only 50 of the large G.I. Teddies were produced. (John Lewis / Special to S&S) 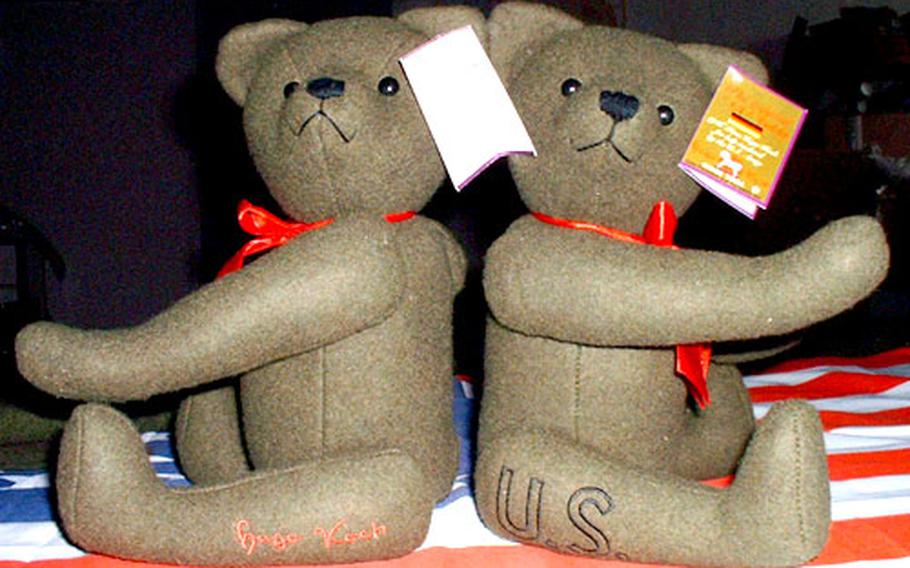 Nestled in the northern Bavarian town of Eschenbach in der Oberpfalz, Germany, and only four miles from the U.S. Army&#8217;s mammoth training area in Grafenw&#246;hr is a unique toy manufacturer by the name of Hugo Koch Spielwarenfabrik.

The Hugo Koch company has operated in Eschenbach i.d.O. since 1953. But what makes the company so unique is its history prior to 1953, and a teddy bear it produced for American soldiers during World War II.

I went to visit the current owners, Wolfgang and Evelyn Koch Geisbauer, to learn about the G.I. Teddy, but instead learned the entire history of the company.

Marcus Koch, Evelyn&#8217;s great-grandfather, founded the company in 1894 in the city of Steinach. At that time, the area surrounding Steinach flourished, due in large part to toy-making businesses operating there. Most of Koch&#8217;s business came from the production of wooden horses. As his business continued, he found it necessary to expand, and in 1902 he decided to set up operations in Wildstein, Czechoslovakia, near Plzen and the German border.

After completing all the necessary actions with the Czechoslovakian Department of Economic Affairs, Koch started the production of various high-quality toys in 1903 at his new factory.

That was also the year that he added teddy bears to his inventory. He displayed his wares at the international trade fairs in Leipzig, Germany, and Prague, and his business thrived. After his death in 1931, his son, Hugo, took over the business and successfully managed it in much the same way his father did.

As with the rest of Europe, World War II brought turmoil to Wildstein. The government of Czechoslovakia ordered all Germans out of the country in 1945. This included Hugo Koch and his employees. They were told they could take a suitcase and a maximum of 20 pounds of personal belongings. Everything else was to remain behind.

Luckily for Koch and others, the U.S. Army had advanced to Wildstein and was taking refugees across the border into Germany. Befriended by an American major, Koch was able to load the majority of his sewing machines onto Army trucks and had them transported into Germany. Many of the employees who had been with the business for years remained with him.

Upon fleeing to Pressath, Germany, Hugo immediately rented some rooms and once again began production. But he didn&#8217;t forget what the U.S. soldiers had done for him and his company. He wanted to repay them, but since he was starting anew he had nothing to give them. That is, until he saw the green blankets in the Army trucks.

The blankets were for refugees, and apparently were military surplus. In late 1945, when the blankets were no longer needed, he started cutting them up and making teddy bears out of them. He presented them to the soldiers in January 1946 as a heartfelt &#8220;thank you&#8221; for what they had done. The G.I. Teddy was born.

The Army major &#8212; according to the Geisbauers &#8212; informed Koch that one of the blankets had actually been used by Gen. George S. Patton who had a field office in the town of Weiden, not far from Pressath. While this rumor has never been confirmed, it adds to the bears&#8217; legend.

Since Koch&#8217;s equipment had been saved and the majority of his employees stayed with him, it didn&#8217;t take long for the company to recover. The founding of the international toy fair in Nuremberg added to the company&#8217;s re-establishment. Koch was one of the original founders of this fair, which still brings in thousands of international visitors and potential business deals today.

At the first fair in 1949, Hugo, along with his wife and son Bruno, set up his small display and hoped to make a few transactions. Much to their delight, several former business partners also attended the fair and placed new orders. His company was saved from financial ruin.

In 1953, the Koch family moved to Eschenbach i.d.O., where they built a house as well as a manufacturing building, which Wolfgang and Evelyn still use today. Hugo Koch prospered as he filled orders for companies in Germany, Switzerland and Lebanon.

However, in 1969, the business started to falter. Orders weren&#8217;t coming in as frequently, and the items being produced weren&#8217;t enough to cover the production costs. That same year, son Bruno took over the business, but the name of the company remained the same. Bruno and his wife survived the trying times and turned the company into a profitable one again with the introduction of new designs for plush toys.

The hard times weren&#8217;t over, though. Starting in 1980, cheap, mass-produced toys imported from the Far East started taking over the market. The local toy companies simply couldn&#8217;t compete with them.

At this point, the Koch company took another direction. It focused primarily on manufacturing specialty toys used by companies for promotional advertising. This included plush animals and a variety of wooden toys, the most popular being antique cars and trucks. It continues producing promotional items today.

The business changed owners once again in 1993 when Bruno&#8217;s daughter Evelyn took over. Realizing that their more expensive handmade toys couldn&#8217;t compete anymore with the cheaper imported ones, the company joined forces with a plush toy manufacturer in China in 1994. There, the Hugo Koch designs are made into high-quality toys.

In 1999, the company reclaimed some of its history. Once again, it produced an original G.I. Teddy and donated it to the Smithsonian Museum. The teddy is prominently displayed in the Political History Collection, alongside a letter of appreciation from the museum to the Geisbauers.

Keeping the military market in mind, replicas of the original G.I. Teddy started being manufactured in 2001. Until recently, these bears were sold only at Army and Air Force Exchange Service stores on U.S. military bases in Germany, but the Geisbauers said the bears are now sold at bases in Italy. The G.I. Teddy is also available at the company&#8217;s factory store along with many other types of plush toys.

During my visit, I got to see the newly arrived sample of an Air Force bear the company is thinking of producing. The bear is a replica of one made at the request of a Korean War veteran. Wolfgang Geisbauer had the company make his bear from an original Air Force blanket as a memento for his grandchildren. The bear should be available in April.

The Geisbauers said they would like to extend their thanks and gratitude to the thousands of American military personnel and family members who have visited their factory store over the decades. The family hopes their relationship with the military continues for a long time.

A selection of the company&#8217;s products can be seen at its Web site: www.hugokoch.de.