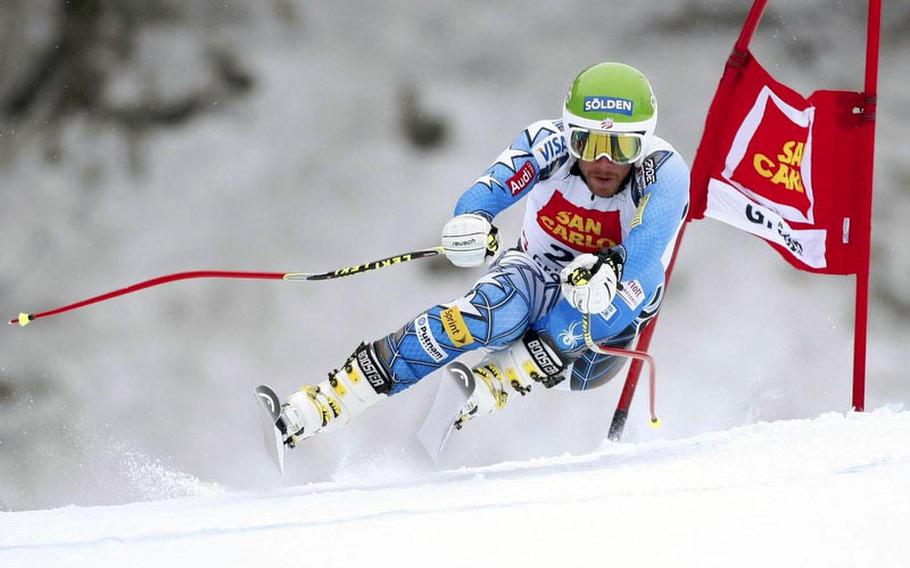 U.S. skier Bode Miller flies during the second downhill training run at the World Cup in Val Gardena, Italy, on Dec. 16-17. Miller has been atop the leader board in the downhill. (Courtesy of U.S. Ski Team)

U.S. skier Bode Miller flies during the second downhill training run at the World Cup in Val Gardena, Italy, on Dec. 16-17. Miller has been atop the leader board in the downhill. (Courtesy of U.S. Ski Team) 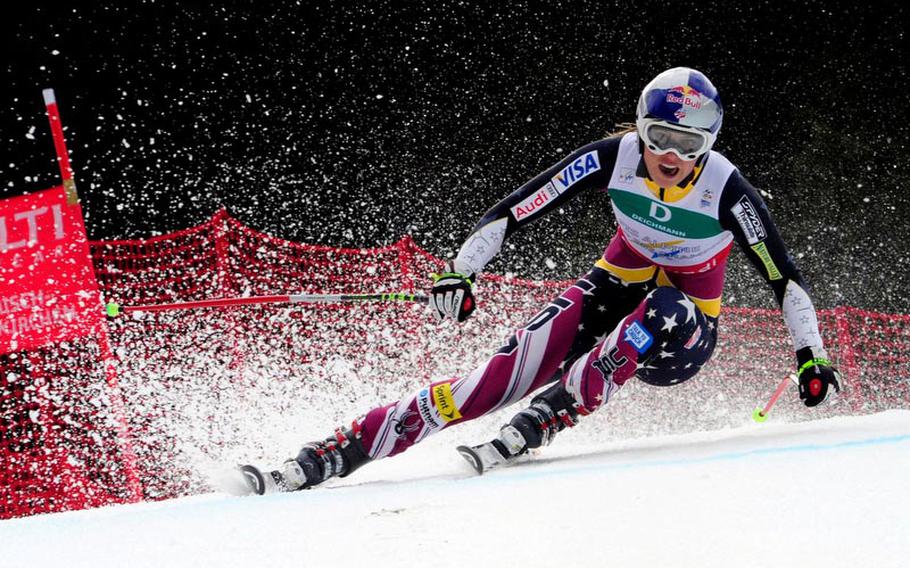 Snow flies as U.S. Ski Team member Lindsey Vonn races down the slopes at the World Cup competition in Garmisch-Partenkirchen, Germany, in 2011. Members of the U.S. women's team will visit Edelweiss Lodge and Resort in Garmisch to meet servicemembers and their families on Feb. 1. (Erich Spiess/Red Bull Content Pool) 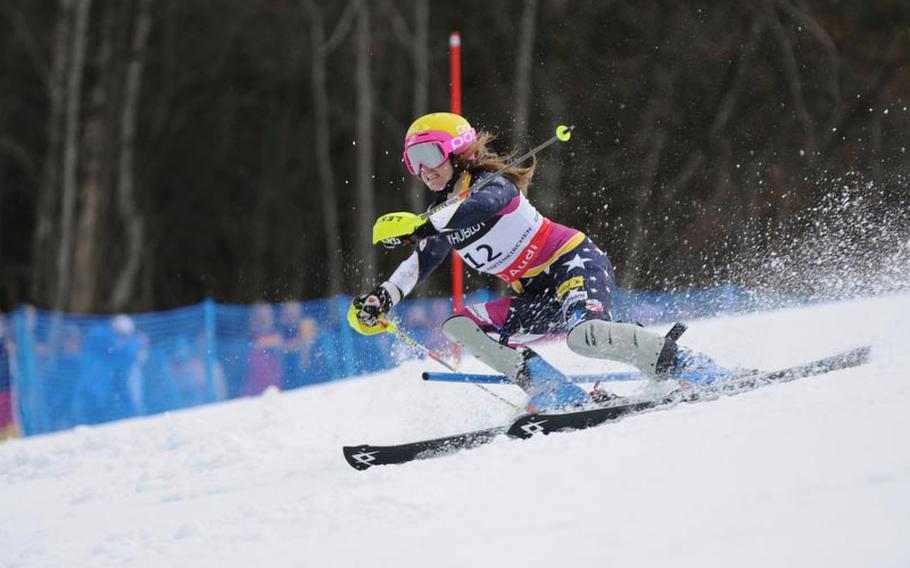 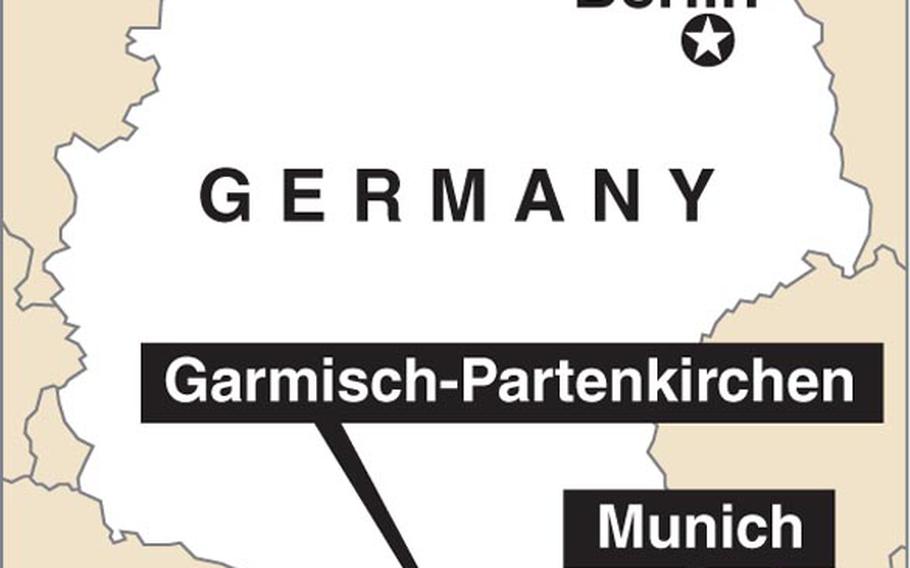 The world&rsquo;s premier ski circuit lands in Garmisch-Partenkirchen, Germany, this month for four days of competition, giving servicemembers an opportunity to see the sport&rsquo;s top international athletes in action.

The action unfolds on the doorstep of the U.S. garrison in Garmisch and its Edelweiss Lodge and Resort, a retreat for Department of Defense ID card holders. Brad Hays, a resort spokesman, said the ski course is some 500 meters from the resort.

The circuit opens for the men&rsquo;s downhill competition on Jan. 28 and the men&rsquo;s super giant slalom, or super-G, the following day. The women&rsquo;s team competes in both events on Feb. 4 and 5.

The women&rsquo;s team will visit Edelweiss to meet servicemembers on Feb. 1, a tradition Hays calls a highlight of the resort&rsquo;s winter season.

Doug Haney, a spokesman for the U.S. Ski and Snowboard Association, said the U.S. presence is part of what makes the city and course a special stop for the team.

&ldquo;That&rsquo;s always a big part of coming to Garmisch,&rdquo; he said. &ldquo;The fact that the base is there gives us that home team edge, which is cool.&rdquo;

The World Cup circuit touts some of the best skiers in the world, Haney said, many of them Olympic medalists.

In competitions stretched across the winter, the athletes tackle Europe&rsquo;s best slopes to dominate events such as slalom, downhill and the super-G.The U.S. team is off to a good start this season with multiple podium finishes. As of Jan. 12, Lindsey Vonn sat atop the women&rsquo;s overall leader board and was leading in the downhill and super-G events. Julie Mancuso was in seventh place overall. On the men&rsquo;s side, Ted Ligety sat in first place in the giant slalom and fourth place overall, as of Jan. 12, while Bode Miller was atop the leader board in the downhill. Miller was in sixth place overall. European skiers offer strong competition. Austria&rsquo;s Marlies Schild has dominated the slalom. Garmisch&rsquo;s own Maria Riesch, winner of last year&rsquo;s women&rsquo;s World Cup title, was in eighth place overall as of Jan. 12. The Garmisch races also mark professionals&rsquo; first return to the slopes after the city hosted last year&rsquo;s biennial Alpine World Ski Championships. &ldquo;There&rsquo;s any number of different stories and scenarios that are playing out right now,&rdquo; Haney said. &ldquo;As we get closer to Garmisch, I&rsquo;m sure those will be even hotter.&rdquo; Atmosphere is another reason to attend the World Cup, Haney and Hays say. Ski competitions attract rowdy fans bearing flags, cowbells and a deep national pride. Celebrations extend beyond the event and into the night.&ldquo;Ski racing is as much sporting event as a cultural event, and I think that&rsquo;s what&rsquo;s unique about it,&rdquo; said Haney.

Know & GoSpectators have several options for viewing the races. They can don skis and buy a lift ticket for nearby slopes, from which they can watch the event, or they can buy a ticket for the grandstand area. Tickets are sold online at: skiclub-garmisch.de or at the base of the Kandahar run. Prices range from 20 euros to 38 euros for adults; children under 7 years are admitted free. Hays noted that Edelweiss has limited room availability during the World Cup. He suggested that anyone wishing to make reservations should call the lodge&rsquo;s Vacation Planning Center. Rooms can be booked by calling (+49) (0) 8821-9440. More information about Edelweiss can be found at edelweisslodgeandresort.com. Learn more about the skiers and the competition at www.fisalpine.com.