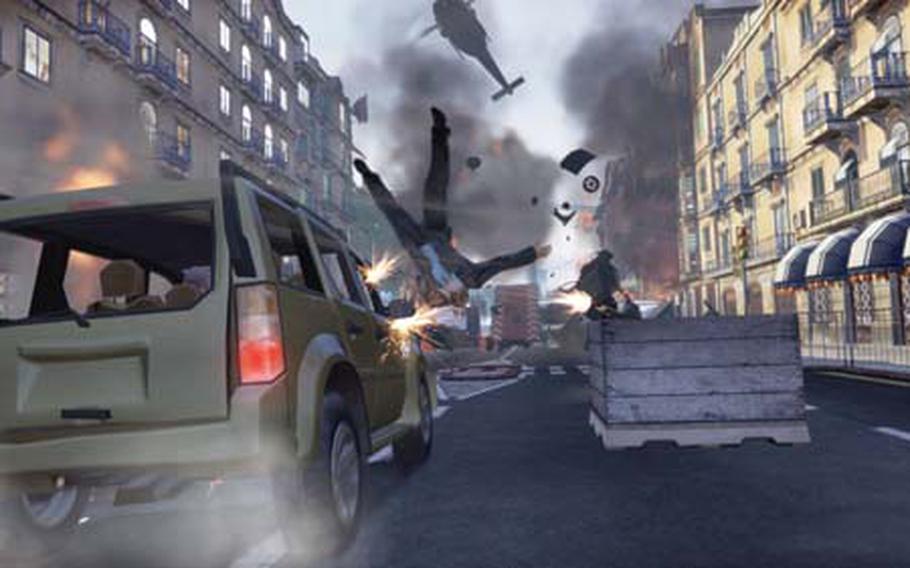 The action gets a bit wild at times on the streets of Barcelona, Spain, in “Vin Diesel Wheelman.” (Ubisoft)

You don&#8217;t have to wait for "Fast & Furious" to arrive at your base theater to catch Vin Diesel&#8217;s daredevil driving.

The T-rated game from Midway and Ubisoft features Diesel portraying Milo Burik, an agent sent to infiltrate the multifaceted underworld in Barcelona, Spain.

You play as Milo. As is usual in these types of tales, you&#8217;re deep undercover so even the local cops are unaware of your true identity and mission. That gives you the excuse to plow through dozens of roadblocks and run scores of police cars off the road. It also apparently gives you license to ram hundreds of civilian vehicles, menace pedestrians and smash sidewalk stalls with virtual impunity. Of course none of this really makes any sense for a lawman, so you&#8217;ll just have to put your brain in neutral if you want to enjoy the ride.

The game plays a lot like a lightweight combination of "Grand Theft Auto" and "Need for Speed: Undercover." You&#8217;ll spend a lot of time running errands for various shady characters while trying to build your street cred with the city&#8217;s three rival gangs. You&#8217;ll be asked to hunt down specific people, steal vehicles, compete in street showdowns and deliver packages. These missions usually involve a good deal of driving, but you also get to stretch your legs a bit and exchange gunfire with gangsters. Unfortunately, the missions start feeling very similar after a few times around the block.

You keep track of your primary and side missions by using a PDA. This feature also allows you to skip much of the inconsequential driving and head right to the next job.

But you&#8217;ll still need to be prepared for a good deal of automotive jousting. That&#8217;s best handled by a slight bump on the right joystick, which activates a "combat move" that&#8217;s likely to send your opponent skidding into a building.

The damage you leave in your wake can look quite impressive. Of course no one seems to get injured, even when they&#8217;re sent flying from an exploding car. It is a T-rated game after all.

This sort of thing will eventually put a few dings in your car &#8212; or, more likely, mash it into a heap of twisted metal. If that happens, you can simply "airjack" another one. This basically involves leaping from your smoking wreck onto another vehicle, climbing in the window and kicking the driver out the door. Sure it&#8217;s unrealistic, but it looks cool &#8212; and it&#8217;s handled with a press of a button.

The steering controls are very forgiving. This isn&#8217;t a driving simulation. Rather, it&#8217;s an adventure game that happens to require a lot of driving. As a result, there are lots of cool-looking stunts and wild action that don&#8217;t require a lot of skill to pull off. That&#8217;s a welcome change from the many driving games that demand virtual perfection before letting you pass even low-level challenges.

The graphics are OK. The Barcelona cityscape offers plenty of detail. The cars are a mixed bag, with some well rendered and others looking a bit blocky. The character renderings suffer from the same uneven treatment. Primary characters are usually good, but generic cops and pedestrians don&#8217;t come off as well.

In the end, "Wheelman" probably won&#8217;t satisfy my friend "Doug the Thug," who&#8217;s looking for a gritty crime drama. However, those looking for light, accessible, over-the-top fun can slide behind the wheel with Vin.