From eggnog to bacon to toys, German farmers have it all in vending machines 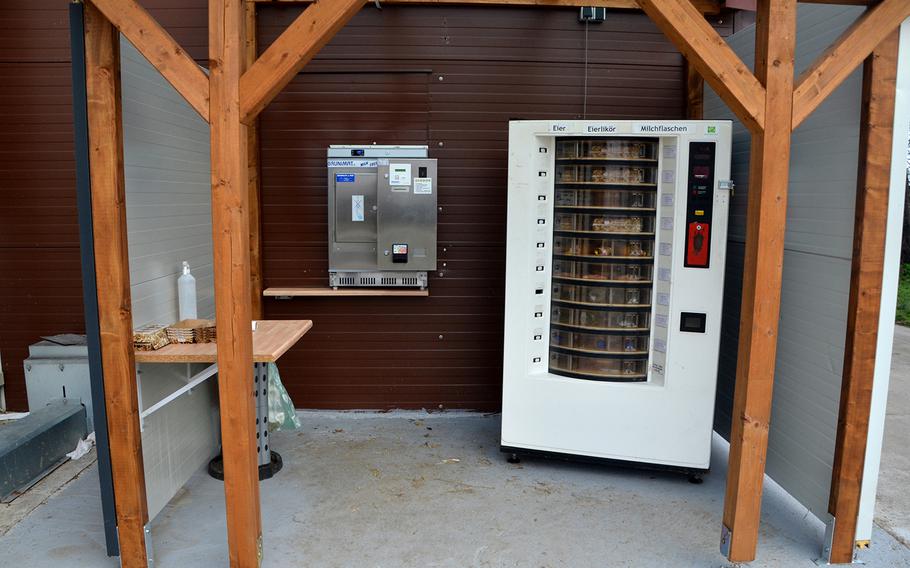 Buy Photo
The vending machine at Bauernhof Kief in Hockenheim, Germany, with a fresh milk dispenser to the left, on Nov. 30, 2020. Vending machines aren't the most picturesque places to pick up food and drink, but they are open 24/7, every day of the year, including during the coronavirus pandemic, on German holidays and Sundays. (Karin Zeitvogel/Stars and Stripes)

Buy Photo
The vending machine at Bauernhof Kief in Hockenheim, Germany, with a fresh milk dispenser to the left, on Nov. 30, 2020. Vending machines aren't the most picturesque places to pick up food and drink, but they are open 24/7, every day of the year, including during the coronavirus pandemic, on German holidays and Sundays. (Karin Zeitvogel/Stars and Stripes) 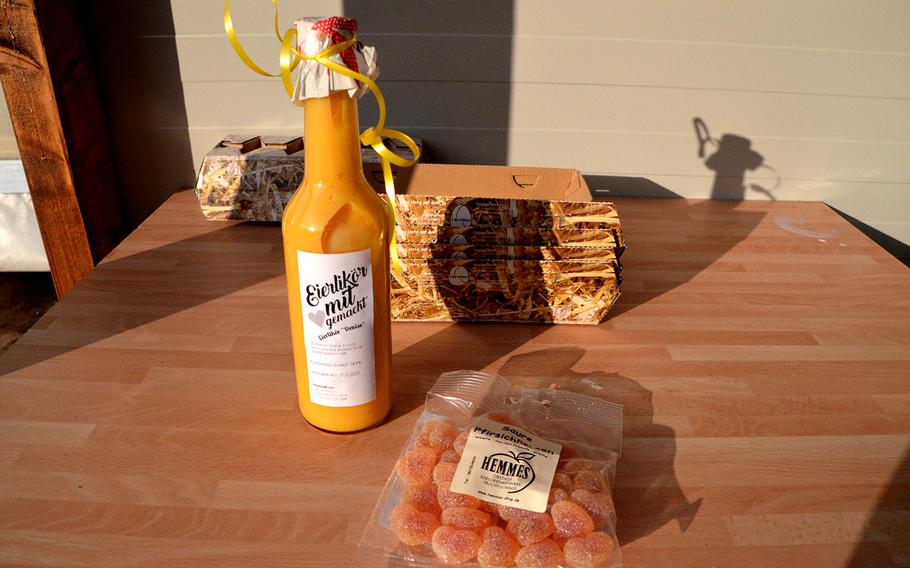 Buy Photo
Eggnog and peach gummy candies sit in front of empty egg cartons on a small table near the vending machine at the Kief farm in Hockenheim, Germany, on Nov. 30, 2020. The machine sells only a few products but they are all-natural and of high quality. (Karin Zeitvogel/Stars and Stripes) 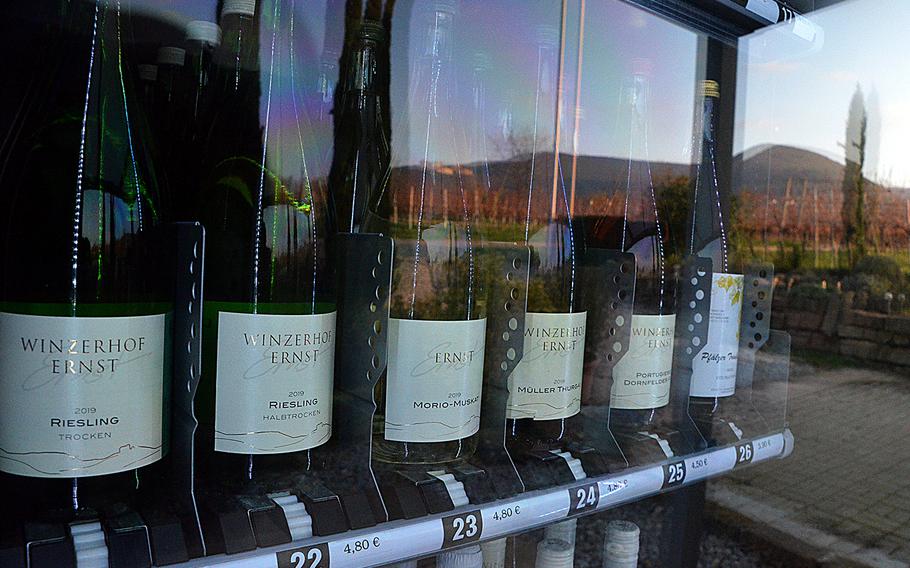 Buy Photo
Vineyards and an ancient cloister are reflected in the glass of the wine vending machine at Winzerhof Ernst in Maikammer, Germany, on Nov. 30, 2020. The vending machine sells a selection of reds, whites and roses, along with grape juice, water and glasses to drink them from. (Karin Zeitvogel/Stars and Stripes) 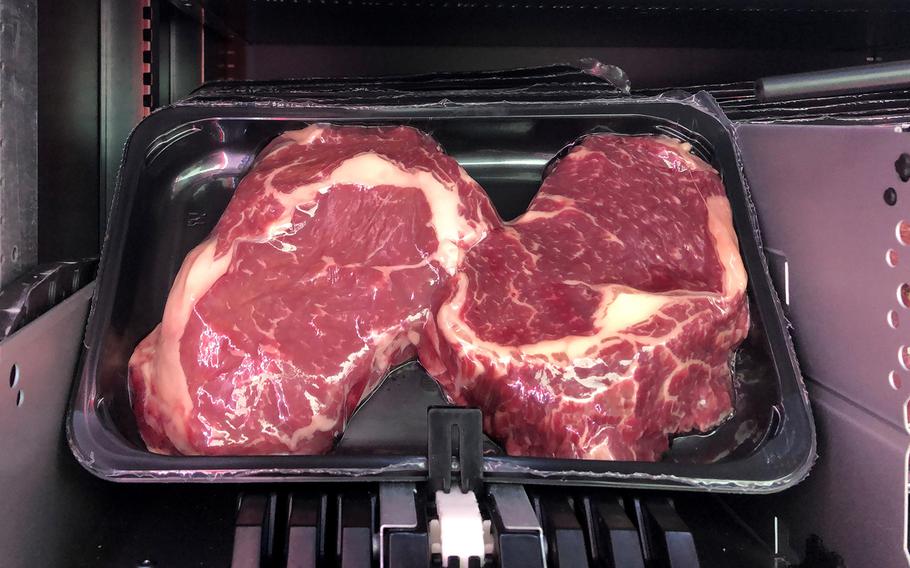 Buy Photo
Thick cuts of beef wait inside one of the temperature-controlled vending machines outside the Zemo butcher shop in Weilerbach, Germany, on Thanksgiving Day for a purchaser. Zemo has a wide variety of products in its vending machines, which are open for business 24 hours a day, seven days a week. (Karin Zeitvogel/Stars and Stripes) 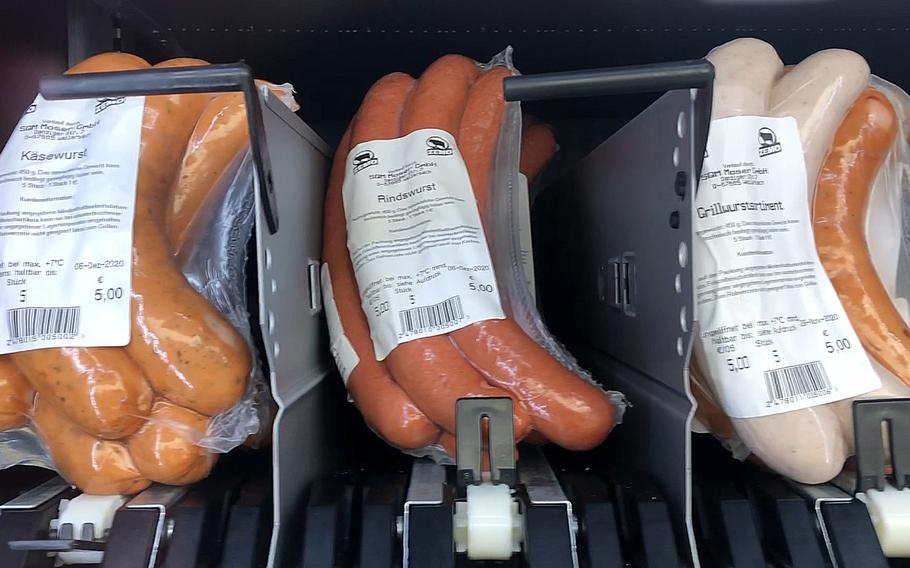 If you run out of milk, eggs or — shudder — wine on Christmas Eve when the shops shut early and the mother-in-law is arriving, and Amazon still hasn’t delivered that special present you got her, no worries: There are self-service vending machines around Kaiserslautern, Wiesbaden and Stuttgart that can help you out.

The ambiance at the machines might not come close to a festive dinner in a restaurant or shopping in a country market, but many are in settings that are well worth the trip. They’re also open 24/7, 365 days a year, despite the pandemic, unpredictable German business hours, and those holidays that sometimes creep up on you unnoticed.

Go prepared to make the most of your trip. Arm yourself with lots of change before hitting up the vending machines at the Kief family farm in Hockenheim for some of their homemade eierlikoer (alcoholic eggnog) or peach gummies; or the Guhl farm in Gerhardsbrunn, a 17-minute drive from Ramstein, for dairy and farm produce.

Head to Zemo in Weilerbach if you run out of meat. And if you’re headed to the wine vending machine at Winzerhof Ernst in Maikammer, you’ll need a German ID card to prove you’re of drinking age and a contactless credit card. But the vintner will help you out if you have neither.

Zemo, Danziger Strasse 7, WeilerbachA row of nondescript vending machines outside a butcher’s store in Weilerbach offers cuts of meat — rumpsteak, ribeye and sirloin along with ribs, bacon or stewing beef, to name a few.

They also have all kinds of wurst, Heinz baked beans, condiments such as horseradish, raclette cheese, eggs, vacuum-sealed corn on the cob, even toys. My American credit card didn’t work, so I plugged in coins to buy half a dozen eggs and selected the last remaining carton. A little wheel turned, trying to bring the carton to the front of the row it was in, from where it would drop about two feet into a tray below. It would have been interesting to see if the eggs survived the drop, but the little wheel failed to achieve its goal and they remained teetering on the edge. The machine gave me my money back and when I tried again, it told me eggs were sold out.

Bauernhof Guhl, Adam-Mueller-Strasse 11, GerhardsbrunnTwo sculptures of cows indicate you’ve arrived at the Guhl farm in the village of Gerhardsbrunn, 19 minutes south of Ramstein Air Base and 30 minutes west of Kaiserslautern.

There was a short line to use the self-service milk dispenser and vending machines when I went on Thanksgiving Day. I bought gluten-free granola, and the eggs I couldn’t get at Zemo from the vending machines, which don’t drop purchases from a height — you open a sliding door and take them. I also bought a reusable glass bottle for 1.50 euros to fill up with raw milk, which the Germans who were there said they drink without boiling first, despite the admonishment on the machine.

Pros: Great setting, delicious milk for 1 euro per liter, good selection of farm-fresh produce. There are instructions in English on the vending machines and dispenser, both of which were easy to use and give change. You can bring your own bottle to fill with milk or buy one there.Cons: Cash only.

Bauernhof Kief, Seewaldsiedlung 6, HockenheimYou know you’re at a working farm when you step out of the car after driving down a narrow country road and get a whiff of cow dung.

To the left and right of where the Kief farm’s solitary vending machine is, dozens of cows were eating while a cat hunted for rodents in the fields. The vending machine sells plastic bottles for milk — for use in the milk dispenser next to it — cartons of 10 free-range eggs, peach gummies and, the piece de resistance, homemade eierlikoer. The green light that indicates the machine is on wasn’t lit, but after fretting for a moment that I’d made the hour’s drive from Kaiserslautern for naught, I plugged in money and got the best-tasting gummies I’ve ever had and a bottle of eierlikoer, made from egg yolk, sugar, vodka and condensed milk.

A German couple showed up while I was there to buy a second bottle of eierlikoer for themselves — it’s that good, they said.

Pros: High-quality, additive-free products and the setting — country air does a world of good, and there are plenty of trails to explore nearby. The owners are very responsive on Facebook and will tell you what’s in the vending machine. Cons: They sometimes run out of eierlikoer. The vending machine only takes coins.

Winzerhof Ernst, Hohlweg 3, MaikammerThe vending machine is hidden around the back of this winery, off a “wine education trail.”

It contained more than a dozen reds, whites and roses, mostly locally produced, plus juice, water and glasses to drink from. You have to swipe an ID to allow the vending machine to check that you’re old enough to drink, but only German IDs and contactless credit cards are accepted, and I had neither. A German man scanned his ID for me and then used his credit card to allow me to buy a bottle of grauburgunder, the German equivalent of pinot grigio, and I gave him cash. The vintner, whom I contacted on Facebook to try to fix this problem for the thousands of Americans in the region, replied, “Please ring the bell next time. We’ll find a solution.”