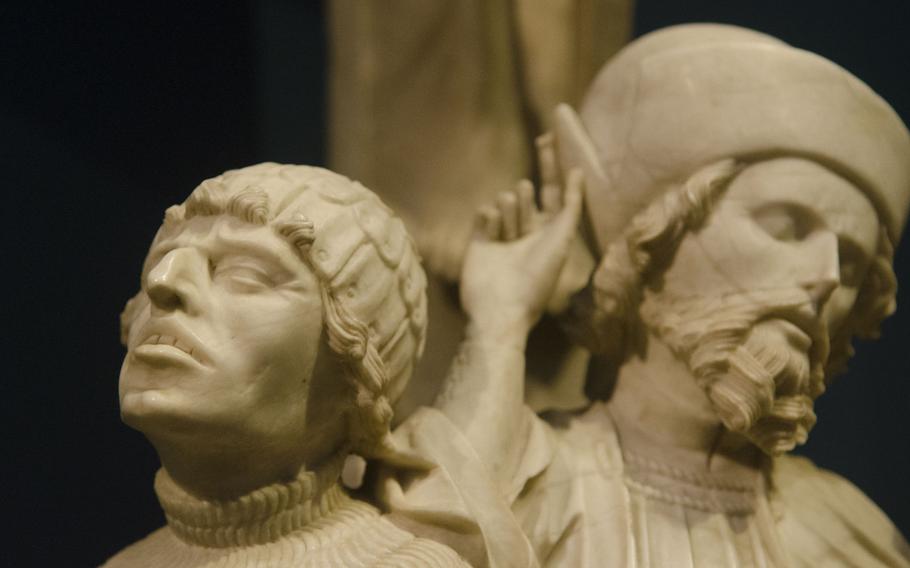 A detail from a group of alabaster sculptures from the Crucifixion Altar group at the Liebieghaus museum in Frankfurt, Germany, shows the realistic style in which men were portrayed in the 15th century. In contrast, all women in the group are identical and idealized. (Dan Stoutamire/Stars and Stripes)

A detail from a group of alabaster sculptures from the Crucifixion Altar group at the Liebieghaus museum in Frankfurt, Germany, shows the realistic style in which men were portrayed in the 15th century. In contrast, all women in the group are identical and idealized. (Dan Stoutamire/Stars and Stripes) 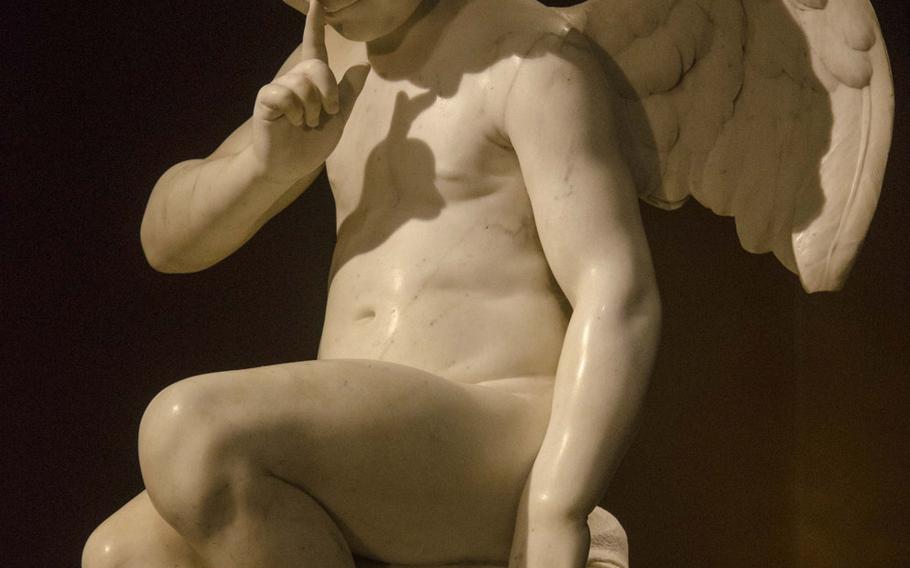 Menacing Love, an 18th century work by the French Rococo sculptor Etienne-Maurice Falconet, is on display at the Liebieghaus museum in Frankfurt, Germany, until the end of March 2016. (Dan Stoutamire/Stars and Stripes) The Bathing Girl, by 18th century French Rococo sculptor Etienne-Maurice Falconet, is on display at the Liebieghaus museum in Frankfurt, Germany, until March 2016 as part of its "Dangerous Liaisons" display highlighting art of the Rococo style in France. (Dan Stoutamire/Stars and Stripes)

Just down the street from the renowned Staedel museum, Frankfurt’s Liebieghaus sculpture museum features more than 3,000 works from ancient Egypt through the French Revolution and into modern times.

Housed in the picturesque former villa and grounds of Baron von Liebieg — a textile manufacturer who bequeathed it to the city of Frankfurt on the condition it be converted into an art museum — Liebieghaus offers a range of 60-minute guided tours with English-speaking docents, though tours must be booked in advance.

Themes include “The Vitality of the Middle Ages,” “The Personification of Grief: Pieta Depictions in the Liebieghaus,” “East Asia: Mythical World in a New Light” and many more.

Additionally, for 4 euros, visitors can buy an audio tour, which gives detailed information on most of the museum’s major pieces. The audio tours are available in English. Guests are also free to peruse the collection on their own at their leisure. Notes in both English and German identify each piece on display.

Among works of note are Myron’s marble Athena, from around 450 B.C.; and Tilman Riemenschneider’s sandstone Virgin Mary and Andrea della Robbia’s terracotta altar, both from the 16th century.

Through the end of March, the museum is featuring a display called “Dangerous Liaisons: The Art of the French Rococo” highlighting the 18th-century sculptural and artistic style noted for its use of lighter colors, graceful curves and playful themes that stand in stark contrast to the more formal Baroque style that preceded it. The works of the painter Francois Boucher and the sculptor Etienne-Maurice Falconet in particular are featured. To set the mood, the first room of the special exhibition is designed to look like a pre-revolutionary French salon.

If walking around the Liebieghaus makes you hungry or thirsty, the museum cafe with indoor and outdoor seating serves hot and cold beverages as well as a soup of the day and various salads and snacks.

Whether it’s part of a full-day excursion to Frankfurt’s museum district or a special trip, the Liebieghaus is certainly worth a visit. English-speaking staff, English signage and English guided and audio tours make it ideal for Americans living nearby to fully experience the rich and diverse collection on display.