For riders in Yokota group, it's got to be Harley-Davidson 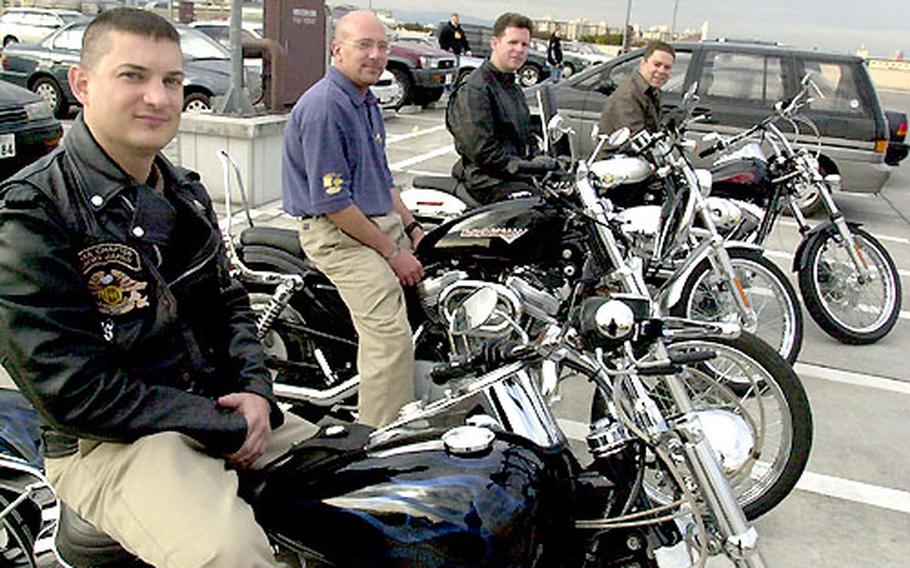 Yokota Harley riders, from left to right, Mike Young, John Weikert, Peter Dibenedetto and Max Genao, have taken their hogs all around Japan on group and solo rides. They receive a lot of attention on Japan’s roads, they say, because Japanese recognize Harleys as an American icon. (Jennifer H. Svan / S&S)

Yokota Harley riders, from left to right, Mike Young, John Weikert, Peter Dibenedetto and Max Genao, have taken their hogs all around Japan on group and solo rides. They receive a lot of attention on Japan’s roads, they say, because Japanese recognize Harleys as an American icon. (Jennifer H. Svan / S&S) 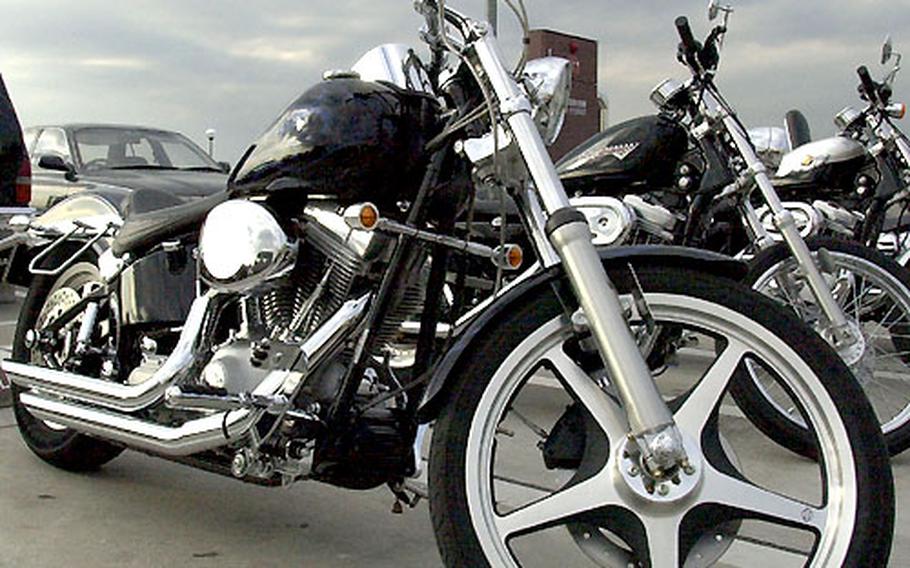 A row of Harley-Davidson motorcycles sits atop Yokota Air Base’s base exchange lot. America’s most famous hog is even popular overseas: About 25 base residents belong to a local Japanese Harley chapter, one of dozens around the world. (Jennifer H. Svan / S&S) 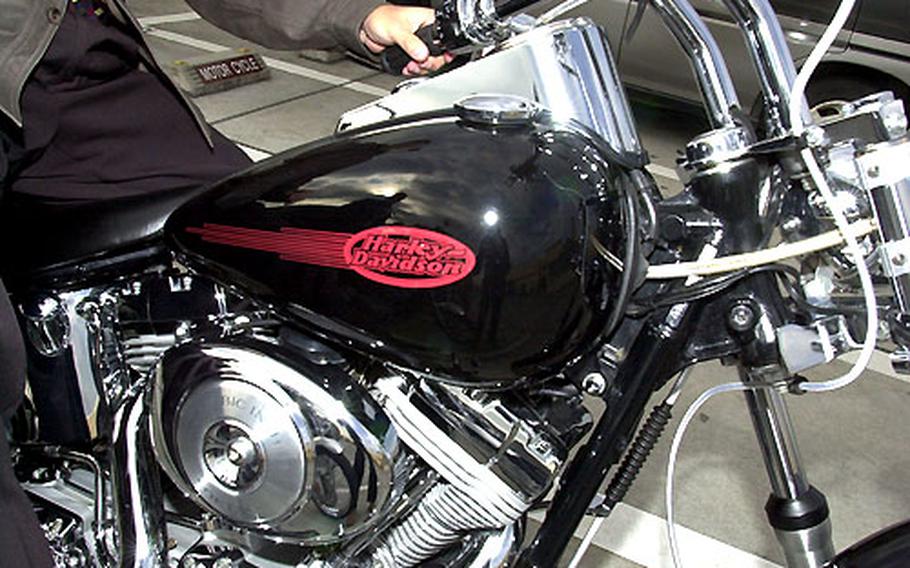 Harley riders at Yokota Air Base, Japan, say a Harley’s V-twin engine is superior to all other motorcycles. It has a unique sound, described as a low “potato, potato,” rumble, describes one rider. The Harley Davidson Motor Co. recently celebrated its 100-year anniversary. (Jennifer H. Svan / S&S)

Forget about Honda, Yamaha, even Ducati. For a group of Americans at Yokota Air Base, if it&#8217;s two wheels, it&#8217;s got to be Harley-Davidson.

For Young and fellow rider Max Genao, owning a Harley is akin to membership in a cross-cultural brotherhood. They and about 20 others from Yokota are members of the Harley Tama chapter, one of dozens of local Harley groups around the world. Membership fees are 10,000 yen a year, and the perks include organized rides around Japan.

Just as they would in the United States, the riders cruise expressways and mountain roads. But in Japan, a group ride follows different rules, Genao said.

Japan&#8217;s group mentality dictates that everyone stops when rest breaks are planned and that riders stay single file. In the States, &#8220;You ride side by side or in a couple of groups,&#8221; Young said.

About six to seven rides are planned a year. Past destinations have included Izu Peninsula and lakes Yamanashi and Okutama.

For a Harley owner, though, a basic rule of thumb applies regardless of country: A Harley hog and high speed don&#8217;t mix.

Others give a thumbs-up or take a photo.

One could argue Genao and Young are biased: Both work at Yokota&#8217;s New Car Sales selling Harley-Davidsons to servicemembers overseas. But both say they owned Harleys even before taking the job.

It&#8217;s the only hog with a V-twin engine and its styling and sound are unique, Young said.

A Harley can retail as much as $20,000. New Car Sales is given a finite number of bikes from the manufacturer to sell each year, as Harleys are in high demand.

While some bikes may be built for speed, a Harley allows its rider to travel long distances in comfort and style, Young said. A light cruiser has room for a few saddlebags with some overnight gear, while the larger bikes can be equipped for longer travels.

But if speed is your preference, a Harley can deliver, Genao said. &#8220;You can tune them to be very fast, but most folks leave them the way they are.&#8221;

For Genao, 38, revving up his hog on the weekends is a way to stay young at heart.

In S. Korea, riding is about memories, friendship

For riders in South Korea, the joy of the open road seems intimately woven with a remembrance of former military colleagues. Prisoner of War patches and other military mementos are just as likely to be sewn onto a leather jacket as the Harley-Davidson logo.

The American Steel Motorcycle Club Korea Chapter, for example, makes an annual Veterans&#8217; Day run to a spot of significance in South Korea. This year, they rode to the memorial site of Master Sgt. George Kinney, a soldier killed in the Korean War.

The group, many of whom are members of the Veterans of Foreign Wars Dongduchon post, laid a wreath at the memorial as their tribute to fallen comrades and soldiers of previous eras.

Further south, another group of bikers gets together on three-day weekends to explore South Korea and keep up long-standing friendships.

The Street Bikers United, a group of 13 riders from throughout South Korea, mark the onset of winter each year with the &#8220;Last Ride.&#8221; This year, it took the form of a three-day trip from Osan Air Base to the country&#8217;s east coast.

Among the members are many former military and current contractors at American bases. Their most popular ride is the bi-annual West Coast Beach Run, which culminates with camping and cookouts.