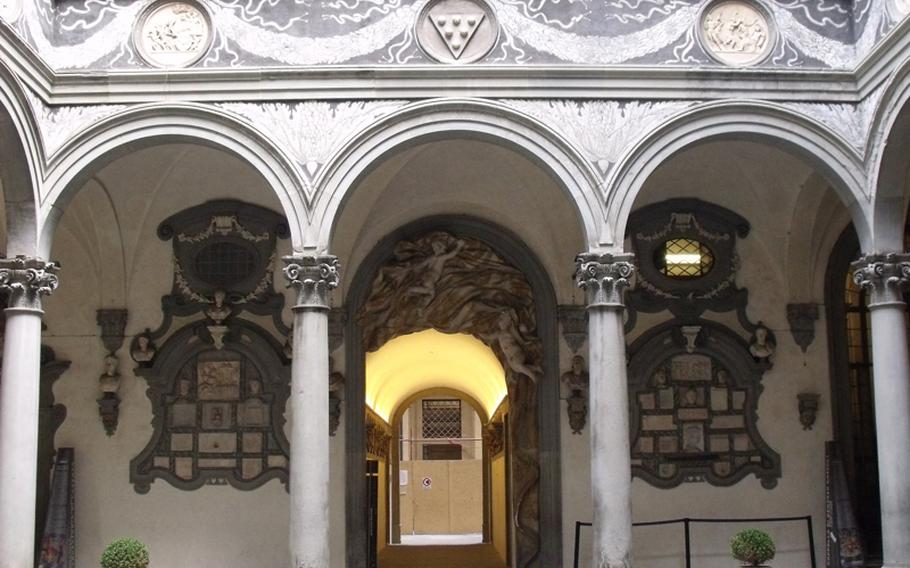 Buy Photo
The courtyard of columns designed by Michelozzo Michelozzi is one of the attractions of the residence built for the Medici family in Florence. It is also called the Palazzo Medici Riccardi, after the later family that acquired and expanded it. (Lisa M. Novak/Stars and Stripes)

Buy Photo
The courtyard of columns designed by Michelozzo Michelozzi is one of the attractions of the residence built for the Medici family in Florence. It is also called the Palazzo Medici Riccardi, after the later family that acquired and expanded it. (Lisa M. Novak/Stars and Stripes) 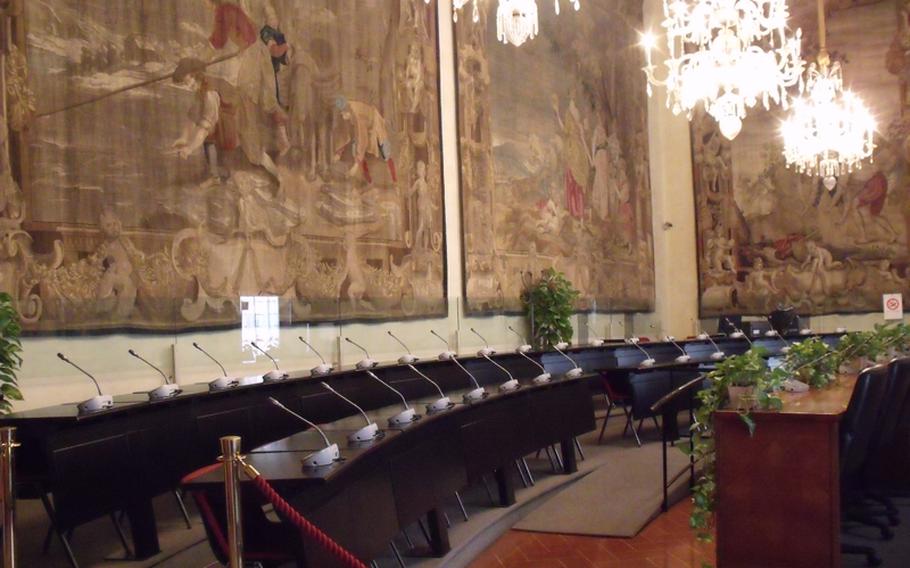 Buy Photo
The Quattro Stagioni conference room in the Medici Riccardi Palace holds provincial council meetings against the backdrop of the 17th-century tapestries for which the room is named. (Lisa M. Novak/Stars and Stripes) 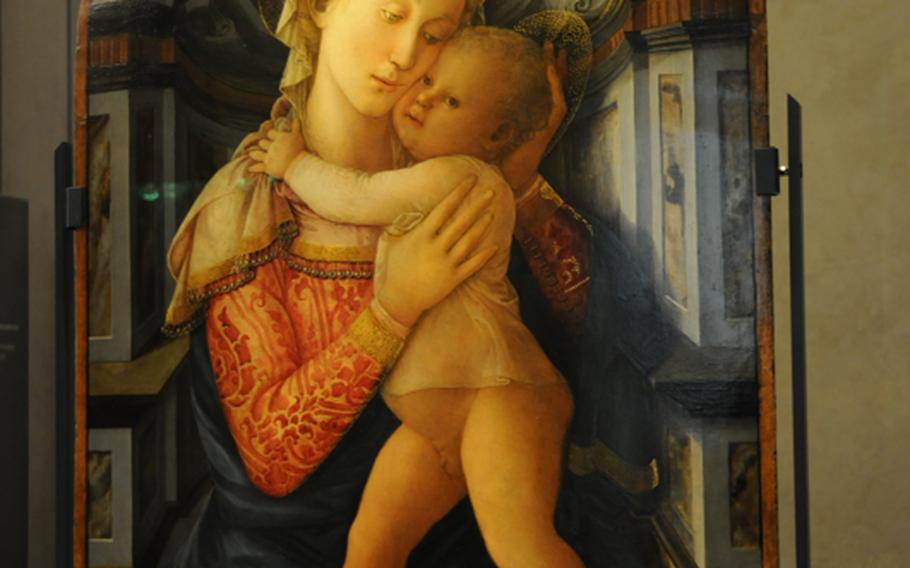 Buy Photo
A 15th-century painting by Filippo Lippi titled Madonna with Child is on display at the Medici Riccardi Palace. The wealthy Medici family helped make Florence a center for art, as well as commerce, political intrigue and religious power. (Sandra Jontz/Stars and Stripes) 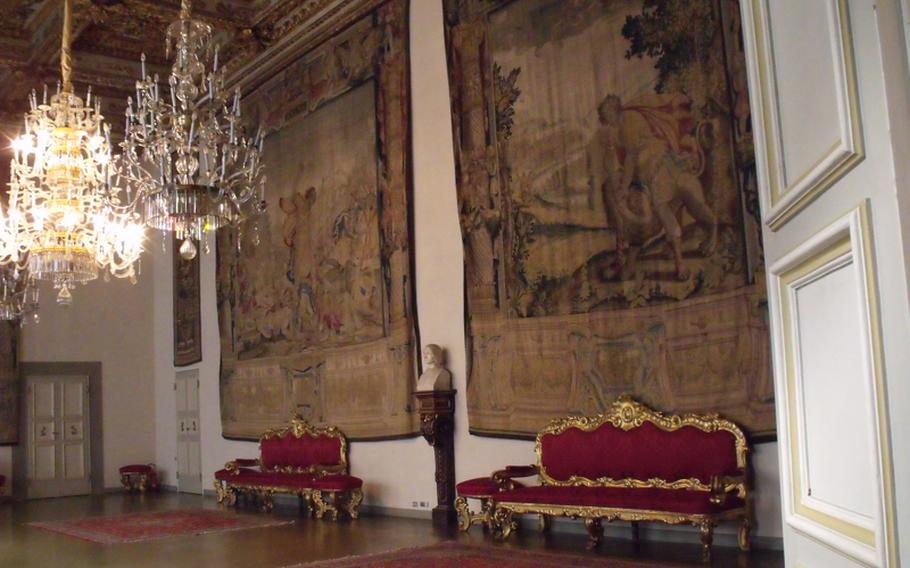 Buy Photo
One of the reception rooms in the Medici Riccardi Palace reflects the wealth of the Medici family. The residence, built in Florence in the 15th century, is considered a masterpiece of its time. (Sandra Jontz/Stars and Stripes) Even though there is no shortage of sights in the Italian city of Florence, a trip to the Palazzo Medici Riccardi is worthy of a spot on the itinerary.

The palace was once home to the family that made the city an intellectual gathering place of the highest order, as well as a mecca for art, commerce, political intrigue and religious power.

Located along the crowded Via Cavour in what was once known as the &ldquo;Medici quarter,&rdquo; the palace, completed in 1460, served as a family residence and business headquarters for the Medici. It was designed by Michelozzo Michelozzi after the original model by Filipo Brunelleschi (who put the dome on the city&rsquo;s Duomo) but rejected by Cosimo Medici as &ldquo;too sumptuous and magnificent and liable to stir envy among the populace. &hellip;&rdquo;

Cosimo the Elder, the patriarch who established the family&rsquo;s power base, knew all too well the consequence of envy. He spent 1434 in exile after the rival Albizzi family orchestrated his banishment from the city. The family&rsquo;s wealth and power attracted a steady stream of enemies throughout its 300 years of prominence.

The building blocks on the exterior of the building create three levels that go from rough and uneven to relatively uniform and ultimately to flush blocks topped off with a bold cornice roof. The north and south corners of the residence contain the Medici coat of arms and the crest of the Riccardi family, who brought the palace in the 17th century after the Medicis returned to the Palazzo Vecchio, the city&rsquo;s original seat of power.

We visited while some of the exterior was under renovation, so the grandeur, at least from the outside, was a bit subdued. Once inside, however, the palace was worthy of the name Medici.

The courtyard of columns, designed by Michelozzo, is striking. Huge stone friezes decorate the walls, above which is a portico decorated with cameo-style carvings.

While most of family&rsquo;s priceless artworks are in galleries, churches and other assorted buildings throughout the city and Europe, the palazzo retains a few enduring treasures, such as the Chapel of the Magi.

The chapel is about the size of a good walk-in closet or a New York City apartment. Only eight visitors at a time are allowed in. A massive, floor-to-ceiling fresco by Benozzo Gozzoli covers the room. It includes religious and historical figures, including family members Cosimo, his son Piero, and grandson Lorenzo the Magnificent.

The palace also has an interactive media room in what was once Lorenzo&rsquo;s bedroom, along with conference rooms (still in use today) decorated with 17th-century tapestries.

Visitors flock by the millions to see the Duomo, the Uffizi museum, Michelangelo&rsquo;s &ldquo;David,&rdquo; Ponte Vecchio and other treasures of Florence, but this site gives visitors a glimpse into the life of the family that put the city on the map.

DIRECTIONSThe palace is located in the city center at Via Cavour 3. Florence is about a 4&frac12;-hour drive from Naples via Autostrade A-1 and about three hours from Vicenza via A-22 and A-1.

COSTSAdmission costs 7 euros for adults; a reduced rate of 4 euros is available for those who qualify in several categories; children 6 and younger enter free.

A small but informative pamphlet guide is available for 1 euro. When buying tickets, it&rsquo;s possible to reserve a time at no charge to view the Chapel of the Magi, but the day we went there was no waiting time.

FOODThere are plenty of restaurants and cafes in the immediate area. And remember, this is the home of Steak Florentine, a large steak for only the truly hungry and carnivorous.