Few moments of joy can be found in an otherwise frustrating 'Mighty No. 9' 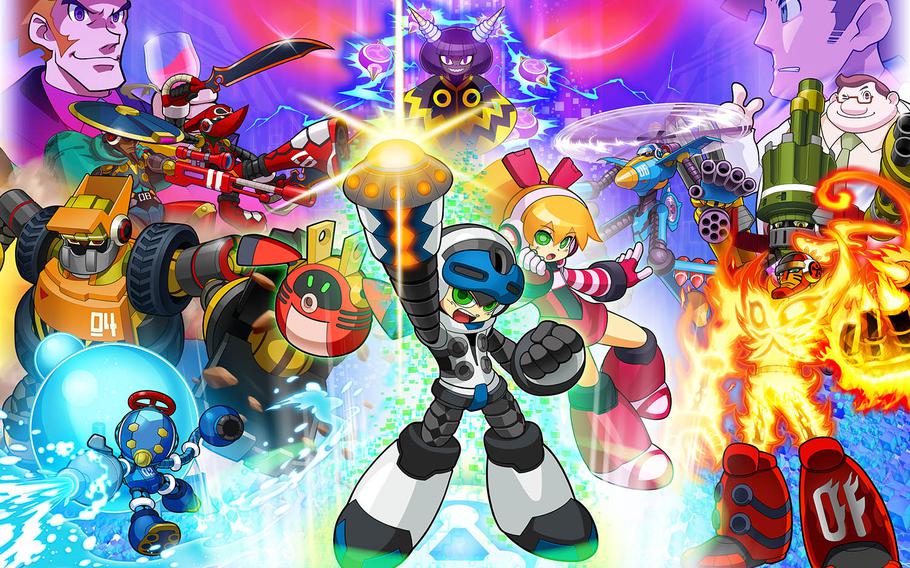 Kickstarter and other crowdfunding sources have given many disenfranchised video game auteurs a new avenue to bring their visions to life.

“Wasteland 2” and “Broken Age,” among others, would never have seen the light of day, were it not for the combined passions of their creators and their otherwise invisible fanbase.

So, when Keiji Inafune, one of creators of the legendary gaming franchise “Mega Man,” turned to Kickstarter, fans responded in droves. Spurred on by Capcom’s apparent abandonment of the beloved series, gamers donated more than $4 million to see “Mighty No. 9” brought to life.

That kind of money can buy a lot of things: Two 60-foot yachts; a veritable fleet of chromed-out Lamborghini Aventadors; a studio apartment in downtown San Francisco. What a $4 million-dollar budget apparently can’t buy, much to the dismay of the game’s backers, is a guarantee the resulting product will be any good.

“Mighty No. 9” was always billed as a spiritual successor to “Mega Man,” so there is no surprise that Inafune and his team stuck so closely to its tried-and-true formula. The joy of playing a new “Mega Man” wears off quickly though, as players are forced into a frustrating game that borrows so much from the past that it forgets to forge an identity of its own.

In “Mighty,” players will guide Beck, the game’s robot protagonist, through a dozen levels. Along the way, he’ll blast robots with his gun arm while navigating tricky platforming sections. A boss awaits at the end of each level.

It’s a simple formula, and one that the fans demanded. They wanted a new “Mega Man,” and by golly, they sort of got one. What backers did not request, though, was dull level design, sticky controls that never really click, or frustrating difficulty swings.

Some of those difficulty swings are inherent in the game’s purposefully old-school design. Some are due to a dogged refusal to give players any real control over the weapons and gear Beck is carrying, and others to uneven platforming sections that swing from mind-numbingly easy to bang-your-head-against-a-wall frustrating.

Enemy attacks, especially those from bosses, take away huge swaths of health. That would be fine if there was any real way to increase your health meter. There are healing items that can be earned with perfect combos, or collected through random drops, but they’re too random to really count on.

Coupled with the archaic “lose your allotted lives and you have to restart the entire level from scratch” design, this leads to players making it through a difficult level only to face a boss they have no hope of beating. There is no reward for making it through a difficult stage by the skin of your teeth, just the knowledge that you’re going to have to replay it again soon after getting creamed by the boss.

The controls aren’t nearly smooth enough for some of the more precise platforming sections, either.

Beck would sometimes simple refuse to grab onto a ledge or would double dash right off a ledge, seemingly of his own free will. The spotty controls were worsened by the game’s many frame-rate drops and stutters that caused more than a couple of deaths.

My time with “Mighty” wasn’t all bad. There were some small moments of joy to be found along the way. Finding a boss’ weak point and exploiting it for massive damage is as thrilling now as it was 20 years ago.

The dash mechanic gets a nod, too.

After dealing enough damage to an enemy, they begin to glow. Using the game’s primary dash will absorb them, removing them from the battlefield. Chaining together absorptions leads to a higher score and the possibility of a health item drop. When the mechanic worked properly it lead to some great, speed-run-like segments.

But there weren’t nearly enough of those moments to make up for frustration that builds up throughout the game. The game is difficult, but unlike a “Dark Souls” or “Super Meat Boy,” the challenge is artificially induced and often out of the player’s hands.

Success too often determines pre-knowledge of a level, the game’s controls working properly and a random drop being one that gives health, versus a useless power-up.

Visually, the game isn’t especially beautiful, either. Characters speak without moving their mouths, the final boss is barely animated, most of the levels are lifeless and the character designs are just knockoffs of “Mega Man.”

Inafune could have used this opportunity to make “Mighty” its own, visually distinct entity, but didn’t. As a result, the game’s look and feel just comes across as uninspired and dull.

There are also a lot of small complaints that add up to an underwhelming experience. The poor voice acting, the annoying text boxes that obstruct gameplay, the unskippable mini-cutscenes you have to sit through if you die, the game’s brevity (five hours at most).

But really, all of that can be summed up with this: “Might No. 9” is not the game backers wanted, it’s not the game “Mega Man” fans wanted, and even separated entirely from its baggage, it’s just not a good game.

Bottom Line: D Unless you can pick this up for a couple of bucks during a sale, I would recommend skipping it entirely.Platforms: PC (reviewed), PS4, Xbox One, Wii U, Xbox 360, PS3 (TBD 3DS, Vita)Online:mightyno9.com