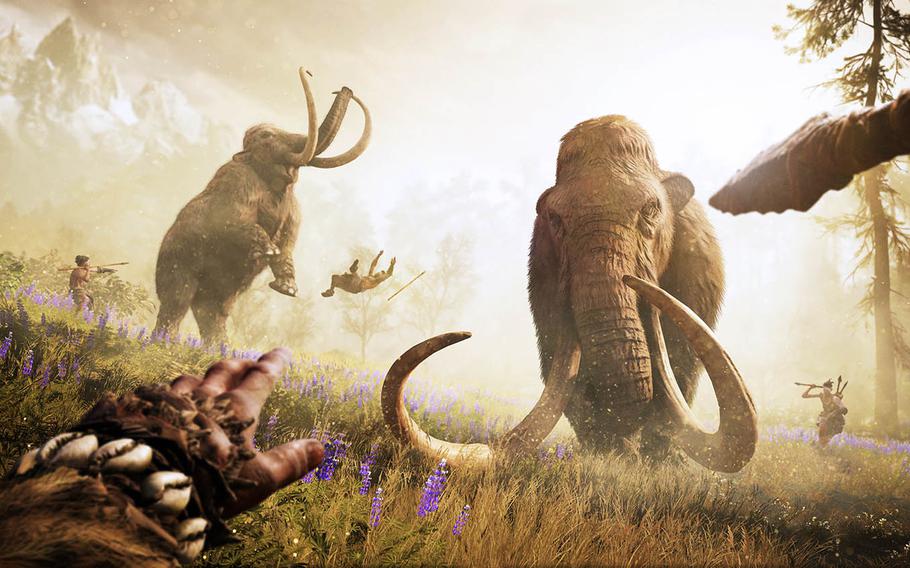 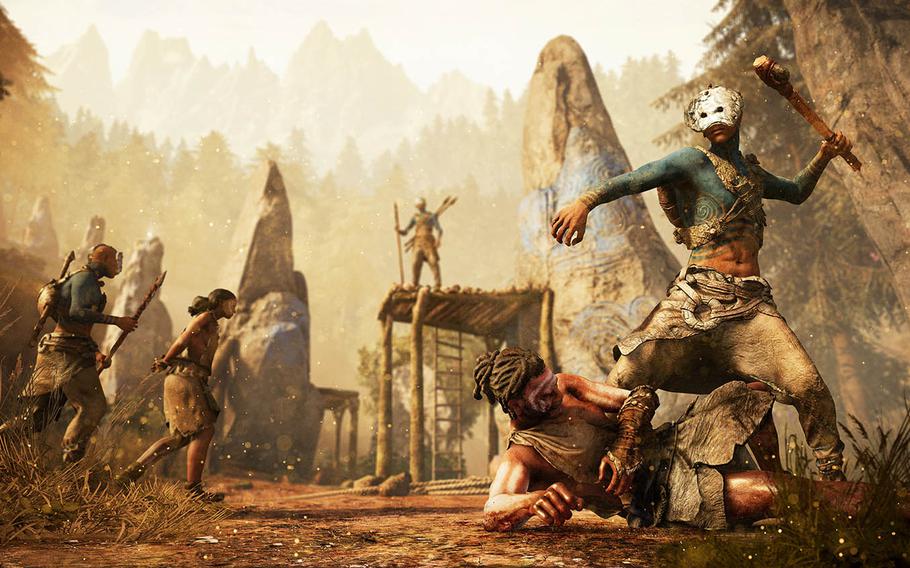 In “Far Cry Primal,” you’ll face extinction in a world where you’re just as likely to be the hunted as they are the hunter.

For those used to wielding plasma rifles, Ubisoft’s latest open-world adventure will represent a step backward — about 12,000 years backward to the Stone Age. Instead of incinerating irradiated ghouls, you’ll be pointing a spear at hungry jaguars and cannibalistic Neanderthals.

You play as Takker, a member of a band of hunters seeking Oros, the prehistoric equivalent of the promised land.

After an ill-fated mammoth hunt leaves you the sole survivor of your group, you stumble into Oros and quickly learn it has problems of its own. A tribe of Neanderthals has moved into the valley and killed or scattered all of the inhabitants. It’s your job to rebuild this society of hunter-gatherers, known as Wenja, and push back the invaders, who are known as Udam.

After the disastrous mammoth hunt, you are left with nothing. You have to gather materials to craft your own bow, arrows and spear, and along the way you pick up a club.

This sort of gathering, crafting and discovery continues throughout the game.

It’s a formula that will be very familiar to “Far Cry” fans, even though “Primal” offers a setting, society and technology that are less developed than those of previous games in the franchise. The game presents an open world with plants to gather, animals to hunt, people to rescue, oppressive enemies to vanquish and a community to save.

Along the way, you’ll find inventive new friends who can teach you technology that’s cutting edge — at least for the Stone Age. They will allow you to improve your spear and club and design new gear, such as a grappling hook that will allow you to climb cliffs and grenades made from bee hives.

You’ll also meet a shaman who brews magical potions from disgusting ingredients. (Why use the eye of a salamander when you have extra Neanderthal eyes laying around?) These concoctions will give you visions concerning your enemies and also enable you to acquire the powers of a beast master. This is easily the impressive ability in the game. You can bend animals to your will, starting with training an owl to act as your eyes on the sky. You can work your way through dogs, wolves, jaguars and bears until you reach the saber-toothed tiger. Your companion animals can be ordered to attack enemies, gather items or scout for enemies. The ultimate skill is the ability to ride a beast into battle. There’s nothing quite like climbing atop a saber-tooth tiger and spreading fear among your foes.

Hunting and gathering are essential elements of the game. Different animal skins, minerals and plants are needed to create weapons and upgrade your village hunts, which unlock new options and gear.

Takker is an expert stalker. You can use his special hunter senses to spot prey or opponents or follow the trails of wounded animals. After locating a target, you can sneak up without much trouble because of Takkar’s stealth. The only big decision is your method of attack. Do you snipe from a distance with your bow, move in close enough to lunge with or throw your spear or run in swinging your club?

It’s also important to complete missions that enable you to recruit additional villagers. Whenever you help or rescue people, they will join your community and unlock additional options as your settlement develops.

Eventually, you’ll explore icy new areas and encounter deadly new foes, such as the blue-painted Izila, who prefer to enslave their foes rather than eat them. This is all wrapped into a story that’s surprisingly interesting — even by Space Age standards.

The game’s biggest drawbacks revolve around its desire to keep things authentic to the period. For example, the limited selection of weapons is definitely realistic, but it also means that combat becomes a bit repetitive.

A bigger problem is the reliance on a “cave man language” for communication. I suspect this is intended to help immerse you in the world, but it ends up being incredibly annoying. It would be far more realistic if you could understand the language instantly and react to it naturally. Rather than encouraging immersion, it breaks your connection to the character.

The graphics are good, but forests, meadows and caves don’t offer much variety. After the diverse and colorful Himalayan setting of “Far Cry 4,” Oros seems pretty drab.

The game’s controls are smooth and efficient (something I appreciated greatly in the wake of a thumb injury).

The game earns its mature rating because of violence, gore and a few bare breasts.

Ubisoft provided a review copy of the game.