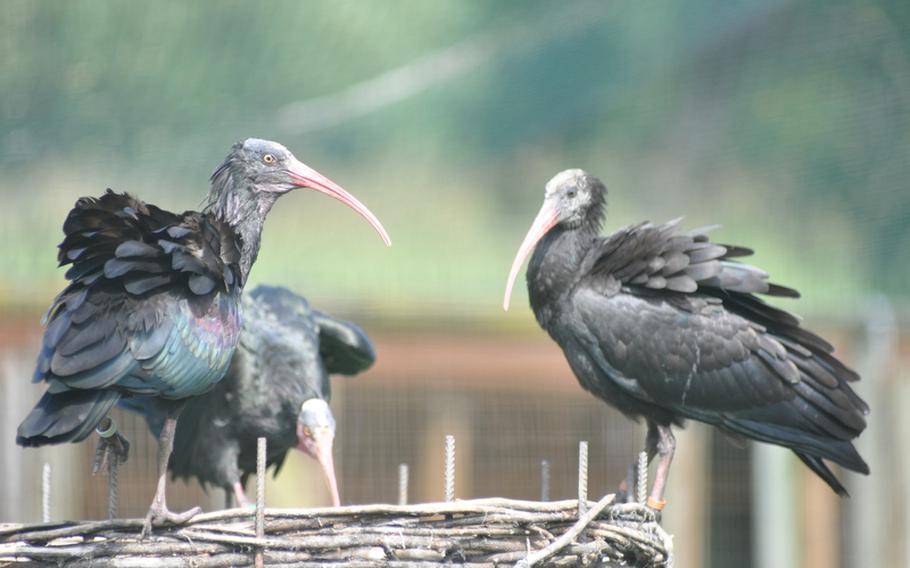 Buy Photo
Hermit ibises sit on a nest at the Oasi dei Quadris nature preserve outside of Fagagna, Italy. The center is a refuge for endangered birds such as the ibis and white stork. It is open to visitors on Sundays from late March through October. (Kent Harris/Stars and Stripes)

Buy Photo
Hermit ibises sit on a nest at the Oasi dei Quadris nature preserve outside of Fagagna, Italy. The center is a refuge for endangered birds such as the ibis and white stork. It is open to visitors on Sundays from late March through October. (Kent Harris/Stars and Stripes) 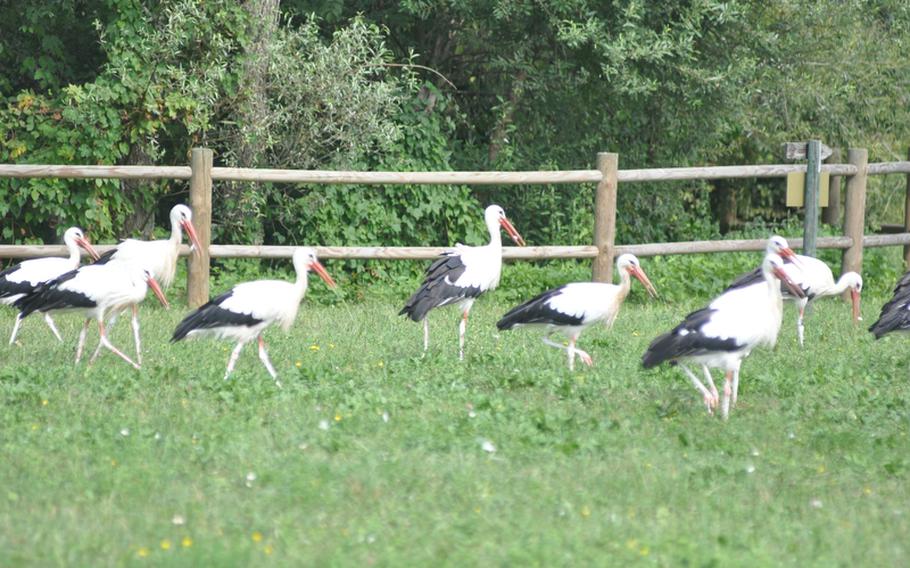 Buy Photo
White Storks leisurely walk in grassland at the Oasi dei Quadris nature preserve outside of Fagagna. The center has been caring for the birds since it opened in 1989 in the hopes of increasing the population in southern Europe. (Kent Harris/Stars and Stripes) 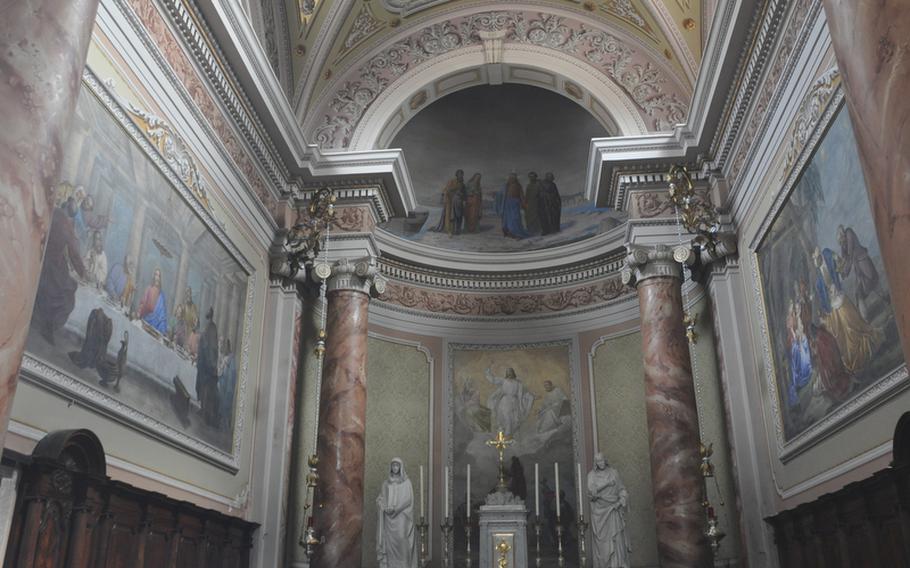 Buy Photo
The area surrounding the altar of the parish church in Fagagna features colorful paintings and marbled columns. (Kent Harris/Stars and Stripes) 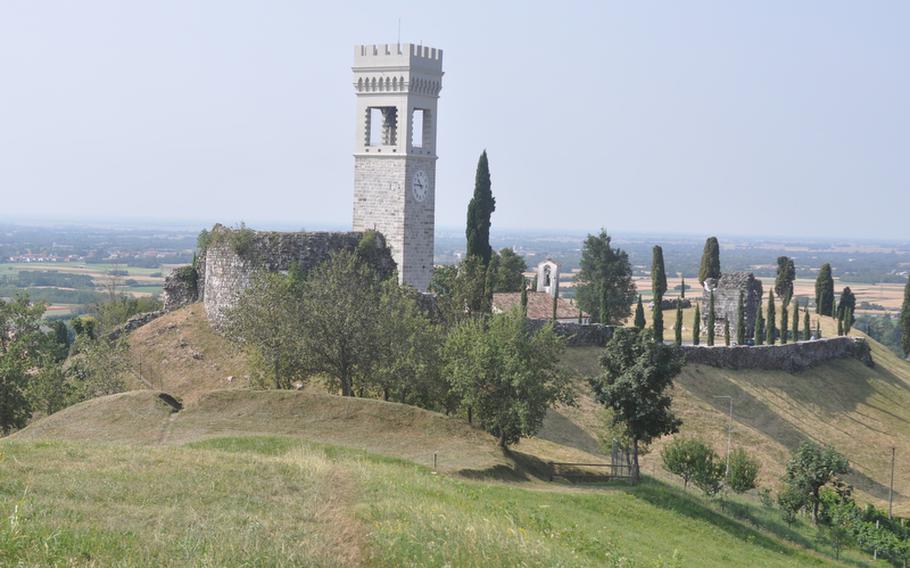 Buy Photo
The ruins of a castle surround a church bell tower atop a hill that provides sweeping views over the city of Fagagna and surrounding countryside. There's not much at all left of the castle, which dates to at least the 12th century. But visitors can get a good look at the city and surrounding countryside -- as well as some exercise -- by walking 10 minutes from the center of the city to the top. (Kent Harris/Stars and Stripes) 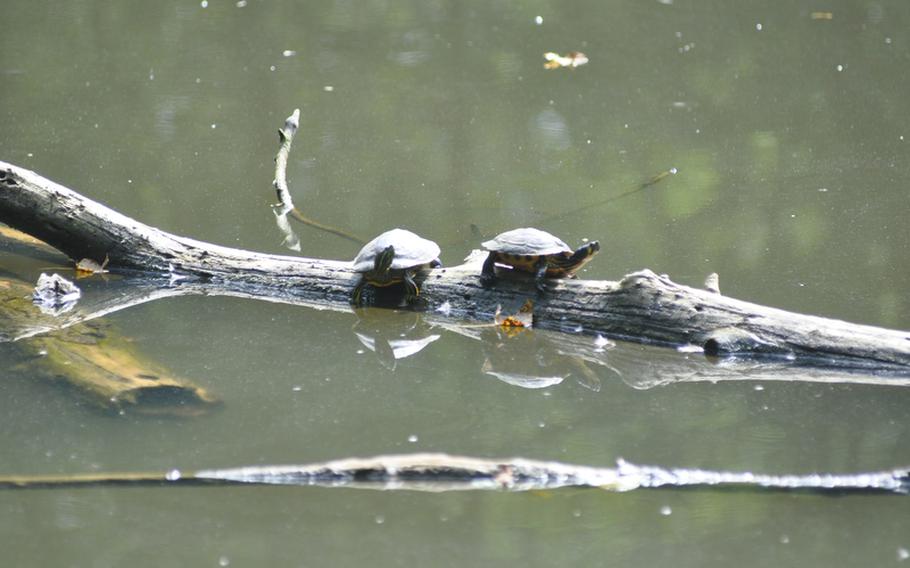 Buy Photo
Birds aren't the only creatures that call the Oasi dei Quadris nature preserve home. There's also a small aquarium with freshwater fish and a small lake that serves as the home for these turtles. (Kent Harris/Stars and Stripes) 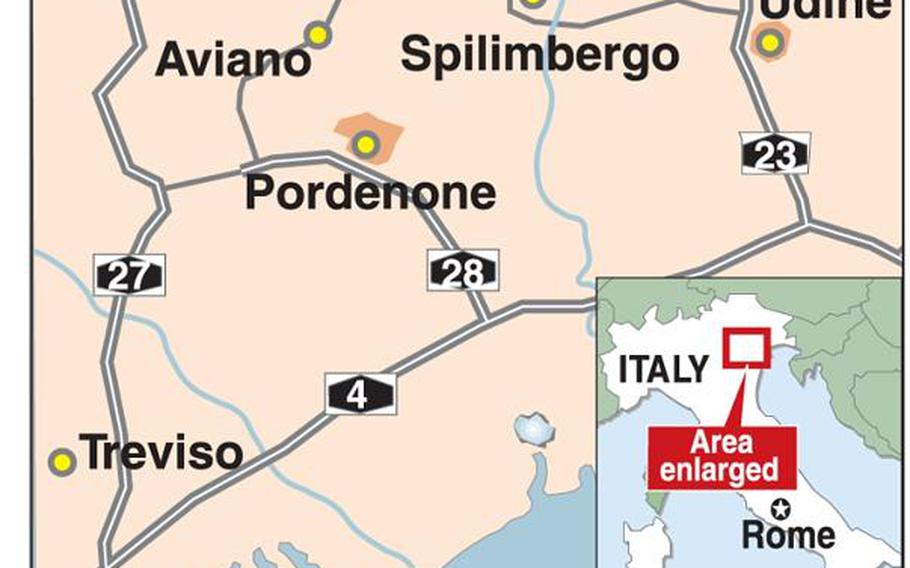 Sometimes, the &ldquo;when&rdquo; is as important as the &ldquo;where&rdquo; when visiting a new place. Fagagna, Italy, a small town about 30 miles northeast of Aviano Air Base, is such a place. While visitors can climb (or drive) up to the castle ruin atop the hill that dominates the town on any day, two nearby attractions &mdash; a bird sanctuary and a museum of country living &mdash; are open only on Sundays.

The Oasi dei Quadris, a nature preserve for white storks and hermit ibises located just outside town, is open Sundays from the last Sunday in March until the last Sunday in October. It is also open on Italian holidays during that period.

The Museo della Vita Contadina (Museum of Country Life), on the edge of the other side of town, is open only Sunday afternoons. It features a look at how people lived in the Friulia Venezia-Giulia region in the 17th century. It&rsquo;s the only one of the three attractions that has an entrance fee.

Fagagna itself is very like the many towns that dot the countryside all over northern Italy. It&rsquo;s made up of a half dozen settlements that date to Roman times.

The central square, Piazza Unita D&rsquo;Italia (Plaza of Italian Unity), is bordered by the municipal building, shops, offices and restaurants. The castle was first mentioned in church records in 983. Today, there are only remnants of some walls, a tower and a portion of the outer wall. No knights. No armor (shining or rusted). No drawbridge or moats.

But there are views. Stand facing the central square and you can see for miles in almost all directions. The tree-studded top of the hill that obscures the view in one direction is a short walk away and has picnic tables and benches for lunch with a view.

The bird sanctuary (follow the brown signs for Oasi Naturalistica) is less than a mile outside the town limits. It was established in 1989 by bird experts and enthusiasts concerned about the populations of storks and ibises, both of which were nearly extinct in the area.

Older storks roam the grounds nearby, but the young ones are housed in a large cage until they&rsquo;re 3 years old. They&rsquo;re then set free to join the rest of the flock.

Visitors aren&rsquo;t allowed to get close enough to touch the birds, but you can get close enough to watch them eat, interact with each other and preen. There&rsquo;s also a small aquarium with freshwater fish on the ground floor of the visitors center. The top floor has a video on the history of the center as well as displays and information about the birds and their migratory habits (many fly to Sicily in the winter). Everything is in Italian only.

The sanctuary also has a small lake that&rsquo;s home to turtles and other wildlife. The turtles appear to be very shy around people &mdash; so they&rsquo;re probably content every day of the week except Sunday.

On the QTDirectionsFagagna is about a 30-mile drive from Aviano Air Base. Take the SP19 or SP29 to Maniago and the SR464 past Spilimbergo toward Udine. Turn left at San Vito di Fagagna to reach the city center, where there is some free parking and other parking for short stays. There are also dirt lots at the sanctuary, museum and on top the hill at the Pieve di Santa Maria Assunta church. Those coming from further afield can take the north Udine exit off the A23 autostrada and travel the SR464 toward Spilimbergo.

TimesThere are no gates or fences to close off the ruins on the hill, so they&rsquo;re open any time. The views are best on sunny, clear days. The Oasi dei Quadris nature sanctuary is open on Sundays and Italian holidays from 10 a.m. to noon and 2:30-6:30 p.m. It&rsquo;s open from the last Sunday in March through the last Sunday in October. Spring is the best time to see newborn birds. The Museo della Vita Contadina is open Sundays from 2:30-6 p.m. in the spring and fall and 3:30-7 p.m. in summer.

CostsA day trip in Fagagna is about as cheap as it comes from Aviano. There are no road tolls along the country roads, the castle ruins and the nature sanctuary are free. Admission to the museum is 2.50 euros for adults and 1.50 for students and senior citizens.

FoodSan Daniele, producer of some of Italy&rsquo;s finest prosciutto, is just a few miles away. Polenta (corn meal) and mountain cheeses are prevalent. Fagagna is also known for roast goose and soups, and dishes made with local vegetables. Picolit is a locally produced wine.

InformationThe best sources are the city hall or the Pro Loco tourist association, but both aren&rsquo;t geared for American tourists. They&rsquo;re next to each other on the main square, Piazza Unita D&rsquo;Italia. Volunteers at the sanctuary may speak some English, but brochures are only in Italian. The town has a website with a link to the museum, all in Italian &ndash; at www.comune.fagagna.ud.it/hh/index.php. The nature reserve is online at www.oasideiquadris.it. It&rsquo;s also on Facebook.