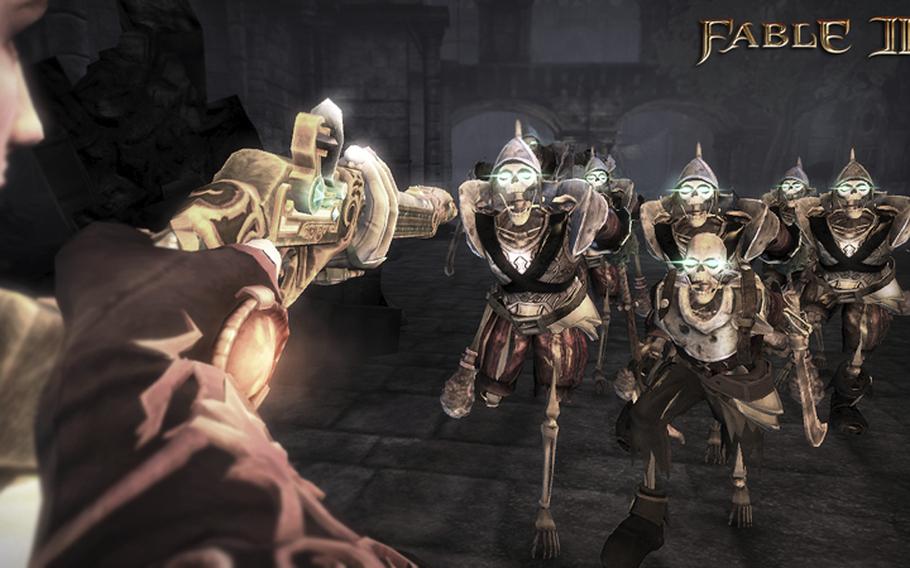 A trusty firearm can deal with all sorts of trouble in 'Fable III.' (Lionhead Studios)

A trusty firearm can deal with all sorts of trouble in 'Fable III.' (Lionhead Studios) 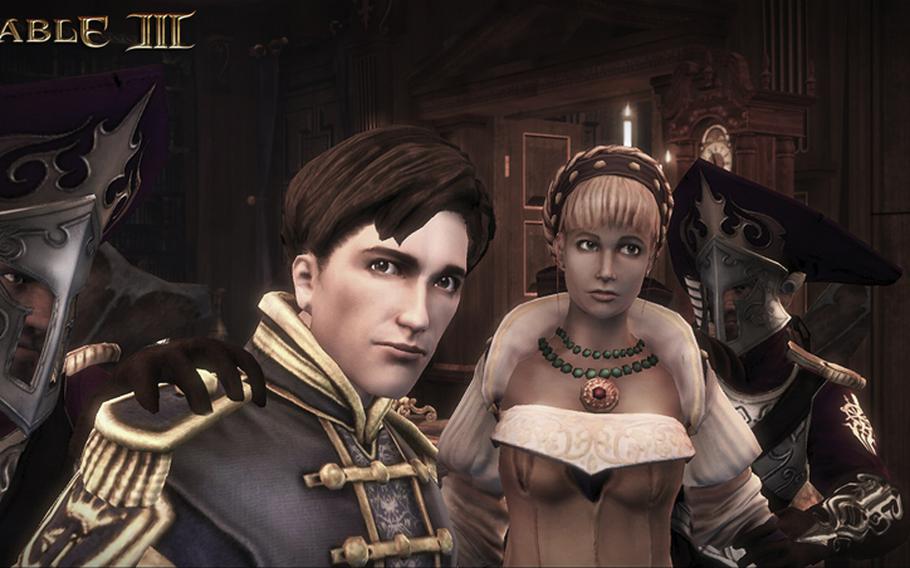 In 'Fable III,' your brother's guards are always ready to deal with suspicious characters - even when that includes you. (Lionhead Studios) Your older brother is a nasty despot in 'Fable III.' (Lionhead Studios)

The world of &ldquo;Fable&rdquo; always has been about choices and change so it&rsquo;s no surprise that &ldquo;Fable III&rdquo; will bring plenty of both.

Peter Molyneux of Lionhead Studios, the developer and creator of &ldquo;Fable,&rdquo; stopped in Washington, D.C., recently to show off the latest version of the game and to offer a test drive of the opening scenes.

The game &mdash; which is due to be released Oct. 26 on the Xbox 360 &mdash; is set in the realm of Albion a few decades after the events of &ldquo;Fable II.&rdquo; You play as the brother or sister of a ruthless tyrant. As you witness his oppression, you decide to rebel against the evil regime.

For the first half of the game, you lead the efforts to topple your brother from the throne. During the second half, you hold the reins of power. Will you follow your brother&rsquo;s lead or be a more enlightened ruler?

As in previous &ldquo;Fable&rdquo; games, your decisions &mdash; for good or for evil &mdash; will affect the course of the adventure, characters&rsquo; reactions to you and even your very appearance. For example, you will have to make promises in order to gain followers. Will you keep them? Even if they will conflict with your own interests?

&ldquo;How much are you willing to sacrifice your popularity for the common good? &hellip; That is oddly relevant in today&rsquo;s world,&rdquo; Molyneux said, just a few blocks away from the U.S. Capitol.

It&rsquo;s all very intriguing, but Molyneux was actually in town to show off changes in the game&rsquo;s interface and style of play that are certain to evoke smiles from &ldquo;Fable&rdquo; fans.

The basic idea behind many of the changes was to streamline the game play and offer much more customization of the experience. The result is a game that still has many role-playing elements but plays much more like an action/adventure.

Previous &ldquo;Fable&rdquo; games leaned more toward the role-playing genre so players spent a lot of time sifting through two-dimensional menus to dress, arm and equip their character and maintain their inventory &mdash; pretty standard stuff in RPGs.

However, Molyneux thought this interface was &ldquo;atrocious&rdquo; and decided to switch to a more graphical treatment. The result is the Sanctuary. This feature is accessible at any point in the game with the push of a button. It opens into a series or rooms where you can actually see the clothing, weapons, spell gauntlets and other items that you have acquired. You can manage your inventory and plan your actions in the Sanctuary.

To assist you with all this is Jasper the butler, who is voiced by John Cleese. The great British comedian has recorded thousands of lines of wry wit, adding much to the game&rsquo;s ornery brand of humor.

Lionhead also has made big changes to the experience and leveling system.

Most games add to a sort of mystical bank account as players complete quests and take down enemies. At some seemingly random point, the character starts to glow, gains a level and increases in strength, ability and proficiency.

Molyneux wasn&rsquo;t satisfied with this. As a result, &ldquo;Fable III&rdquo; replaces the abstract accumulation of numbers with the accumulation of followers. Basically, people gravitate toward your cause &mdash; or flee from it &mdash; based on your actions.

As you gain experience, you travel along a path that&rsquo;s called &ldquo;journey to rule.&rdquo; This features a series of gates that represent the levels the character attains during his adventures. Of course this is just one more example of how Lionhead has switched from lists and menus to a visual presentation of what&rsquo;s going on &mdash; adding to the sense of immersion.

&ldquo;I love the feeling of progression you get,&rdquo; Molyneux said.

The &ldquo;journey to rule&rdquo; also features a number of chests where you can &ldquo;spend&rdquo; your followers to unlock various game-play features, such as marriage, clothes dying and making friends.

The fact that you must unlock these actions is a shift away from the system used in &ldquo;Fable II.&rdquo; That game offered all sorts of game-play elements. However, Molyneux said that about 60 percent of players didn&rsquo;t understand all of the features &mdash; and some didn&rsquo;t even like many of them. With the new system, &ldquo;Fable III&rdquo; will allow you to select the features you like, bypass those you don&rsquo;t and &ldquo;craft your own &lsquo;Fable&rsquo; experience,&rdquo; as Molyneux says.

Molyneux hopes that these changes will make Albion a richer, deeper and more enjoyable place to visit.

&ldquo;We just love making &lsquo;Fable,&rsquo; and it&rsquo;s a world we care so much about,&rdquo; he said.