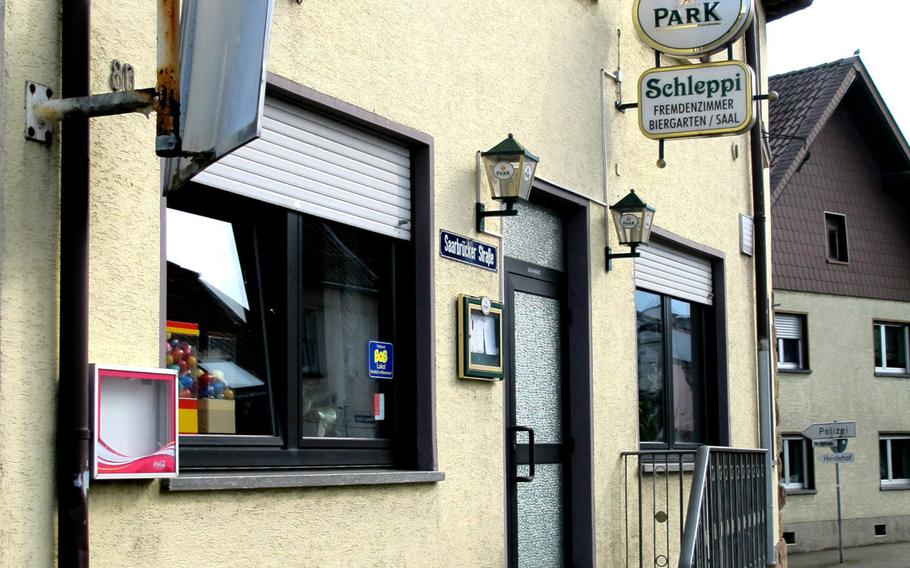 Gasthaus Schleppi is located on the main street through Schoenenberg-Kuebelberg, Germany, a small town just off Autobahn 6 west of Ramstein Air Base. (Gregory Broome/Stars and Stripes)

Gasthaus Schleppi is located on the main street through Schoenenberg-Kuebelberg, Germany, a small town just off Autobahn 6 west of Ramstein Air Base. (Gregory Broome/Stars and Stripes) 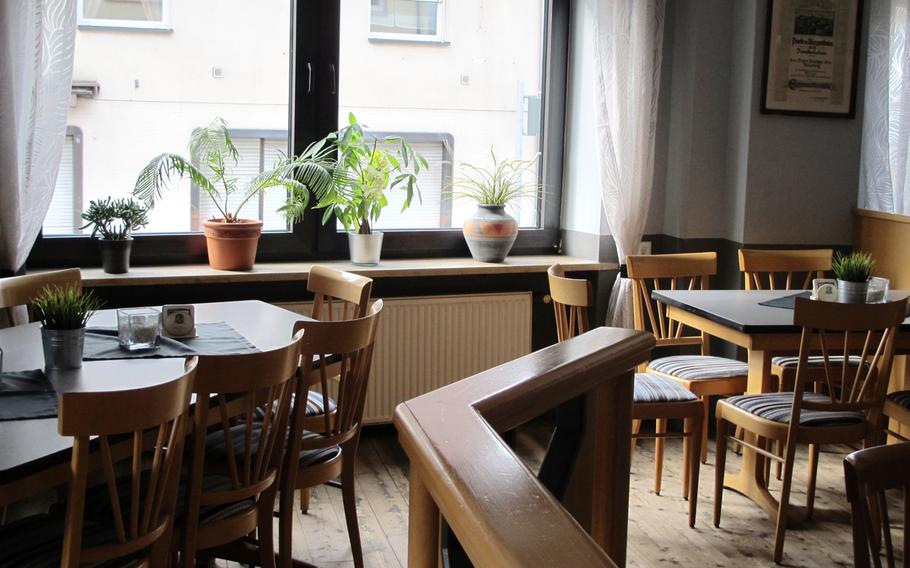 The unassuming interior of Gasthaus Schleppi features wood floors and a handful of scattered tables. The restaurant fills up with apparent local regulars in the later evening. (Gregory Broome/Stars and Stripes) 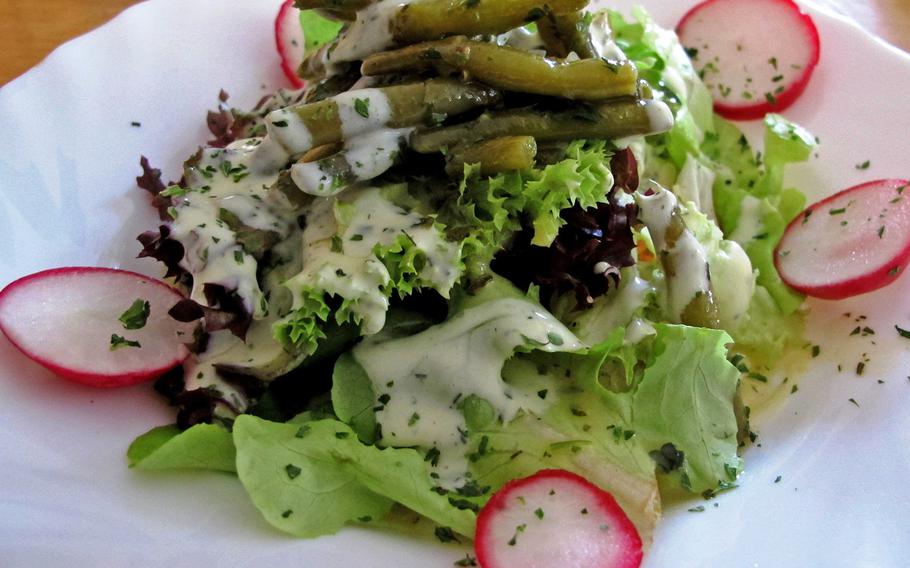 Gasthaus Schleppi offers a seasonal take on the traditional pre-meal salad. Schleppi's version in early June included radishes and asparagus, a very popular delicacy in Germany when it is in season. (Gregory Broome/Stars and Stripes) 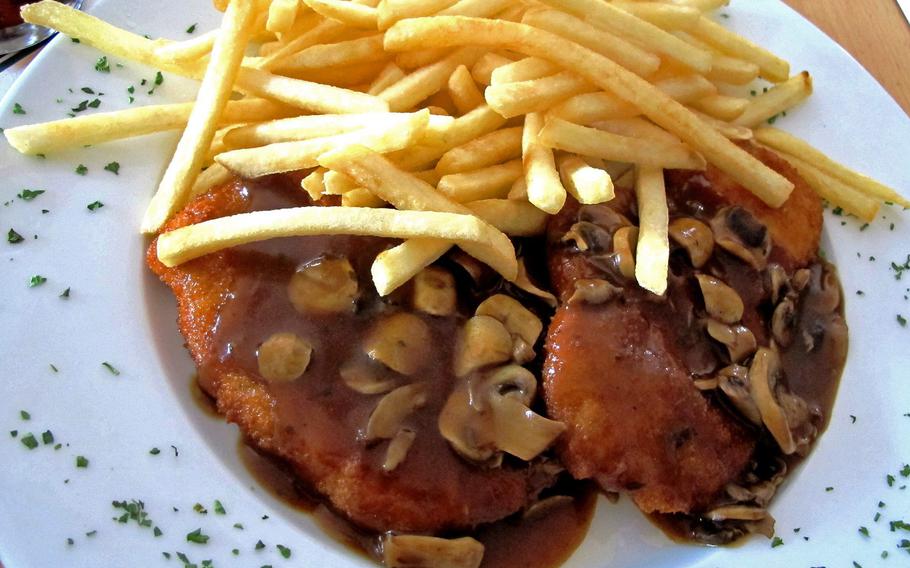 Gasthaus Schleppi offers a Monday evening special on schnitzel, fries and salad, including this jaegerschnitzel with mushrroms and gravy. The entree, side and salad cost 7.50 euros. The restaurant is in the town of Schoenenberg-Kuebelberg, Germany, west of Ramstein Air Base. (Gregory Broome/Stars and Stripes) 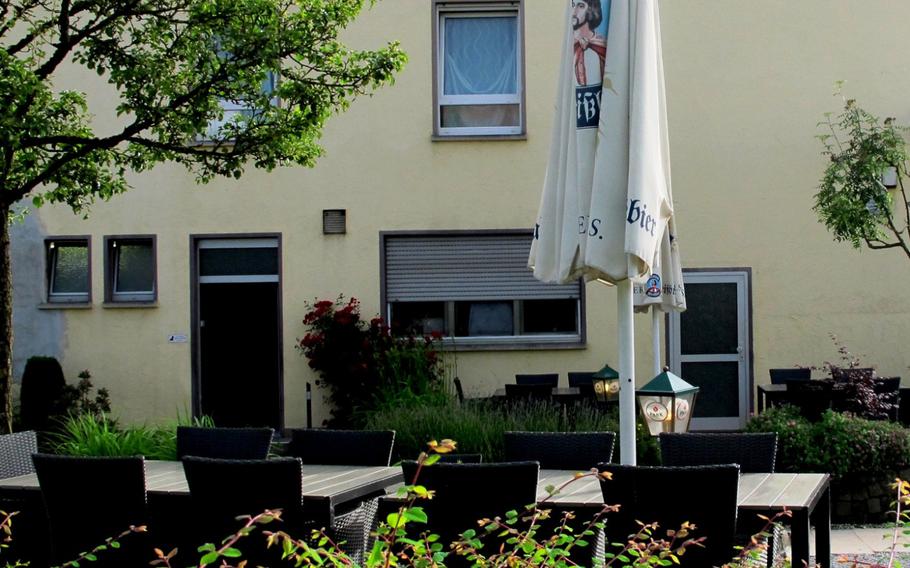 It doesn’t get much more authentic than Gasthaus Schleppi.

The restaurant, located in the village of Schoenenberg-Kuebelberg, west of Ramstein Air Base, offers straightforward German fare in a pleasant but unadorned setting. On warm days, guests can sit in the beer garden outside. On my family’s recent visit, Schleppi offered unassuming local charm and open-armed hospitality that extended beyond the staff.

Schleppi offers an English-language menu, but the proprietors, present on the evening of our visit, spoke very limited English. In fact, our server looked at me quizzically when I attempted to order an advertised shot of peach alcohol in German, inflected with what I suddenly and self-consciously realized was an overwhelming American accent.

At a loss, the server enlisted the help of a man at the bar, who approached our table smiling and eager to put his promised English skills to the test. I tried again, carefully enunciating both the English word “peach” and its German equivalent, pfirsich, while gesturing to the board on which it was mentioned. The man gave a knowing nod and started to explain to me which two teams were competing in the Euro Cup soccer game showing on the TV next to the board advertising the elusive drink.

Somehow, time and distance helped the server figure out my meaning as she eavesdropped on our struggling conversation from behind the bar. She loudly proclaimed, “Ah, pfirsich likoer!”

My helpful new friend smiled and clapped me on the back at the resolution of the mystery. Then he said “No, thanks,” explaining that peach liquor was too sweet for him and he was only drinking beer. Turns out he was still confused — now he thought I was trying to buy him a drink.

You don’t have these problems at Chili’s, I thought to myself. But you also don’t get these memorable, unexpected experiences.

With the confusion cleared up, my family and I turned to our meals. We each ordered a schnitzel with french fries and a house salad, taking advantage of a Monday evening special that delivered all four of our entrees for 30 euros total. The food was very good, the service friendly and attentive, despite the formidable language barrier.

We finished our schnitzels, watched some more of that soccer game and headed out into the evening. As we left I offered customary good-byes to all of the apparent regulars occupying the bar stools and scattered tables, including my English-speaking friend at the bar. Looking back, I wish I’d bought him a beer.

Prices: Full-price entrees are as cheap as 7 or 8 euros ($7.85 to $9) for pizza and pasta, but the salads and schnitzels start at about 10 euros and the meat entrees are upwards of 11 euros. The restaurant offers a few specials: any schnitzel and sides for 7.50 euros on Mondays, all pizzas for 6 euros Wednesdays and steak with sides for 12.50 euros on Thursdaya. Friday through Sunday, children accompanying a full-paying adultveat free from the children’s menu.