Stuttgart: A celebration of swine 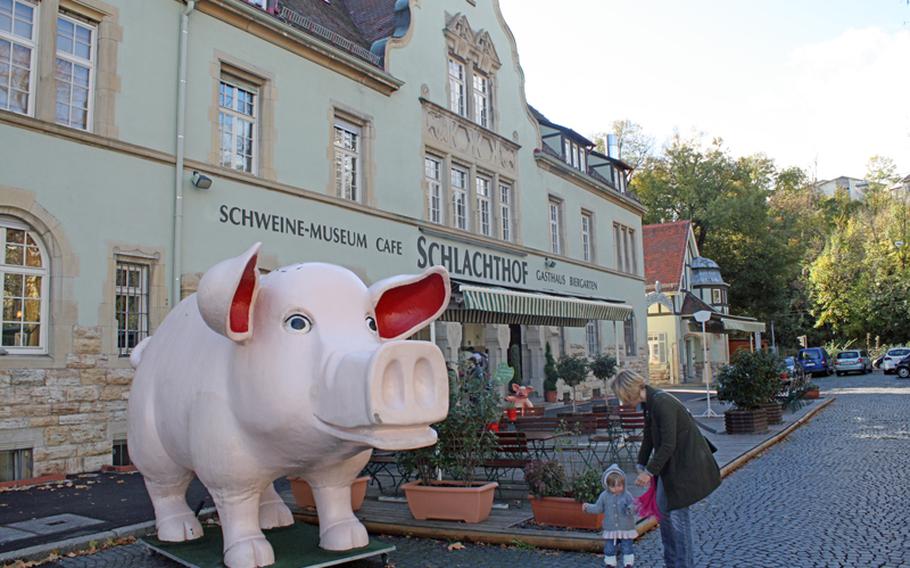 Buy Photo
A mighty fine swine greets visitors to the Schweine Museum in Stuttgart, Germany, which opened in 2010. The museum is all about the role of the pig in society and spotlights the pig as cartoon character, stuffed animal and food staple. (John Vandiver/Stars and Stripes)

Buy Photo
A mighty fine swine greets visitors to the Schweine Museum in Stuttgart, Germany, which opened in 2010. The museum is all about the role of the pig in society and spotlights the pig as cartoon character, stuffed animal and food staple. (John Vandiver/Stars and Stripes) 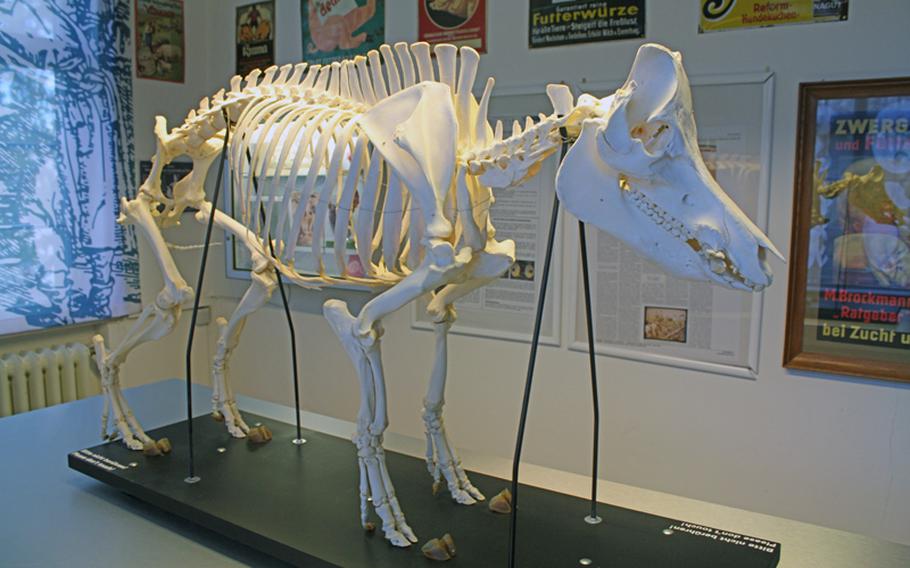 Buy Photo
In addition to quirky pig-themed works of art, the Schweine Museum in Stuttgart, Germany, also offers plenty of education on the pig, which has been domesticated for thousands of years. Displays of pig skins and skeletons are mixed in with whimsical displays. (John Vandiver/Stars and Stripes) 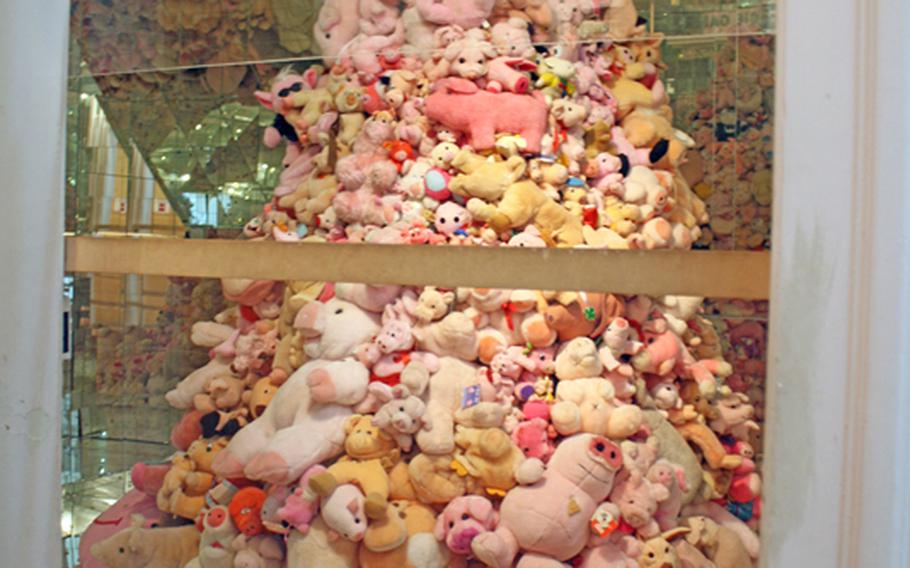 Buy Photo
A pyramid of stuffed pigs are among the displays at the Schweine Museum in Stuttgart, Germany, billed as the world's largest museum devoted to swine. The museum features 50,000 pig objects of various shapes and sizes. (John Vandiver/Stars and Stripes) 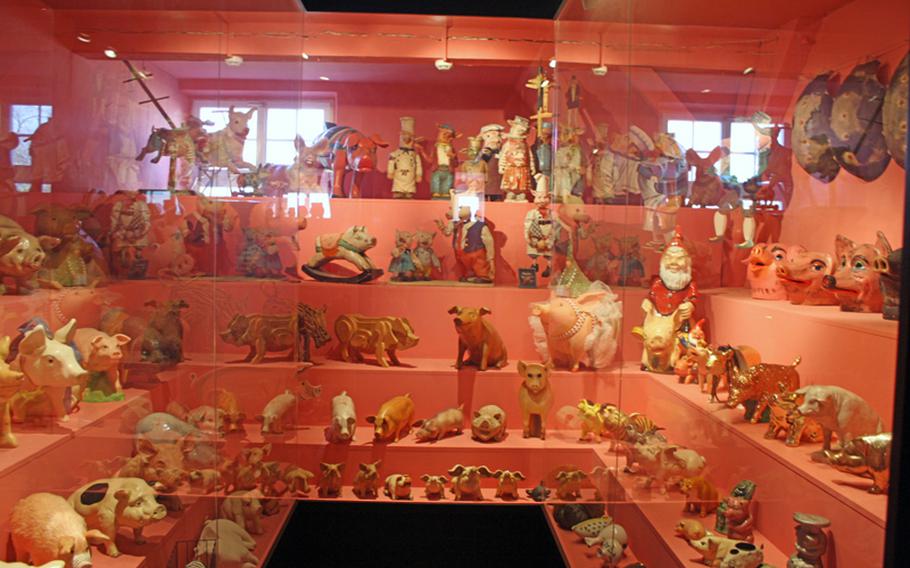 Buy Photo
These little piggies are just some of the 50,000 pieces of memorabilia honoring the history and importance of swine at the Schweine Museum in Stuttgart, Germany. (John Vandiver/Stars and Stripes) 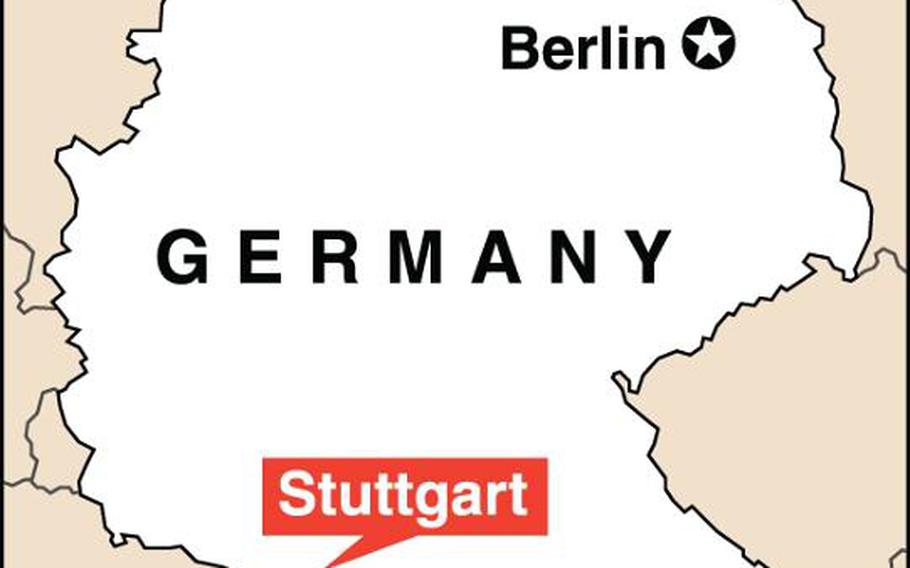 Few consume as much pig as the people of Germany.

They devour it in too many forms to mention: pig knuckles, Leberkase (a meatloaf-like dish), Bockwurst (sausage) and wieners of every shape and size, just to name a few.

To be sure, the pig has a special place in the hearts &mdash; and stomachs &mdash; of the German people. So it shouldn&rsquo;t be surprising that this long love affair at some point had to be formally commemorated. Enter the Schweine Museum in Stuttgart, home to what is billed to be the world&rsquo;s biggest museum dedicated to the pig.

Opened in 2010 in Stuttgart East, and within view of the Mercedes Benz Arena, the Schweine Museum celebrates the swine for its contribution to cuisine and kitschy fun.

Some 50,000 pieces of pig memorabilia are displayed in the museum&rsquo;s 25 rooms. These include stuffed animals of every shape and size, thousands of piggy banks, random pig-themed works of art and plenty of furry pelts that show the boar&rsquo;s value as wild game.

For all its quirky weirdness, visitors also leave the museum with a better understanding of the pig&rsquo;s important place in society. Pig trivia abounds as visitors investigate the display rooms.

Did you know the earliest piggy bank is thought to date to the 13th century and was discovered in the town of Billeben in the German state of Thuringia? I didn&rsquo;t. I also didn&rsquo;t realize the subject is a source of some controversy among so-called &ldquo;porcologues,&rdquo; who question the authenticity of the Billeben piggy bank since no coins were actually found inside it.

Here are some other interesting museum fast facts:

--&ensp;While the U.S. consumes more meat per capita than any other country, it is only 21st when it comes to pork consumption. The world leader is Austria followed by Spain, Serbia and Germany.

--&ensp;The pig has been domesticated for thousands of years, with the oldest evidence of &ldquo;pig housing&rdquo; dating back 9,000 years in southeastern Turkey.

--&ensp;The precise number of pig breeds is up for debate, but it is estimated that there are 150 around the world.

Some of those breeds can be sampled right inside the museum, which also houses a restaurant that, as you would expect, offers plenty of swine on the menu. There&rsquo;s also a lovely beer garden in the back, where you can partake in Germany&rsquo;s other national passion when the weather is nice.

On the QT ...Directions: The Schweine Museum, located at Schlachthof Strasse 2a, Stuttgart, in Stuttgart East, is less than a mile southwest of the Mercedes Benz Arena. Locally, the museum is easiest to reach by U-bahn. Simply take the U-9 to Schlachthof and walk about 50 meters. Keep an eye out for the big pig on display.

Food: The museum has its own restaurant with a menu that naturally emphasizes pork dishes. Prices range from 10 euros to 18 euros for more dishes.