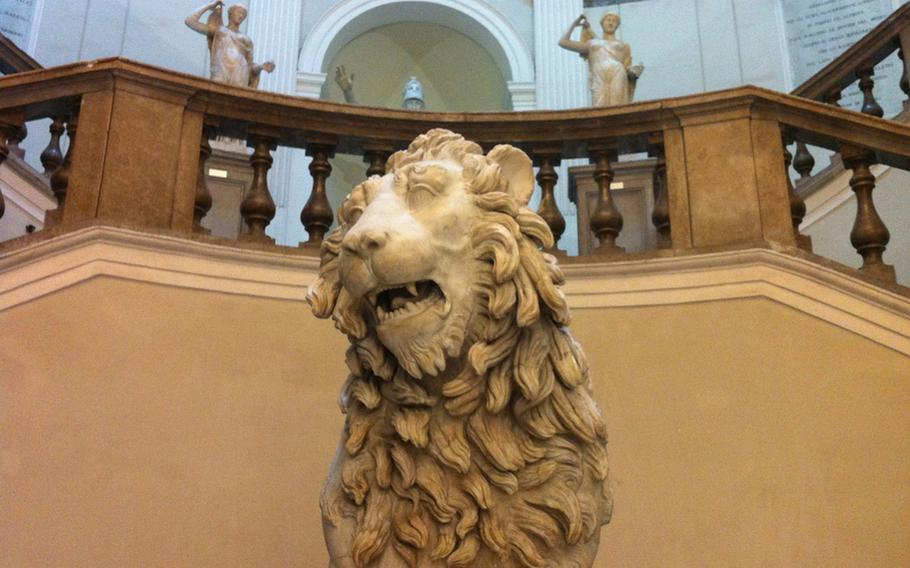 The National Archaeological Museum in the heart of Naples, Italy, is a great place to get acquainted with the rich history of the region, including this feline statue. (Geoff Ziezulewicz/Stars and Stri)

The National Archaeological Museum in the heart of Naples, Italy, is a great place to get acquainted with the rich history of the region, including this feline statue. (Geoff Ziezulewicz/Stars and Stri) The Naples National Archaeological Museum is full of the wonders of Roman antiquity, where artists created intricate, enduring works of art. (Geoff Ziezulewicz/Stars and Stri) 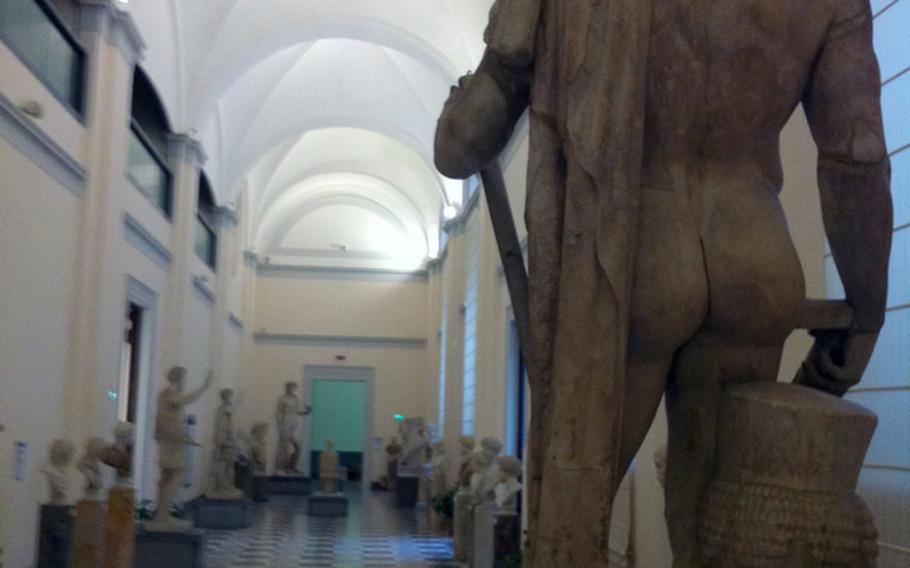 The Naples National Archaeological Museum in the heart of the old city is full of statues and other ancient Roman works of art. (Geoff Ziezulewicz/Stars and Stri) Amid the near-constant cacophony of blaring car horns, rumbling traffic and buzzing scooters, among the exaggerated hand gestures, litter and smog, it can be hard to keep in mind that Naples, Italy, and its environs are chock-full of ancient and accessible history.

Ruins from former Roman glories abound. And if you&rsquo;re looking for a way to soak in some relics, the Naples National Archaeological Museum is a good place to slake that thirst for history.

Located in the heart of the old city, in what was a cavalry barracks centuries ago, the museum offers a host of frescoes, marble-tiled grandiosity and sculptures in various states of undress from the old Roman towns of Pompeii, Stabiae and Herculaneum, among others.

The statues are really something to see. It&rsquo;s remarkable that, ages ago, in a much more low-tech time, artists were able to create such intricate, emotional and enduring works of art, truly giving us a look into another time.

Of particular interest are the items once part of the Farnese family&rsquo;s collection, built up over more than 300 years and a fine indicator of the alluring power of Roman antiquity.

The Farnese family, and Cardinal Alessandro Farnese in particular during the 16th century, were avid collectors of Roman Empire works of art, according to an account on the University of Maryland University College&rsquo;s Italian studies Web page.

The sculptures now at the Naples museum were once decorative furnishings in various Farnese family residences in Rome and Parma. Often, the statues were status symbols in Farnese residences, meant to showcase the brood&rsquo;s good life.

The Farnese family acquired its collection through excavation of Roman ruins. Many of the works on display today are copies of Greek originals.

Eventually the collection was incorporated into a museum that was the precursor to today&rsquo;s facility.

While the collection is made up of old relics, the museum continues to grow with new excavations in Naples and Caserta, according to a museum guide.

A personal favorites of mine was &ldquo;Seated Agrippina,&rdquo; dating to A.D. 1. It is one of the most famous of the Farnese collection and is the only known variant of a statue type created by the ancient Greeks. How any sculptor could imbue such expression and humanity into a hunk of rock, I&rsquo;ll never know.

Another statue to check out is &ldquo;Callipyge Aphrodite,&rdquo; a statue depicting a lovely and demure goddess of love whose name translates to &ldquo;Venus of the Beautiful Buttocks.&rdquo;

You can feel the history in the air at the Naples Archaeological Museum, and it&rsquo;s a great way to kill a few hours on a Saturday afternoon.

DirectionsThe museum is located at Piazza Museo 19, Naples 80135. If you t Take the Metro from Pozzuoli or elsewhere. The museum has its own stop, conveniently titled named Museo.Driving from the Navy&rsquo;s Capodichino base might be a bit crazy for those not used to driving in the city. But if you&rsquo;re up for it, head southwest on Calata Capodichino, crossing underneath the Tangenziale. Take a left on Piazza Ottocalli and continue on to Via Santi Giovanni e Paolo. Turn right on Via Giovanni Gussone, which will then morph into Piazza Carlo III, then Via Foria, then Piazza Cavour and finally Piazza Museo Nazionale. Just keep going straight unitl you hit it.

CostsAdmission is 9 euro for adults. Free for visitors 18 and younger.

FoodNo food on site, but like the rest of Napoli, a bevy of cafes and eateries are right outside the museum&rsquo;s doors.

InformationLog on to museoarcheologiconazionale.campaniabeniculturali.it for more information. There is an English language option, but it does not fully translate the site. Call 081-442-2149 for other details, but the staff might not speak English.