More to Bologna than sausage Buy Photo
This tomb, a copy of one that Crusaders found for Jesus Christ in Jerusalem, sits in San Sepolcro, one of seven churches of markedly different styles that form Santo Stefano. The tomb once housed the remains of the city's patron saint, San Petronio. The remains were transferred to the nearby basilica that bears his name. (Kent Harris/Stars and Stripes)

Buy Photo
This tomb, a copy of one that Crusaders found for Jesus Christ in Jerusalem, sits in San Sepolcro, one of seven churches of markedly different styles that form Santo Stefano. The tomb once housed the remains of the city's patron saint, San Petronio. The remains were transferred to the nearby basilica that bears his name. (Kent Harris/Stars and Stripes) 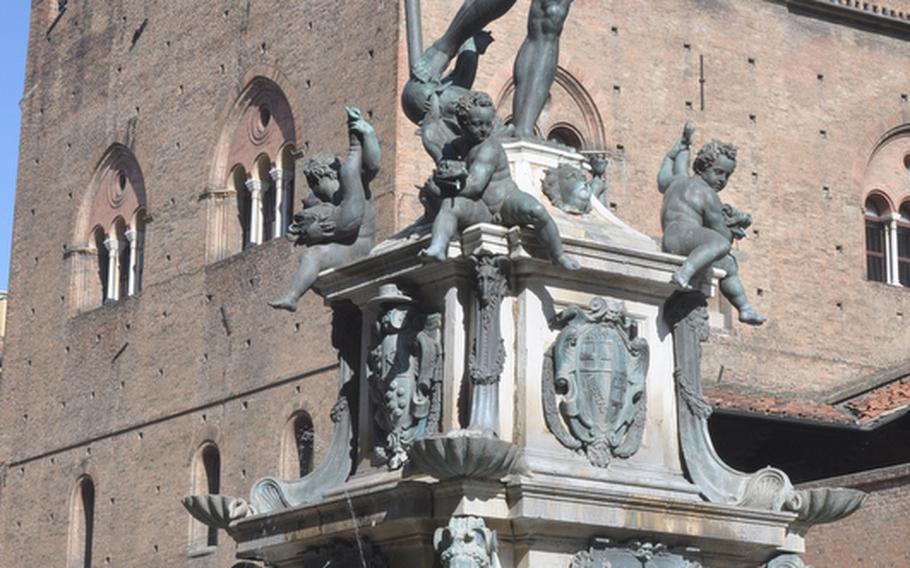 Buy Photo
Schoolchildren check out the Neptune Fountain, one of the landmarks of the city of Bologna, Italy. The statue that depicts the Greek god of the oceans and four mermaids in somewhat provocative poses was funded by the Vatican in the 16th century as part of a project to bring fresh water to people of the city. (Kent Harris/Stars and Stripes) 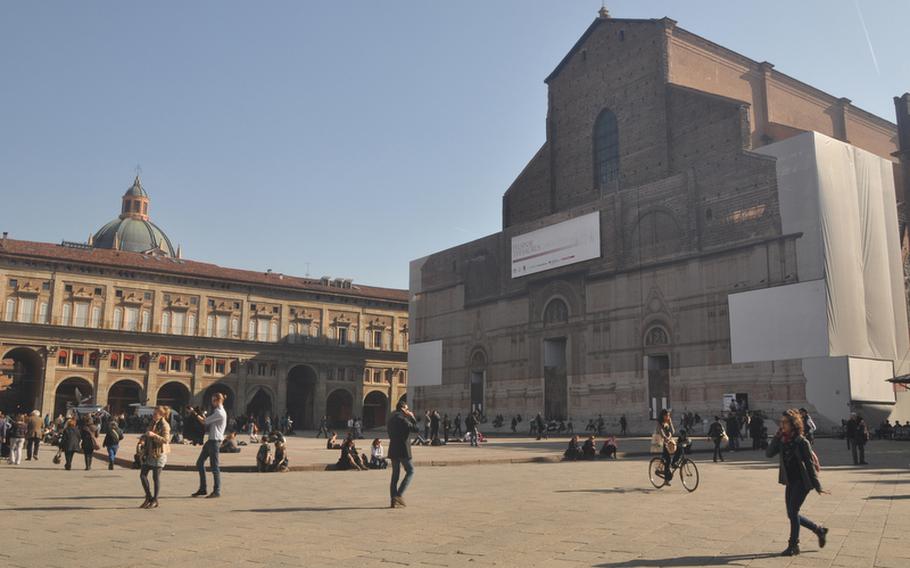 Buy Photo
Piazza Maggiore is the main square in Bologna. The facade of the red-brick Basilica of San Petronio, named after the city's patron saint, currently is undergoing restoration. The church was designed to be the largest in the world, but the Vatican funded a university building at the far end of the church while it was still under construction, ensuring it wouldn't be bigger than St. Peter's Basilica in Rome. (Kent Harris/Stars and Stripes) 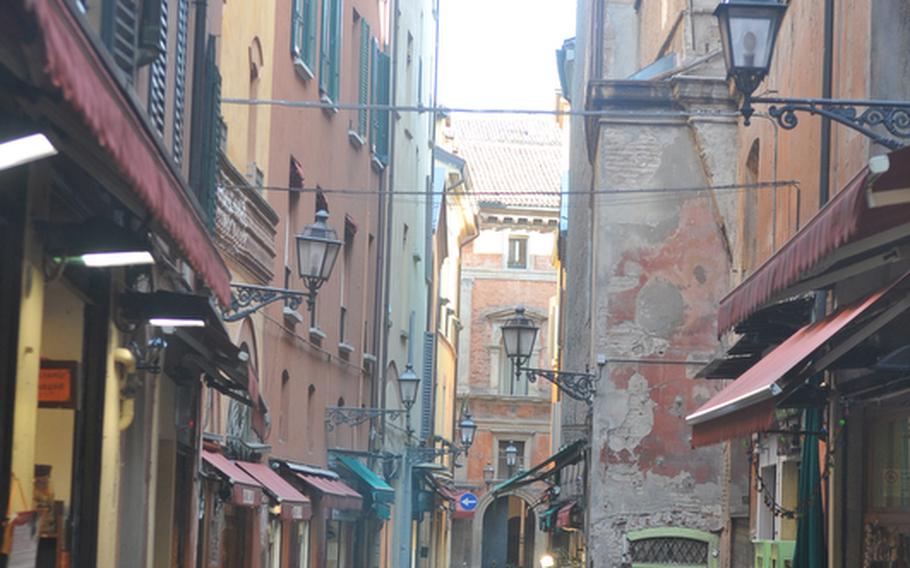 Buy Photo
Bologna is known for its porticoes, but not all its streets are wide enough to feature covered walkways. Fruits, vegetables and fresh food have been sold for centuries on this small street off Piazza Maggiore. (Kent Harris/Stars and Stripes) 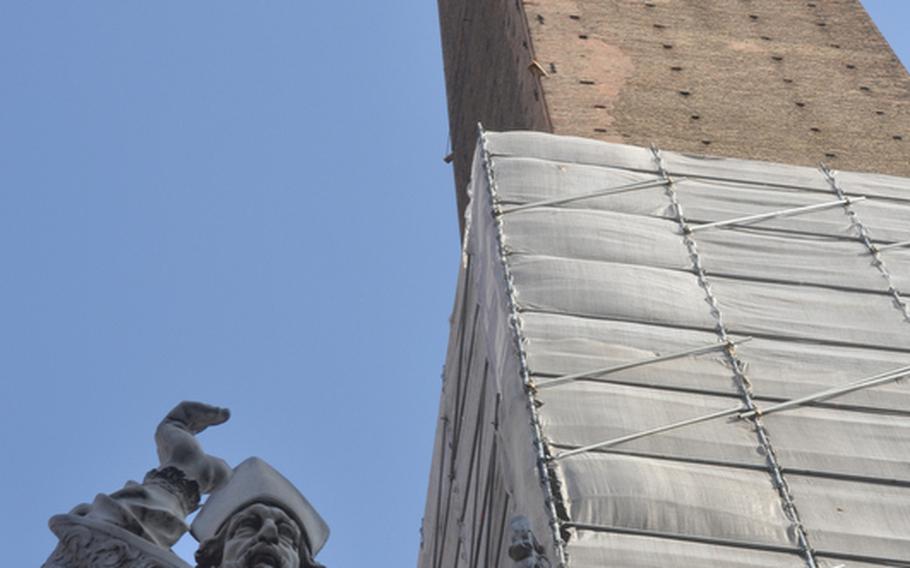 Buy Photo
A statue of San Petronio, the patron saint of Bologna, stands under one of the two towers that make up the city's most famous landmark. It's possible to climb up the Torre degli Asinelli, even though some of the exterior is currently under restoration. (Kent Harris/Stars and Stripes) Buy Photo
Powerful families once struggled for control of Bologna and - as in other Italian cities in the Middle Ages - one way of displaying their power was building towers. Many of Bologna's towers have disappeared, but the two most famous ones - Torre Garisenda, left, and Torre degli Asinelli, right, still stand. Torre Garisenda, the smaller tower, leans noticeably and is not accessible to the public. (Kent Harris/Stars and Stripes)

Bologna, the capital of Italy&rsquo;s Emilia-Romagna region, is known for many things, according to longtime resident and tour guide Carla Cesarani.

And also &ldquo;Bologna the Learned&rdquo; as the home of the world&rsquo;s oldest university, which churned out a bevy of medieval lawyers.

But it&rsquo;s probably best known to Americans as one of the cities between Venice and Florence, or a place that sounds a lot like something produced by Oscar Mayer.

Both of those are true. Bologna sits about halfway between those two popular tourist destinations, but doesn&rsquo;t draw nearly as much attention.

And bologna is the Americanized version of mortadella, a pork sausage that&rsquo;s among the many things for which Bologna is famous.

Several other famous attractions are located in or near the main square, Piazza Maggiore.

The Fontana del Nettuno (Neptune&rsquo;s Fountain) draws attention for the Greek god standing on top and the four mermaids displaying their assets beneath it. Historians say it was controversial when it was unveiled in the 16th century, especially since it was funded by the Vatican. But what often goes unsaid, according to Cesarani, is that it was part of an aqueduct system designed to bring clean water for the local population, something that was in short supply at the time.

Bologna, one of a number of cities ruled for years by the Vatican before Italy became a unified country, could have boasted the largest church in the country. But the pope reportedly decided that Basilica San Petronio shouldn&rsquo;t be bigger than St. Peter&rsquo;s in Rome. He ordered a university building be built at one of end of the church, so the basilica couldn&rsquo;t be completed as planned, Cesarani said. Some say that the construction of the university in 1565 also served to allow the Vatican more sway over the students and their studies. Previously, classes were held all over the city.

Napoleon shifted the university to the northeast when he took over the city in the late 18th century. But some facilities still are open to the public today. Note the student crests all over the exterior and interior of the main building and a wood-paneled room inside where dissections used to take place.

Before Napoleon arrived, Bologna was already famous for towers &mdash; the product of a &ldquo;can you top this&rdquo; competition among powerful families in the Middle Ages. The two most famous, known today as the &ldquo;Due Torre,&rdquo; are only a few blocks from the main square. The tallest, Torre degli Asinelli, has been standing about 1,000 years. Its companion, Torre Garisenda, looks like it&rsquo;s ready to fall over any day.

There&rsquo;s an array of smaller churches and museums nearby &mdash; most of them within a short walk of Piazza Maggiore &mdash; too short to burn off all the calories offered in the numerous fine restaurants across the city.

DIRECTIONSBologna is about a 90-minute drive southeast of Vicenza and about a three-hour drive south of Aviano. Taking a train is a good option. It takes just a bit longer than driving and probably costs about the same, once road tolls, gasoline and parking fees are taken into account.

TIMESMany attractions close for lunch and schedules change depending on the seasons. So be flexible and prepared to visit the next site on your list.

COSTSRound-trip train tickets from Vicenza or Pordenone near Aviano cost 37 or 38 euros, but it&rsquo;s possible to pay much less if you&rsquo;re flexible on travel times. A round-trip ticket from Vicenza can run as low as 11 euros. Similar trains from Pordenone cost 15 euros.

FOODThough Italians elsewhere would likely argue, Bologna is widely considered Italy&rsquo;s culinary capital. Mortadella, the local ham, somehow morphed into bologna in the U.S. Parmesan cheese (from Parma) and balsamic vinegar (from Modena) dominate the ingredients in Bologna&rsquo;s dishes. Bologna claims to have been the first to produce tortellini. Restaurants are numerous and many are considered top-notch. It&rsquo;s much cheaper to dine in them for lunch than for dinner.